Marketing experts discuss how brands like Coke, Visa and Adidas must navigate an event that’s run the controversy gamut, from allegations of human rights abuses to the host country’s stance on homosexuality 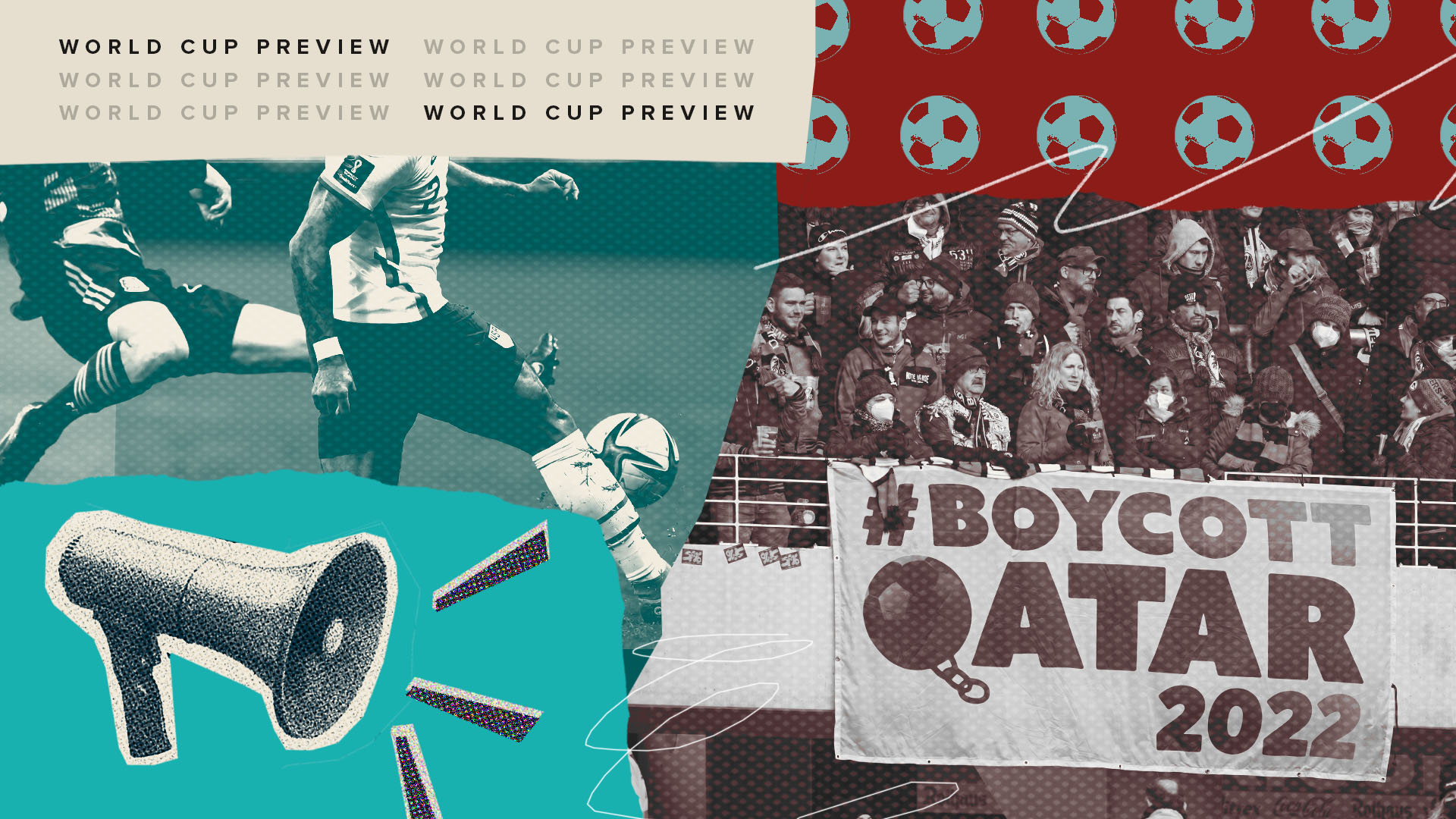 The FIFA World Cup remains an unrivaled sponsorship opportunity for blue-chip corporations, thanks to the tournament’s fan passion and diverse viewership. This year’s event in Qatar, however, is riddled with controversy: allegations of human rights abuses, concerns over bidding corruption and the country’s laws against homosexuality. Most global sporting events have controversies of some kind — this one has more, and arguably bigger, ones than normal.

“Regardless of where you call home, be very prepared to face potential backlash from consumers,” said Harold Reid, vice president of communications and strategy at Authentique Agency, an Atlanta-based integrated marketing agency, of companies that follow through with World Cup sponsorships. “The question you have to ask as a brand is: ‘Is it all worth it?’”

A new Morning Consult survey indicates self-identified soccer fans in the United States generally support brands sponsoring the 2022 men’s FIFA World Cup, which runs Nov. 21 to Dec. 18 in the Gulf state of Qatar. Among generations, millennials had the highest level of brand support at 30%, while Gen Xers had the lowest at 20%.

The research suggests World Cup viewers may not necessarily penalize brands for participating in the event. Support, however, isn’t overwhelming, and majorities of soccer fans also said they’d support brands pulling out of the games over the controversies. It’s a deeply precarious position companies will find themselves in come November.

The unrivaled marketing appeal of the FIFA World Cup

Short of the Olympics, there is nothing quite like the World Cup. Adam Lippard, chief partnership officer of the U.S.-based experiential marketing and sponsorship agency GMR Marketing, whose portfolio has featured World Cup sponsors, said FIFA is the sports and entertainment property that “engenders the most fan passion, hard stop.”

In 2018, a record-setting 3.5 billion people watched the men’s FIFA World Cup in Russia, while more than 1.1 billion viewers tuned in live to watch the final between Croatia and France, according to data published by FIFA. The average live audience across the 64 matches was 191 million people, FIFA said.

“This is a moment in time where there’s the most heightened awareness and the most fans are aware of soccer, paying attention at a level that only happens every four years” for the men’s World Cup, said Brian Quarles, chief creative officer and resident soccer expert at rEvolution, a Chicago-based independent and integrated sports marketing agency that has worked with MLS sponsors and CONCACAF, the governing body that oversees North America, Central America and the Caribbean.

To accommodate corporations’ varying degrees of interest, FIFA announced a restructuring of its commercial business in 2021, the first such change in eight years. After this 2019-22 commercial rights cycle ends, brands will have more flexibility to align themselves with specific FIFA verticals, including men’s soccer, women’s soccer and esports, rather than the entire FIFA portfolio. In total, there are 10 different commercial packages.

Seven companies are designated as a World Cup FIFA partner, the organization’s highest commercial tier, including Visa Inc., Adidas AG, Coca-Cola Co., Dalian Wanda Group, Hyundai Motor Co., Qatar Energy and Qatar Airways. Some of the corporations within FIFA’s lower sponsorship tier include McDonald’s Corp., Anheuser-Busch InBev and China-based electronics and home appliances company Hisense. For all of them, a relationship with FIFA has, at least thus far, been well worth any headaches.

In December 2010, then FIFA President Sepp Blatter named Qatar as the host nation for the 2022 World Cup, a decision met with widespread criticism. Qatar, a tiny country with little existing infrastructure to host the tournament, was accused of bribing FIFA officials to secure votes for Qatar and mistreating migrant workers and other human rights transgressions, which have clouded Qatar’s winning bid.

In addition, homosexuality is illegal in Qatar, though officials have claimed all will be welcome to the country during the cup, in accordance with FIFA’s inclusion policies. Some gay soccer players have said they wouldn’t feel safe traveling to Qatar for the tournament.

Some marketers argued Qatar is not an outlier. Russia, the host of the 2018 men’s World Cup, received rampant backlash ahead of the event, including concerns of hooliganism, homophobia and racism throughout the country.

Four years earlier, Brazil saw protests around its expensive World Cup, leaving behind unused costly stadiums and tens of thousands of displaced Brazilians. Some estimates pegged the tournament between $11 billion and $14 billion in cost.

“The reality is there is no such thing as a perfect host for any event,” said Ricardo Fort, founder of Atlanta-based Sport by Fort Consulting, and a former senior executive leading sponsorship at both Visa and Coca-Cola. Fort, whose work has connected him to the World Cup for nearly 25 years, noted that FIFA sponsors do not participate in selecting the host city.

Survey conducted April 1-4, 2022, among a representative sample of 2,210 U.S. adults, with a margin of error plus or minus 2 percentage points. Figures may not add up to 100% due to rounding.

When respondents of the survey were asked if their opinion of FIFA sponsors changed after having knowledge of Qatar’s controversies, a majority said yes. Eighty-seven percent of soccer fans had a favorable opinion of Visa prior to being asked about the controversies, but that figure dropped to 78% after respondents were presented with more information about Qatar’s underlying issues and asked about Visa again. Similarly, 77% of soccer fans viewed Coca-Cola favorably before the share dipped 6 percentage points after respondents read more information related to the country’s controversies.

“Any brands that are advertising or sponsoring have to assume the risk that comes along with their financial support,” Reid said.

According to the survey, net support among soccer fans for brands pulling out of the Qatar World Cup (the share of those who supported minus the share who opposed) was at least plus-34 for across three separate issues: reports of human rights abuses among migrant workers, reports of FIFA officials being bribed and concerns about state laws against homosexuality.

Net support for World Cup advertisers pulling out of Qatar over the following issues:

“Being on the ground for that event, period, is a PR mistake unless you absolutely know your core audiences don’t care about the issues,” said Erik Bernstein, president of Denver-based Bernstein Crisis Management, which consults with team owners and league counsel in professional sports.

The tournament also marks the first time FIFA will stage the World Cup in the Middle East and Arab world — a more difficult destination for travel purposes — as well as the first time the event will occur in the northern hemisphere’s winter months.

For Americans, the condensed 28-day tournament will run through Thanksgiving, and concludes a week before Christmas, leaving marketers with questions around how to leverage their FIFA sponsorship and maximize their investment, both in Qatar and outside the host state.

“The long sunsetting of the COVID pandemic is continuing to have an influence and an impact on global events,” added GMR’s Lippard, who, along with other marketers interviewed, highlighted the uncertainty of what the Russia-Ukraine war will look like in seven months. “It really becomes a Rubik’s cube of decisions and outcomes.”

CJ Bangah, principal at PwC U.S. and one of the global consulting firm’s advertising leaders, cited some consumers’ concerns about booking international travel with the possibility of more coronavirus variants emerging in the future. Multiple executives argued that since Qatar isn’t a major commercial market for numerous FIFA sponsors, brand executives may redirect some of their traditional activation and marketing budgets for the host city toward different areas, such as nearby countries like Saudi Arabia and United Arab Emirates. Corporate hospitality and entertaining clients is another major variable, some said, especially with this year’s World Cup now in the calendar’s fourth quarter.

In spite of the controversies and the date change, fan interest and ticket demand for the cup hasn’t waned. In the first 24 hours of the initial sales cycle, more than 1.2 million tickets were requested, including over 140,000 tickets for the Dec. 18 World Cup final. Fans requested 17 million tickets over the course of the first sales period, a 20-day window that concluded in February.

Will companies speak out on Qatar’s state policies?

Jamie Baxter, partnership director at SPI Marketing, a New York-based gay marketing firm, argued the World Cup could “put brands in a public relations trap.” According to Baxter, today’s consumers have voiced their opinion and want brands to be vocal and lean into their culture and DNA. According to the Morning Consult survey, soccer fans’ support for brands speaking out on the various World Cup controversies varied:

Instead of statements, some marketers said brands must first determine their company ethics and values before deciding why, how and when to act.

Reid, of the Authentique Agency, also asked corporations to question whether they have already supported “the full spectrum of human rights,” both domestically and globally. If not, he said, then companies must re-examine their corporate social justice and responsibility efforts to ensure they align with their marketing efforts.

Baxter advised brands, should they choose to speak out during the World Cup, to begin a multifaceted and cross-platform marketing approach now that makes it easier to insert themselves into the conversation in November.

“Those brand marketers responsible for investing their dollars and deciding where to invest their messages have to do a 360-degree inspection of risk and opportunity,” said Bob Witeck, president of Washington, D.C.-based Witeck Communications, a company specializing in LGBTQ+ marketing. “This is a lot deeper than it used to be. These things cannot be a checklist.”

SPI Marketing executives hypothesized that based on Qatar’s smaller-market appeal, brands could be comfortable with more aggressive messaging around the event. (Some brands, by contrast, were hesitant to risk upsetting the all-important Chinese market during the 2022 Winter Olympics in Beijing.) Some suggested brands should even refrain from using the word “Qatar” in marketing and on social media because of the negative sentiment it could elicit.

PwC’s Bangah said that in instances where local preferences and behavior are “incongruent with a global audience,” like in Qatar, brands “may want to distance themselves from some of those elements and reinforce messages around the global relevance and inclusivity” of the World Cup.

People at SPI Marketing collectively said the bigger opportunity is for brands to demonstrate some support toward inclusivity and diversity via creative marketing. Ultimately, SPI CEO and founder Scott Seitz said, corporate America “doesn’t want to stick their neck out that much.”