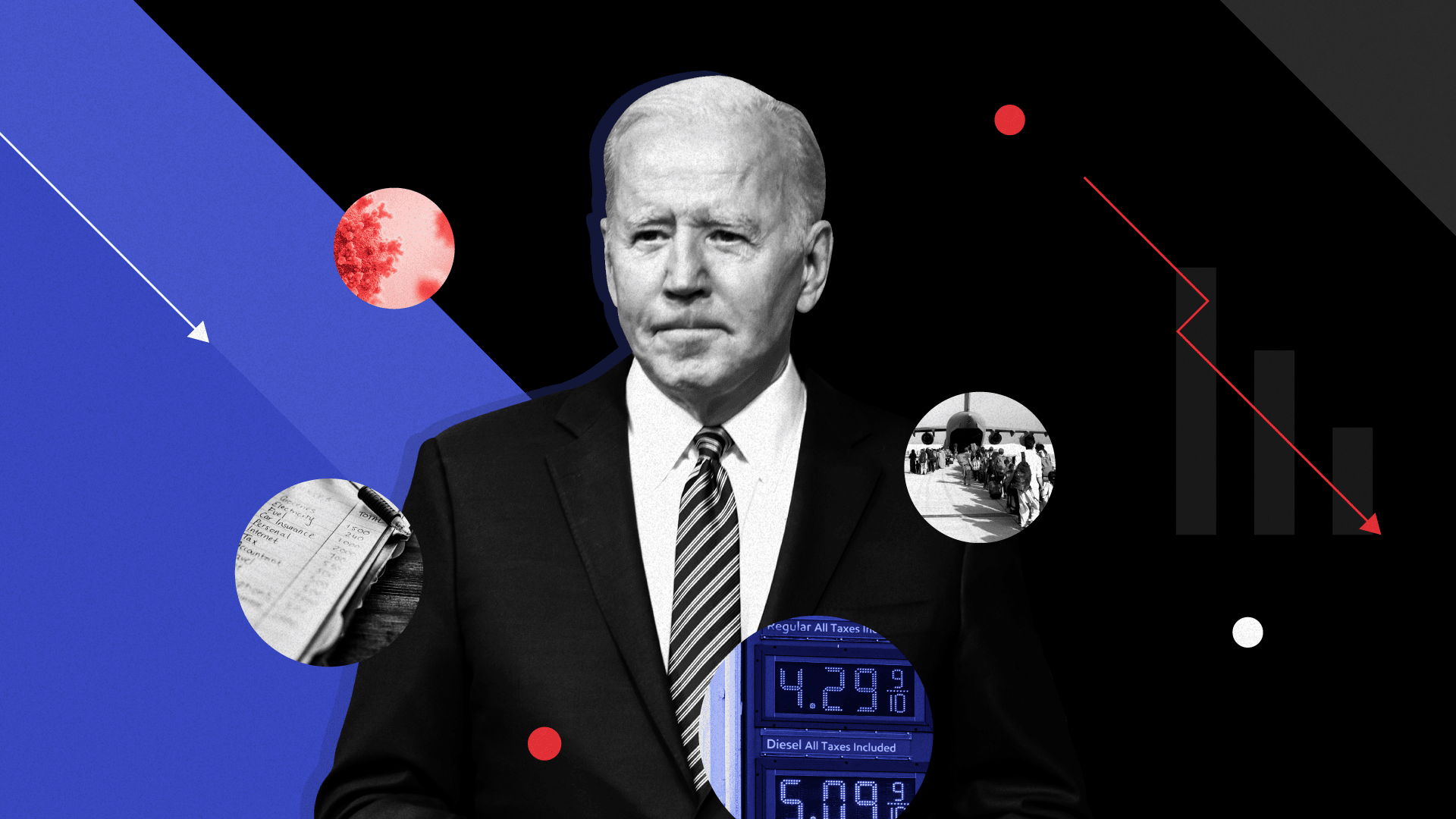 Perceptions of President Joe Biden’s job performance worsened across most of the country in the first quarter of this year, deepening the challenges for his party in key states ahead of this year’s midterm elections that largely overlap with the 2024 presidential map.

According to Morning Consult Political Intelligence quarterly tracking in all 50 states, more voters now disapprove than approve of Biden’s job performance in 40 states, following double-digit declines in his net approval rating — the share of voters who approve minus the share who disapprove — since he took office in January 2021.

Biden is underwater by double digits in 33 states, from conservative enclaves such as West Virginia and Wyoming, to battlegrounds that were pivotal to his 2020 victory, such as Arizona, Pennsylvania and Georgia.

In just 10 states and the District of Columbia do more voters approve than disapprove of Biden’s job performance, though even those spreads have shrunk dramatically since the end of the first quarter of 2021.

Even in Biden’s home state of Delaware, which he won by nearly 20 percentage points in 2020 and where voters had previously elected him to seven terms as their senator, voters are closely divided over his job performance. Half of First State voters approve of Biden’s job performance, down from 62% at a similar time last year, compared with 45% who disapprove, up from 32%.

If there’s a silver lining for the president, it’s that in most states, the pace of his decline slowed between the last quarter of 2021 and the first quarter of 2022. But that might not provide much solace for Democrats in key states in this year’s elections, or for his party looking to place itself on good footing ahead of the 2024 presidential election.

Biden’s net approval rating has dropped by more than 20 points over the past year in all of the states hosting hotly contested Senate races or competitive House races this fall that are also set to feature prominently in 2024.

Even in Colorado, which Biden won by nearly 14 points in 2020, more voters disapprove of him than approve, 49% to 47%. It’s similar to his standing in Virginia, where his downturn among self-identified suburbanites helped hand Republican Glenn Youngkin the governorship 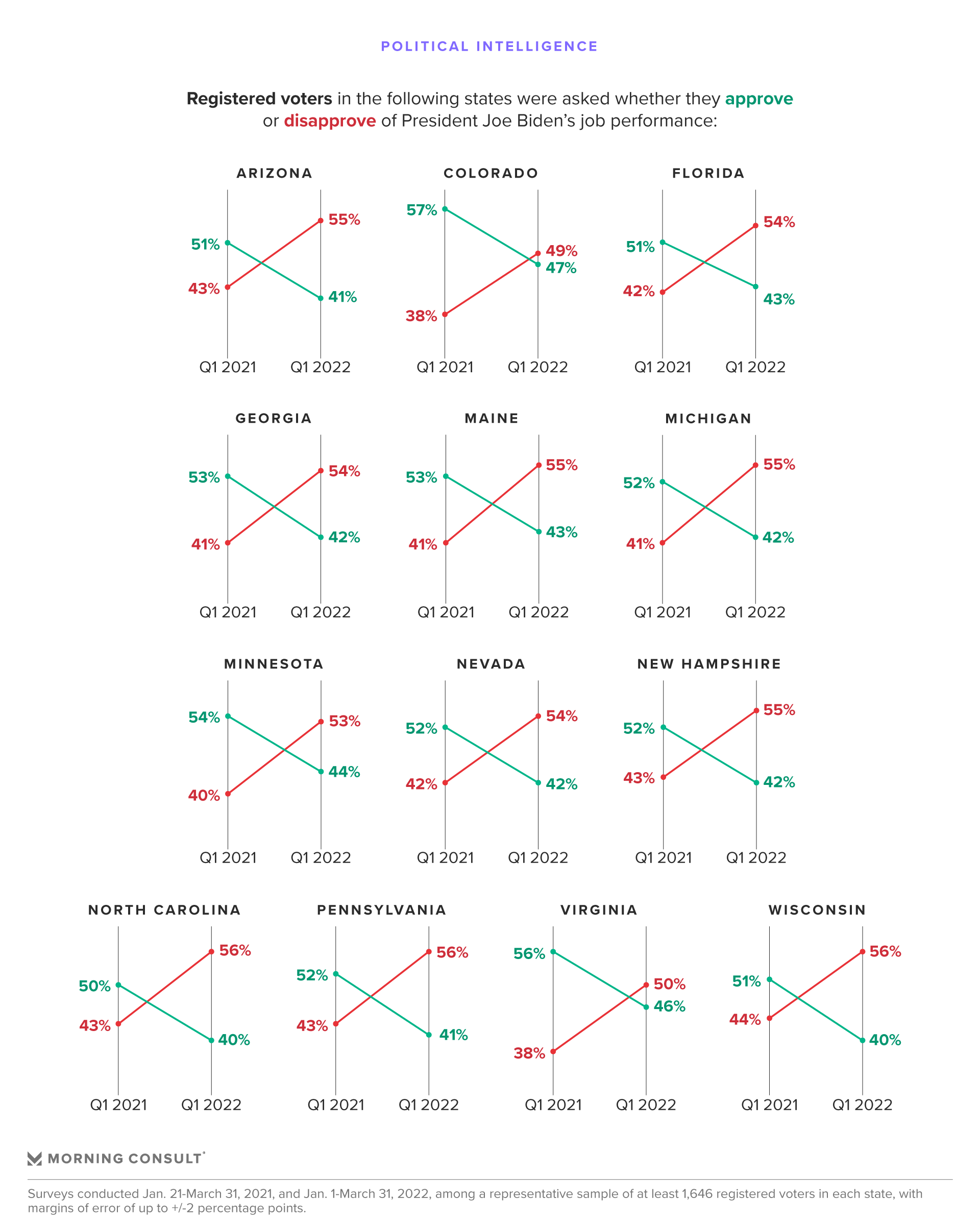 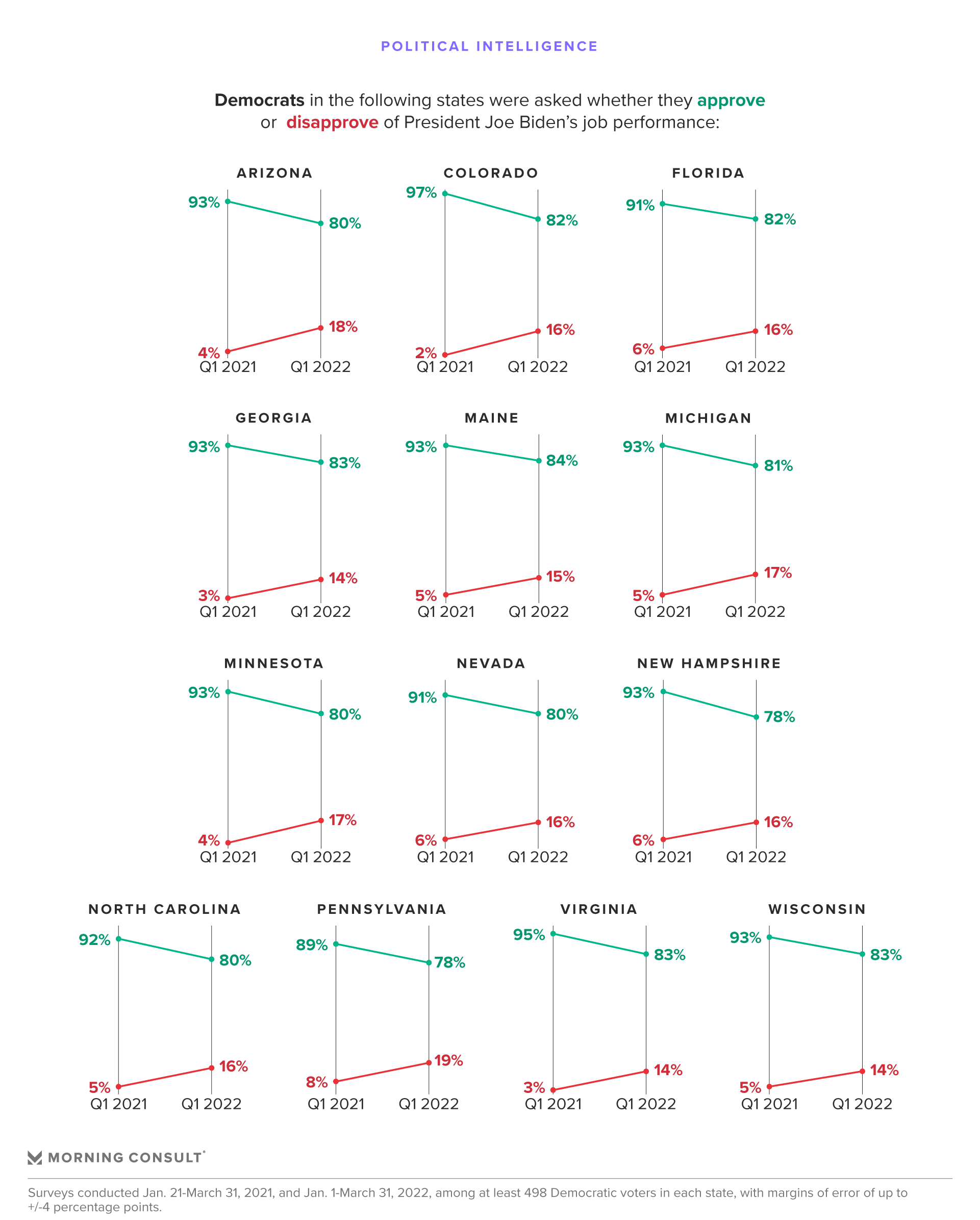 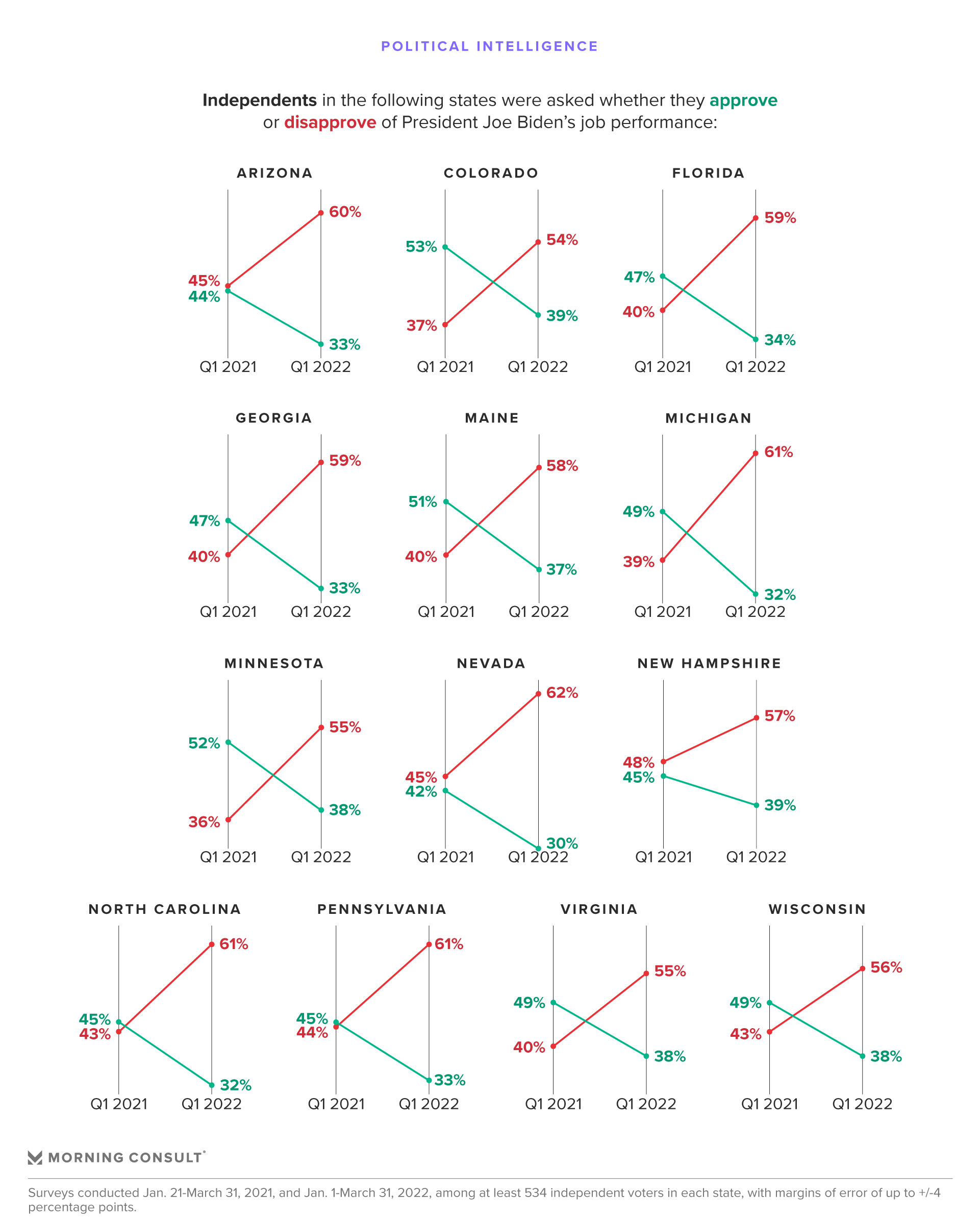 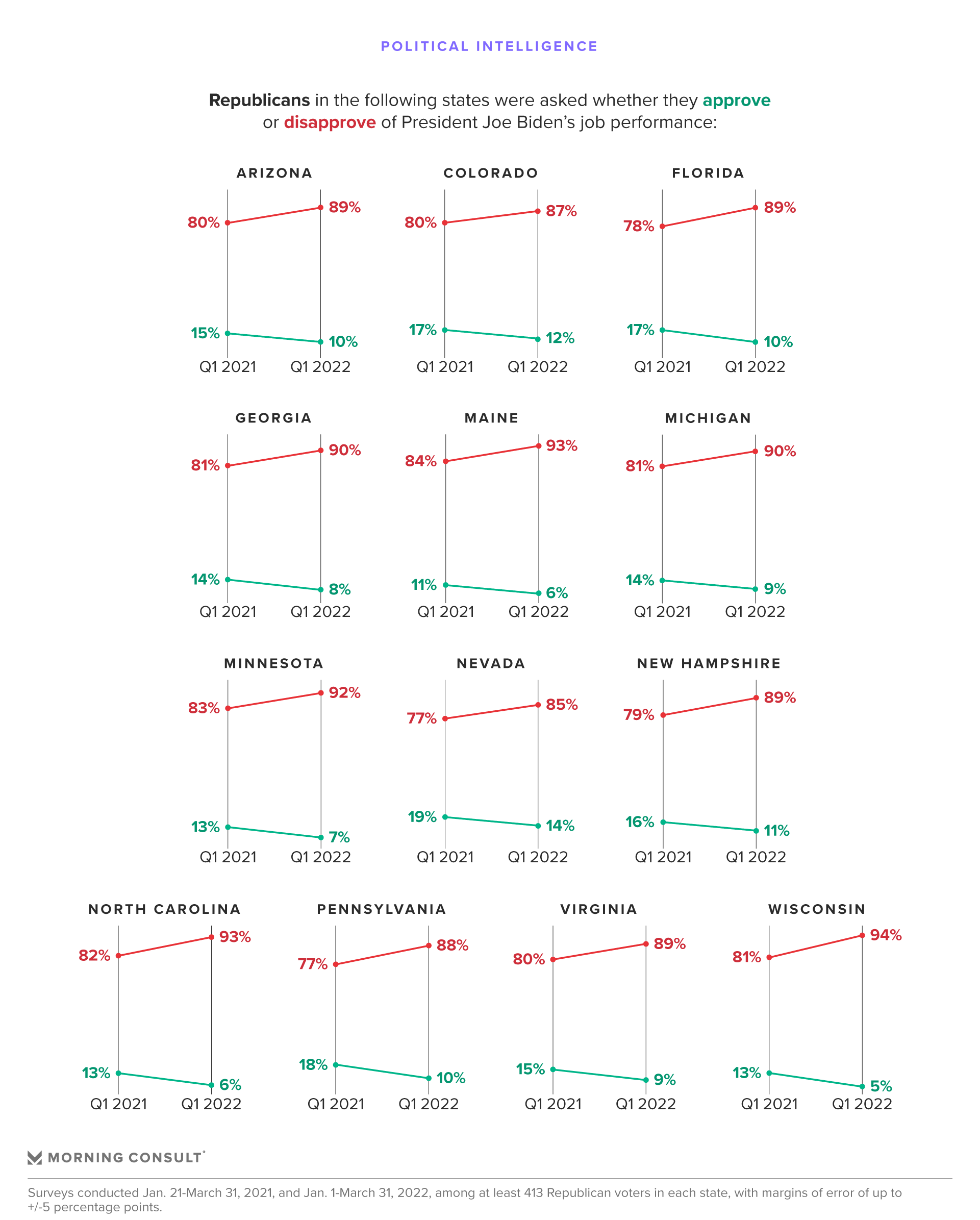 Voters of all stripes in key states have soured on Biden since he took office last year, but the attrition has been most severe among independents. Except for in Arizona and New Hampshire, the president has seen sharper declines among unaffiliated voters than any either partisan group.

The bleeding has been worst in Michigan, a state Biden won by less than 3 points in 2020, where his net approval rating has dropped by 38 points among independents — larger than the 33-point declines that have pulled him underwater with independents in Georgia and Minnesota.

Across the country, Biden is weaker among Democratic voters than he was a year ago. In 22 states, the president’s intraparty approval rating is at 80% or less, compared to just one — West Virginia — early on in his term.

That decline has hit the Democratic Party’s standard bearer especially hard in New Hampshire, where his approval rating has fallen from 93% to 78% among Democrats, and Colorado, where his backing dropped from 97% to 82%.

Particularly in New Hampshire, where Democrats are working to hold Maggie Hassan’s Senate seat, two congressional districts and take back the Governor’s Mansion, Biden’s base erosion is driven by the party’s youngest voters, those under 45. 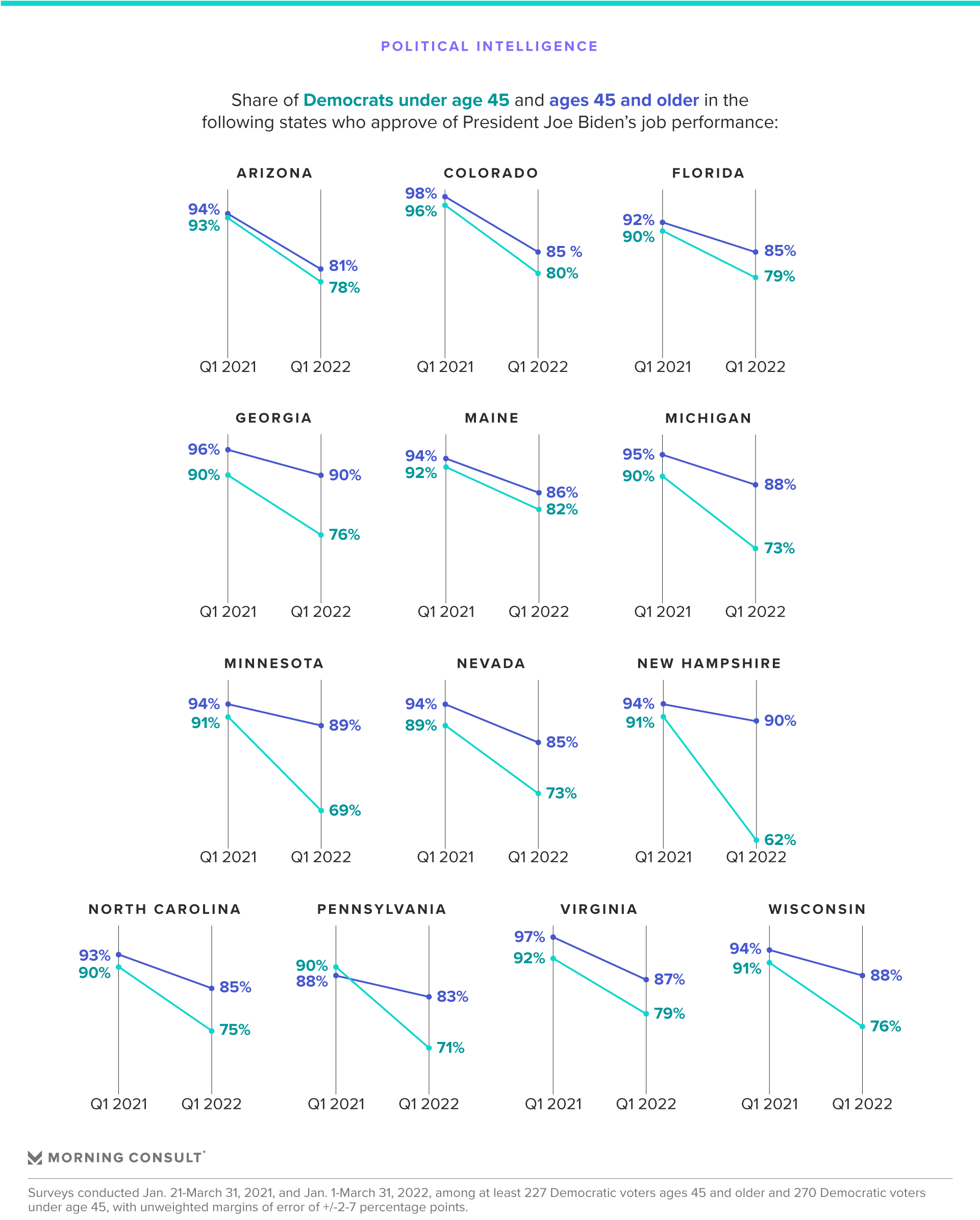 In the Granite State, Biden’s approval rating among younger Democrats has dropped from 91% to 62%, compared with a 4-point decline among those 45 and up. A similar effect was observed, albeit to a smaller degree, in Minnesota, Pennsylvania, Michigan, Georgia, Wisconsin, North Carolina and Nevada.

In Maine, Florida, Virginia, Arizona and Colorado, Biden’s drop was more uniform across the age divide, though he remains more popular among older voters in all 13 states.

While older voters are traditionally more reliable to show up to the polls, the nosedive among young voters in these key states could spell trouble for the party’s enthusiasm, as the surveys show the strength of Biden’s Democratic support has declined significantly over the past year.

Margins of error for responses from all voters in each state range from 1 to 5 points. For more detailed information, you can download the 50-state dataset for Biden’s approval ratings among all voters here.