Dogs and Disney: Sports ‘Theme Nights’ Are a Crucial Tool in Bringing Crowds Back After COVID 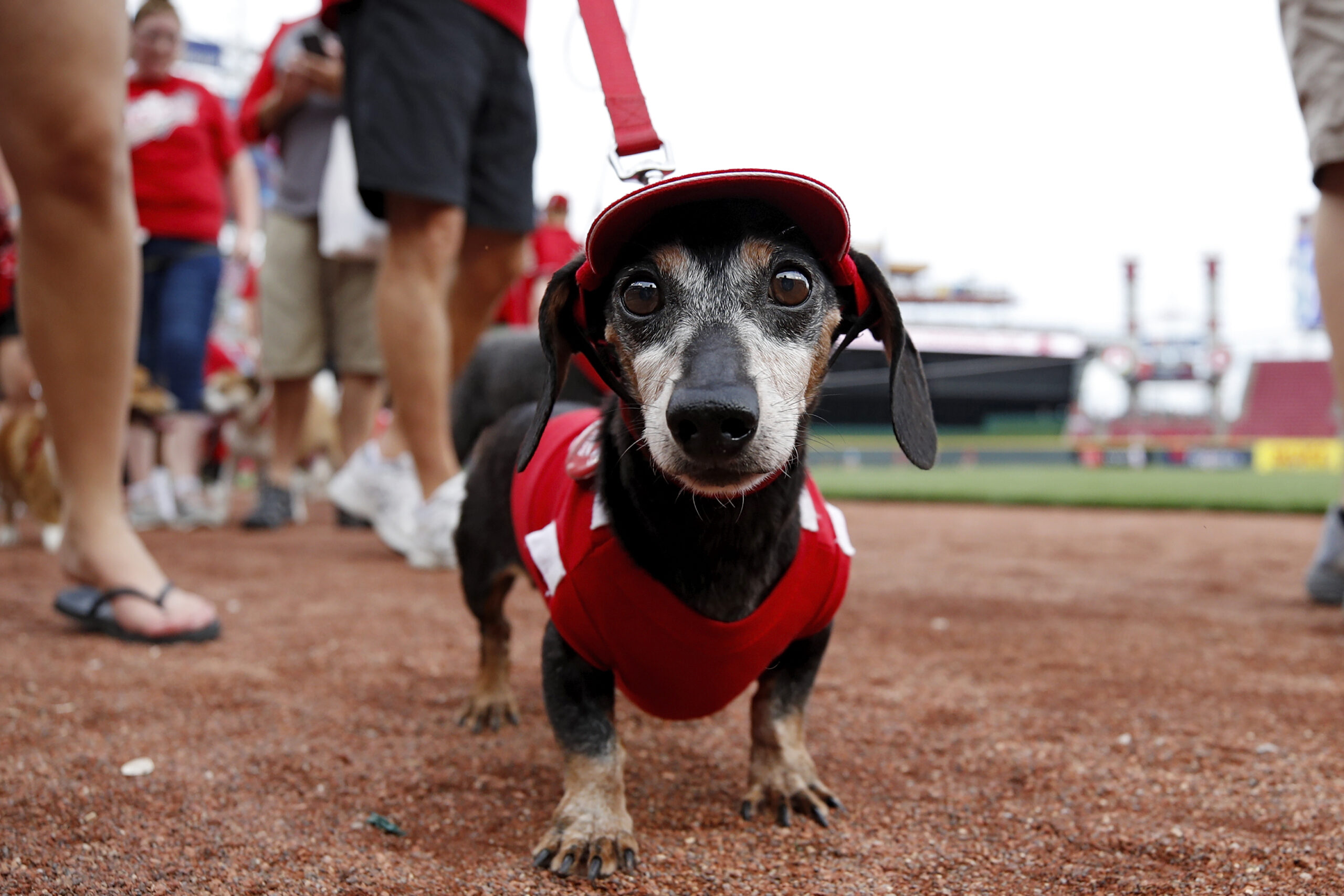 "Bark in the Park" games are among the most popular theme nights sports teams are offering as a way to sell tickets post-COVID. Nearly half of sports fans said they're interested in participating in a dog night. (Photo by Joe Robbins/Getty Images)
By Mark J. Burns

As sports teams and organizations look to lure fans back to stadiums following the worst of the coronavirus pandemic, they’re turning to something that even fans of rival teams can agree are worth the price of admission: dogs.

For some franchises, theme nights — which run the gamut from these fan-favorite Dog Nights to cultural appreciation days — account for around 15% to 20% of total group sales across most major sports, according to industry executives. The New York Mets, for example, attributed over 100,000 tickets sold each season to theme nights, which Andy Goldberg, the team’s executive vice president and chief marketing officer, described as “vital” to the franchise’s group sales efforts.

But a boost in ticket sales is not the only reason marketers, sales and sponsorship executives decide to dot their teams’ calendars with the likes of Pride Night, NASCAR Day, Star Wars Night, Top Gun Day or Hispanic Heritage Night. They can also promote diversity and inclusivity among their fan bases, help a brand reach a new audience and recognize a charitable cause, all while providing additional entertainment value for customers.

New Morning Consult data found that 56% of self-identified U.S. sports fans are familiar with the concept of themed nights, with 37% saying they have attended such a game at least once. Among generations, Gen Zers were most familiar with theme nights at 62%, while baby boomers were the least aware at 35%.

“We view the impact of theme nights as not necessarily just being the tickets and the revenue that they drive on that particular night, but more so the engagement with the community, engaging new audiences and just diversifying the game experience,” said Nicole Freeman, the NBA’s vice president of team, marketing and business operations.

When the NHL releases its regular-season schedule in the summer, marketers Jillian Frechette and Amanda Tischler begin to determine where their respective teams’ theme nights will fit into the typical 82-game slate.

“We’re just trying to figure out how to almost play Tetris with our calendar, overlaying those theme nights,” said Frechette, senior vice president of marketing for the New Jersey Devils.

After months of preparation, both Frechette and Tischler, vice president of marketing for the Washington Capitals, which attributes 40% to 50% of group tickets sold in any given season to themes, start to piece the puzzle together. Colleagues across other professional sports leagues said they’ve encountered a struggle to decide which themes to pick.

“We want to be very selective with not doing too many theme nights because then it takes away a little bit of the panache from your typical experience,” added Gregg Allen, chief revenue officer for Sporting Kansas City, which has seven theme nights scheduled out of the MLS team’s 17-match regular season.

Complicating matters is the belief among executives that many theme nights require an “all-in” mentality. Some involved described a time-consuming approach that includes a thematic game-day presentation and in-venue experience, creative digital campaigns for social media and an overall robust marketing strategy needed to create the desired effect with fans. All of that, of course, requires money and labor.

That’s coincided with an ongoing conversation across leagues surrounding staffing resources, budget constraints, fixed expenses and opportunity costs, executives said. Even if teams wish to fill their home calendar with more theme nights, it might not be feasible.

“That’s a constant struggle to find that right balance of breaking up the monotony of a 41-game regular season and also not burning out your staff,” said Mike Forman, chief marketing officer for the NHL’s Carolina Hurricanes.

Forman estimated about 1 in 5 group tickets sold are related to a theme night. Some games, like Carolina’s Stars Wars Night, are successful each season, making it difficult to eliminate from the calendar. Forman admitted the organization has at times wanted to distance itself from Star Wars, but, “the proof is in the pudding.” More than 2,000 ticket packages are sold each season for the annual game, he said, good for No. 1 among the Hurricanes’ theme nights.

This past regular season, the NBA’s Milwaukee Bucks held more than a dozen themed nights, including Pride Night and Greek Night, in honor of Greek-born brothers Giannis and Thanasis Antetokounmpo. Dustin Godsey, the Bucks’ chief marketing officer, said the two games were staples, in addition to the Midwest Athletes Against Childhood Cancer (MACC) Fund Game, which moved from the preseason to the regular season for the first time this year.

The Bucks sold out of full-season ticket memberships this season for the first time in team history, so the franchise had limited ticketing inventory to sell. Consequently, the Bucks viewed theme nights more as a way to add entertainment value and “make a memorable night for fans,” Godsey said.

The smaller-market Hurricanes, meanwhile, altered their strategy. Five years ago, Carolina aimed to turn a Friday or Saturday night near-sellout “good crowd” into a “great crowd” by attaching a theme night, Forman said.  Now, in part because of the team’s on-ice success, weekend games are already near capacity, so the Hurricanes decided to place some theme nights during games the team expected would otherwise draw a smaller crowd, such as midweek games or ones against bad teams.

“We’re trying to make 41 games big, as opposed to focusing on making those 10 to 12 games really big,” Forman said.

Roughly 2 in 3 sports fans (67%) said they would be “very” or “somewhat” interested in participating in a Charity Night, according to the survey, the highest share of any theme night among those surveyed.

Respondents were asked how interested they would be in participating in the following theme nights at a sporting event:

Survey conducted April 15-17, 2022, among a representative sample of 2,210 U.S. adults, including 1,466 self-identified sports fans, with margins of error of plus or minus 2-3 percentage points, respectively.

Earlier this month, the NBA’s Orlando Magic hosted an ASL/Deaf Awareness Night and more than 1,000 people bought tickets because of it, according to Freeman, who added that more than 900 of those attendees were first-time buyers of Magic tickets.

Games that celebrate local heroes tend to outperform projections, Freeman said. Sporting KC hosts their own version of Military Appreciation Night called Sporting Salutes. Camouflage nets are set up around Children’s Mercy Park, vehicles from the five branches of the U.S. military are parked on the stadium’s plaza and pilots from nearby Whiteman Air Force Base perform a pre-match flyover. Each year, Sporting KC recognizes a different military group, including Gold Star families and Purple Heart award recipients, Allen said, and those honorees are treated to a premium matchday experience.

“It’s authentic, and it really lands,” Allen said. “It’s not just, ‘Hey, here’s a ticket offer, and we’re going to call it something.’ There’s not one person who walks on the property and doesn’t know it’s Salutes night.”

In the final week of the NBA’s regular season, more than 25 teams hosted Fan Appreciation Nights, which often include a team or sponsor giveaway for attendees. According to Morning Consult data, 3 in 4 sports fans said they would expect a promotional or giveaway item, such as a bobblehead or T-shirt, if they attended a themed sporting event.

This season marked the first year that the NBA league office supported the Fan Appreciation Nights, promoting the games on social media and sending targeted email campaigns to fans, according to Freeman, who said all of the games were “pretty much sold out.”

“It’s like giveaways on steroids throughout the game,” the Capitals’ Tischler said of Fan Appreciation Nights.

Respondents had mixed opinions on whether teams should host more theme nights focused on inclusivity, such as Pride Night celebrating LGBTQ+ fans. Of any generation, Gen Zers held the most support (45%), while baby boomers were the least supportive (11%). Only about 1 in 4 sports fans (24%) supported teams hosting more inclusive-themed games.

Respondents were asked if teams should host more, fewer or the same number of nights focused on inclusivity at sporting events

Survey conducted April 15-17, 2022, among a representative sample of 2,210 U.S. adults, including 1,466 self-identified sports fans, with margins of error of plus or minus 2-3 percentage points, respectively.

While research suggests a relative lack of support for pro sports teams adding more inclusive nights compared to Charity and some other theme nights, teams within the major U.S. pro sports leagues have continued to host Pride Nights and Cultural/Heritage Nights. In some cases, they’re among the most-attended, executives said.

As part of the NHL’s Hockey is for Everyone initiative, the Devils stitched together a five-game home series this season for Hispanic Heritage Night, Lunar New Year, Pride Night, Black History Month Night and Gender Equality Night. Before each game, the Devils worked with an alumnus, player or local artist to design custom player warm-up jerseys tied to the theme which were then auctioned off, bringing in $75,000 for the Devils Youth Foundation.

The New York Mets have seven similar games, including Japanese Heritage Night, Celebrate Israel and Juneteenth, scheduled this season. Morning Consult data found that Gen Zers was an outlier compared to other demographics in the survey, as 69% of the cohort said they would be “very” or “somewhat” interested in participating in a Cultural Night, the highest among all demographics.

In 2016, the Mets became the first New York-area pro sports team to host Pride Night at Citi Field, which has since become an annual game. During the most recent regular season, two-thirds of NBA franchises held a Pride Night, Freeman said.

Shelly Wilkes, senior vice president of marketing and social responsibility for the Orlando Magic, said heritage and cultural theme nights like Indian Day and Faith and Family Night are among the NBA franchise’s best-performing events.

“Our teams are the fabric of their cities,” Freeman said, “and so we encourage teams to really have theme nights that celebrate those various segments because that just further shows the team values everyone in that city, and that the love of the team is a point of unity for everyone.”