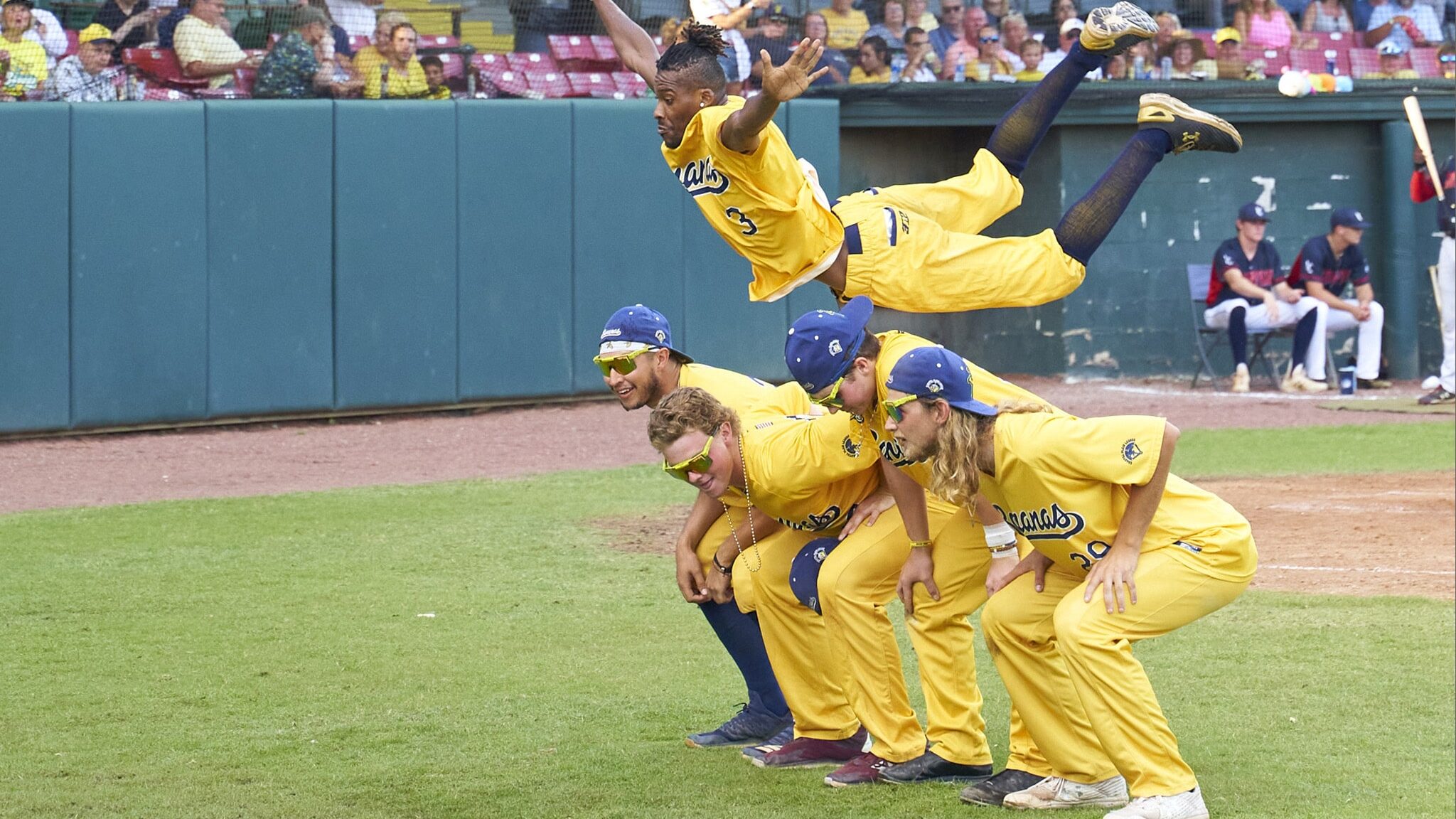 The Savannah Bananas are a popular attraction on TikTok for their very bizarre antics. Raw, messy content is what works best on the app, sports marketers say. (Courtesy of Savannah Bananas)
By Mark J. Burns

In the sports industry, no social media platform has more potential than TikTok, the most downloaded app in the world in the first quarter, according to market intelligence company Sensor Tower.

“In terms of why you’re seeing everybody flock to TikTok, whether that’s a creator, celebrity, sports property, athlete or brand, it’s because it is by far the best way to build massive audience,” said Derek Goode, senior vice president of influencer marketing at 160over90, a global cultural marketing agency.

TikTok, which started as the app Musical.ly before the Chinese tech company ByteDance Ltd. bought it in 2017 and rebranded the platform, made its way to the sports ecosystem in 2019. Since then, digital strategists, social media specialists and marketers have only further emphasized TikTok’s importance when building a brand online. And they’ve found that, in general, the weirder, the better.

In interviews, various marketers touted the platform’s unique user experience, agreeing that TikTok content cannot be easily repurposed on or from other social media platforms. Providing content consistently is key, they said, as the TikTok algorithm rewards users who post frequently.

“My goal is ultimately to peek behind the curtain and bring users to that front row,” said Jenna McNaney, TikTok’s lead for sports partnerships. McNaney said she encourages publishers to capture content that provides a “more holistic bubble of the sports world that you’re not necessarily getting in other places.”

All proved to be the wrong way to consistently leverage TikTok, marketers said. Executives interviewed generally agreed that the less flashy, sparingly produced content traditionally performs better on the platform. Almost all of Inter Miami’s TikTok content is captured through an iPhone with minimal editing.

“This platform optimizes with zero strategy, a good gut for creativity and maybe a little humor,” said Rabil, who described TikTok as a “low bandwidth, high-yield” platform. “TikTok encourages a range of personality, authenticity and creativity.”

Rabil posted a TikTok video in February in which he punched his gym locker code, 9999, into locker number 99 — his longtime uniform number. He paired the action with a trending audio clip (“Nobody’s gonna know”), generating nearly 500,000 views in an hour. It took Rabil 30 seconds to create the video.

“The first two seconds has to be something that is eye-catching, basically like saying ‘WTF?’” said Steve Braband, WWE’s vice president of digital media.

When the creative agency 160over90 advises content creators or brand clients like Dick’s Sporting Goods Inc., Anheuser-Busch InBev SA and Capital One Inc., it recommends an 80-20 rule for TikTok: produce 80% of rawer, less-produced content and 20% of polished, well-edited content.

“That 80 percent of the content is going to perform the highest nine out of 10 times,” Goode said.

Beyond the obscure and unconventional, sports teams and leagues have discovered that behind the scenes, access-driven videos also resonate with fans.

Respondents were asked how often they use social media to stay updated on the following sports-related content:

Survey conducted April 23-25, 2022, among a representative sample of 731 self-identified TikTok users, with a margin of error of plus or minus 4 percentage points.

Inter Miami, which has the second-most TikTok followers in MLS despite having launched its account in January, developed a strategy centered on “making our fans feel like insiders,” said Bianca Rodriguez-Lamas, the club’s director of digital. That includes offering followers unique point-of-view moments, from fans’ marches to the stadium to jersey preparation and post-match celebrations.

“Humanizing the club as much as possible” is key, Rodriguez-Lamas said. Other team and league staffers agreed. Videos that are relatable and spontaneous are two other core characteristics to successful sports TikTok content, they said.

Gordon Weigers, senior manager of digital strategy and editorial content for the NHL’s Vegas Golden Knights, said casual and unscripted Q&A sessions between players have resonated with followers, while the LA Galaxy’s Adam Serrano, director of digital, said that fans on TikTok want to see the personalities behind the players. Footage of players competing in rock, paper, scissors, hugging a child or signing autographs is “a perfect avenue to give people insight into who they are” through TikTok, Serrano added.

Roughly half of TikTok users (49%) said they would be “very” or “somewhat” interested in following sports game highlights on social media, according to the Morning Consult survey. It tied for the highest share of interest in any sports-related content among those surveyed. Meanwhile, 46% of TikTok users said they were at least “somewhat” interested in following player highlights.

Despite what the data suggests, executives collectively said traditional highlights aren’t a cornerstone to TikTok strategies.

Respondents were asked how interested they would be in following different types of sports-related content on social media:

Survey conducted April 23-25, 2022, among a representative sample of 731 self-identified TikTok users, with a margin of error of plus or minus 4 percentage points.

Braband said sharing highlight footage is not a priority for the WWE, unless it’s an “amazing feat of strength, athleticism or a high-flying type moment.” A “remixed highlight” — or a highly stylized and edited moment — however, is a priority, he said.

Ways to “TikTok-ify” a highlight, according to Braband, are to package a video clip with a unique TikTok sound effect, or share a video through a reverse replay or a camera angle that wasn’t seen on the original broadcast. Braband said it’s the “more obscure content that works on the platform.”

“When you combine innately TikTok stuff with the additional access that fans want, it feels like that gets a higher level of engagement than just your run-of-the-mill highlights,” added Goode.

When Savanah Alaniz interviewed with the Savannah Bananas in February 2020, she suggested that the Coastal Plain League baseball team — comprised of some of the country’s top college players — should join TikTok.

Alaniz, now the team’s marketing coordinator, said the platform felt “on brand” for the Georgia-based club, which aims to reach baseball fans through the service as well as hit various niche communities within the platform, such as “Sorority TikTok” and “Country TikTok.”

“TikTok is always our main focus when it comes to content,” Alaniz said.

Before games, the Bananas’ marketing staff, including three videographers, strategize 20 to 30 content pieces they want to capture. Some of the on-field player antics, including dances, backward flips and glove tricks, are even scripted specifically for TikTok, while others happen organically, she said. Some of the more outlandish stunts have included a player lighting a bat on fire and a batter walking up to the plate with a golf caddie.

When deciding to share a TikTok video, the Bananas — whose motto is “Fans first, entertain always” — ask two questions, according to Alaniz: “Does this make baseball more fun?” And “is it shareable with friends?” On April 17, the team posted a video featuring four players performing a viral TikTok dance started by Beyoncé. The clip garnered 2.7 million views and over 300,000 likes.

All eyes on influencer marketing, e-commerce

Marketers and executives said they’re paying close attention to the continued evolution of TikTok Shopping, and how e-commerce can benefit teams, leagues and sports personalities. Some said the creator economy and influencer marketing are areas for potential growth in sports.

“For TikTok specifically across the major social platforms, leveraging influencer marketing is going to be the most important of any other platform,” said the Golden Knights’ Weigers.

Some sports entities have already tapped into TikTok culture to engage in content collaborations and crossover brand promotion.

For the NFL, partnering with TikTokers to reach younger, casual and female fans, in addition to more diverse audiences, will remain part of the influencer marketing strategy, said Ian Trombetta, the league’s senior vice president of social and influencer marketing. In 2021, the NFL worked with “The Rainbow Dads” — a couple who are diehard Buffalo Bills fans and have about 830,000 TikTok followers — to post content celebrating gay pride.

“We’re just scratching the surface with what’s possible on the platform,” Trombetta said.