Record-Setting Quit Rates Are About More Than Just Pay

Amid a historically tight labor market, a record 4.5 million Americans quit their jobs in March. Many were driven by a desire to earn a higher income, but Morning Consult data suggests that burnout is also contributing to greater attrition rates in certain industries 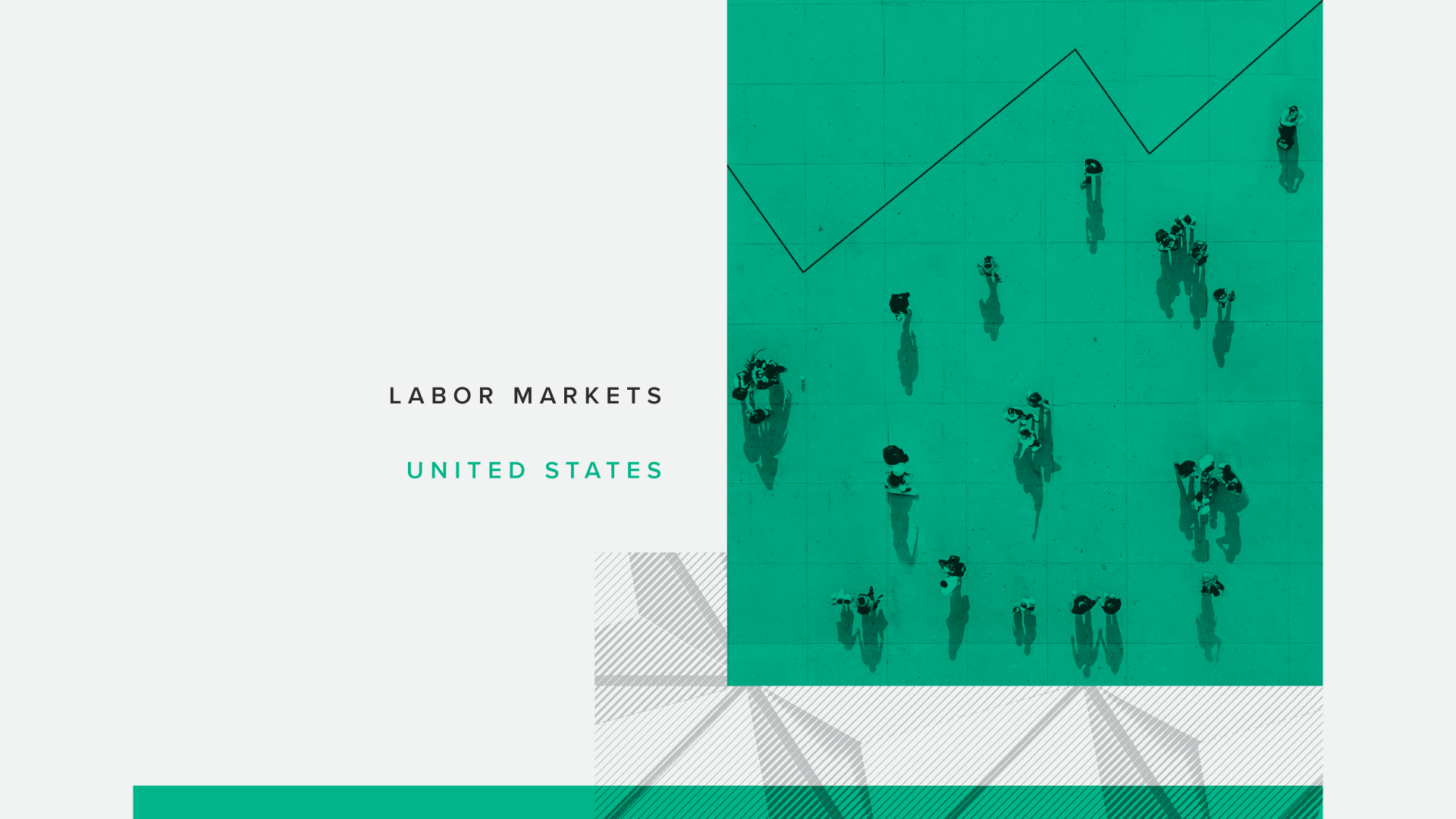 Much has been made of the “Great Resignation,” which began when workers reprioritized their lives and relationships with work during the pandemic. Workers are increasingly looking to switch jobs amid a historically tight labor market: In March, a record 4.5 million Americans quit their jobs.

This labor market churn has placed enormous stress on companies to find, attract and retain workers. Replacing workers is an arduous and costly process that can present headwinds to job growth in an already tight labor market. Research suggests that there is a point at which elevated turnover stops enhancing labor productivity, as even the most qualified recent hires need time to be brought up to speed, and companies are forced to do more on-the-job training as a result.

A desire to earn more money is the primary driver for most voluntary separations. Morning Consult data from February to April shows that pay was the most frequently cited reason for quitting or switching jobs: 63% of U.S. adults who left a job voluntarily in the past year said low pay at their previous job was a major or minor reason for the employment change. 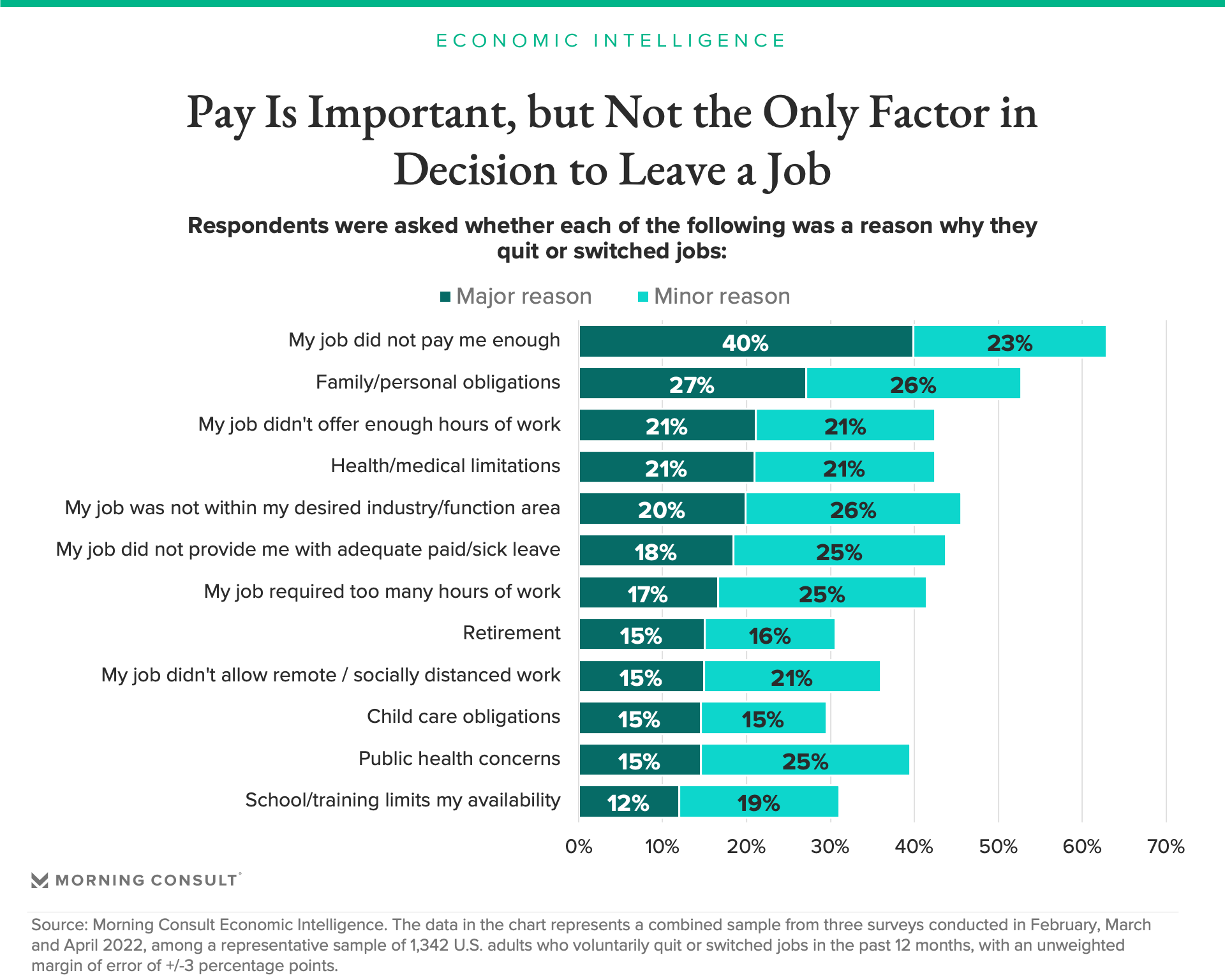 Data from the Federal Reserve Bank of Atlanta confirms that job switchers are being rewarded. As of March, the three-month moving average of median wage growth was 7.1% for workers who had switched jobs, compared with 5.3% for workers who stayed with the same employer.

Overall, in the three months from February to April, Morning Consult data indicates that 12.3% of U.S. adults voluntarily quit or resigned from a job in the past 12 months. But this rate was even higher in certain industries: 16.1% of workers in information and technology and 16.7% of workers in food & beverage and leisure & hospitality voluntarily left a job in the past 12 months. 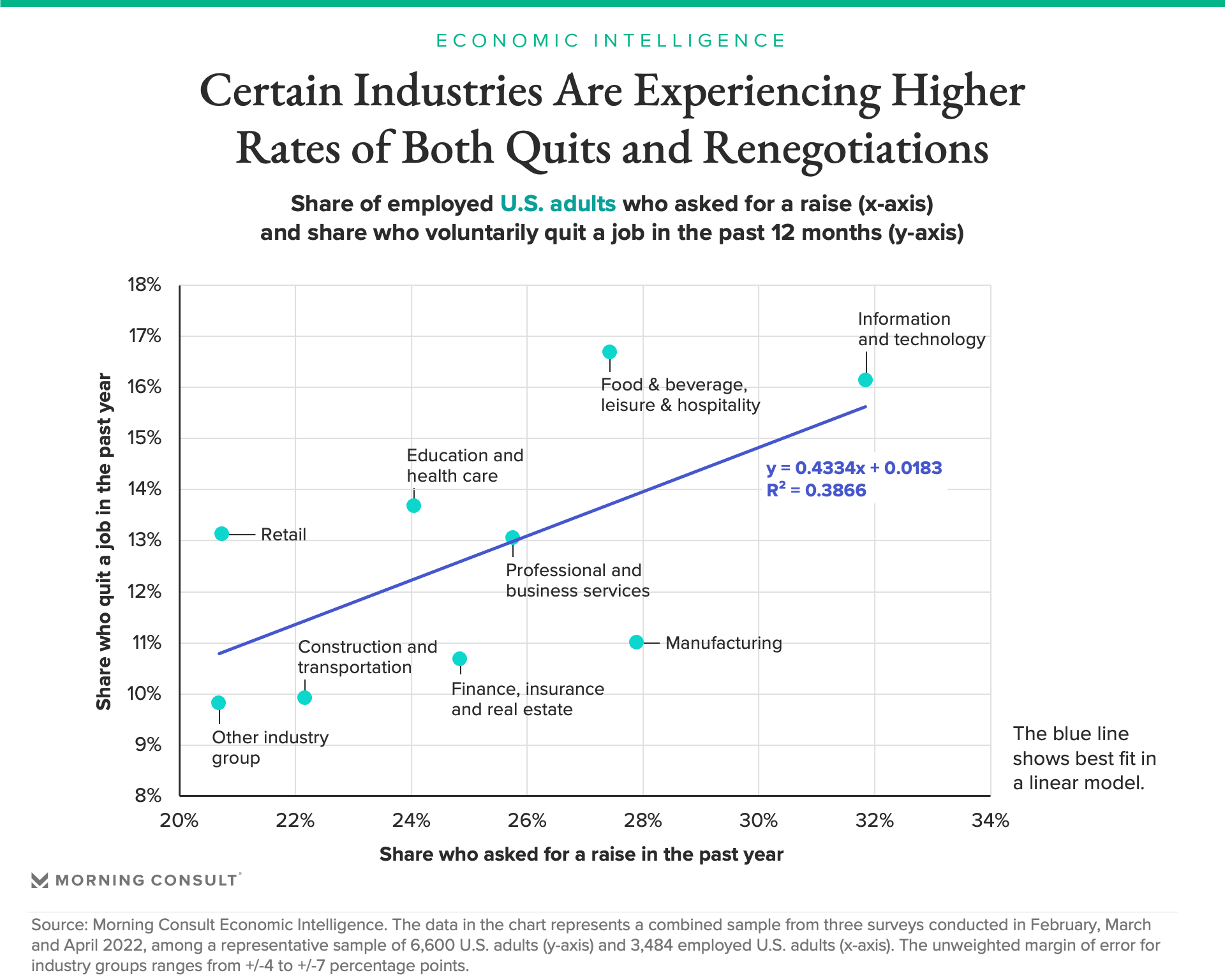 Burnout is driving workers to quit, too

While pay is a key motivator, it’s far from the only reason workers are quitting at higher rates. Burnout is also contributing to resignations in certain industries.

In the three months from February to April, the share of workers who said their employer has too few workers to do the work that needs to be done was 46.8% in the food & beverage and leisure & hospitality industries and 39.8% in retail. 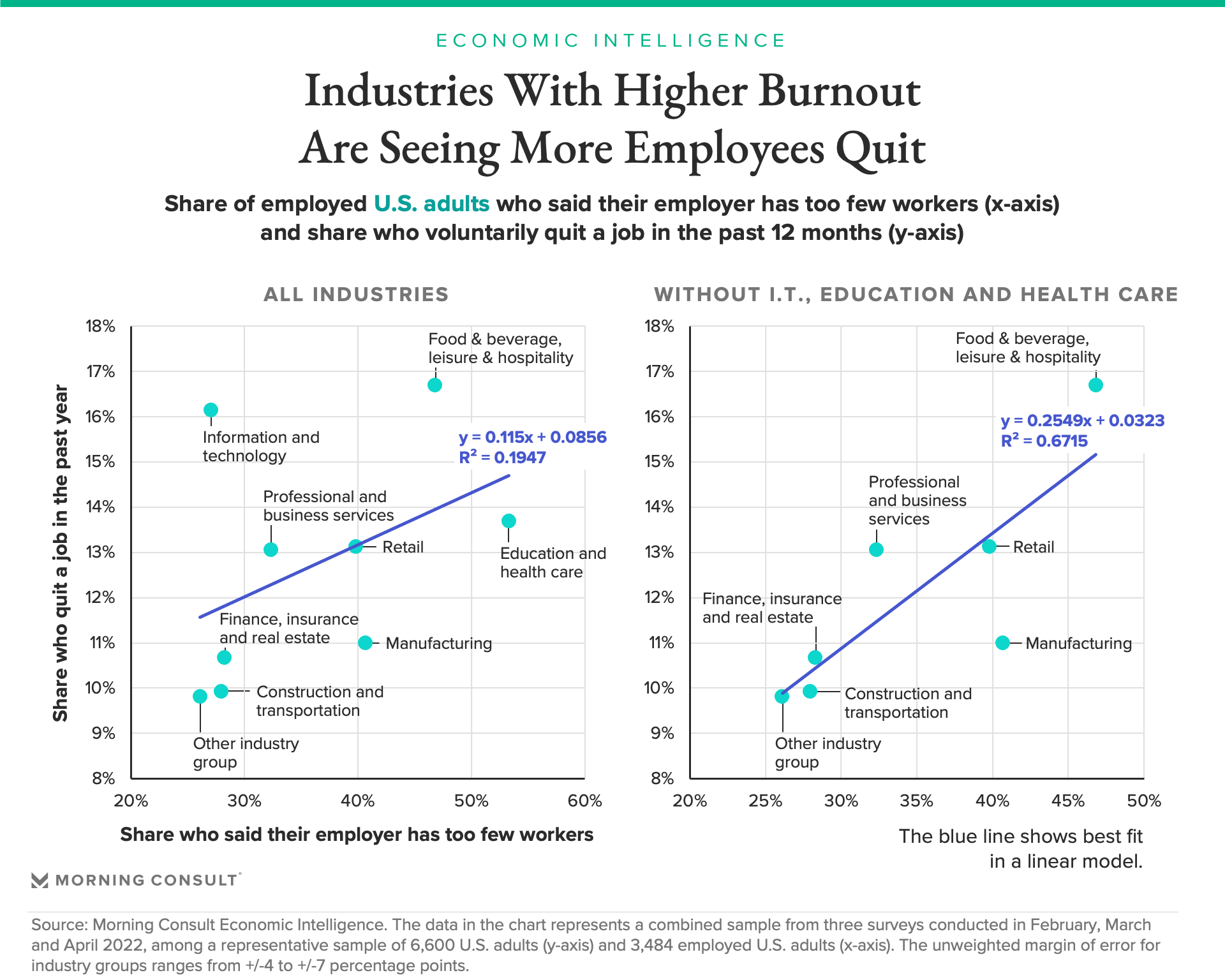 For employers trying to attract and retain workers, compensation matters. But workers are also looking for flexibility, and many are just burned out. As such, increasing pay alone may not be enough, and employers may need to work more closely with employees to find a balanced solution that works for both parties.

Morning Consult’s U.S. labor market survey offers insights into the drivers of topline employment figures by looking under the hood at the principal motivations and intentions of workers, the unemployed and those outside of the labor force. It asks questions around past, current and expected employment; unemployment insurance benefits; motivations for seeking or not seeking employment; views toward remote work and returning to the office; and willingness to change industries or geographies.

The survey is fielded on a monthly basis among a representative sample of 2,200 adults in the United States. Data is collected in the first half of each month, typically between the 10th and 15th. Select topline figures are publicly reported via the Morning Consult / Axios Inequality Index.