The Ukraine War Brought Europe Together. Can It Cement the Bond?

Mutual trust and views of the European Union and NATO have improved across Europe, offering a chance for its leaders to fortify their bonds and better prepare for future crises 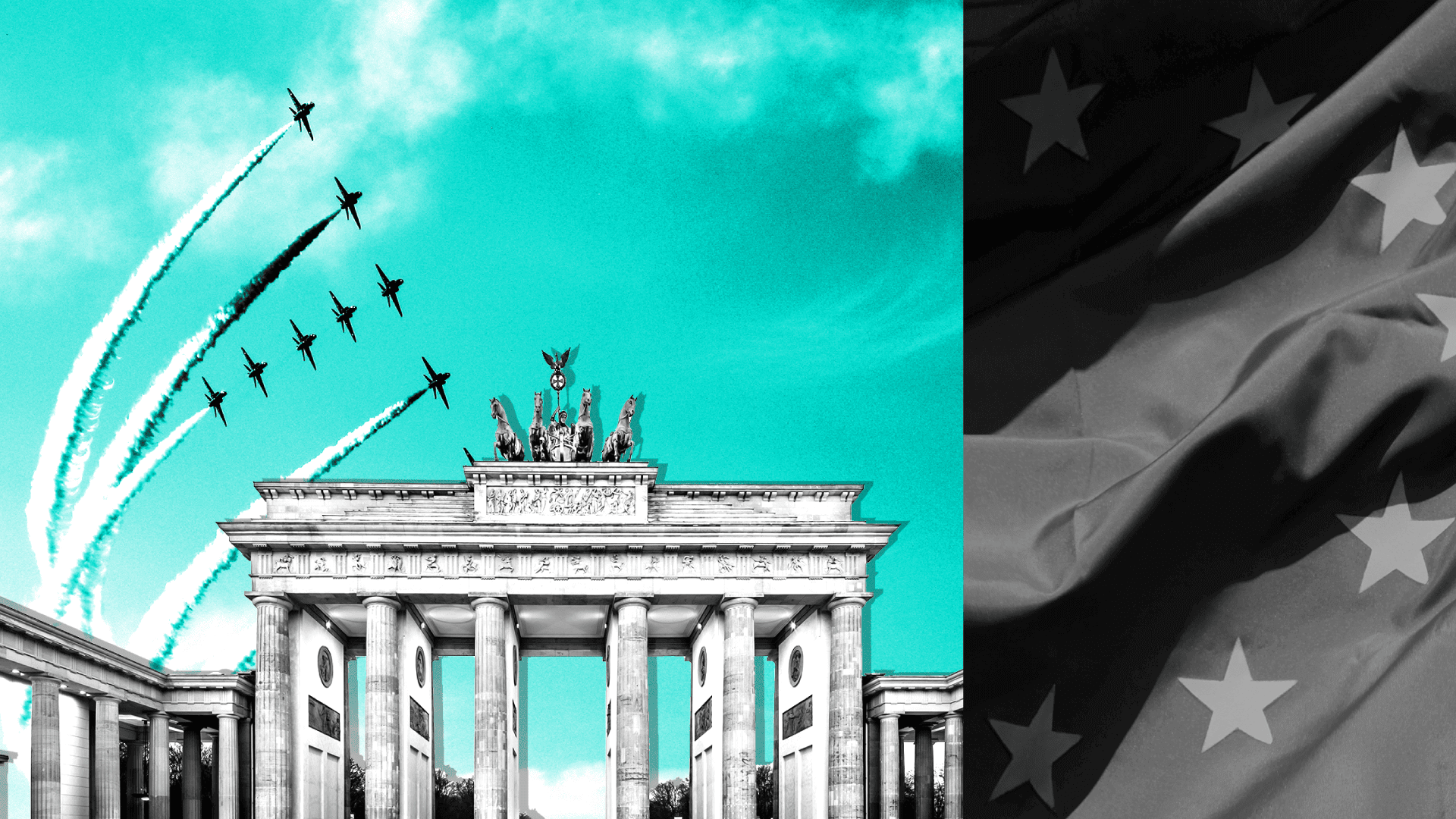 Support for the European Union among Europeans has risen since Russia's invasion of Ukraine. (Getty Images / Morning Consult artwork by Monique Zarbaf)
By Matthew Kendrick

Europeans have rallied behind the European Union and NATO in the face of Russia’s aggression in Ukraine, Morning Consult surveys show, wedging open a rare window for leaders to galvanize the two institutions and better prepare the continent against future crises.

But the bloc’s leaders must prove that their triumphant talk of European values amid the ongoing defiance of Moscow is more than temporary political positioning, experts say, or the moment may pass with Europe’s central institutions no stronger than before the war.

Nicolè Ford, an adjunct professor of comparative politics at the University of Tampa’s Department of Political Science and International Studies, says Brussels had a lot of ground to make up in the minds of Europeans after its meek responses to Russia in 2014.

“Europe has invited Russian aggression by repeatedly doing nothing in response to it,” Ford said, pointing to the invasions of Crimea and the Donbas, “and part of what Brussels needed to do to strengthen people’s faith in the European Union was to stand on its values again.”

Instead of statements, Europe has this time met Russian aggression toward longtime E.U. aspirant Ukraine with severe sanctions and heavy weapons, while also welcoming millions of its refugees.

Ian Brzezinski, a senior fellow at the Atlantic Council and former deputy assistant Defense secretary for Europe and NATO policy, said the coordination of Europe’s multilateral institutions has silenced many skeptics.

“We are witnessing the most intense collaboration between NATO and the EU since the creation of these two institutions in a coordinated effort in their respective realms of expertise,” he said, noting the war reinvigorated NATO with purpose. “And the E.U. is operating in its strike zone, leveraging the economic power to shut down — to a degree — the Russian economy; this is the kind of synergy we want when it comes to protecting our territories, our peoples and our values.”

Those successes have led to a boon for the public image of both institutions: Across 10 of 12 European nations surveyed by Morning Consult, the European Union’s and NATO’s popularity rose immediately following Russia’s Feb. 24 invasion of Ukraine before leveling out in April. 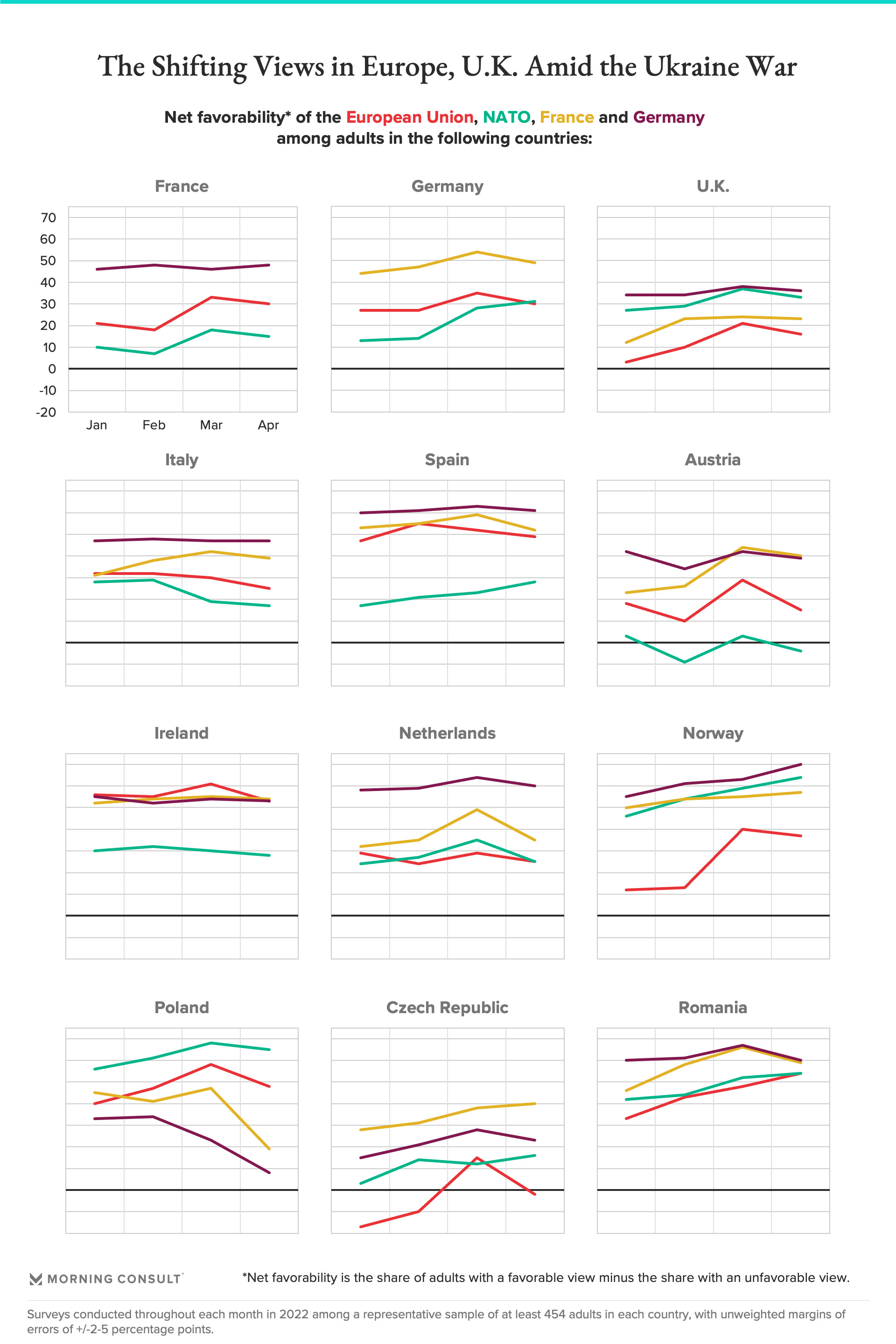 The populaces of France, Austria, the Czech Republic and Poland all saw double-digit gains in net favorability — the share of adults with a favorable view minus the share with an unfavorable view — toward the European Union between February and March,  but Norwegians exhibited the largest upswing with a rise of 27 percentage points. In the United Kingdom, 49% of adults expressed a favorable view of the E.U. in March despite having voted to leave it six years ago.

However, south of the Alps and Pyrenees, people weren’t so pleased. In Spain and Italy, net favorability toward the E.U. was virtually unchanged, and NATO also saw a 10-point slide among Italians.

“Italy has had a bit of a love affair with Russia and has been a voice in the E.U. calling for closer relations with Moscow,” said Sonnet Frisbie, Morning Consult’s managing director of geopolitical risk analysis for Europe, the Middle East and Africa, noting that when Ukrainian President Volodymyr Zelenskyy addressed Italy’s Parliament, some lawmakers boycotted the speech. 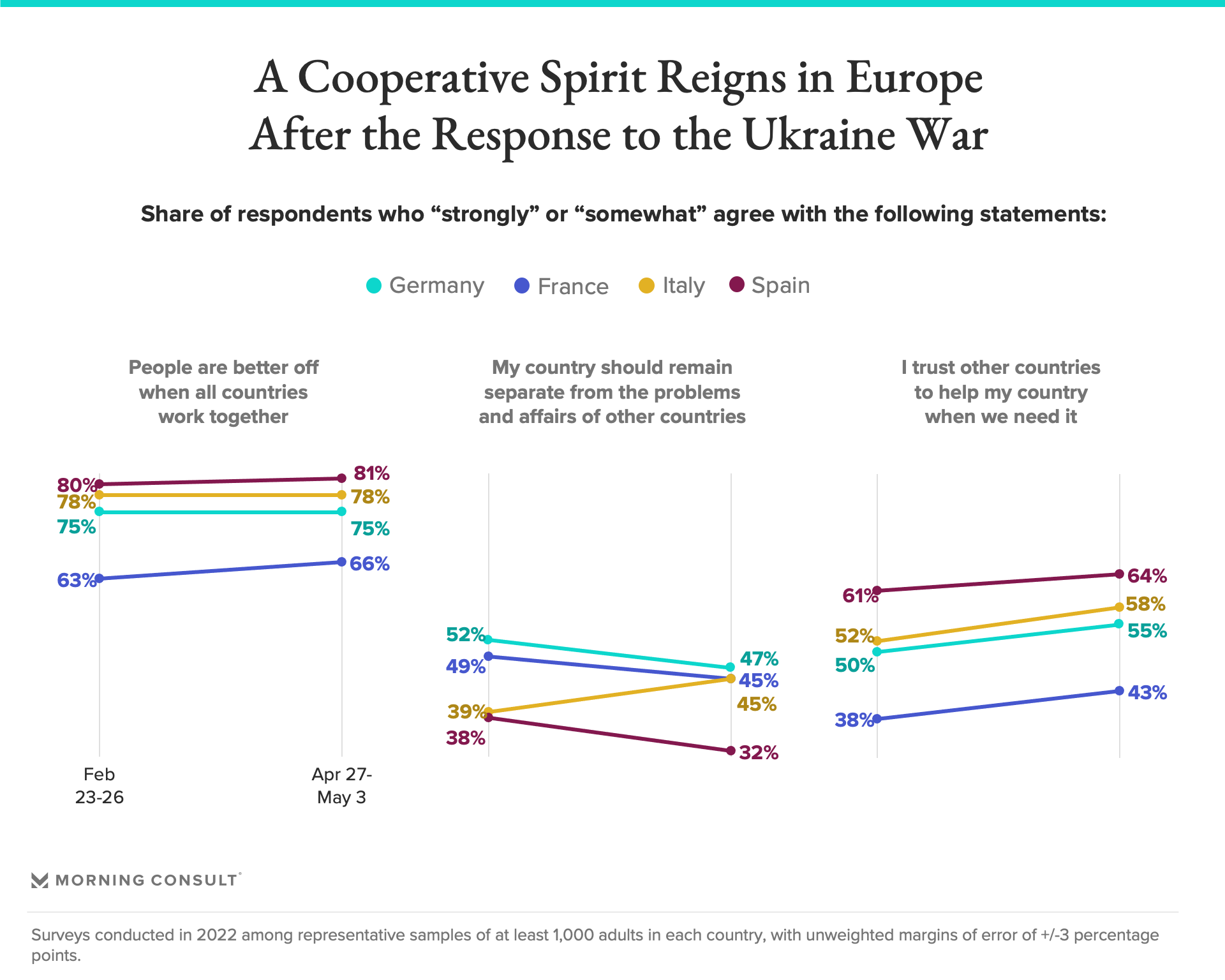 Perhaps belying their reliance on Russian gas, Italians also bucked a growing interventionist trend in Europe. The share of Italians who say Italy should stay out of the affairs of other countries rose from 39% to 45% while France, Germany and Spain all saw declines on the question.

But even in Italy, there is some hope for the European project: 78% of Italians still express faith in international cooperation — and after the invasion of Ukraine Italians saw the largest rise in trust that other countries would help their country.

If there is one leader in Europe with the political capital to sway an electorate, it’s Italian Prime Minister Mario Draghi, the most popular leader in the G-7, according to Morning Consult’s Global Leader Approval Ratings tracker. Whatever his constituents feel, Draghi has given Brussels full backing on sanctions, endorsed Ukraine’s application to join the union, dispatched officials to find alternate sources of natural gas and called for the bloc to further integrate.

Stanley R. Sloan, a visiting scholar of political science at Middlebury College and former deputy national intelligence officer for Europe at the CIA, said trends such as the growing trust between European nations amid their assistance to Ukraine offers useful kindling for further integration.

“The fact is that for European defense to become more integrated on the continental level, there has to be more trust among countries. Countries will have to rely on their neighbors for things that they might have provided themselves in the past,” Sloan said.

Indeed, folks in the European Union’s strongest states are not only feeling more trusting after the Ukraine war. They want to beef up their defense forces as well. 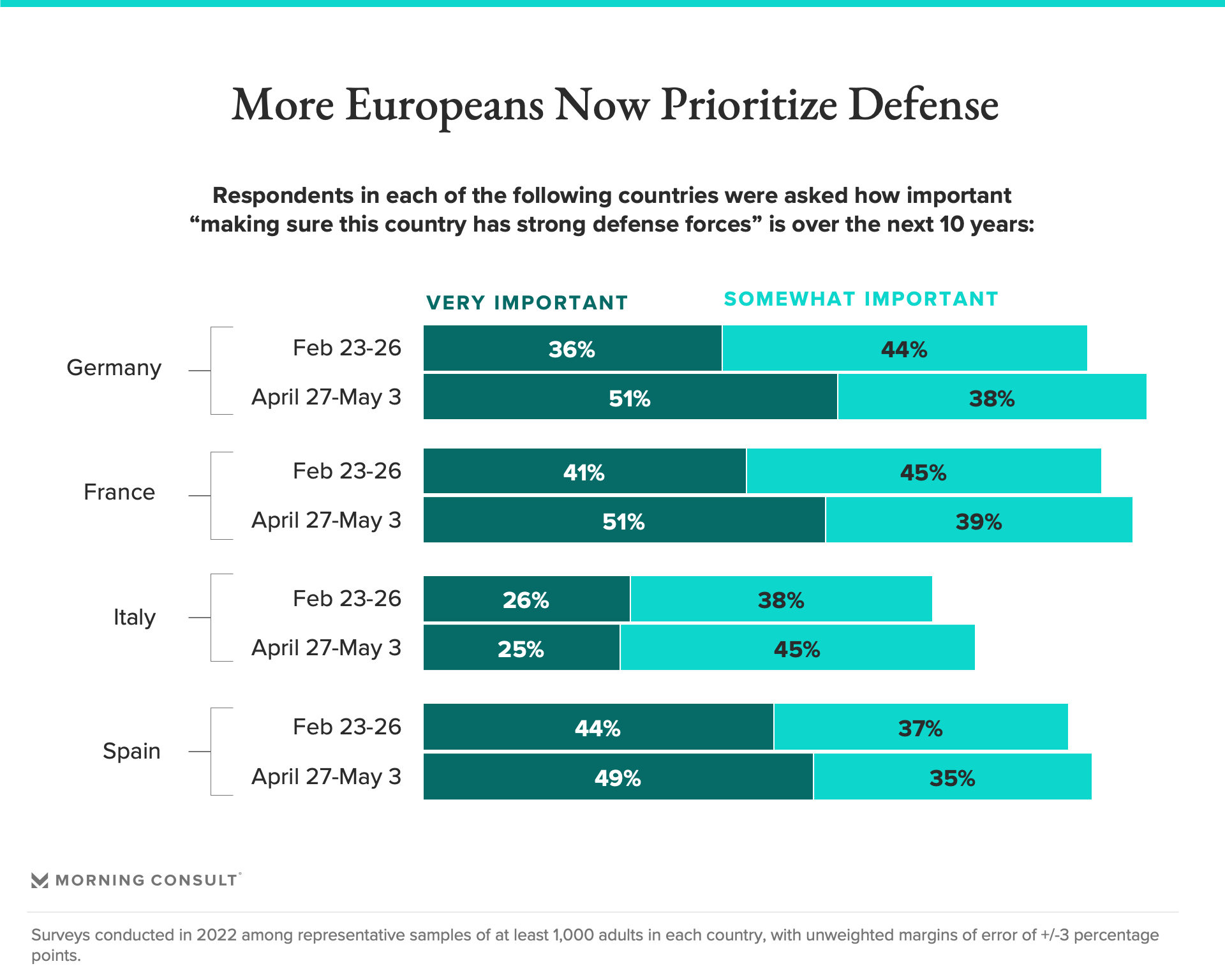 Majorities in France and Germany now say having “strong defense forces” is a “very important” priority over the next decade, up 15 and 10 points, respectively, since February. In Spain, the share who said the same rose 5 points, while in Italy, the share who said it was at least “somewhat” important rose 6 points.

The increasingly muscular posture might sound like it augurs good tidings for French President Emmanuel Macron’s notions of “strategic autonomy” in Europe — often seen as code for a European army — but Sloan says that’s not in the cards for now.

“Even if Europe spends a lot more money and produces more forces, this is like turning an aircraft carrier, it takes a long time to change directions,” he said. “The dependence on the United States as the backbone of defense will persist for decades.”

For now, Draghi’s calls to better coordinate Europe’s defense systems might have to suffice. In any case, Washington would surely be pleased to see its European allies meeting NATO’s goal to spend 2% of GDP on defense, as it has long called for.

Yet for all the promising indicators for Europe, much remains to be done. The most serious warning signs of obstacles for European geopolitical coordination come from the so-called “front-line states,” former signatories to the Warsaw Pact in Eastern Europe.

Net favorability of the European Union, for instance, slipped back into the red in the Czech Republic in April, and Czechs also hold among the dimmest views of NATO. In Poland, esteem of both institutions declined in April as well, and the drop in positivity toward Germany and France, the bloc’s leading states, was more pronounced. The news was better in Romania, but views of France and Germany also went into decline after rising quickly in the opening months of the war.

“When you’re on the front line like that, you make sharper distinctions between those allies who are really backing you up and those who are more hesitant,” said Brzezinski. “Poland is the center of efforts to support Ukraine. That’s where most of the humanitarian and military assistance is funneling through, and some Russian missiles have landed close to its borders.”

Related: At the Crossroads of the World, Turkey Charts Its Own Course on Ukraine

France’s perceived focus on attaining a diplomatic solution and Germany’s hesitance to provide heavy weaponry may be partly why Poles and others in Eastern Europe are placing their trust more in NATO, which Ford of the University of Tampa says has historical roots.

“When the Soviet Union fell apart, Poland ran to NATO and basically said, ‘If you don’t take us, we will arm ourselves,’” she said. “NATO wasn’t pursuing the Warsaw states, the Warsaw states pursued NATO because they knew what we’re seeing right now was going to happen.”

In another Morning Consult survey conducted May 5-10, 69% of Poles approved of the European Union’s handling of policy in Ukraine and Eastern Europe, and 75% said the same about NATO — even if only 37% approved of Macron’s handling and only 26% of German Chancellor Olaf Scholz’s handling. (In fact, the only leader whose actions received less approval among Poles was Russian President Vladimir Putin.)

Still, Eastern Europeans would not take it lightly if the powers in Western Europe get cold feet should the going get tougher in Ukraine, said Sloan of Middlebury College, with a return to the post-2014 despondency about European institutions not off the cards.