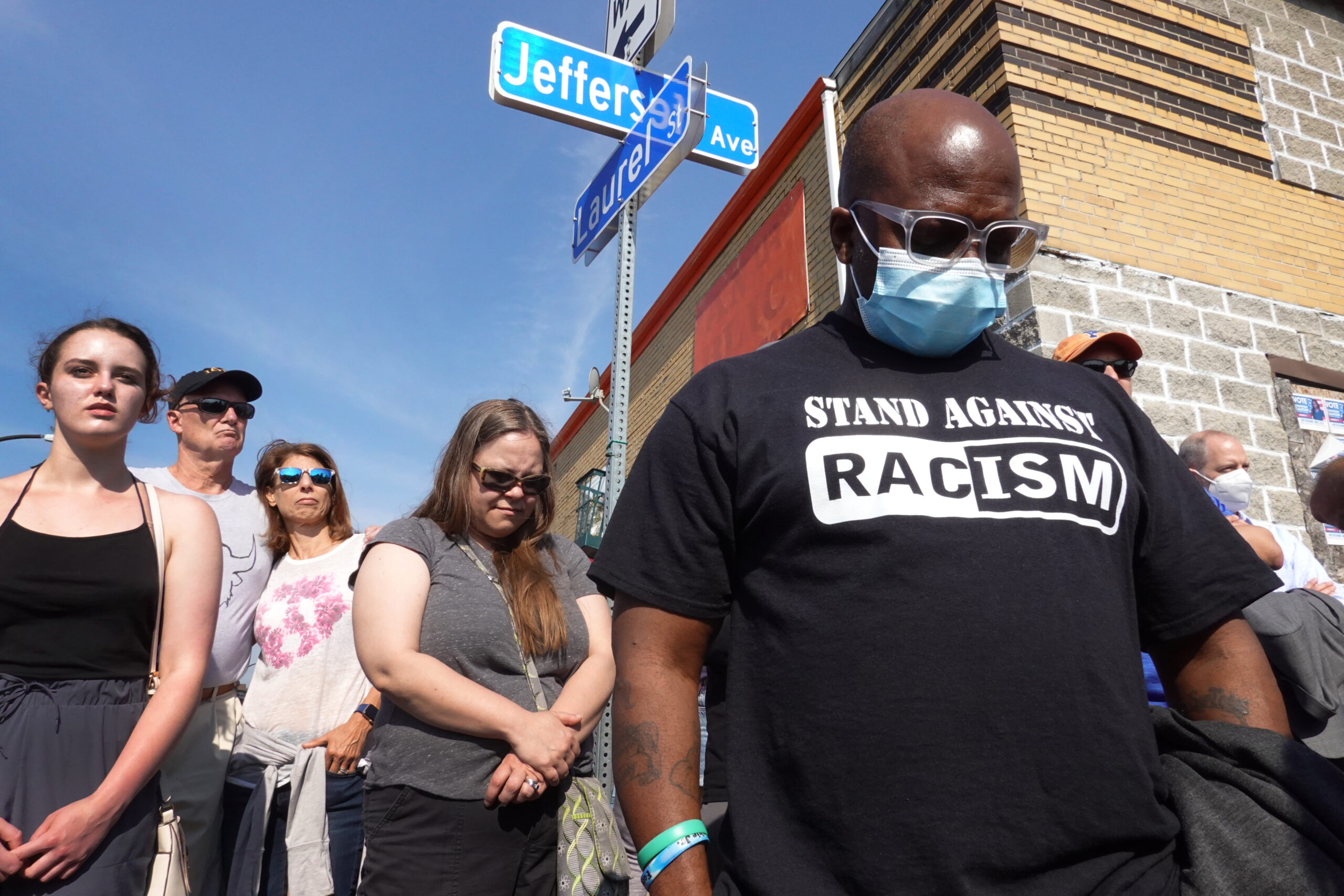 People gather outside of Tops market on Sunday, one day after authorities say an 18-year-old inspired by racist ideology shot and killed 10 people and injured three others in a predominantly Black neighborhood in Buffalo, N.Y. (Scott Olson/Getty Images)
By Eli Yokley

What’s more, the level of anxiety over white nationalism and the threat it poses to the country — though ample — also has not returned to the heights hit in late 2019 after a similar shooting in El Paso, Texas.

Voters were asked which of the following they were more concerned about:

Where voters stand on white supremacy

Authorities identified Payton Gendron, an 18-year-old white man, as the shooter who killed 10 people — mostly Black — at the Tops grocery store. He’s believed to have been acting on a white supremacist ideology known as the “great replacement” conspiracy theory, which claims that Western elites are seeking to weaken whites’ power by replacing them with people of color.

Once on the fringe of American political discourse, the theory has been embraced by Republican influencers such as Fox News host Tucker Carlson, Republican Senate candidate J.D. Vance of Ohio and House Republican Conference Chair Elise Stefanik (R-N.Y.), and that messaging has filtered downward to the party’s voters, despite just 22 percent saying in the survey that they’d heard of the term.

According to the Monday survey, 3 in 5 Republican voters say they are more worried that politicians and government officials are using U.S. immigration policy to try to lessen the influence white Americans have on the country’s economics, politics and culture than they are about mass violence committed in the United States by white supremacists.

Most Democrats (78%) and a plurality of independents (47%) identified racist mass violence as more concerning.

The white supremacist ideology has been blamed for a wave of violence in recent years, including the 2019 mass shooting in El Paso, Texas. The latest brutality has prompted a recent uptick in concerns about white nationalism.

After Buffalo, 2 in 5 Voters See White Nationalism as a Critical Threat to the U.S.

Surveys conducted among a representative sample of roughly 2,000 registered voters each, with unweighted margins of error of +/- 2 percentage points. Figures may not add up to 100% due to rounding.

Forty percent of voters — including 2 in 3 Democrats, over a third of independents and 16% of Republicans — say white nationalism represents “a critical threat” to the vital interests of the United States in the next 10 years. The figures are similar to a Morning Consult survey conducted after the January 2021 attack on the Capitol that included supporters of then-President Donald Trump aligned with the racist ideology, but are still several percentage points below the 47% who reported that threat level after the El Paso shooting

How voters Washington want to respond to Buffalo

Despite the division gun-control measures cause on Capitol Hill, they are popular with voters — especially in the aftermath of high-profile mass shootings like over the weekend in Buffalo.

Surveys conducted among a representative sample of roughly 2,000 registered voters each, with unweighted margins of error of +/- 2 percentage points. Figures may not add up to 100% due to rounding.

As was the case earlier in Biden’s presidency — and during the tenure of the last Democratic president, Barack Obama — support for stricter gun control laws is weaker now than after mass shootings when Trump was in office, driven largely by weaker backing among Republican voters.

Given the narrowly divided House and the evenly split Senate, Democratic leaders have conceded that federal action on gun control is unlikely despite two-thirds support among the electorate for bans on assault-style weapons and high-capacity ammunition magazines, both of which authorities say Gendron used in Buffalo.

In the face of that inaction on Capitol Hill, many Democrats have taken to lambasting the normalization of racist ideologies that are believed to have fueled the shooter, the combatting of which many voters say should be prioritized to prevent future violence.

Voters were asked how much of a priority each of the following should be to prevent mass shootings in the United States:

Three in 4 voters said combating the spread of racist ideologies and beliefs should be a priority for curbing future massacres, more than the 67% who said the same of enacting stricter gun control laws. The majority of voters of all political stripes said stricter enforcement of existing gun control laws should be prioritized, while there was near unanimity on the importance of better mental health screening and support.

That’s likely driven by the fact that 4 in 5 voters believe mental illness is to blame for mass shootings, far more than the 42% who point their finger to the National Rifle Association, which fights gun control measures, or the 37% who blamed Fox News, which hosts Carlson’s program and a range of conservative characters who have promoted the ideology believed to be behind the Buffalo shooter.