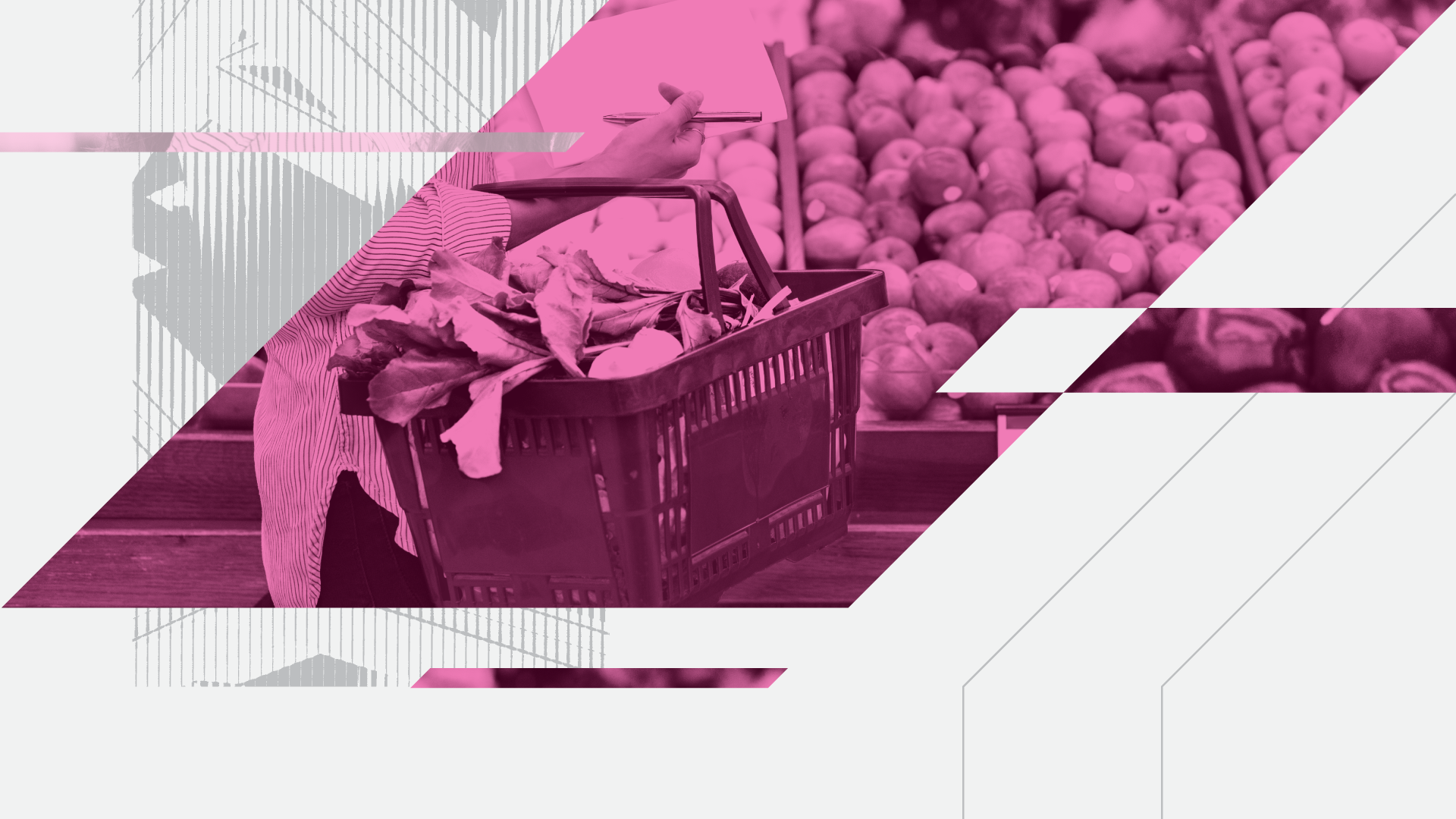 Consumers are making ends meet at the grocery store by comparing prices, buying generic products and clipping coupons. That means consumers’ purchase decisions are up for grabs, creating an opportunity to connect with new users, but some brands and products will be on the losing end of this equation. Food and beverage brands need to go beyond discounts and extol their value proposition to connect with consumers.

As the price of groceries continues to rise, consumers are paying more attention to — and, in many cases, actively managing — their grocery budgets, buying generic or store brands in lieu of their favorite brands, shopping sales, and clipping coupons to save money.

The Bureau of Labor Statistics’ food at home consumer price index rose 10% between March 2021 and March 2022. The magnitude of that change, paired with the media attention on inflation in grocery prices and across the economy, is contributing to high levels of cost concern among consumers — and lots of cost-saving measures. 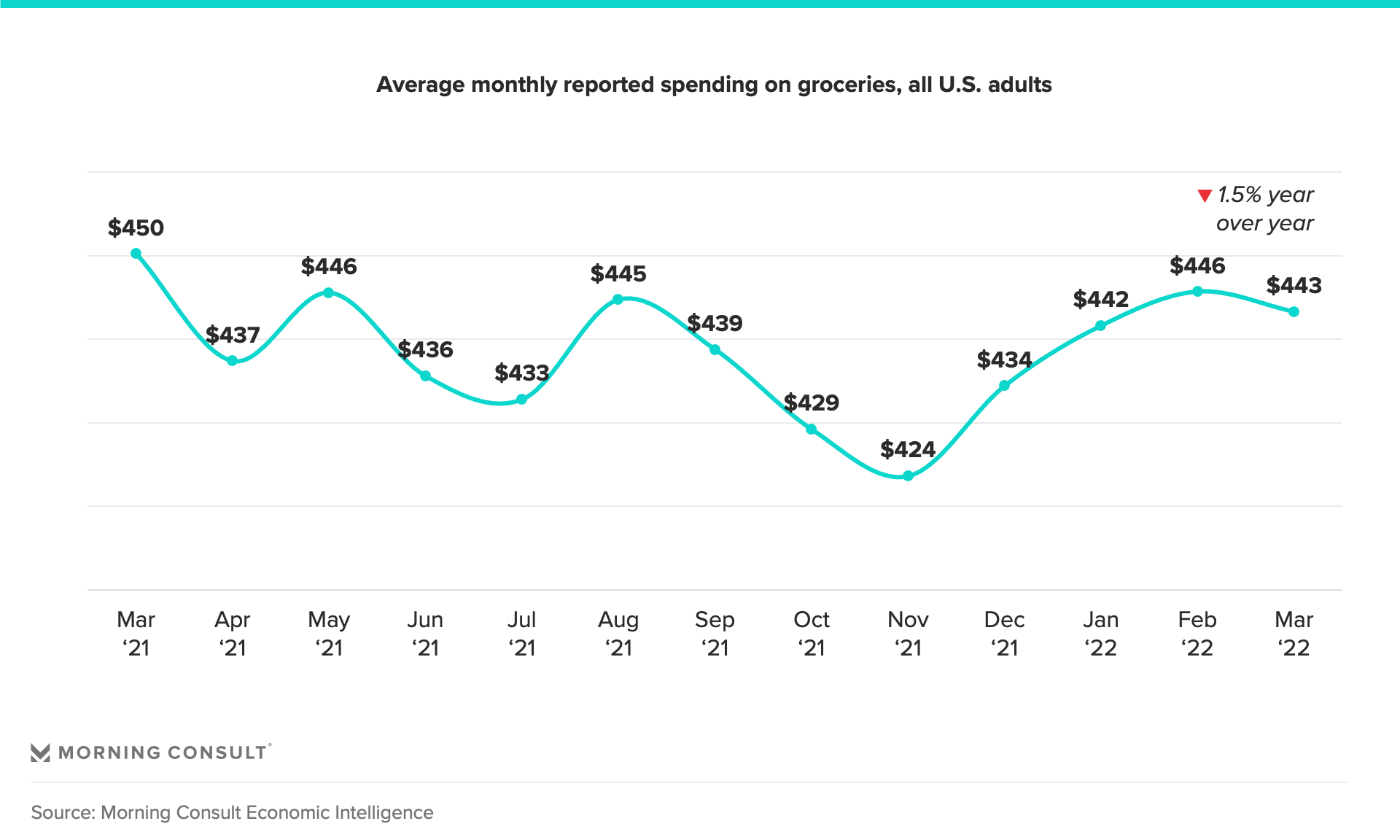 Despite higher prices, consumers’ reported grocery spending was 1.5% lower in March than it was the same month a year ago. Demand for groceries is relatively inelastic, but higher prices are driving more consumers to opt for less costly alternatives, such as generic or store brands instead of name brands. Seven in 10 consumers said they intentionally took steps to save money as a result of rising inflation in April.

This represents an opportunity for store brands to earn loyalty with these economical consumers — and should serve as a warning for brand names with higher price points. 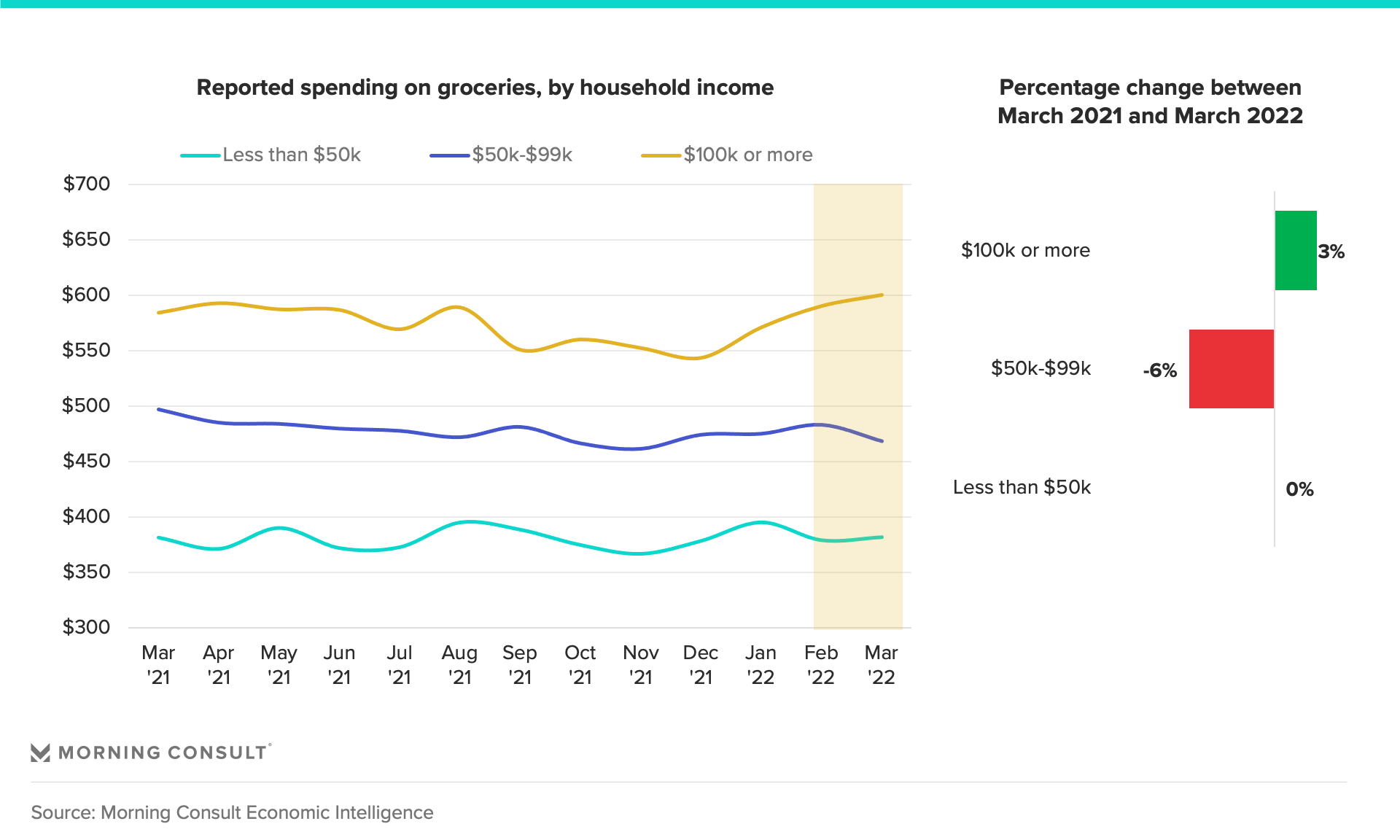 Grocery spending increased 3% compared with last March among the highest income bracket — a nominal increase relative to inflation — while flattening or dropping among lower-income respondents. When presented with higher prices on grocery shelves, higher-income households may be less likely to trade down to lower-cost food and beverage items and instead increase their spending, but clearly that approach has its limits. 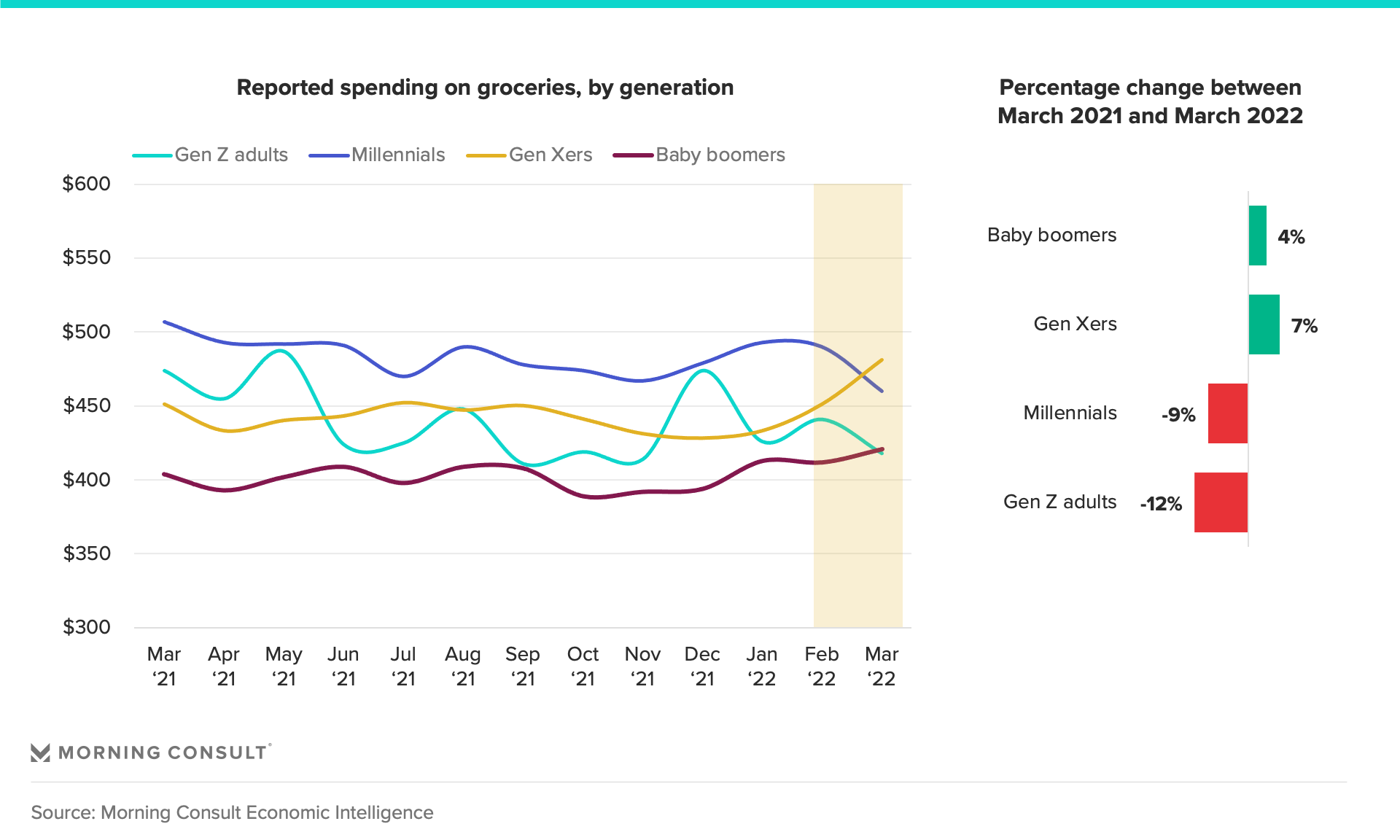 Millennials — who tend to spend more than other generations on groceries — registered a 9% year-over-year decrease in grocery spending in March. This group cut spending across a range of categories in March in response to economic uncertainty and inflation.

Rising concern over the cost of grocery items is highest in the categories consumers purchase and consume frequently: meat, produce and dairy. That doesn’t necessarily translate directly to decreased purchase intent, but it may mean more time spent on purchase decisions and more consideration of the value equation in these categories. 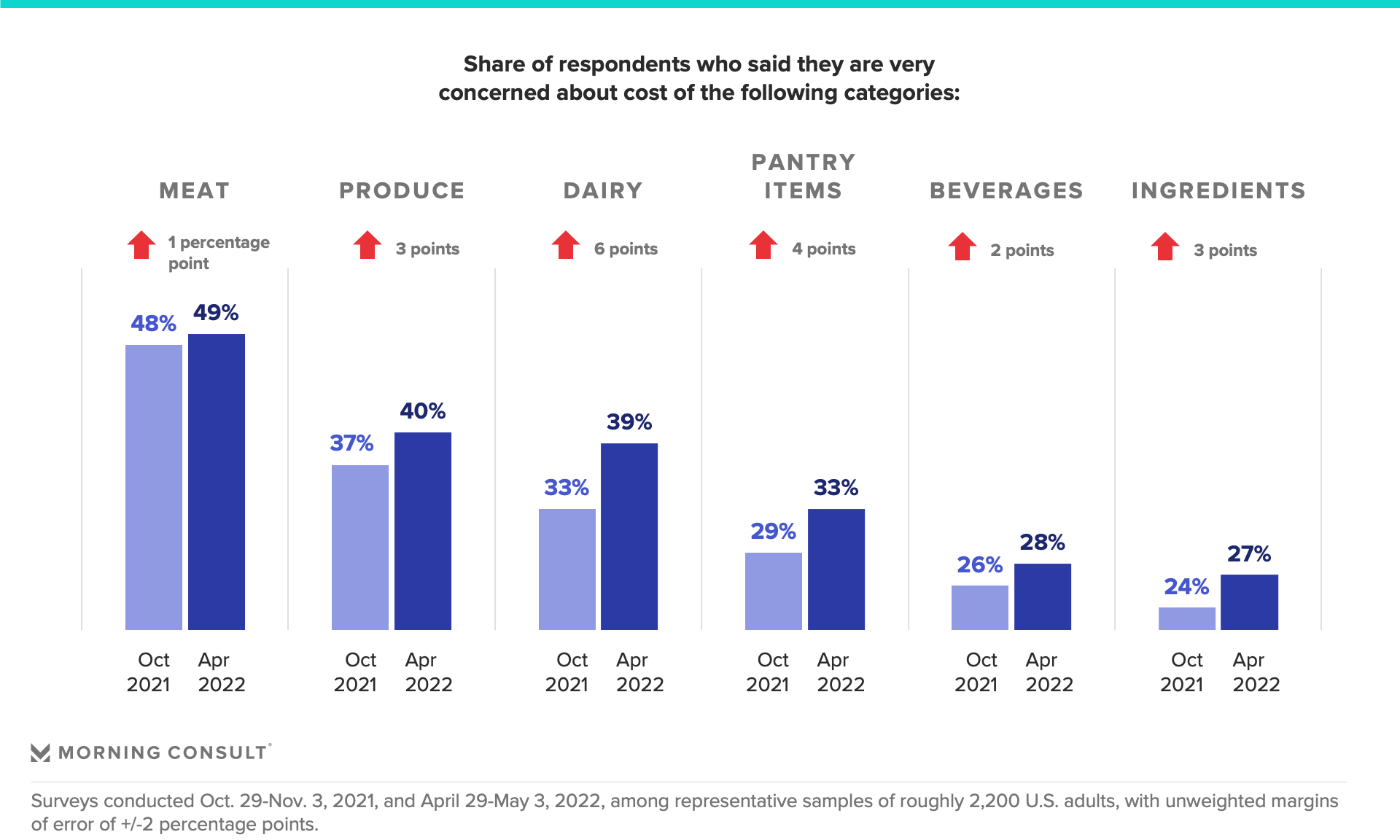 Consumers are increasingly buying generic foods and beverages to save money

Across most demographics, more consumers reported buying generic products to save on grocery bills — 43% in April, up from 36% in October 2021, when Morning Consult began tracking. Food and beverage brands should be closely monitoring their categories and preparing marketing efforts to defend brand share or win back customers’ loyalty from store brands. 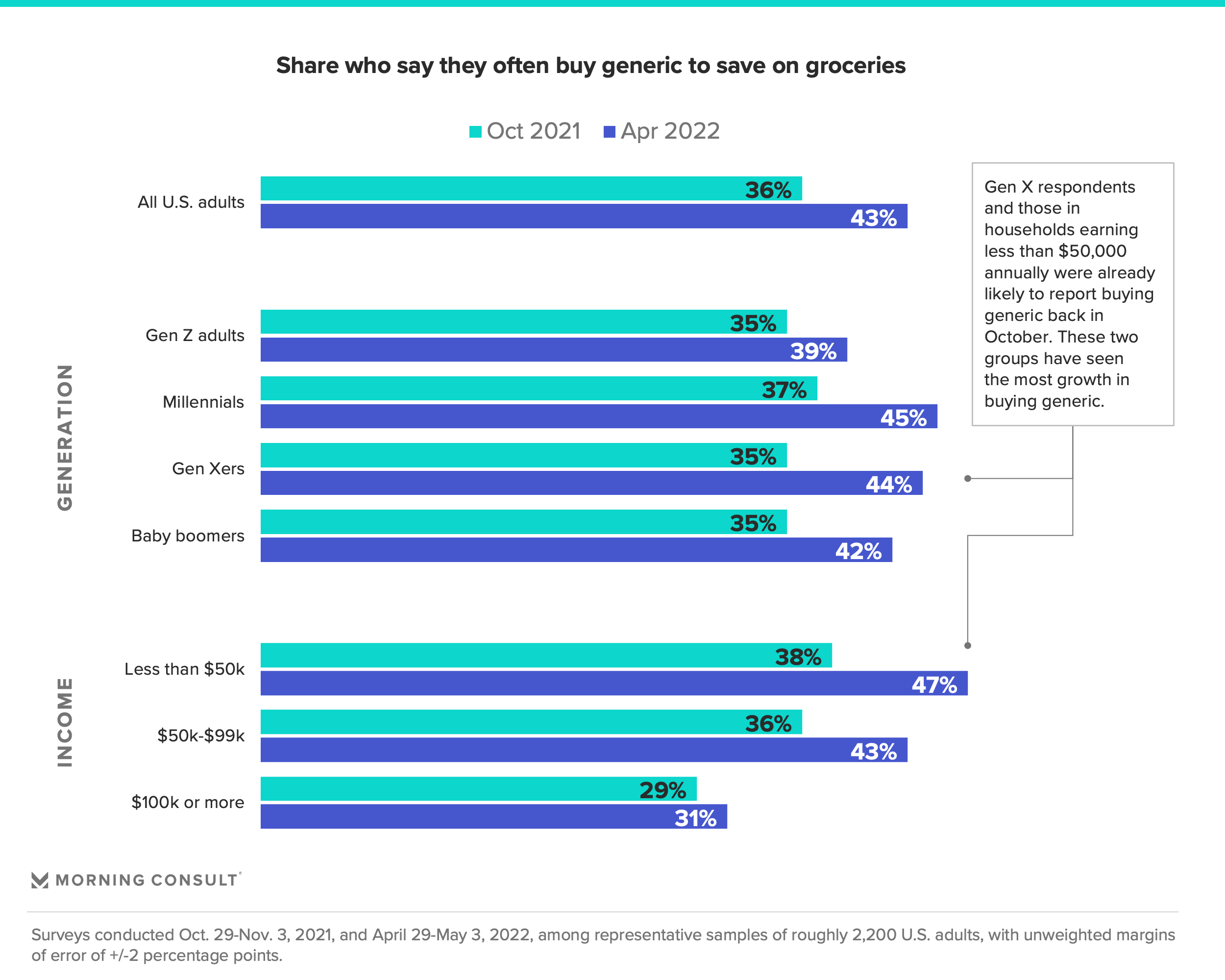 Consumers are engaging in other cost-saving tactics as well. The most common is comparing prices: Just over half (51%) of consumers said they often do this to save on their grocery bills (up 5 percentage points from October). Around 3 in 10 said they often use coupons, while 25% often shop at multiple stores, and 19% said they often buy fewer items overall. The share who said a sale encouraged them to purchase items they didn’t originally intend to buy increased from 49% to 55% between October and March.

Another factor is that consumers can’t buy what they can’t find. Ongoing supply chain disruptions are likely contributing to lower purchasing as well: 61% of U.S. who shopped for groceries in April said they had difficulty finding certain items. Adults who considered but did not complete grocery purchases in April were more likely to cite unavailability of certain products as the main reason than they were for other categories.

Grocery spending is relatively insulated from drastic cuts, but that doesn’t mean consumers won’t change their purchasing patterns within the supermarket. Economic headwinds, including elevated prices and declining consumer confidence, will continue to force tough budget choices upon consumers, as these indicators don’t appear to be turning around any time soon.

This can create opportunities for brands — especially store brands — to connect with consumers, but it means brand-name products commanding a premium price cannot rest on their laurels. Now is the time to actively communicate benefits, such as quality, price per use or worthwhile indulgence.