A confluence of factors continues to challenge distribution networks in the United States, putting upward pressure on consumer prices — but certain regions are feeling the pinch more than others 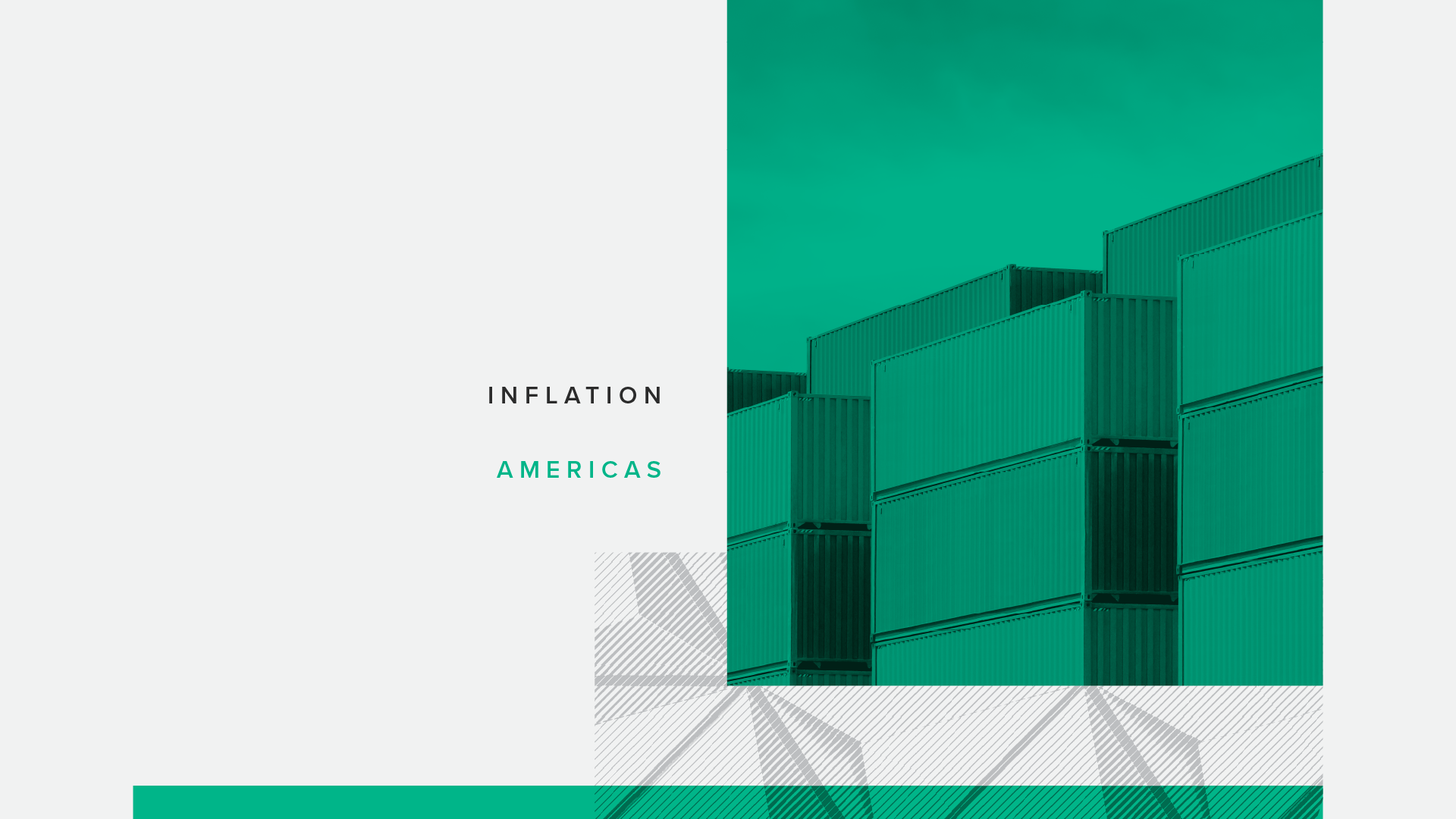 Additional findings and more information on the Supply Chain Indexes of Consumer Inflation Pressures can be found in the full report.

Last month, Morning Consult launched the Supply Chain Indexes of Consumer Inflation Pressures, five indexes that track supply chain disruptions and inflationary pressures from the consumer perspective. Two of the five indexes measure the degree to which consumers were unable to complete a desired purchase due to limited supply (Unavailability) or higher-than-expected prices (Price Sensitivity). For purchases that were completed, the remaining three indexes measure those that resulted in trading down to a cheaper alternative (Substitutability), required greater effort to find and secure (Purchasing Difficulty), or were slow to arrive (Delivery Delays). All five indexes are scored, with balanced shares of positive and negative responses captured by a score of 0. Positive or negative scores denote more or less of a purchasing behavior. 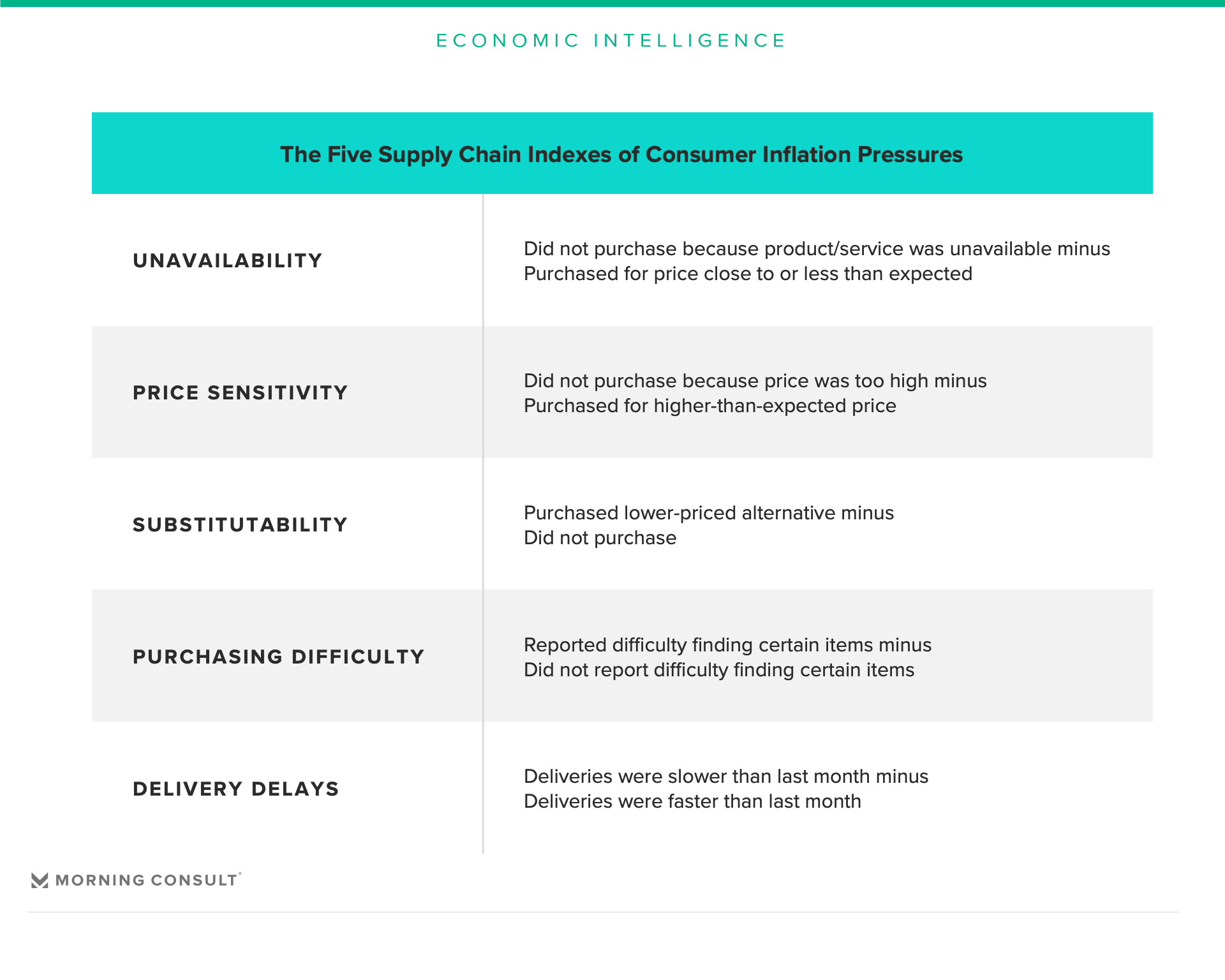 From March to April, four of the five indexes moved higher, indicating that shortages and inflation are exerting a growing influence on U.S. consumers’ purchasing behavior. Examining these index values by U.S. Census region allows for a better understanding of how different segments of the U.S. population are experiencing and responding to the current inflationary environment.

Inflation is increasingly shaping U.S. consumers’ purchasing decisions. The Morning Consult supply chain index that registered the largest increase from March to April was Price Sensitivity, which tracks the share of consumers who opted out of purchases due to higher-than-expected prices. While the pace of inflation slowed slightly from March to April, slowing price growth is not the same as falling price growth. An inflation rate of 8.3% offers little relief when wages have grown only 5.5% over the past year, and consumers’ willingness to absorb price increases is starting to wear thin as purchasing power continues to erode. 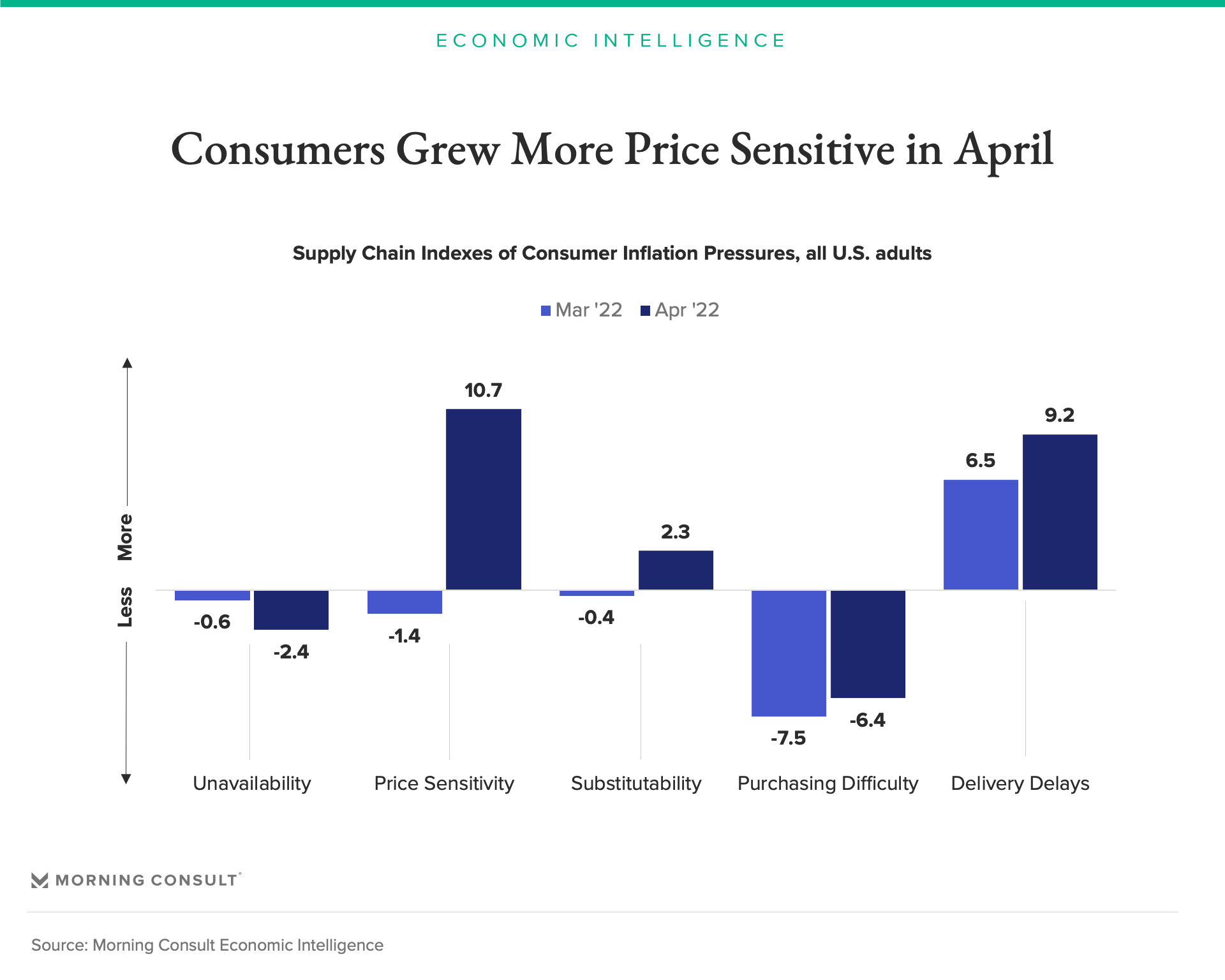 In addition to a growing share of adults who elected not to purchase various items due to higher-than-expected prices, respondents reported an increase in trading down to cheaper alternatives. The increase in the Substitutability index marked yet another sign of growing frugality among consumers. Price concerns have been especially prevalent over the last two months among households earning less than $50,000 per year. This group already had the highest Price Sensitivity and Substitutability scores in March, and they registered increases in both indexes in April.

Low-income consumers are often thought of as being liquidity constrained, with even small changes in purchasing power potentially leading to big changes in purchasing behavior. Interestingly, however, households with annual incomes of $100,000 or more recorded the largest increase in the Price Sensitivity index in April. This development is consistent with lower-income households being the proverbial “canary in the coal mine” when it comes to the impact of inflation on purchasing decisions. From March to April, our indexes showed these effects were beginning to creep up the income spectrum.

The degree to which supply tightness and inflationary pressure are impacting consumers varies in intensity by U.S. Census region. Adults living in the West were hampered by supply disruptions and sticker shock in April — the region’s index scores for Price Sensitivity and Unavailability were the highest in the country. In contrast, consumers’ responses to supply and inflation conditions were comparatively mild in the Midwest. However, reported delivery delays were highest in this region. Both the Northeast and South more closely resembled the West, although trading down was more prevalent in the Northeast, whereas adults in the South were more likely to forgo purchases entirely when faced with sticker shock. 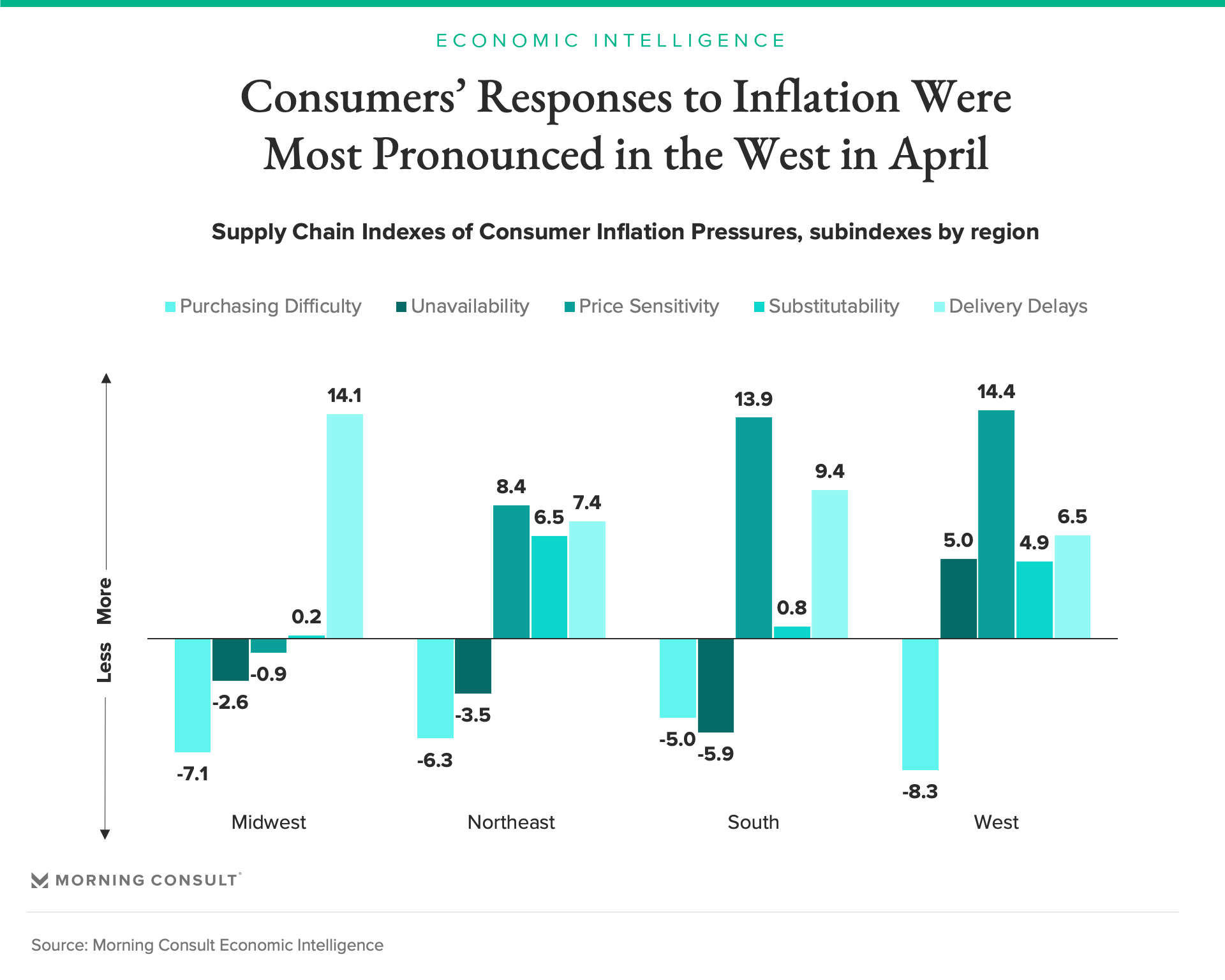 Differences in regional inflation rates over the past two months help explain the variation in index scores across various parts of the country. Regionally, the Price Sensitivity and Substitutability indexes in April were strongly positively correlated with the change in regional price levels over the past two months, with correlations of 0.85 and 0.80, respectively. Similarly, Unavailability index values also showed a moderately positive correlation with regional inflation from February to April (0.50), while Delivery Delays index scores were almost perfectly negatively correlated with regional inflation. 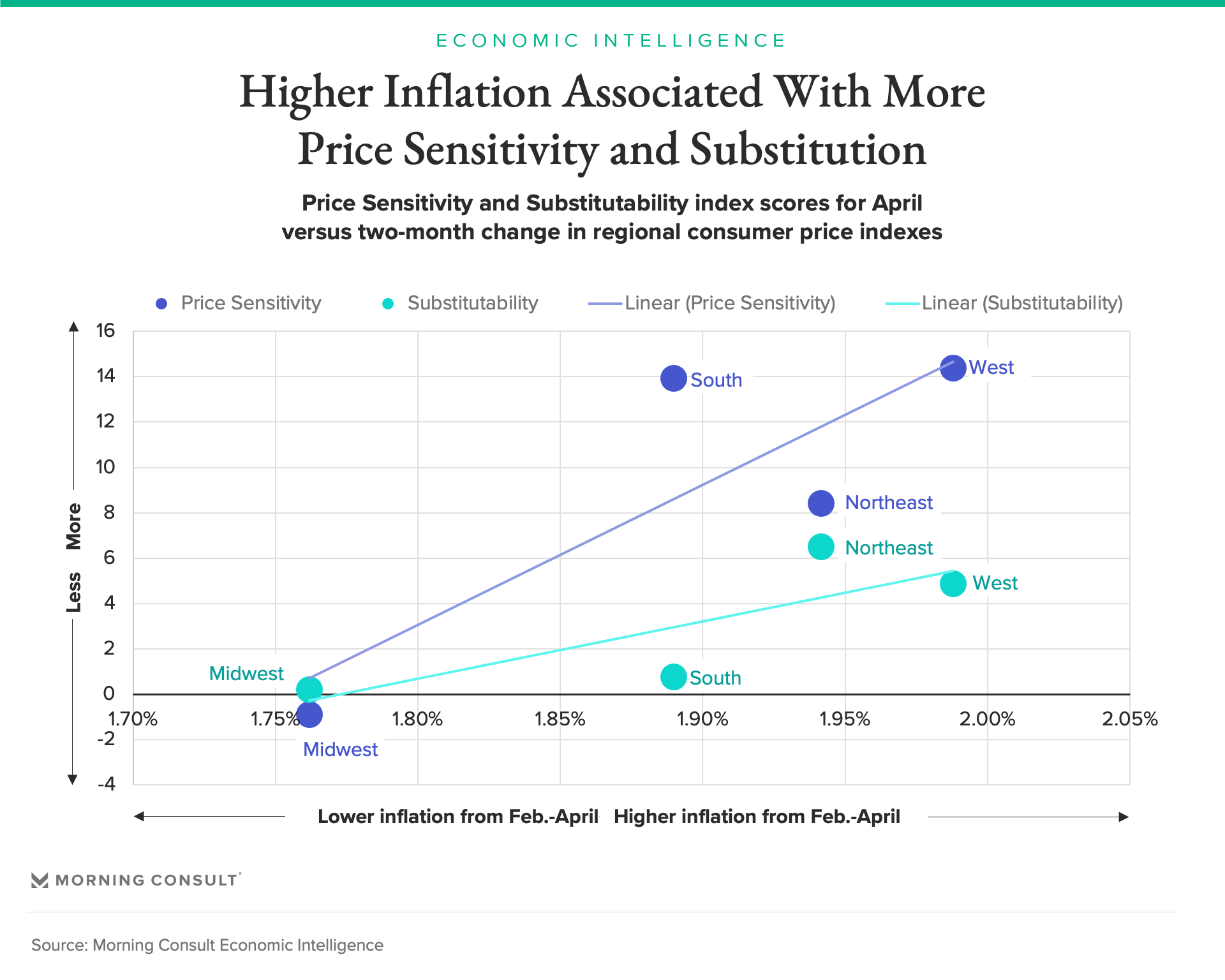 When goods are scarce, businesses tend to raise prices. But when deliveries can be delayed instead, sellers may be less inclined to increase prices for fear of discouraging purchases. The Midwest had the highest Delivery Delays index value in April, driven mostly by longer distribution lags on electronics. Most electronics are imported, and the Midwest is farther from coastal ports than other regions, which could explain the more severe delays. While inflation in the Midwest over the past two months has lagged other regions of the country, elevated delivery delays can eventually turn into unavailable products and may be a sign that pressure is starting to build on consumer prices in the region. 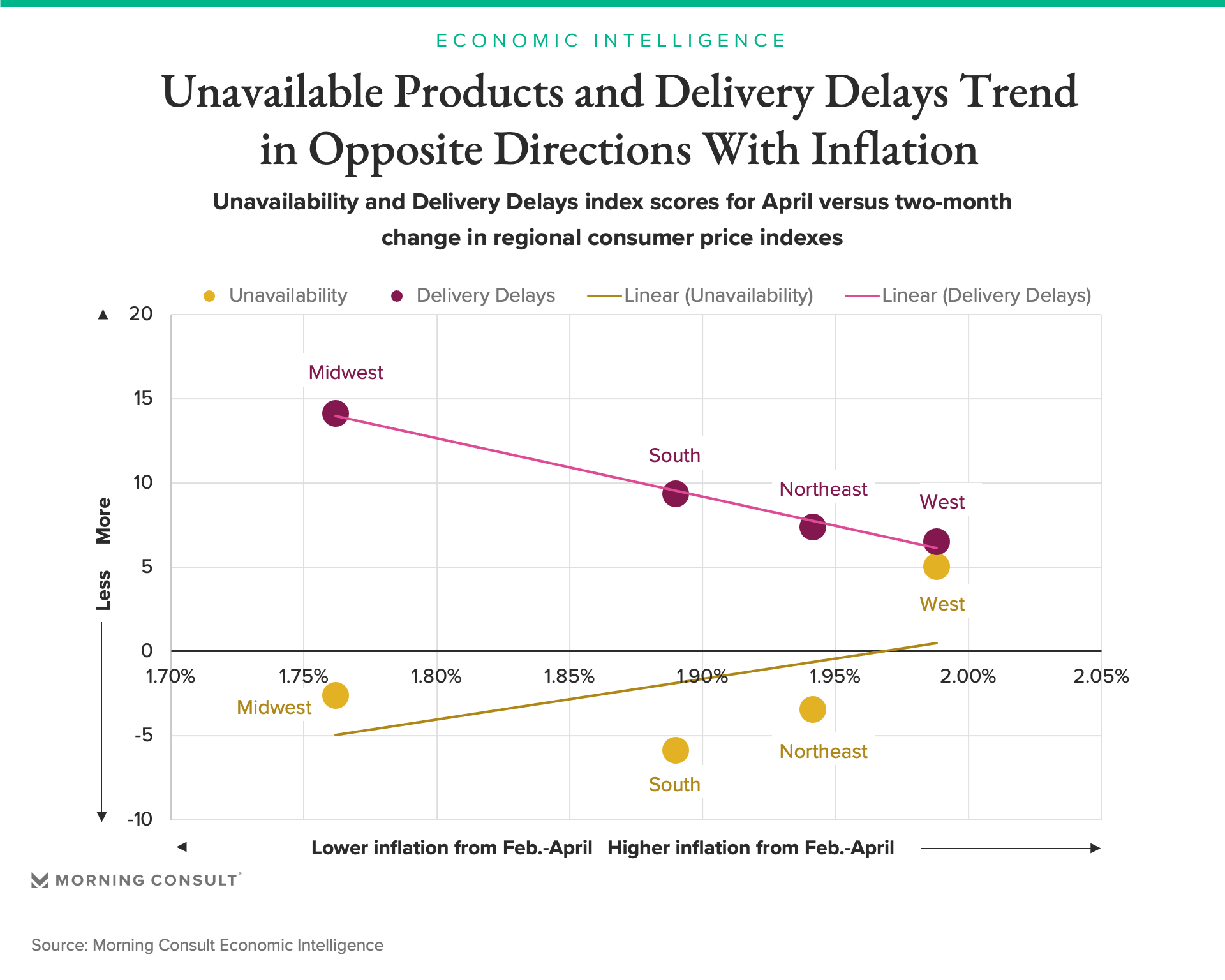 As inflation remains elevated across the country, consumers are showing a growing inclination to defer purchases or buy cheaper alternatives in response to rising prices. Although monetary policymakers have already taken steps to tame inflation, price growth looks likely to remain elevated for some time. Additionally, continued supply chain disruptions are limiting purchases for some items, especially in the West. These factors pose a headwind that may restrain consumer spending growth in the coming months.