Despite Financial Woes, Germans’ Support for Energy Sanctions Is Steady

Germans’ economic concerns are up 17 percentage points since February, but backing for sanctions continues to hold 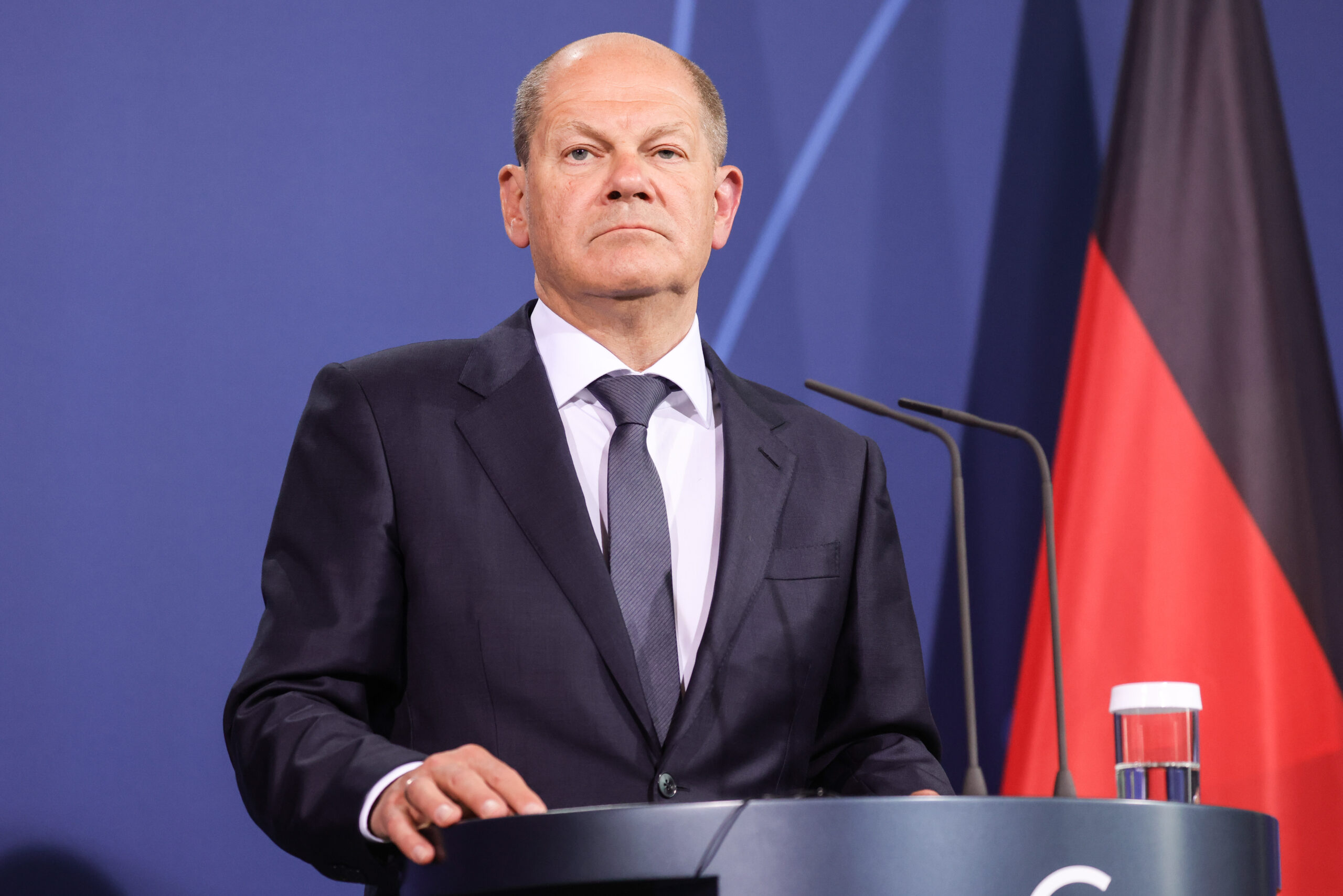 Sanctions against Russia have hurt Germans, Morning Consult surveys show, with the share who say they are financially worse off compared with a year ago rising from 36% to 53% in the wake of Russia’s Feb. 24 invasion of Ukraine. Despite this, support among Germans for sanctions on Russian energy remains steady, as Berlin scrambles to prepare for their dire knock-on effects. 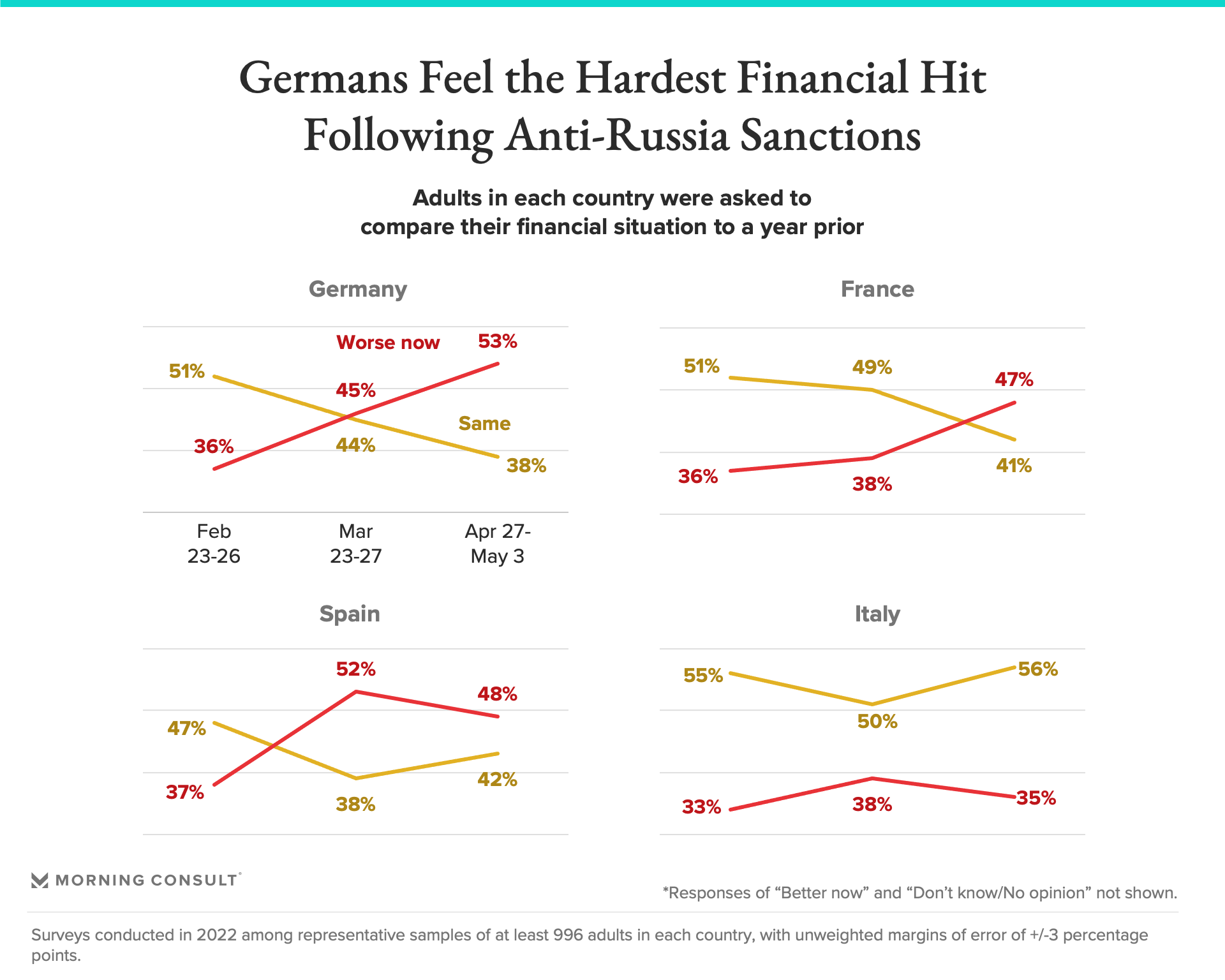 How Germans feel about their financial picture

Related: The Ukraine War Brought Europe Together. Can It Cement the Bond?

Russian President Vladimir Putin was not wrong when he said Western sanctions are hurting “the well-being of their own citizens,” with Europe’s leading economies — and in particular, Germany — taking a hit from the efforts to punish Moscow for invading Ukraine.

German Chancellor Olaf Scholz canceled the Nord Stream 2 gas pipeline in the days before the Feb. 24 invasion, for instance, and gas prices in Europe have recently spiked, with one German utility company last week announcing a 34.8% price increase effective July 1.

Meanwhile, Scholz’s government is quietly preparing for the prospect of completely cutting off gas from Russia, which still supplies 55% of Germany’s gas imports. This comes after Berlin already acceded to five rounds of E.U. sanctions against Moscow, including a ban on Russian coal, while mulling a sixth round that could include a phased ban on Russian oil.

Either move could have a dire impact on the German economy — particularly once freezing conditions hit later in the year — and leave Berlin scrambling to identify alternative sources of natural gas for heating. The latest Morning Consult surveys already show that 95% of Germans are already concerned about inflation, which is now at its highest level in four decades, and the share who are “very concerned” has risen from 43% in February to 56% in the latest survey.

Related: Germans Warm to Sanctions Against Russia, Leaving the Faltering French in Their Wake

Yet despite the widespread financial pain, Scholz has some breathing room. While France faces legislative elections next month, and Italy and Spain hold general elections next year, Scholz won’t have to face voters again until October 2025, giving him time to steady the economy.

Within his government, too, Scholz faces little threat of destabilizing dissent. The heads of the two partner parties of his coalition government — Foreign Minister Annalena Baerbock and Finance Minister Christian Lindner — are both leading the charge for European sanctions on Russian oil and gas.

In any case, financial woes from sanctions have not eroded support for energy sanctions.

Germans’ support for sanctions has been fairly static

The latest surveys were conducted April 27-May 3 and May 5-10, 2022, among representative samples of roughly 1,000 German adults each, with unweighted margins of error of plus or minus 3 percentage points.