Republican Voters Are Increasingly Skeptical of America’s Role in Ukraine

The share of GOP voters who say the U.S. is doing “too much” in Ukraine has doubled since early March 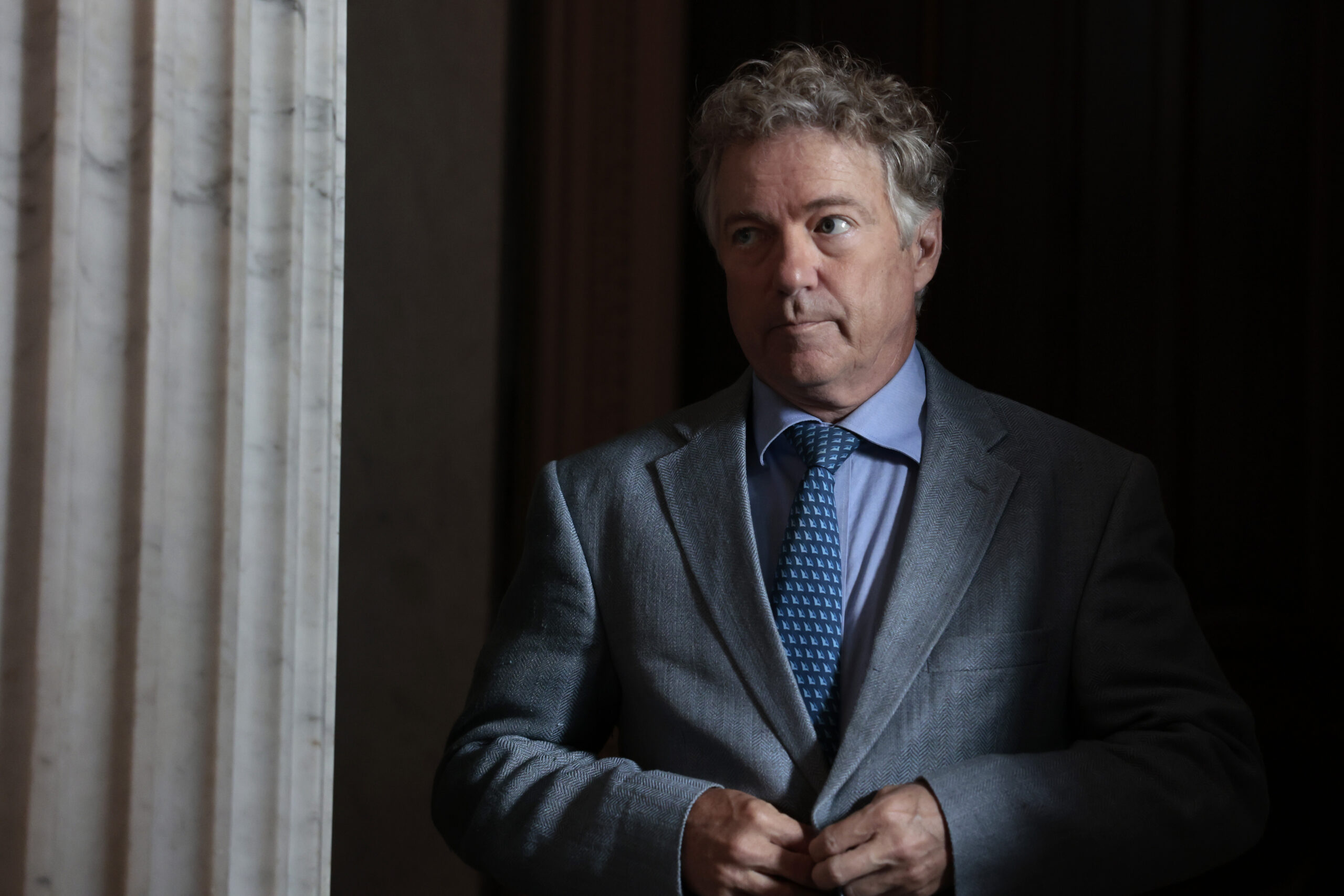 Sen. Rand Paul (R-Ky.) departs from the Senate Republicans' daily luncheon at the Capitol Building on May 5. (Anna Moneymaker/Getty Images)
By Alex Willemyns

The Senate finally passed the Biden administration’s $40 billion Ukraine aid package Thursday, with Minority Leader Mitch McConnell (R) tamping down resistance within his caucus to the bipartisan support for helping Kyiv. But with the share of GOP voters saying the United States is doing “too much” in Ukraine having doubled since the war began, consensus backing for America’s role in defending Ukraine could be at risk as November’s midterm elections near. 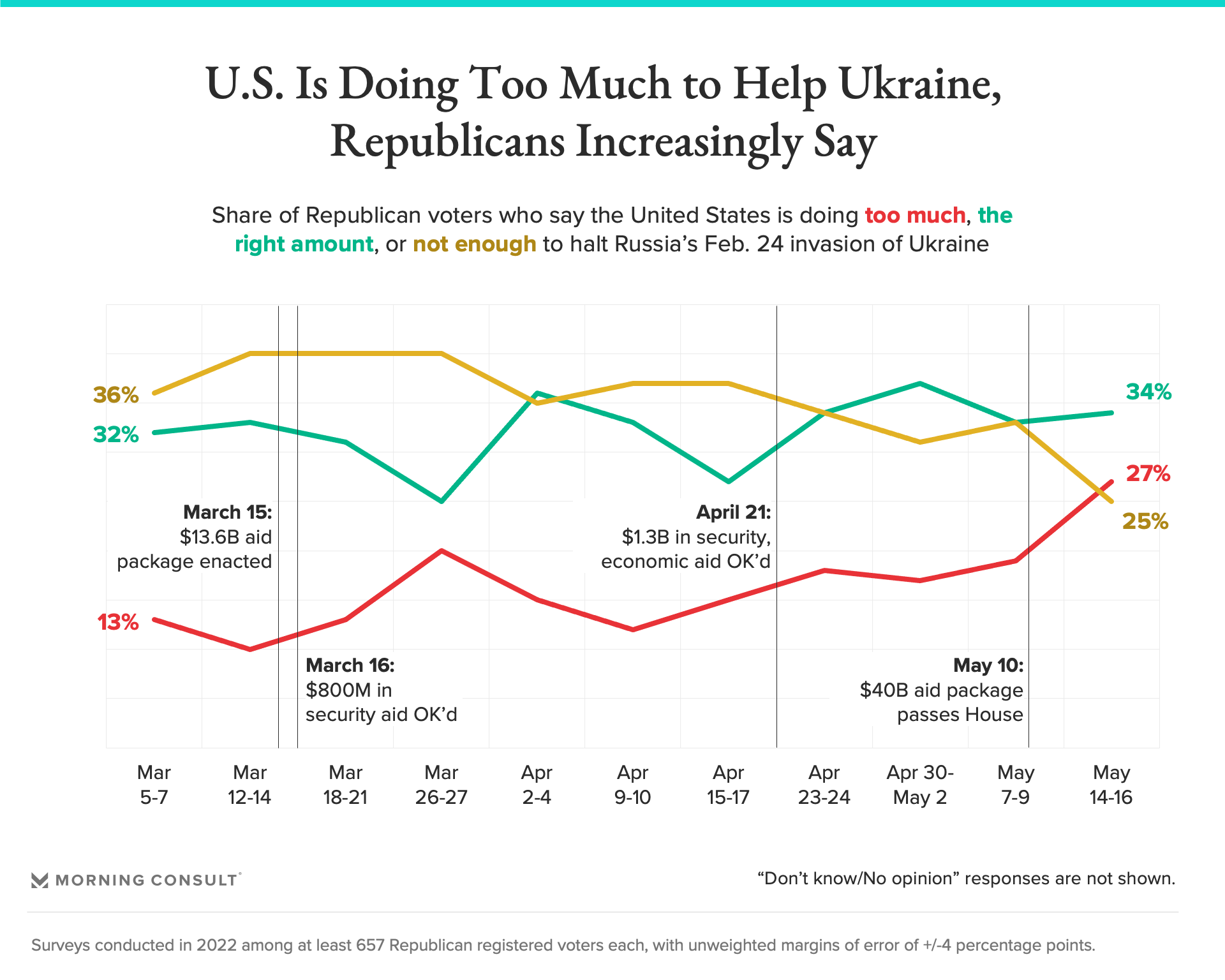 What GOP voters think about U.S. aid to Ukraine

Despite popular Fox News host Tucker Carlson’s vociferous opposition to American involvement in the Ukraine war in monologues following Russia’s Feb. 24 invasion, Morning Consult surveys initially showed most Republican voters thought the United States was either doing too little or the right amount to stop it.

But that gap has since dwindled to the margin of error, with Republicans now more likely to say “too much” is being done than “not enough.” The changing views among GOP voters have been mirrored on Capitol Hill: 11 Senate Republicans voted against the latest Ukraine aid package Thursday, including Marsha Blackburn of Tennessee, Josh Hawley of Missouri and Rand Paul of Kentucky, who had single-handedly delayed its passage.

With high-profile Senate candidates waiting in the wings like J.D. Vance — who won the Republican primary in Ohio on May 3 and calls Ukraine a “massive distraction” from President Joe Biden’s domestic problems — America’s role in Ukraine could soon be up for debate.

McConnell, who recently visited Kyiv, has argued the “isolationist voices” in his party are normal and “won’t create a problem” for continued support for Ukraine. But that could change if Republicans wrest back control of the House and Senate in November’s midterm elections and the party’s base and legislators lean further into isolationism, narrowing a path for assistance to Ukraine. 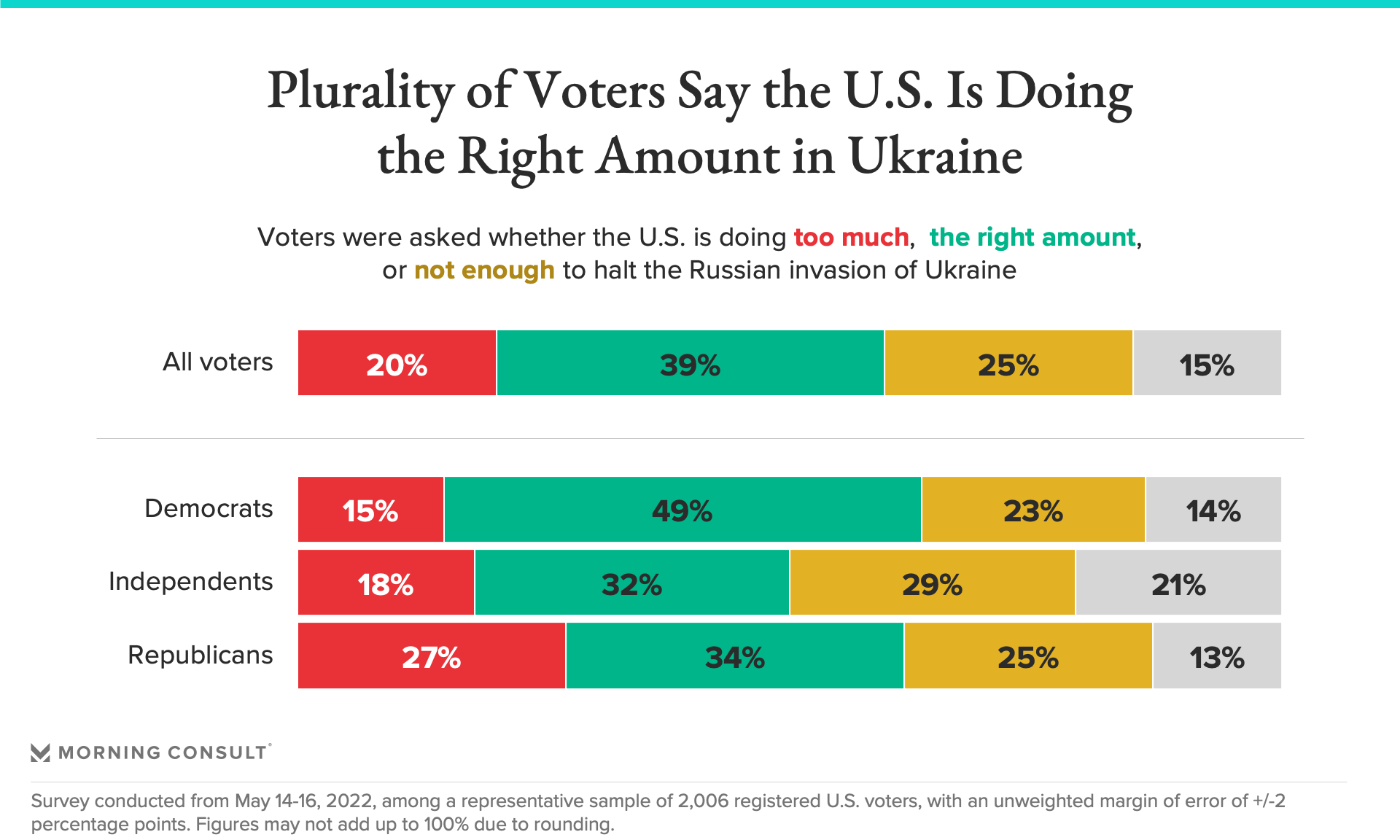 Surveys were conducted among roughly 2,000 registered voters each, with unweighted margins of error of plus or minus 2 percentage points.