About 3 in 5 workers in the tech sector said they are not interested in returning to the office full time, while nearly 2 in 5 are more amenable to in-person work 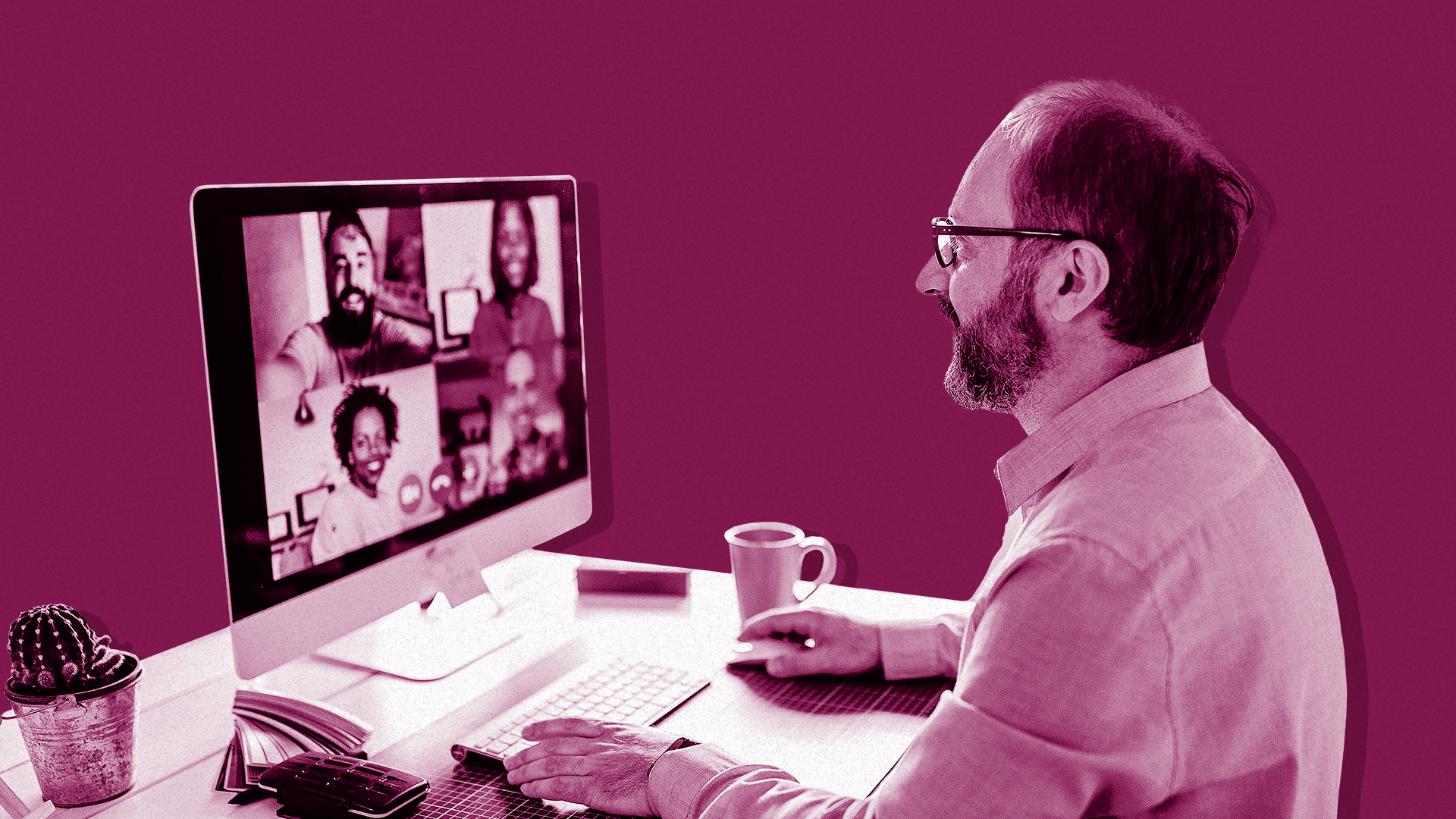 A new special report from Morning Consult explores tech employees’ attitudes toward work as the pandemic enters a new phase. The data is drawn from a survey of 750 technology workers. Other stories in the series: Many Tech Employees Say They’d Quit Rather Than Be Monitored During Work | Some Companies Are Starting to Embrace the Metaverse. Many Tech Employees Are Interested in Doing Certain Work Tasks in Virtual Reality

Tech companies approached the COVID-19 pandemic by relying heavily on remote work for their employees, but as some seek a return to the office, there are diverging views on what to do next.

Apple Inc. expects workers to come into the office two days a week and has delayed implementation of its eventual three-days-a-week policy due to a new surge in infections. Meanwhile, Airbnb Inc. said it will allow its employees to live and work anywhere, with the majority having no in-office requirement. Others are similarly embracing the hybrid work model, although it creates uncertainty about their prospects for recruiting new employees.

For tech workers who have embraced remote work during the pandemic, there is little appetite for returning to the office full time, a new Morning Consult survey found. Roughly 3 in 5 tech workers said they are not interested in a full-time return, compared to about 2 in 5 who said they are.

Survey conducted April 28-May 12, 2022, among a representative sample of 638 technology workers who work either fully remote or on a hybrid basis, with an unweighted margin of error of +/-4 percentage points. Figures may not add up to 100% due to rounding. 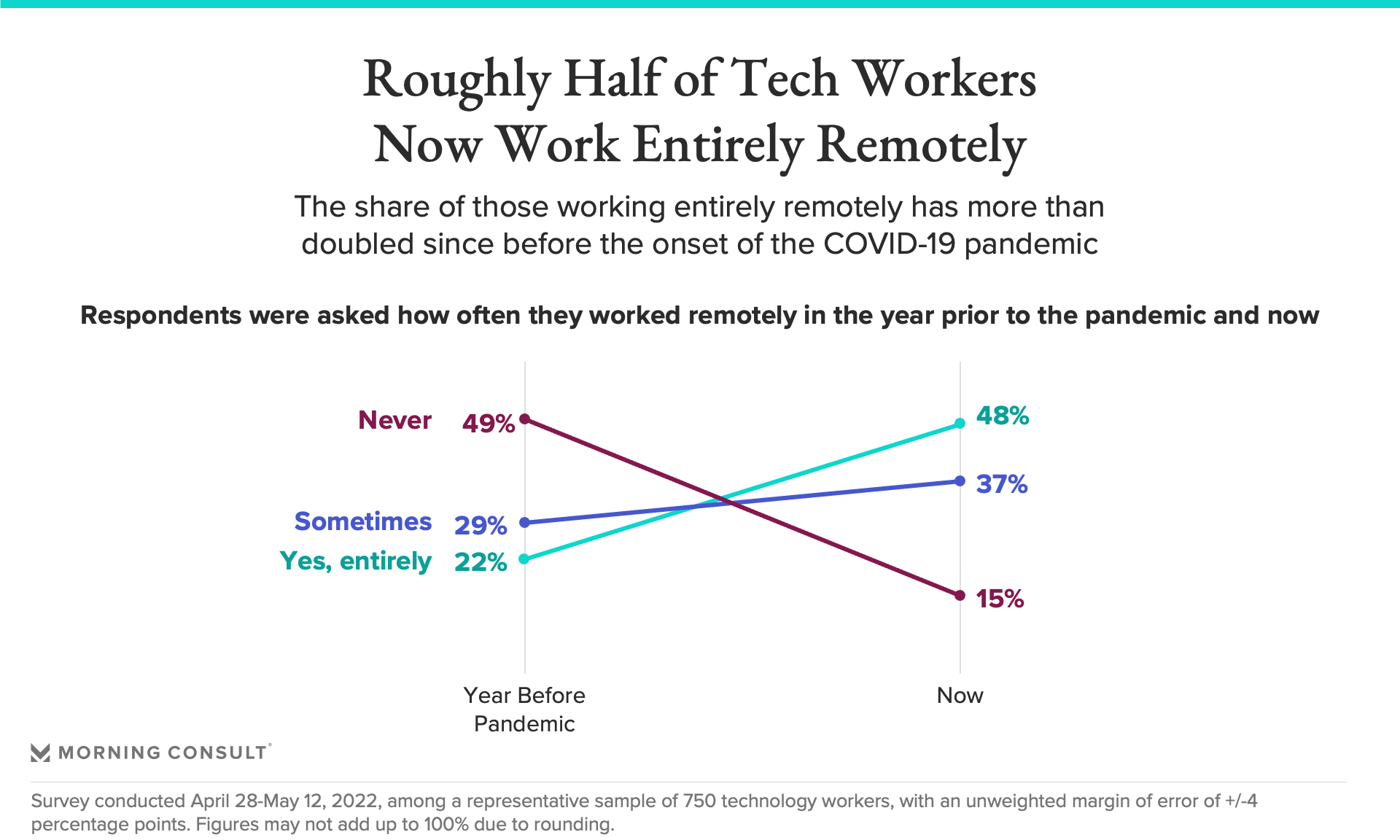 Christine Porath, an associate professor at Georgetown University’s McDonough School of Business whose research includes the future of workplaces, said the technology sector’s embrace of remote work should outlast the pandemic. Indeed, researchers at Microsoft Corp. said there is “no going back” to how companies operated pre-COVID.

“I’ve been pleasantly surprised at the flexibility that a lot of technology firms are taking right now with respect to” remote work, she said. “It seems like that’s here for good, but we’ll see if that persists.”

Employers generally have struggled with resignations, burned-out employees and a sense that many are sitting in more video meetings than before, as the pandemic threw people’s work-life balance off kilter. Some economists termed it a “Great Resignation” or “Great Reshuffle,” as workers looked to move to companies with better pay, benefits and work-life balance.

But in the tech sector, workers said they have noticed little difference in many aspects of their professional lives, including their levels of fatigue, the amount of time they spend in meetings and whether they feel burned out. In fact, roughly a third of tech workers said they have “never” considered resigning, on par with the share who said they would have felt the same in the two years before the pandemic. About 4 in 5 also reported feeling at least “sometimes” satisfied with their work-life balance. 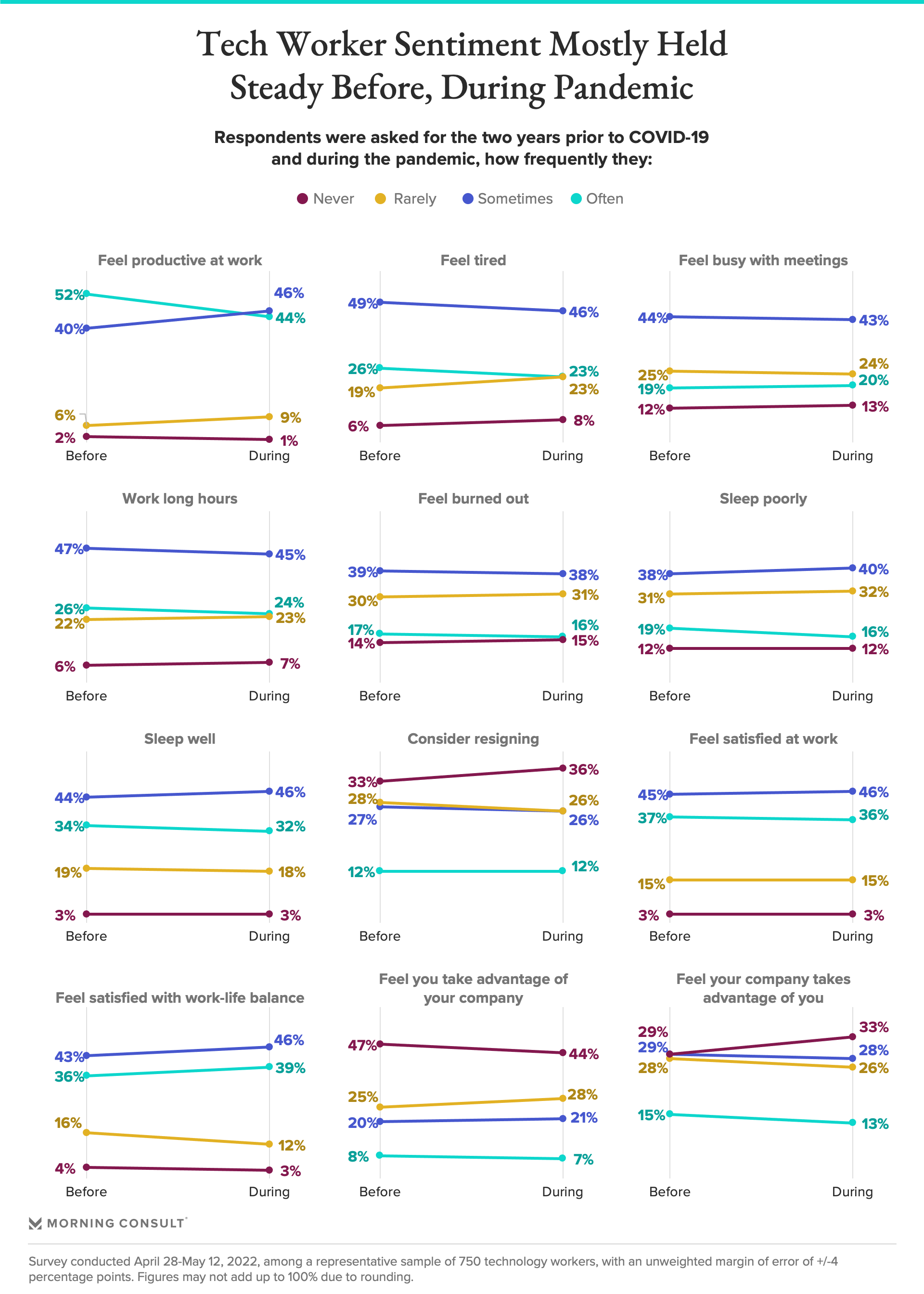 Other survey responses provide some indication as to why tech workers have felt little change in their work lives.

Nearly 9 in 10 tech workers said they have the option to telework on a full-time or hybrid basis. Two-thirds said they live within commuting distance of their company’s office.

Porath said many tech companies appear to be “ahead of the curve” on giving employees greater flexibility on when to do their work, something that likely kept them in good stead as the pandemic raged and has been borne out in a hybrid work model.

Brad Killinger, chief executive at Sapience Analytics, which collects anonymized data on employees’ work patterns to try and gain insights on how they can help them do their jobs more effectively, said that has been apparent for his company’s own employees, who are remote and have the flexibility to work whenever they like.

“One of the good things that came out of the hybrid model, most jobs have no correlation to a traditional 9-5 schedule, especially in the new digital global economy,” he said. “As long as we can maintain comfort, why do I care if somebody does something at 8 o’clock or 10 o’clock or at night, as long as they’re going to give me a core amount of effort and output on a daily basis?”

That is different from many other sectors of the economy, which were dogged by massive uncertainty at the start of the pandemic and saw employees working even harder to try and compensate.

Killinger said the company calculated two hours a day of increased effort from workers across industries during the early months of the pandemic due to those uncertain days.

“People were freaking scared,” he said. “They said, ‘My God, is the economy going down?’ The world stopped. And I think people just dove into work to try to make sure they have a job.”

Porath said despite the clear enthusiasm tech workers have for working remotely or on a hybrid basis, it will still be crucial for their employers to maintain a sense of community, especially for new hires. But she noted that those familial ties have frayed in broader society, so it is not just a workplace problem.

“If you think about over the last several decades, we don’t tend to know our neighbors as well,” she said. “That may vary if you have kids playing sports or whatever, but I think in general, we’re not as tied in, and I think people feel overwhelmed and stressed.”

Related: Many Tech Employees Say They’d Quit Rather Than Be Monitored During Work
Future of Work