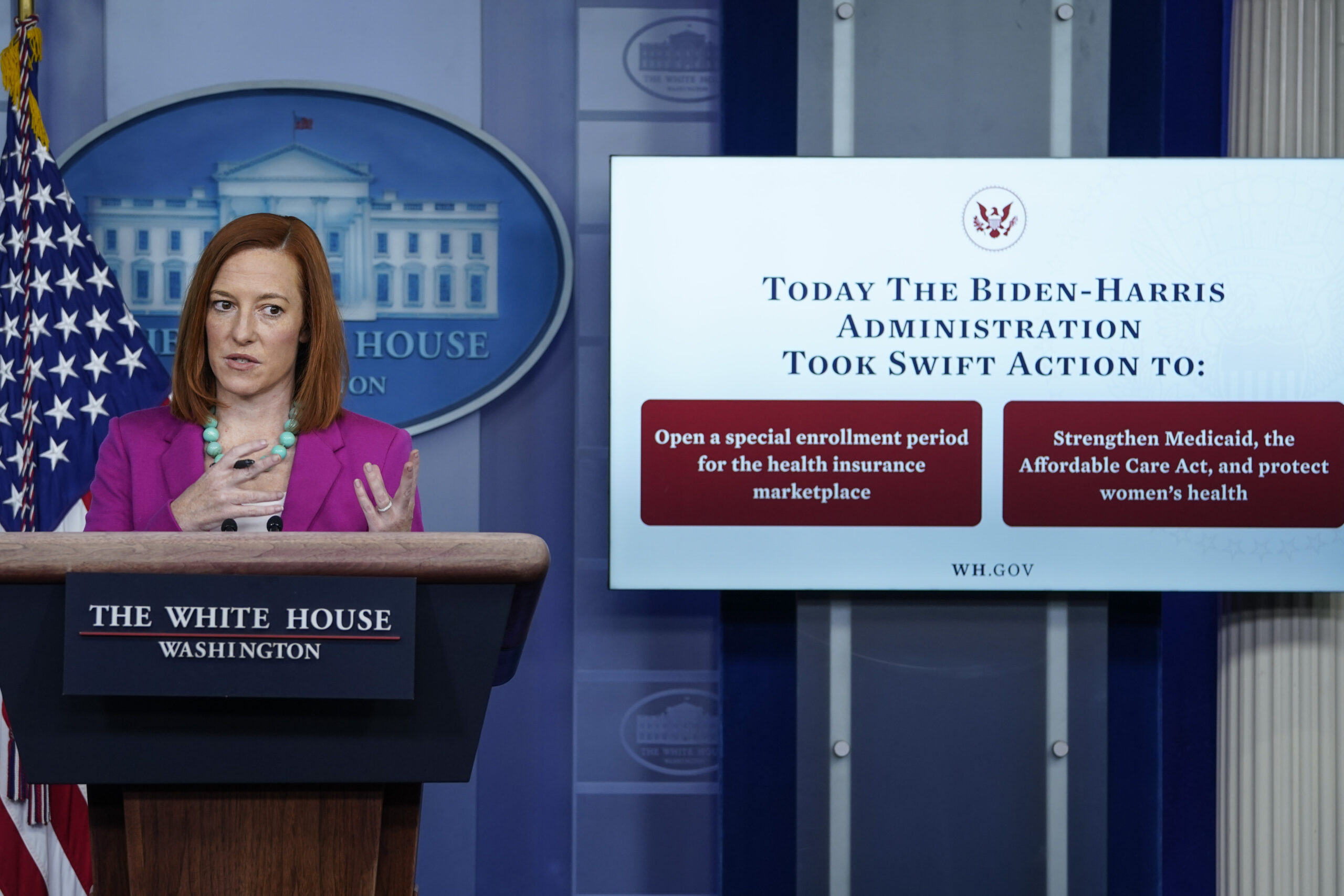 White House press secretary Jen Psaki conducts the daily press briefing on Jan. 28, 2021, after President Joe Biden signed a series of executive actions aimed at expanding access to health care, including re-opening enrollment for health care offered through the federal marketplace created under the Affordable Care Act. In 2022, people with Obamacare paid an average monthly premium of $133. Without the premium tax credits as part of the American Rescue Plan, consumers would’ve paid an average of $585 per month for marketplace coverage this year. (Drew Angerer/Getty Images)
By Gaby Galvin

While pressure mounts on Congress to prolong federal subsidies that made Obamacare coverage more affordable for millions of Americans during the pandemic, state marketplace leaders are preparing for major out-of-pocket cost increases if lawmakers don’t act — or a lot of confusion if they act too late.

A record 14.5 million people signed up for Affordable Care Act coverage this year, including 3.1 million new enrollees, driven in part by cheaper insurance options after Congress passed generous marketplace subsidies as part of the American Rescue Plan last year. The move meant individuals with incomes above roughly $52,000 became eligible for federal subsidies for the first time, and that 28% of enrollees are paying $10 or fewer per month for coverage.

After Tax Credits, Obamacare Premiums Fell Even More in 2022

States preparing for 2023 with “significant increases” in premiums anticipated

The enhanced subsidies are set to expire at the end of the year, though. Insurers are already mapping out their 2023 premiums, and early data indicates these rates are likely to surge for millions of Americans — putting them at risk of dropping coverage altogether, and carrying ripple effects for the broader health care system.

In Texas, for example, ACA premiums would’ve been 55% higher on average this year without the expansion of the tax credits. They would’ve risen by 66% in North Carolina, and a whopping 132% in Wyoming.

In California, “we are looking at significant increases in what people pay for coverage,” said Jessica Altman, executive director of Covered California, the state marketplace. Gov. Gavin Newsom, a Democrat, has proposed spending $304 million to partially offset the loss of federal subsidies.

In Vermont, meanwhile, a state group is also weighing its options, but any steps to mitigate premium increases “would take a lot of money and a lot of operational implementation costs,” said Adaline Strumolo, deputy commissioner for the Department of Vermont Health Access, where she oversees the state’s exchange.

“We don’t have a lot of direct tools to fix the problem,” she added, but “what we can do is be educators.”

Data: Centers for Medicare and Medicaid Services. States that operate their own marketplaces are not included.

A concerted push on Capitol Hill to extend subsidies before midterms

Strumolo and Altman both said they met recently with members of Congress and Biden administration officials to lay out the impact of allowing the subsidies to expire, and they appear to be getting through. A group of Democratic lawmakers is pushing leadership to pass an extension of the enhanced subsidies through the budget reconciliation process, which would allow Senate Democrats to pass legislation without Republican support.

And while intraparty fighting over more controversial policy proposals means it’s still unclear whether Democrats will be able to push a package through, the clock is ticking: If the subsidies aren’t extended, people with ACA coverage would be notified of their premium increases in October, right before the midterm elections.

“It’s never good timing for people’s premiums to go up,” said Eliot Fishman, an Obama-era health official who leads health policy at Families USA, a progressive advocacy group. But given the program’s success, the question of extending the subsidies is “a short-term political consideration, and obviously a substantive policy consideration.”

If lawmakers do pass an extension of the subsidies either later this summer or in the fall, Fishman said health insurers will be able to adjust their 2023 premiums even if they’re technically already set, a process that’s usually locked in by August. But Altman and Strumolo both stressed that a delayed decision would lead to confusion as enrollees weigh their options.

In California, for example, people with Obamacare get letters in October laying out their coverage options for the year ahead, including any premium rate increases. If the state tells enrollees to expect much higher premiums and later reverses course because Congress does eventually extend the subsidies, some people likely won’t sign up for coverage anyway “because that initial communication really does matter, and sticker shock really does matter,” Altman said.

The Biden administration’s plans for the federal public health emergency could throw another wrench in the mix. The declaration is expected to end in October at the earliest, but when that happens, states will restart eligibility checks for Medicaid. Officials hope to transfer those who are no longer eligible for low-cost ACA marketplace plans — but if the issue of the subsidy extension is still unresolved, it won’t be clear who can get cheaper coverage beyond the end of the year.

The public health emergency’s “unwind is going to be a disaster if we don’t have affordability tools in place on the marketplace,” Strumolo said, adding that the two initiatives are “totally interdependent.”

If Obamacare Subsidies Expire, Health Care Spending Expected to Fall in 2023
Spending on hospital services would fall by nearly $4 billion

Estimated health care spending for the nonelderly in 2023

Either way, the subsidy decision will have a domino effect on the U.S. health care system. A recent Urban Institute analysis shows that if the premium tax credits expire, the number of uninsured Americans would likely rise by 3.1 million. And because uninsured people tend to skip out on some medical care, health care spending for the nonelderly would fall by an estimated $11.4 billion in 2023, with hospitals seeing the greatest dip of $3.8 billion.

Ultimately, though, state leaders are focused on the impact that allowing the subsidies to expire would have on the millions of Americans who get their coverage through the ACA marketplaces.

“As a marketplace, our role is to be a fair and unbiased resource and support consumers in any way we can,” Altman said. “We will be focusing on doing that, whether we are delivering good news or bad news to our consumers.”