More Than Half of U.S. Abortions Are Done With Pills. Americans Don’t Know Much About Them

Public views medication abortion as less safe than surgical procedure, despite low risks of either option 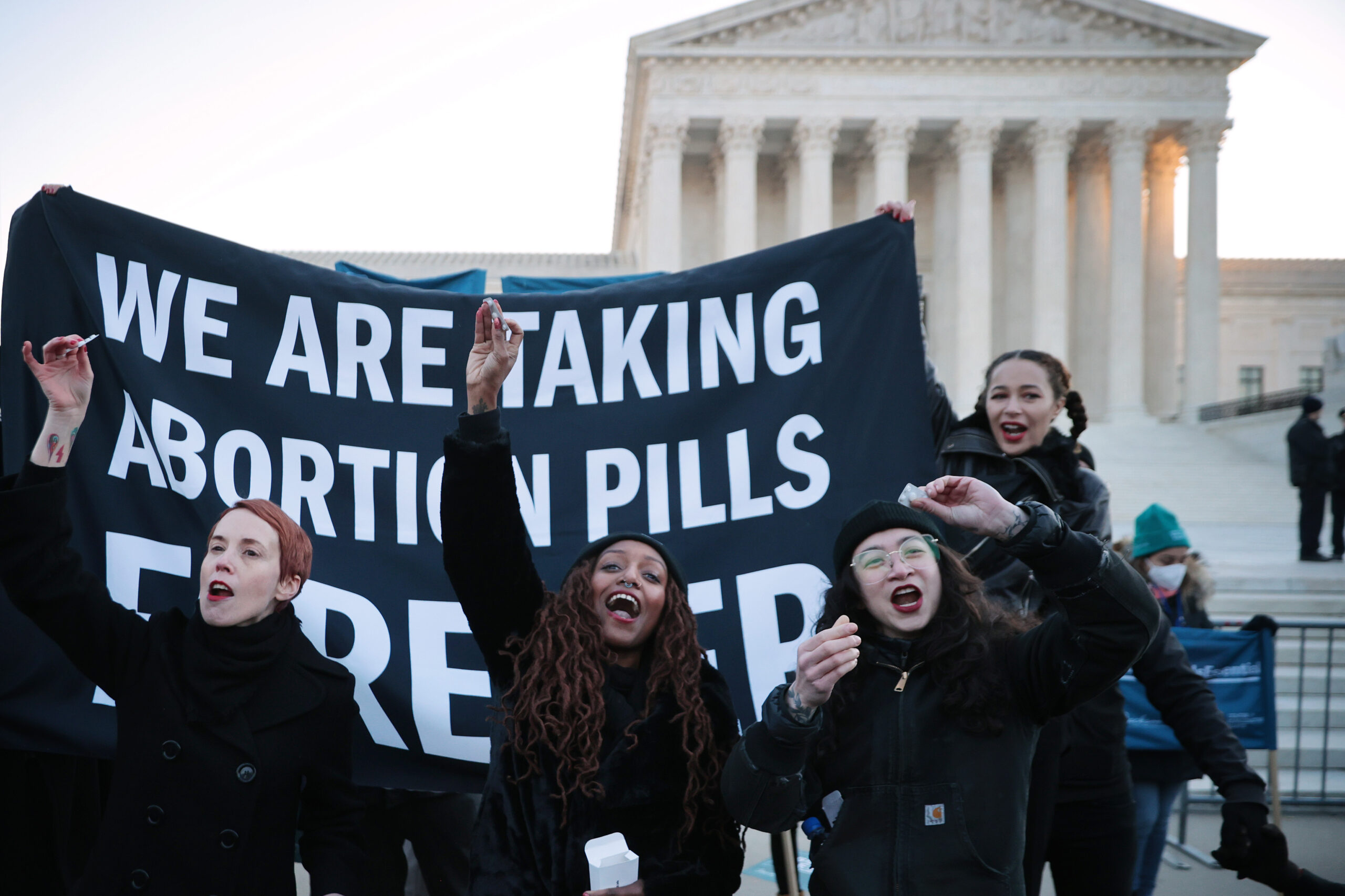 Three women prepare to take abortion pills while demonstrating in front of the Supreme Court on Dec. 1, 2021, as the justices heard arguments in a case about a Mississippi law that bans most abortions after 15 weeks. A Morning Consult survey found that nearly 3 in 5 U.S. adults haven't seen, read or heard much or anything at all about medication abortion. (Chip Somodevilla/Getty Images)
By Gaby Galvin

As states tighten restrictions on abortion, providers and advocates view medication abortion as the next frontier in preserving access. But a new Morning Consult survey indicates the American public doesn’t know much about abortion pills or have a clear sense of how people should access them.

Medication abortions, which use pills to terminate early pregnancies at home, have been around for decades and now estimated to make up more than half of all nonhospital abortions in the United States. Advocates believe that share will only grow if the Supreme Court strikes down Roe v. Wade this summer, reversing federal abortion protections that have already begun to erode.

Related: Supreme Court’s Abortion Ruling Will Ripple Across the Reproductive Care Landscape. Women Are Worried About Birth Control and Much More

Further, nearly 3 in 5 adults said they haven’t seen, read or heard much or anything at all about medication abortion, underscoring the messaging challenges ahead for both supporters and opponents. That’s reflected in abortion-rights rhetoric and imagery around “back-alley abortions” and “keeping abortion safe.”

When it comes to such self-managed abortions, though, “the issues are not the same as they were pre-Roe with the medical risks,” said Leah Coplon, director of clinical operations at the telehealth provider Abortion on Demand. With some states looking to penalize abortion patients and providers, the risks around abortion are now mostly legal, Coplon said.

Abortion on Demand started offering telehealth abortions after the Food and Drug Administration allowed providers to ship abortion pills through the mail during the pandemic — and then made the policy permanent in December. Telehealth abortion startups are now preparing for increased demand, with Choix Inc. announcing this week it has raised $1 million in venture capital and Hey Jane saying it’s seeking more funding to expand its services.

Some states are already taking steps to restrict medication abortion offered through telehealth, though: 14 states require in-person prescribing for the pills, for example, and seven ban telehealth abortion outright. They largely overlap with other restrictions on the procedure.

The share of U.S. adults who said people in their state should be able to access medication abortion through the following channels:

The public has mixed views on how people should be able to access abortion pills, though adults who support abortion rights were most likely to say they’re in favor of the pills’ availability during in-person doctor’s visits (70%), followed by pharmacies with a prescription (49%), pharmacies without a prescription (36%) and via telemedicine (31%).

Meanwhile, half of adults who support abortion rights said people should be required to get medication abortion pills in person — about the same share as anti-abortion adults — despite being much more likely to say states should take steps to make medication abortion more accessible.

“Medication abortion, just in general, is something that most people don’t know a lot about,” said Cindy Adam, Choix’s chief executive. “So the next level, a telehealth abortion, it requires a lot more education.”

The survey indicates that public perception on the safety of medication abortion may change when people get more information on them: 51% of adults said medication abortions were safe after they learned that the pills are FDA-approved and commonly used, up from the 45% who said as much without getting the context.

Where Americans stand on a range of state measures on abortion

Beyond telehealth, adults who support abortion rights roundly back a number of steps that states could institute if Roe falls, ranging from legal protections for abortion providers (85%) to offering financial help to abortion patients who travel to their state due to restrictions closer to home (65%).

Conversely, two-thirds of anti-abortion adults supported state policies to make it illegal to get abortion pills in the mail, while about half said states should allow criminal charges to be filed against people who have medication abortions or travel to other states to terminate a pregnancy.

About 3 in 5 Adults Back Legal Protections for Abortion Providers

The share of U.S. adults who said they would support the following potential policies in their state:

The findings underscore the already patchwork nature of abortion access, one that providers said is likely to get worse with the potential reversal of Roe. Oklahoma Gov. Kevin Stitt (R), for example, recently signed a near-total abortion ban into law that allows people to file civil lawsuits against anyone who performs an abortion or helps someone get one.

“The overturn of Roe and the restrictive laws that have already been put into place seem to be designed to really make abortion providers and people afraid to seek care,” Adam said.

As telehealth providers and advocates shore up messaging around medication abortion, they’ll also be competing with online ads and websites for groups that oppose the procedure — the digital equivalent of walking by a crisis pregnancy center, which promote alternatives to abortion and outnumber abortion clinics in the United States.

Robin Tucker, a clinician with the telehealth abortion provider Aid Access, said she has spoken with patients who browsed some of these websites and raised concerns about medication abortion’s effect on their future fertility, which medical experts say isn’t an issue.

“There is a lot of misinformation out there,” Tucker said. “A lot of it feels like it’s designed to undermine people’s feelings of safety in their care.”