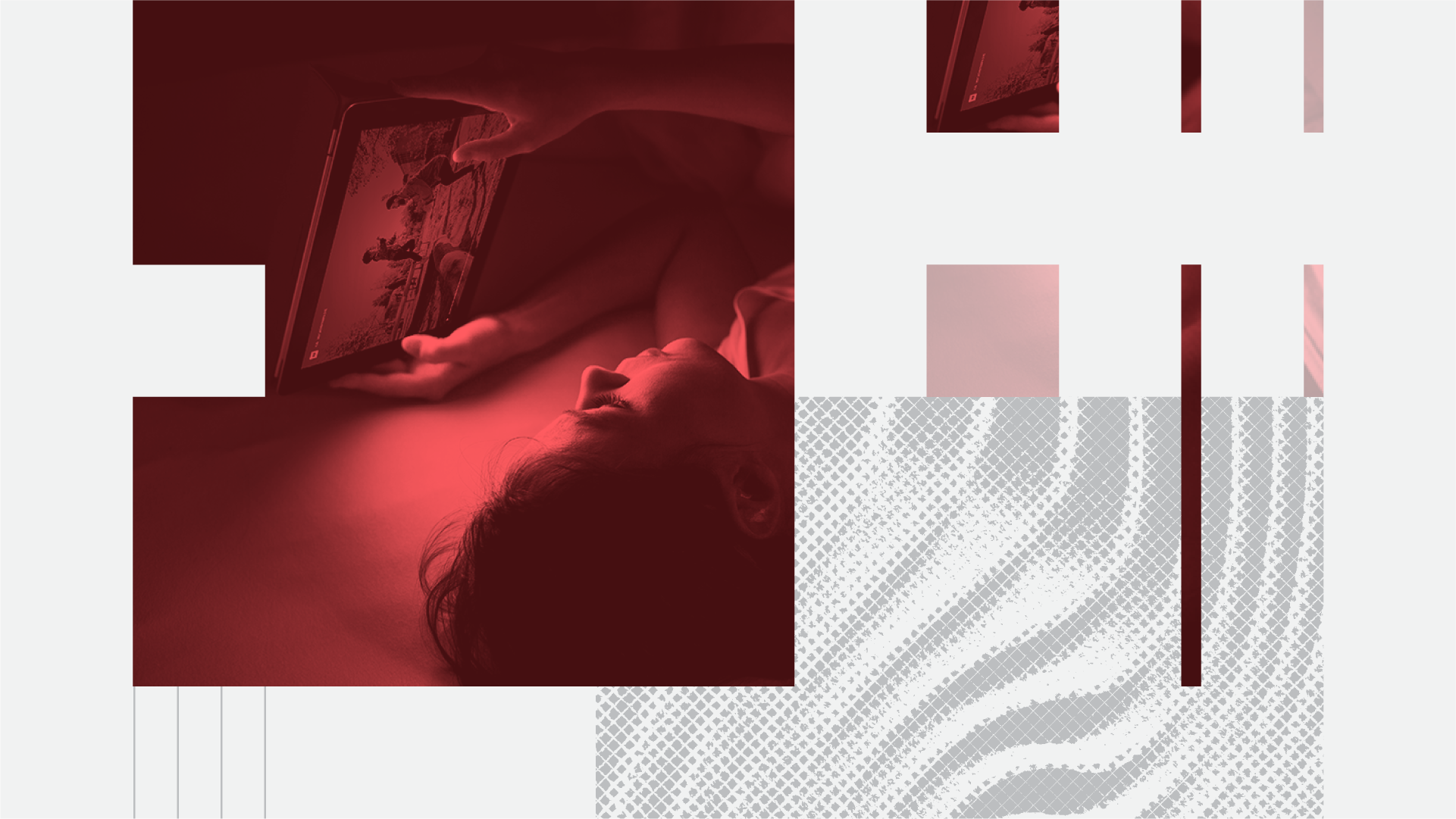 Purchasing products tied to SVOD content may not yet be widespread behavior, but that doesn’t mean companies should disregard this potential brand-building and revenue source. Gen Z has especially high interest in branded goods from video-streaming services, which hold more appeal with this demographic than other types of branded goods.

A mini wave of consumer products released by video-streaming services hit the market in the second half of last year, with Netflix and Hulu both launching shops selling goods tied to their original programming. Conglomerates like Warner Bros. Discovery and NBCUniversal, which both offer SVODs, have long sold products tied to their movies and TV shows directly through their HBO and NBC online shops, respectively.

According to data from May, 64% of Gen Z adults said they are “very interested” or “somewhat interested” in products that reference original series and movies from video-streaming services such as Netflix, HBO Max and Hulu — a significantly higher share than for the general population. The older the surveyed age group, meanwhile, the less interest respondents expressed in products tied to streaming services’ original content. 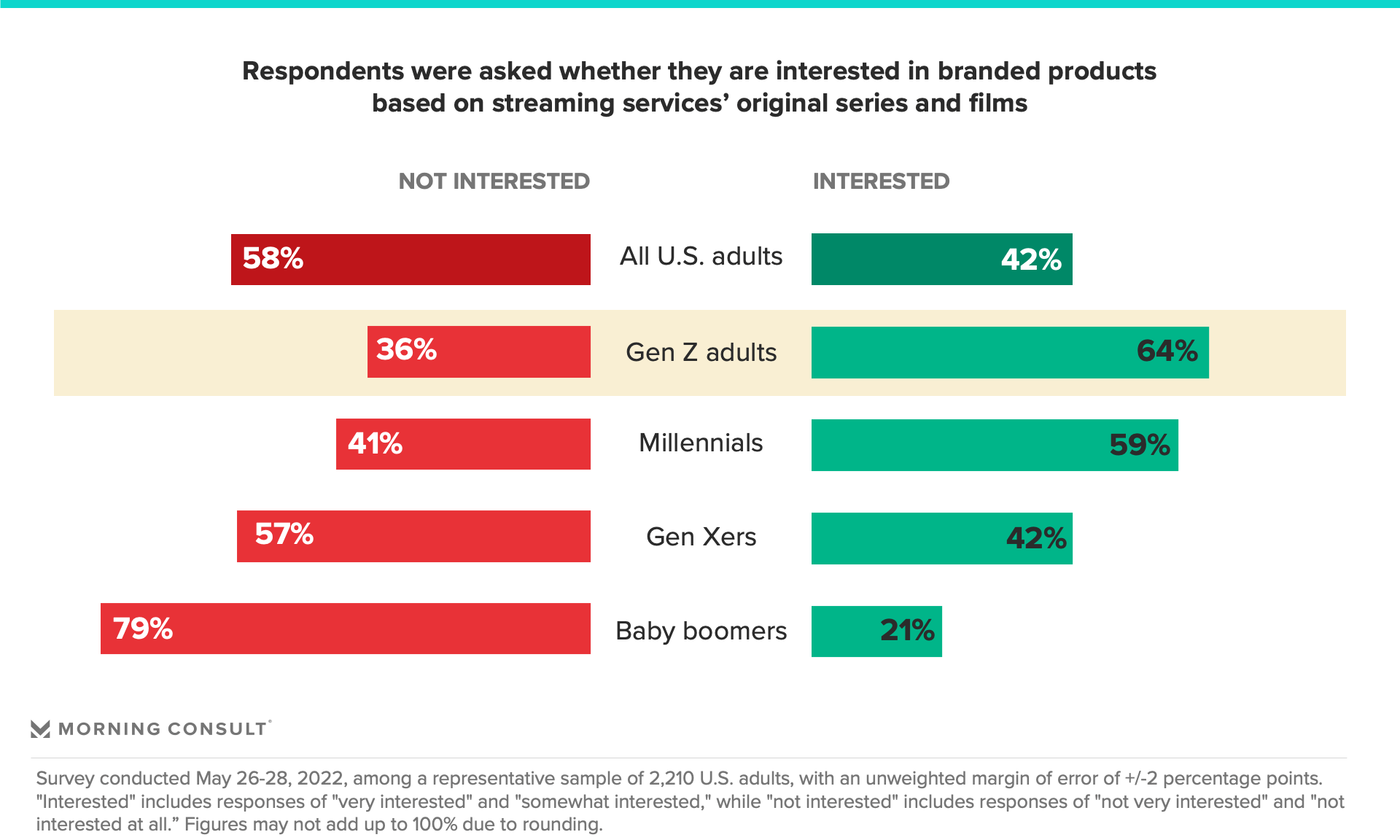 This suggests streamers’ branded products should be heavily marketed toward Gen Z adults, and also hints at how nonvideo content products like clothing could be another avenue for boosting awareness of an SVOD’s high-profile series or movie among young consumers. Furthermore, a refocused (or brand-new) SVOD-related product push would fit into the revenue diversification journey that many streamers have embarked on in light of Netflix proving how unpredictable subscription revenue growth can be from quarter to quarter.

But the data does beg the question: If younger consumers are so interested in merchandise from their favorite shows, why haven’t SVODs like Netflix and Hulu touted the success of their product pushes?

For one, awareness of such branded products is weak: Morning Consult’s November data shows that 84% of U.S. adults had heard “not much” or “nothing at all” about Netflix’s effort to sell goods tied to its content, though that figure climbed to 69% for Gen Z adults. While we asked specifically about Netflix, it’s hard to imagine there being greater awareness of Hulu merchandise, or that overall awareness has changed in any meaningful way since.

Moreover, buying SVOD-branded products is a circuitous process. Currently, many would-be customers have to go out of their way to search for an entertainment company’s online shop for branded goods and enter their credit card information at checkout — and that’s assuming they even know that such shops exist.

To remedy this awareness gap, streamers should introduce tabs on their mobile apps that let users buy products without leaving the platforms. Companies already have users’ credit card information and could easily facilitate impulse purchases that Gen Z adults and millennials — who also have higher interest in SVOD-related products — wouldn’t otherwise make if they had to seek out such goods elsewhere and re-enter their purchase information, an extra hurdle that encourages cart abandonment.

Netflix and Disney+ have particularly strong reach among Gen Z reach and have an opportunity to win over young fans of their branded products. Among the Gen Z adults we surveyed, 75% and 61% said they or someone in their household subscribes to Netflix and Disney+, respectively. No other video-streaming service had comparable figures.

Morning Consult research shows that 64% of Gen Z adults said they were “very interested” or “somewhat interested” in products tied to original SVOD content, higher than their interest levels for branded products from any other group, such as musicians, athletes or politicians.

Gen Z adults were asked if they were interested in buying branded products from each of the following:

Survey conducted May 26-28, 2022, among a representative sample of 270 Gen Z adults, with an unweighted margin of error of +/-6 percentage points. Figures may not add up to 100% due to rounding.

These types of branded goods could be promoted via streamers’ social media accounts at a time when platforms like Instagram and TikTok are aggressively investing in e-commerce. By building and maintaining an active presence on social media, streamers can tap into their follower bases to tease merchandise drops or informally gather information on the types of goods that might hold the most appeal.

The fact that media conglomerates are looking to become more financially disciplined doesn’t necessarily rule out the possibility of an impactful consumer goods push. The mantra of “quality over quantity” can apply to the consumer goods world, too: More exclusive and more eccentric product releases could still provide more overall value to a streaming service than a string of frequent clothing releases that nobody sees or buys. Just think of the notoriety New York-based art collective and viral stunt company MSCHF has achieved with its various shoe drops.