Young Voters, Who Helped Biden to Victory, Are a Big Weak Spot in the Democratic Coalition

Only 28% of the youngest Democrats strongly approve of Biden’s job performance, down 31 points since he took office 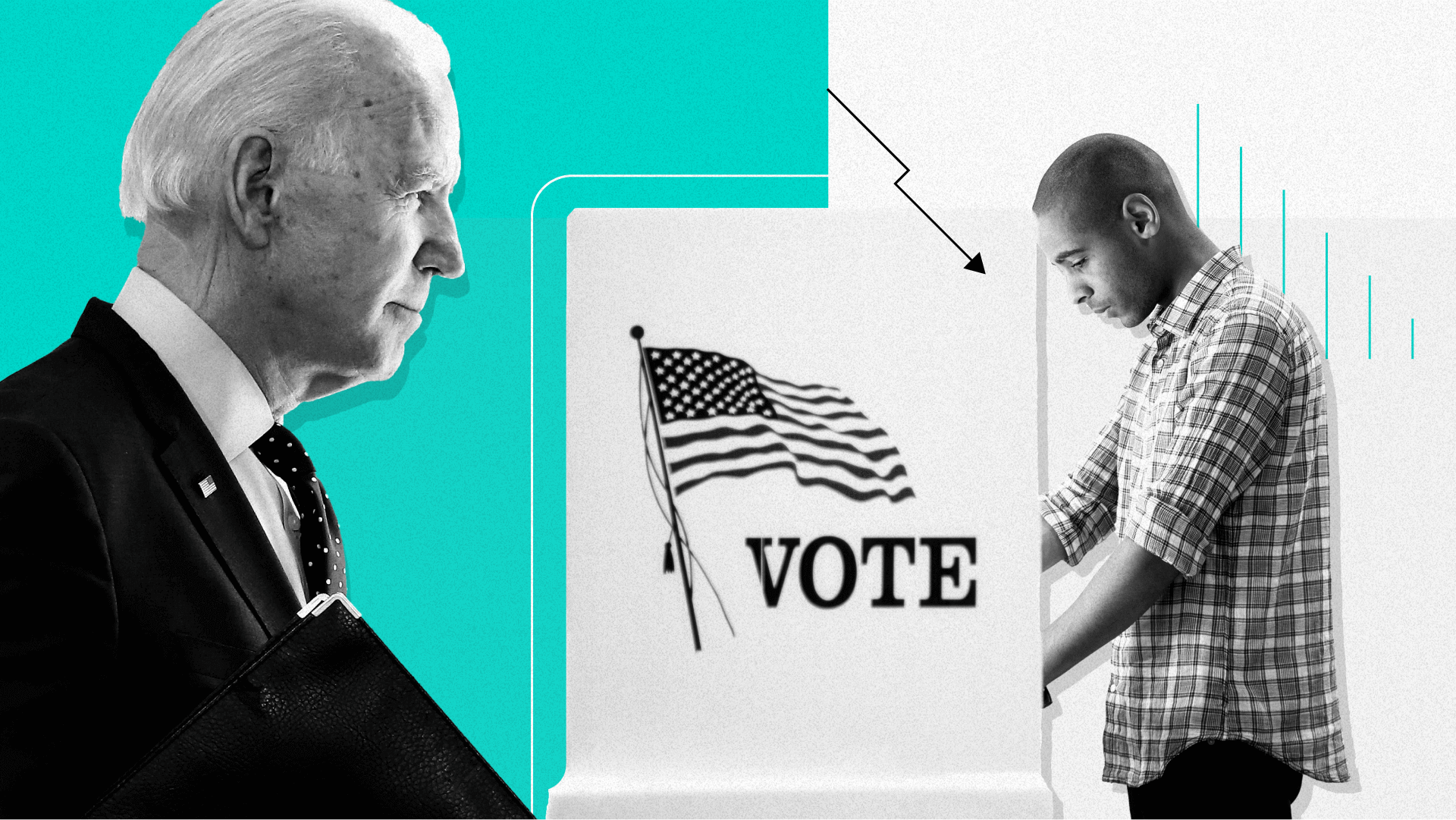 America’s youngest voters accounted for the biggest turnout increase of any age group between the past two presidential elections, helping deliver full control of Washington to President Joe Biden and congressional Democrats.

But with just under five months until the midterm elections, it’s this group of voters who present a major challenge for the Democratic Party’s fraught efforts to hold onto Congress this year: Morning Consult Political Intelligence tracking shows Biden’s decline is especially grim among 18- to 34-year-olds. The Democrats among them are less likely than their older peers to see him as prioritizing the country’s biggest problems or holding true to his campaign promises, threatening to stunt base enthusiasm ahead of the consequential campaign season. 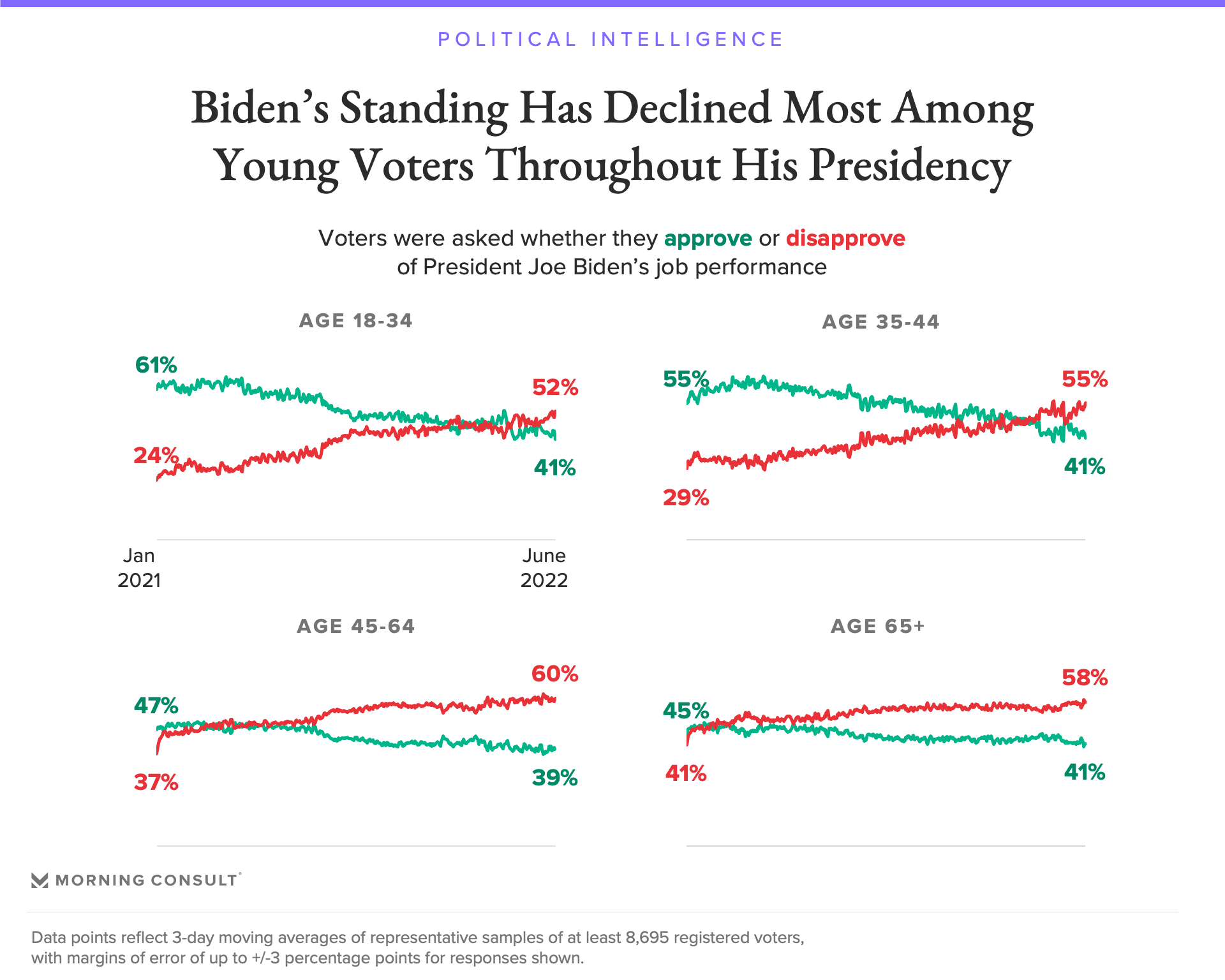 According to the latest survey data, 41% of voters ages 18-34 approve of Biden’s job performance, down 20 percentage points since he took office, while 52% disapprove, a 28-point increase during that time frame — both accounting for a larger shift than any other age group.

Growing antipathy toward Biden is especially pronounced among the youngest independents, among whom negative sentiment has increased from 24% to 64% throughout his presidency – now roughly matching the level of aversion by the average independent voter. But ahead of the midterms, perhaps most alarming to Democrats is Biden’s standing among the youngest in their coalition. 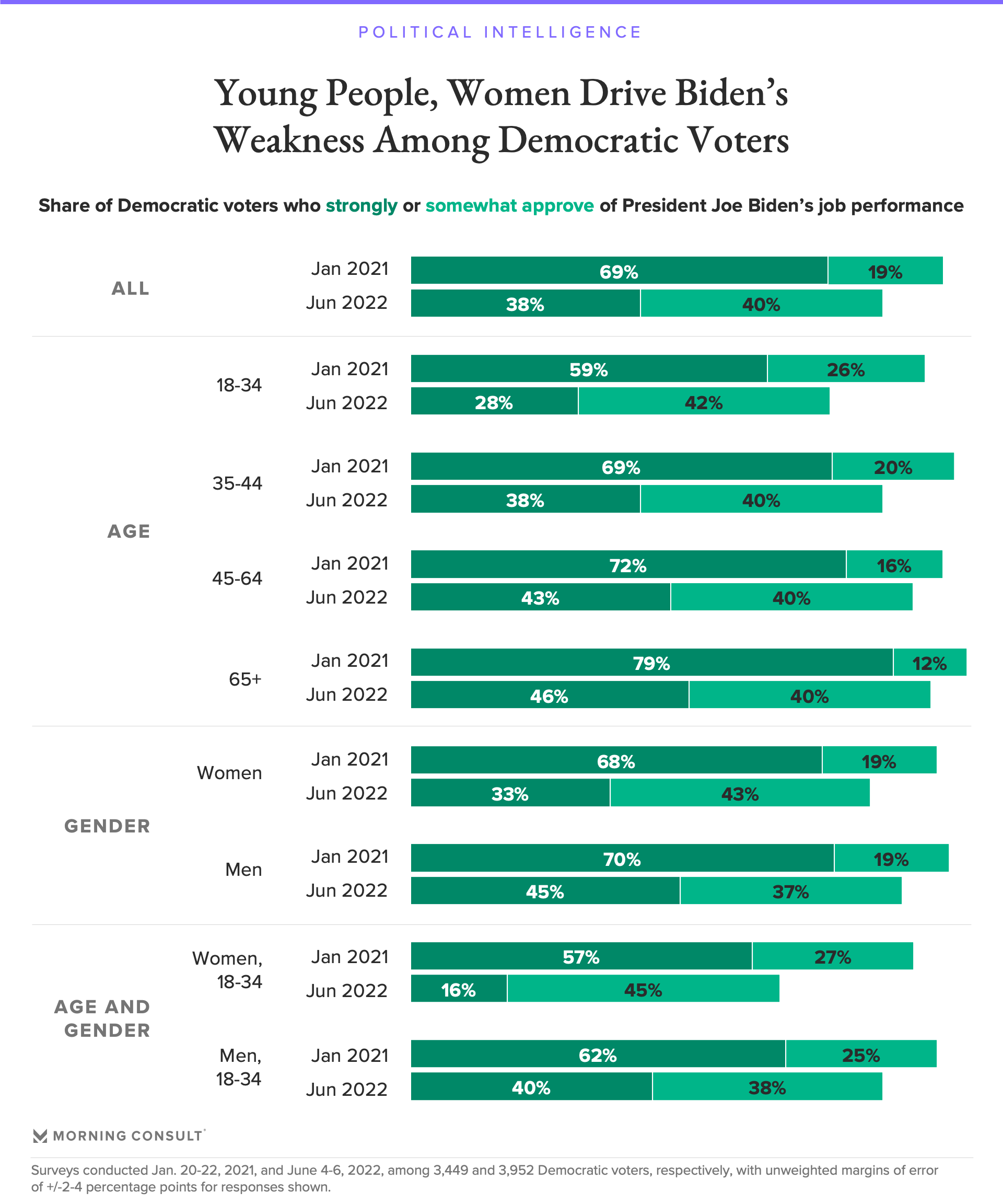 Related: Biden Has an Enthusiasm Problem With Democratic Women

Behind Biden’s problem with young Democrats

Young people — men and women alike — proved pivotal to Biden’s defeat of former President Donald Trump in 2020, and the Democratic House victory in the 2018 midterm elections. According to the Census Bureau, participation by young voters, defined as ages 18-29, almost doubled from 20% in 2014 to 36% in 2018.

A reversion to the mean could prove devastating: If a president’s approval rating is a metric for gauging voter enthusiasm in contests that become mostly a referendum on White House occupant, weakness among young Democrats could prove costly — especially given Biden’s pain with young independents.

Other Morning Consult surveys conducted in April and May suggest disappointment in the Democratic Party’s younger ranks — both with what Biden has prioritized and what he’s delivered for the American people. 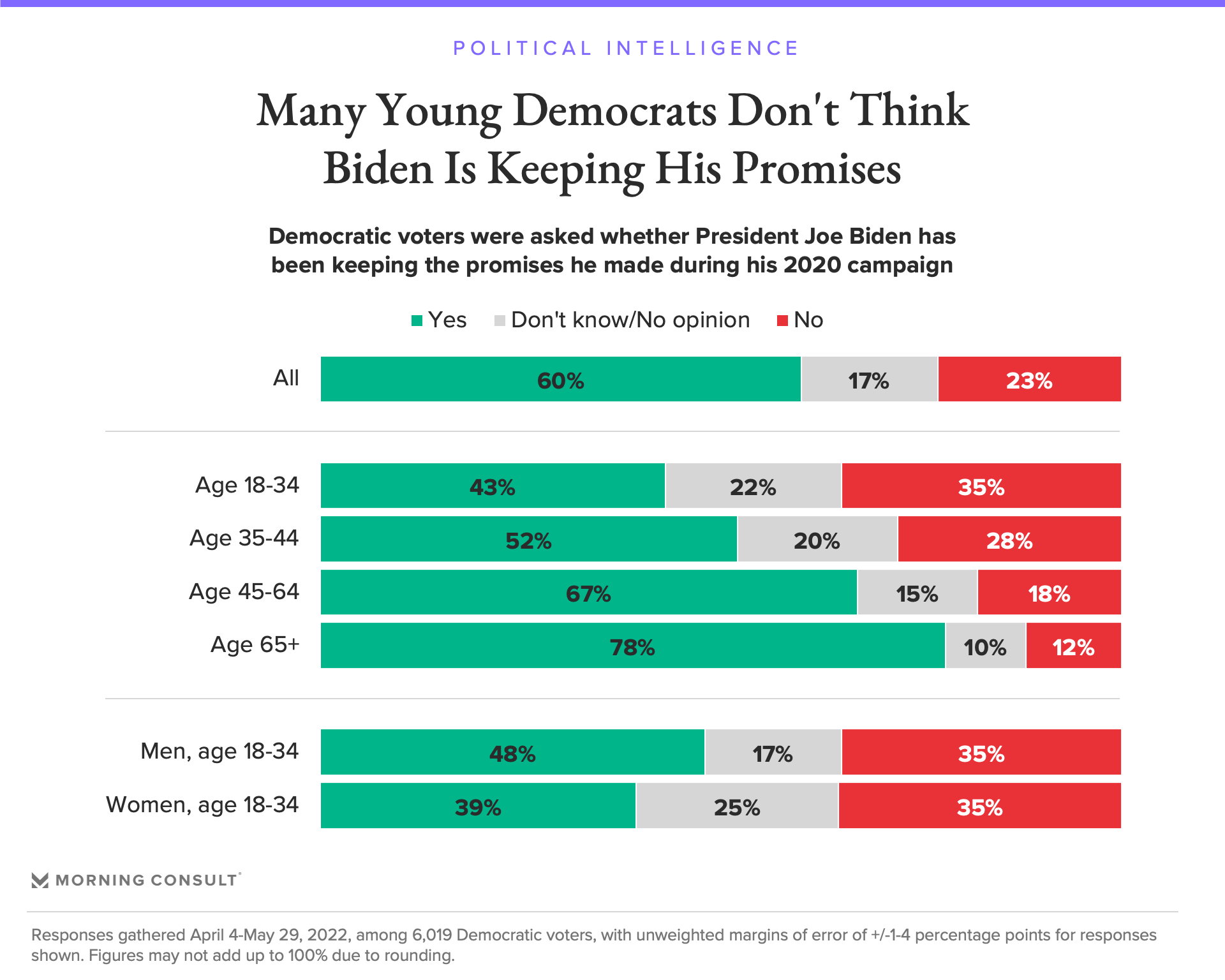 Eighteen- to 34-year-old Democrats are less likely than the party’s average voter (43% to 60%) to agree that Biden has been keeping his promises made in the 2020 election — with young women less likely to agree than young men (39% to 48%).

Following the failure of Biden’s signature “Build Back Better” domestic legislation and his convoluted approach to such issues as immigration and student loans, a quarter of young Democrats (23%) say the party is not liberal enough. When comparing against the Republican Party, the youngest in the Democratic coalition are also less likely than their older peers to say their party “cares more about people like me,” while they are more likely to agree that Democrats are “a bigger supporter of big business” or “care more about wealthy Americans.”

Those divides may be driven by voters’ priorities, on which the surveys found gaps in what the party’s voters as a whole and the youngest among them say is very important to their votes in November. 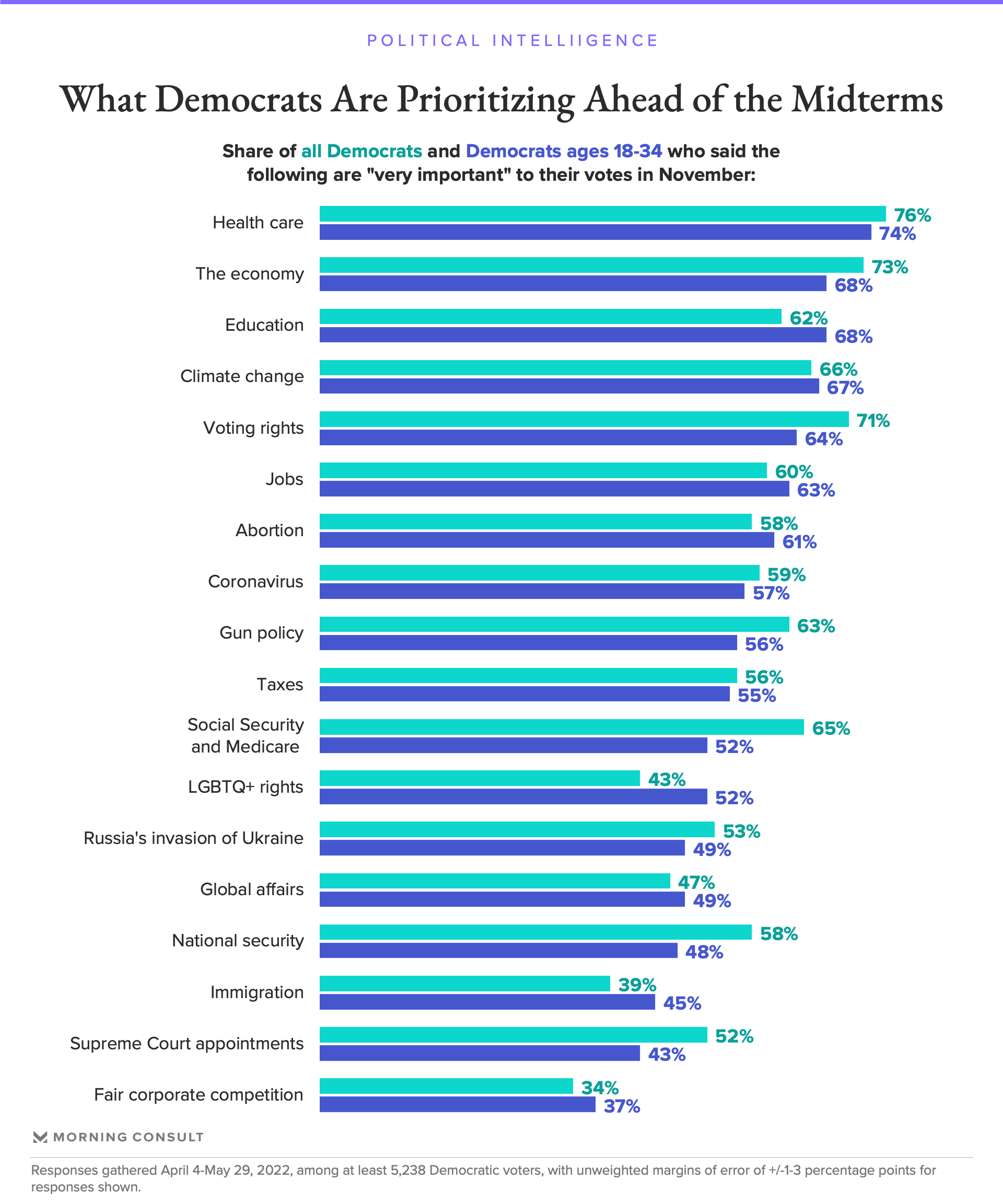 While young Democratic voters don’t skew too far from their older peers in saying issues such as health care, climate change and jobs are “very important” to their midterm votes, they are slightly more likely to prioritize issues like LGBTQ+ rights, education and immigration.

Despite that level of interest in reproductive health care among young Democrats, just a third — men and women — say Biden is making the issue a top priority, compared with 41% of all Democratic voters.

Those figures could change depending on how the Biden administration responds to the Supreme Court’s expected decision later this month to strike down the landmark Roe v. Wade decision, but on other key issues where he’s already devoted a great deal of attention, his actions do not appear to be breaking through to the party’s youngest voters. 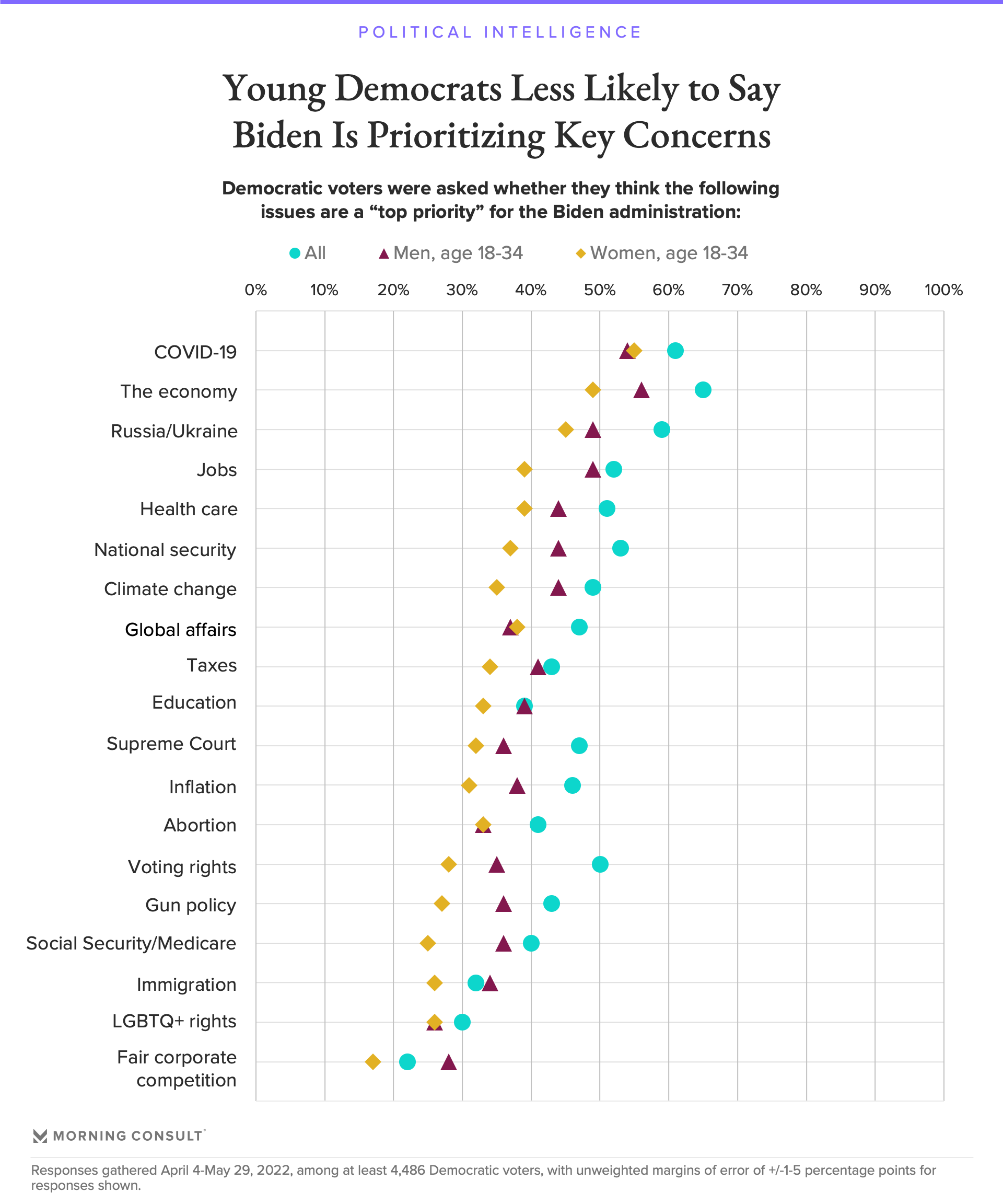 By double digits, Democrats under the age of 35 are less likely than the average Democrat to say Biden is prioritizing things such as voting rights, the economy and, specifically, bringing down the costs of goods, with a handful of sizable gaps between young men and young women.

Even the most optimistic Democrat would likely admit that the outlook on progress on these issues between now and November is dim at best, leaving the party to suffer with the question not of whether the midterms will be bad — but just how bad they may be.