Widespread e-CNY Adoption in China Is Coming, Whether Banks and Businesses Like It or Not

Nearly 1 in 5 Chinese adults have the app. For payment providers hoping to preserve market share, it's time to adapt 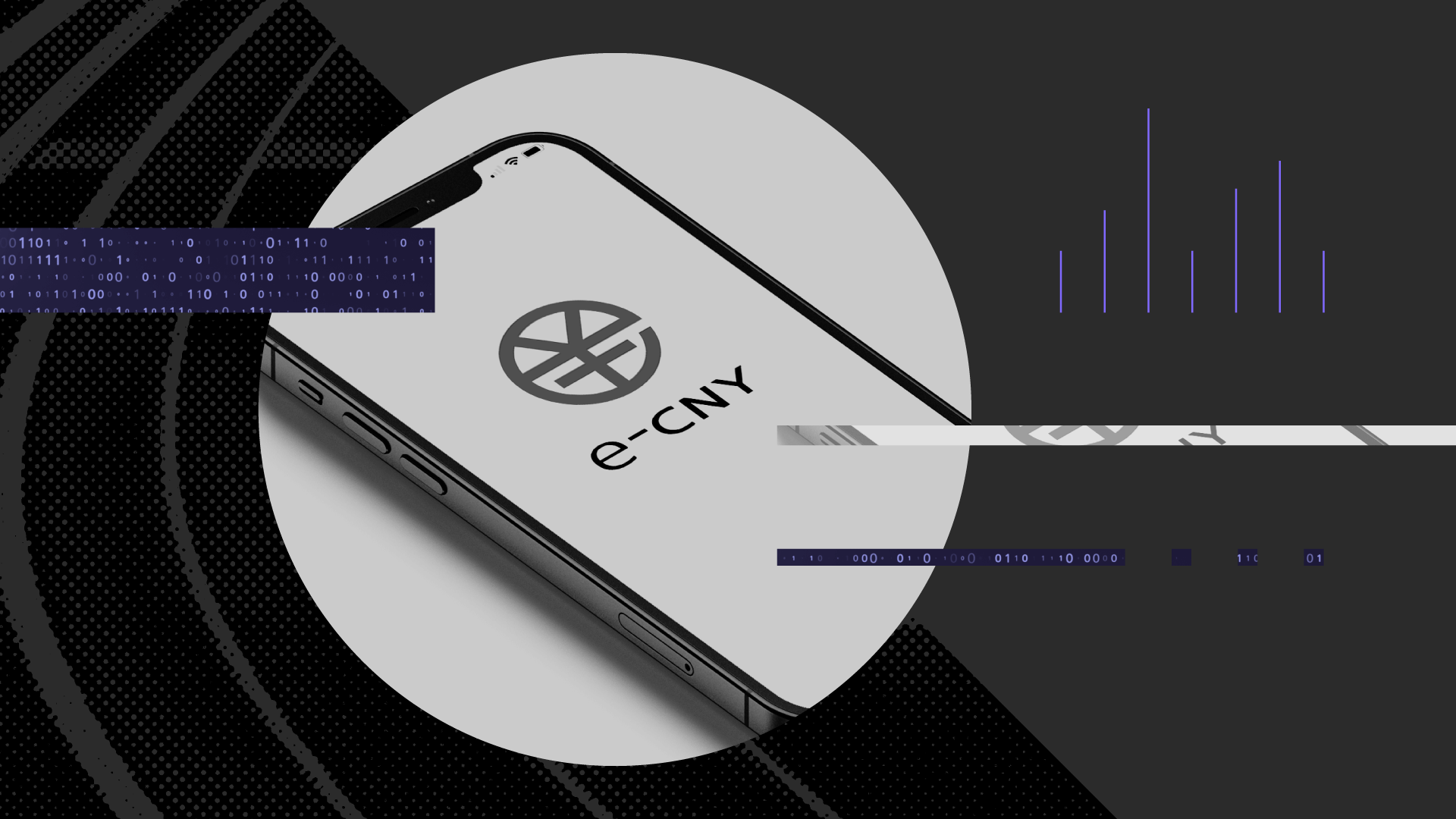 The speed and magnitude of the digital yuan rollout means retailers, financiers and governments can’t ignore it

China’s digital yuan, also called the  e-CNY, is the world’s first truly large-scale central bank digital currency. The reported number of e-CNY users — 261 million — is more than the combined populations of Germany, France, Italy and Spain. The financial sector, both in China and abroad, is interested in how quickly consumers in a large economy will adopt a central bank digital currency, or CBDC. Digital legal tender may pose a risk of disintermediation of the financial system or increased instability in the event of bank runs. If the world’s largest banking system can roll out a CBDC without falling prey to these risks, it will be an instructive example.

For their part, other countries’ governments — 79 of which are in the process of researching, developing or deploying their own CBDCs — are observing the e-CNY pilot to see how quickly government-sponsored digital money might replace both cash and private forms of digital money. There is also much discussion taking place in policy circles over e-CNY adoption as a future challenge to U.S. dollar dominance as the e-CNY participates in pilot programs for cross-border transactions.

In our latest representative survey on e-CNY uptake, Morning Consult finds that there are both challenges and opportunities ahead for widespread adoption of the world’s most advanced CBDC project.

WeChat Pay and Alipay are well-liked, but the e-CNY is catching up

At the beginning of this year, a People’s Bank of China official said that about one-fifth of the Chinese population had set up e-CNY wallets. Our May survey found that 19% of Chinese respondents said they had downloaded the e-CNY app, in line with the official number.

The e-CNY has a tough road ahead. Private digital payment apps WeChat Pay and Alipay are ubiquitous in China, together accounting for around 94% of the digital payments marketplace. They are also well-liked, with 83% of Chinese adults having at least a somewhat favorable opinion of them. But 60% of Chinese consumers also regard the e-CNY favorably. And although more than a third had not heard of or had no opinion about the e-CNY, the share holding an unfavorable view of it was on par with the shares holding the same view of WeChat Pay and Alipay.

Alipay and WeChat Pay Enjoy Huge Popularity, but the e-CNY Is Making Inroads
Respondents were asked whether they have a favorable or unfavorable opinion of each
Survey conducted May 2-7, 2022, among a representative sample of 1,000 Chinese adults, with an unweighted margin of error of +/-3 percentage points. Figures may not add up to 100% due to rounding.

The prevailing narrative in financial publications covering the e-CNY has been that the largest barrier to uptake is the dominance of alternatives like WeChat Pay and Alipay, which are fast, easy to use and accepted virtually everywhere. Morning Consult data shows this is only part of the story.

It’s true that a combined 44% of Chinese adults say they don’t use the e-CNY app because they either don’t need it (27%) or prefer using another form of digital payment (17%). But another 26% say they don’t use it because they don’t know how, and 13% cite technical barriers like not residing in a pilot city (9%) or not having a smartphone that supports the app (4%). This paints a different picture, one in which investments in educating consumers on its use and rolling the pilot out more widely could result in large gains in user uptake. 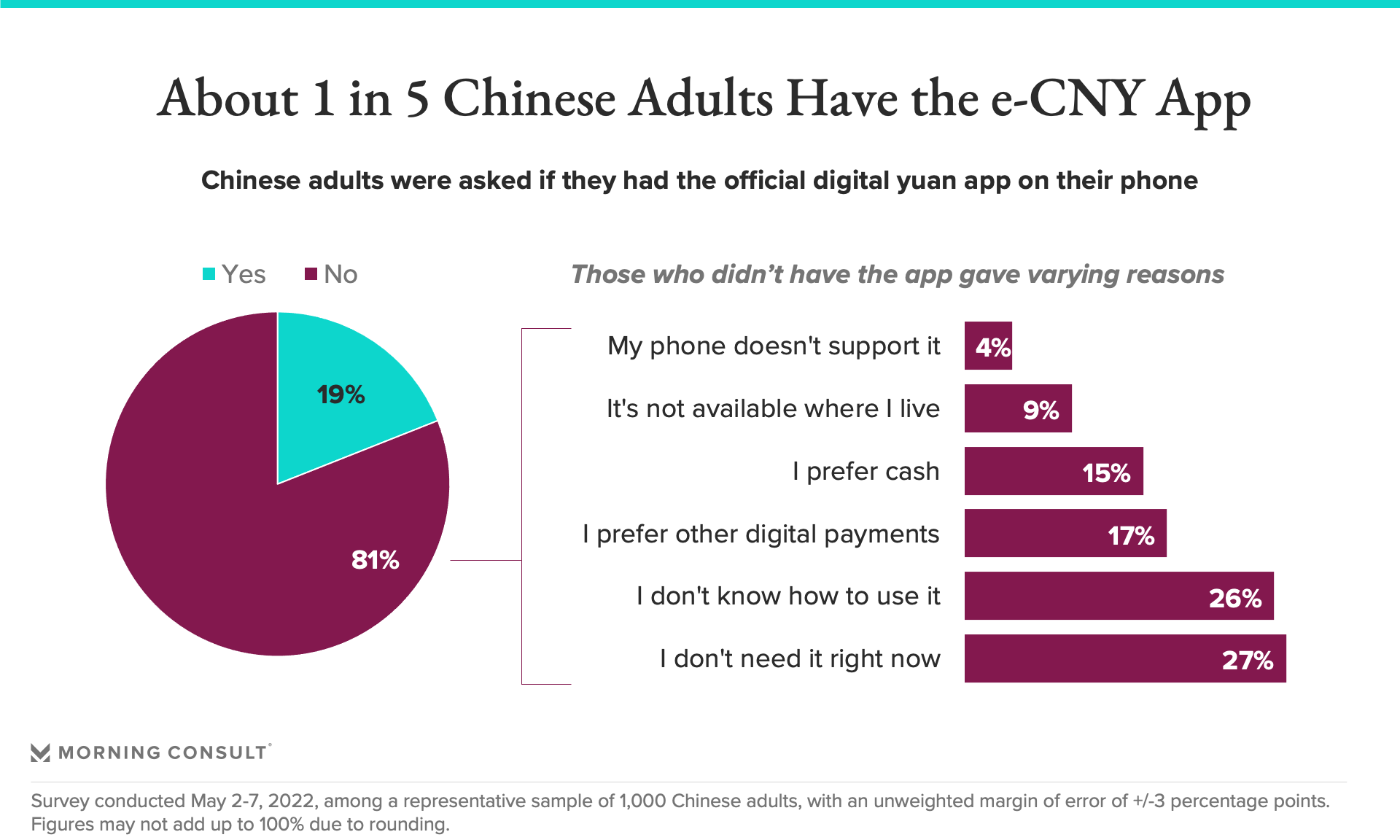 The e-CNY is mostly being used for online shopping

Of those who said they downloaded the e-CNY app (n=186), the largest shares use it for online shopping (72%) and paying for public services, such as public transportation (67%). This makes sense in light of the incentives offered under the pilot schemes, which have included discounts from online merchants and on public transit.

Most consumers aren’t thinking of the e-CNY’s potential benefits in geopolitical terms. Despite internationalization of the renminbi as a stated long-term objective of the project, the public ranked “helping China be a leader globally” dead last among possible “major advantages” of the e-CNY. “Greater independence from the U.S. dollar” was also near the bottom. In contrast, 59% of respondents said that ease of investigating corruption and money laundering would be a major advantage. In a nod to Chinese respondents’ interest in facilitating stronger government oversight of the monetary system, “better management of the money supply” tied for second.

Respondents were asked to what degree they think each of the following is an advantage to China’s state-backed digital currency:

Survey conducted May 2-7, 2022, among a representative sample of 1,000 Chinese adults, with an unweighted margin of error of +/-3 percentage points. Figures may not add up to 100% due to rounding.

The e-CNY will have major implications for retail, payment providers and financial institutions as its adoption expands

Pilot schemes offering merchants 0% fees on e-CNY transactions could continue for some time in order to encourage uptake, and the e-CNY will reportedly continue to offer lower fees than Alipay and WeChat Pay in the long run. This will appeal to retailers that have or aspire to have a presence in China — especially in the e-commerce space — but will increasingly undercut existing private sector payment providers, both foreign and Chinese. Payment providers will need to continue to find ways to integrate with the e-CNY in order to keep customers, given the government’s determination to increase e-CNY use. Allowing for greater interoperability of the e-CNY with existing payment rails will allow consumers to stick with the payment providers they know and love while still adopting the e-CNY.

Financial institutions holding Chinese assets should also closely track the rate of e-CNY adoption, in concert with other research on its tiered system, to understand the future effects of the e-CNY on depository institutions. To cite one example, if the daily limit that can be deposited into an e-CNY wallet is 10,000 yuan (around $1,500), as was the case for Shenzhen’s pilot, then based on the official estimate of 261 million users, Chinese consumers could theoretically pull around $390 billion from depository institutions in a single day in the event of a major shock. Especially if concentrated among smaller regional banks, this could accelerate bank runs, undermining financial stability.

Ultimately, all of these risks are manageable for private sector firms active in China. But with around one-fifth of the population already using the technology and the Chinese government committed to raising that number, the time to consider those risks is now.