Immigration Is a Political Liability for Biden. But So Is Immigration Reform 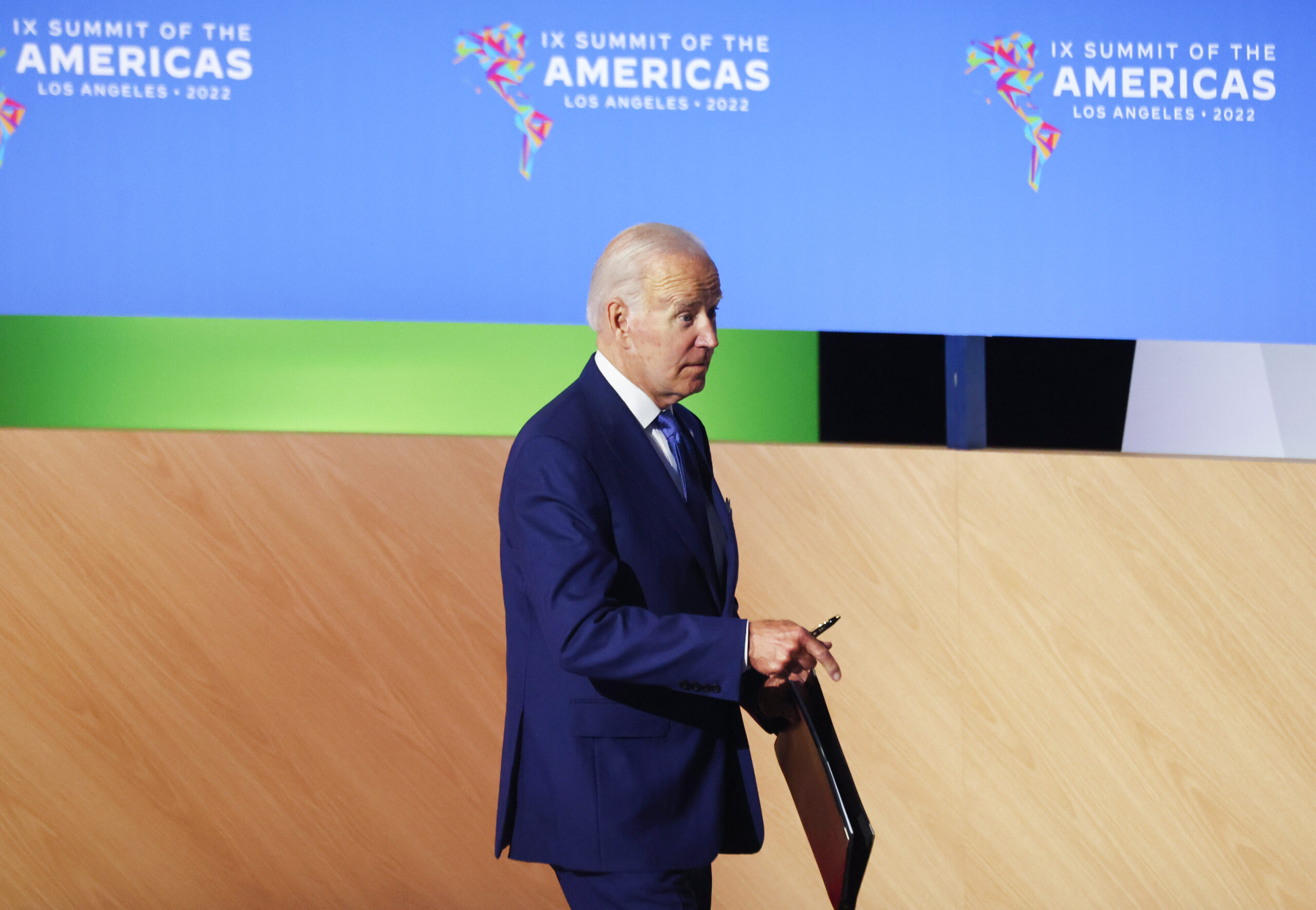 U.S. President Joe Biden attends the opening of the Summit of the Americas at the Los Angeles Convention Center on June 9. (Mario Tama/Getty Images)
By Matthew Kendrick

President Joe Biden capped off a rocky Summit of the Americas in Los Angeles last week with a major declaration on migration also signed by 18 Latin American countries and Canada, with hundreds of millions of dollars set to be disbursed to help integrate migrants into countries other than the United States. But the deal’s dearth of initiatives addressing northward migration is unlikely to burnish Biden’s credibility on the topic ahead of November’s midterms and the 2024 presidential election, instead kicking the can down the road when it comes to dealing with the countries of origin of many U.S.-bound migrants.

The administration appears stuck in a bind, experts say, as maintaining the status quo on regional migration means Democratic candidates may get hammered for not reducing border crossings, but most solutions also constitute politically unpalatable choices. 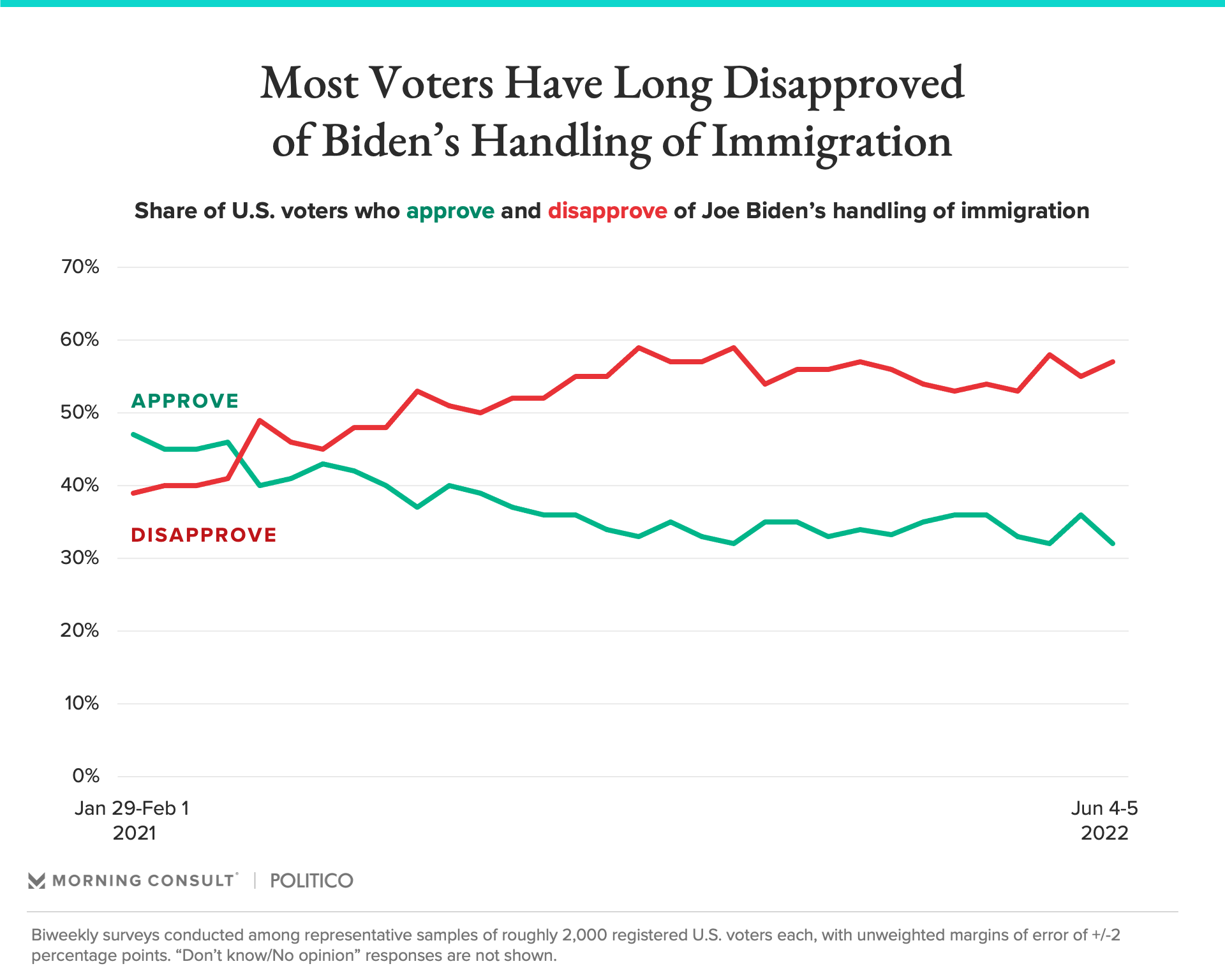 Biden went into the summit with a spate of unresolved problems but little political capital to spend: Voters have been consistently unimpressed with his handling of immigration since he came to office, and the White House has struggled to find a balance of policies that fulfill legal and humanitarian obligations to migrants — a key desire of progressives — without inviting backlash from the broader electorate.

The summit did not end without results: As part of the Los Angeles Declaration on Migration, the United States committed to taking 20,000 refugees from across Latin America over the next two fiscal years, as well as expanding temporary work visa programs. But the declaration was notably most expansive on the provision of pathways to legal status for migrants in Mexico, Canada, Spain, Guatemala and Belize — rather than the United States, where arrivals on the southern border in March and April were at a 22-year high of more than 200,000 people a month.

That was hardly a surprise, according to Brian Winter, the vice president for policy at Americas Society/Council of the Americas and editor-in-chief of Americas Quarterly.

“At the end of the day, a declaration coming from a hotel conference center in Los Angeles isn’t going to do much to address migration itself,” Winter said, explaining that the reforms needed to fix the U.S. immigration system long ago fell victim to Washington deadlock.

“This is a United States that can’t even do the easy stuff anymore,” he said. “It’s not a mystery what commonsense immigration reform would look like and we have pluralities of Americans who support things like a pathway to citizenship for the people who are already here. But we also have pluralities who support background checks for guns and we can’t get that done either.”

Related: Biden’s Pivot to Asia Has a Crucial Latin American Component That’s at Risk of Neglect

As if to underscore how solvable migration can be if the political will exists, the Los Angeles Declaration did include status regularization and hundreds of millions of dollars of aid to resettle millions of migrants — just not the ones who tend to end up in the United States.

Colombia, for instance, agreed to regularize the status of 1.5 million Venezuelan refugees. Ecuador also committed to issue a similar decree and Costa Rica renewed temporary protected status for Venezuelans, Nicaraguans and Cubans, with the U.S. government agreeing to spend $314 million to help integrate Venezuelans in 17 countries.

“We would not have said this five years ago, but suddenly most countries in the hemisphere have large numbers of immigrants thanks to Venezuela’s collapse,” noted Andrew Selee, president of the Washington-based Migration Policy Institute. “And so for the first time, you have a bunch of countries eager to talk about migration and to create some sort of order out of the large movements of people who are passing through without much control.”

The United States itself, though, has found less room for similar maneuvers, with the prospect of regularizing millions of undocumented migrants and welcoming millions more asylum seekers into the country a political nonstarter for Biden. In fact, even the president’s most modest efforts to reform migration have proven fraught.

Morning Consult surveys show that Biden’s two least popular policy moves have been raising the cap on the number of refugees admitted annually and the attempt to revoke Title 42, a pandemic-era measure that uses public health law to expel asylum seekers who would otherwise remain in the United States while their cases are adjudicated.

Both measures would only benefit legal migrants, but Alexandra Filindra, an associate professor of political science at the University of Illinois-Chicago, said any perception that a policy would lead to increased refugee arrivals from Latin America would be exploited in U.S. elections.

“White Americans are reluctant to accept the entry and especially the relocation close to them of nonwhite refugees and non-Christian refugees, especially when it involves some sort of material burden,” Filindra said. “For a long time in political science, we have known that negative outgroup attitudes, whether they relate to African Americans or Latinos or Muslims, are big predictors of opposition to inclusive immigration programs. And conversely, nativism and xenophobia are big predictors of white American support for restrictive immigration policies.”

That’s why, critics say, the Biden administration has continued the Trump-era strategy of pushing border enforcement further south, such as by asking Mexico and Guatemala to stop migrants hundreds of miles from U.S. territory and process or deport them, instead of prioritizing reform at home.

“The strategy from day one has been, ‘See what we can get Latin American countries to take off our hands,’ without giving them much to make it effective,” said David Bier, associate director of immigration studies at the Washington-based Cato Institute. “It’s not like it was under the Trump administration, where relations were totally adversarial, but the strategy has been the same the entire time, just using these countries as an extension of the U.S. Border Patrol.”

Related: The Summit of the Americas Is Happening Without Latin America’s Most Popular Major Leader

The early interdiction strategy that Bier mentioned does little to address the root causes of — or to reduce — northward migration, as the record numbers of southern border arrivals this year shows, and the factors pushing Latin Americans from their homes remain many.

Climate change has devastated farmers in Central America, decimating the harvest of key crops in Guatemala, Honduras and El Salvador — the so-called Northern Triangle, from which more than 2 million people have fled since 2014. To make matters worse, beginning in 2006, more effective drug enforcement in Mexico began moving cartel traffic into the Northern Triangle. Flush with funds from the lucrative U.S. drug market, organized crime took control over urban areas, preying upon government institutions weakened by an array of internal and external wars from the 1960s to 1990s. The gangs physically and sexually victimize civilians as young as their early teens, and sometimes harsh retributions catch innocent people in the dragnet, like El Salvador’s mass detainment of suspected criminal associates.

During last week’s summit, Vice President Kamala Harris announced nearly $3.2 billion in private investment in Central America in hopes of stabilizing the region’s economy, but experts doubt it will do much. The fact that the funds won’t be coming from taxpayer pockets makes them more palatable to the Biden administration, but also means there are no guarantees about when, where or how the money will be invested — or if it will help.

“The academic literature is quite clear that increasing GDP growth does not reduce out migration. It can increase out migration, because now all of a sudden more people have the means to migrate and you’re going to make anywhere from three to 10 times as much by moving to the United States,” Bier said. “The Biden administration knows it’s not going to work, but highlighting the poverty is a way of saying, ‘It’s not our fault that people want to come.’”

The Biden administration has long argued that while the immigration system is in need of reform, those changes will take time. A White House spokesperson said that more U.S. investment throughout the region would in the meantime help strike at the root of the problem “based on the logic that if people have jobs and economic opportunity at home, they will be less inclined to leave their home and migrate to the United States.”

But in many Central American capitals, a more cynical spirit prevails.

Karla Valenzuela, a professor of international studies at Universidad Iberoamericana in Mexico City noted that after Mexican President Andres Manuel López Obrador announced he would boycott the Summit of the Americas due to the forced exclusion of Cuba, Nicaragua and Venezuela, his counterparts in the Northern Triangle countries quickly echoed him.

“Migration is a topic that is seen as sacrificed already by Central American governments,” said Valenzuela. “We who study migration know that the measures Harris announced are not effective; what would be effective is removing Title 42 and revoking the Remain in Mexico policy to allow orderly and legal migration.”

Valenzuela added that it often seemed as if the problem was unresolvable.

“I don’t think there is a political solution,” she said, “all the governments know what must be done, but the issue is seen as lost in the end.”

The Biden administration finds itself with few good prospects.

The measures that would begin to stabilize the home countries of migrants coming to the United States and reduce inflows over the long term would include allowing many more migrants into the United States immediately — nonstarters for an electorate already souring on the president.

But Biden’s efforts so far are not likely to have much of an effect on border arrivals, meaning the Republican campaign for the upcoming November elections and in 2024 will have no shortage of images of migrant caravans.

In the end, that may lead to a situation where a failure by Biden to meaningfully address the problem helps elect a U.S. president even less interested in working with Latin American governments on resolving the deep roots of such problems, said Patricia Martuscelli, a lecturer in International Relations at the University of Sheffield in the United Kingdom.

“You need to negotiate and coordinate efforts with other countries in the region: We need to talk about development, we need to talk about how to deal with economic crises, how to deal with the violence, with the organized crime in the region,” Martuscelli said. “The risk of having a second Trump presidency is really bad for Latin America, because Trump is not a negotiator.”