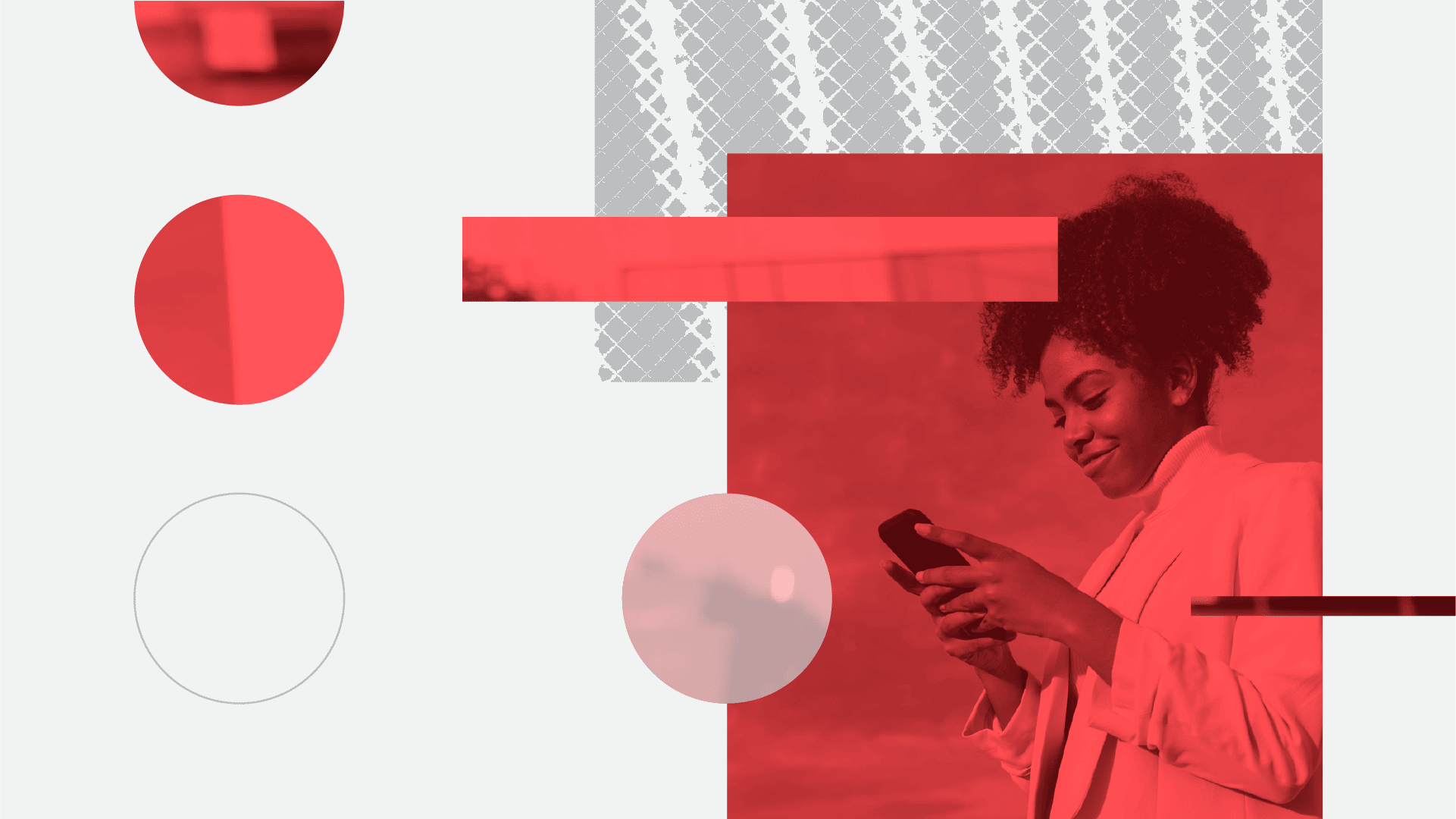 The convenience that social networks provide younger consumers when delivering news alongside other social content likely helps that cohort overlook their distrust of those platforms, but this doesn’t mean companies should stop working to boost trust.

News publishers and social media platforms have long worked to establish a symbiotic relationship, but it’s been fraught for a multitude of reasons, including backtracked payment agreements and traffic that’s seesawed in the face of unanticipated algorithm changes.

However, publishers who lean on social media to help age down their audiences should be happy to hear that younger consumers aren’t ditching social media platforms as news sources, despite the cohort’s relative lack of trust in social networks, according to recent Morning Consult research.

April data shows that 68% of Gen Z adults turn to social media for news at least once a week, which is significantly higher than the share who reported using online-only news sites (30%), their second most commonly used medium.

Gen Z adults were asked how often they turned to each of the following for news:

Social media remains the top destination for Gen Z news consumption, despite self-reported usage trending downward over recent years (84% of Gen Z adults reported turning to social media for news at least once a week in 2019). However, this is part of a broader trend of declining news consumption across channels and generations, likely due to many consumers’ waning appetite for news over a difficult couple of years.

While not all social media platforms are used equally for news, Morning Consult’s data hints at how companies aiming to reach Gen Zers with news should still broadly be prioritizing social platforms, rather than other digital channels like video streaming services, which have seen aggressive investment from certain news networks despite sometimes lackluster results.

At the same time, Gen Z trust in social media platforms is low

Social media’s popularity for news among Gen Z should come as no shock, but what’s surprising is how many of these younger consumers rely on it despite overwhelmingly finding it less trustworthy than other news media like radio, cable news networks and podcasts.

According to February research, 47% of Gen Z adults said that they don’t trust social media platforms much or at all, significantly higher than the share who said the same of any other news source, highlighting the gap between attitude and action among younger consumers. 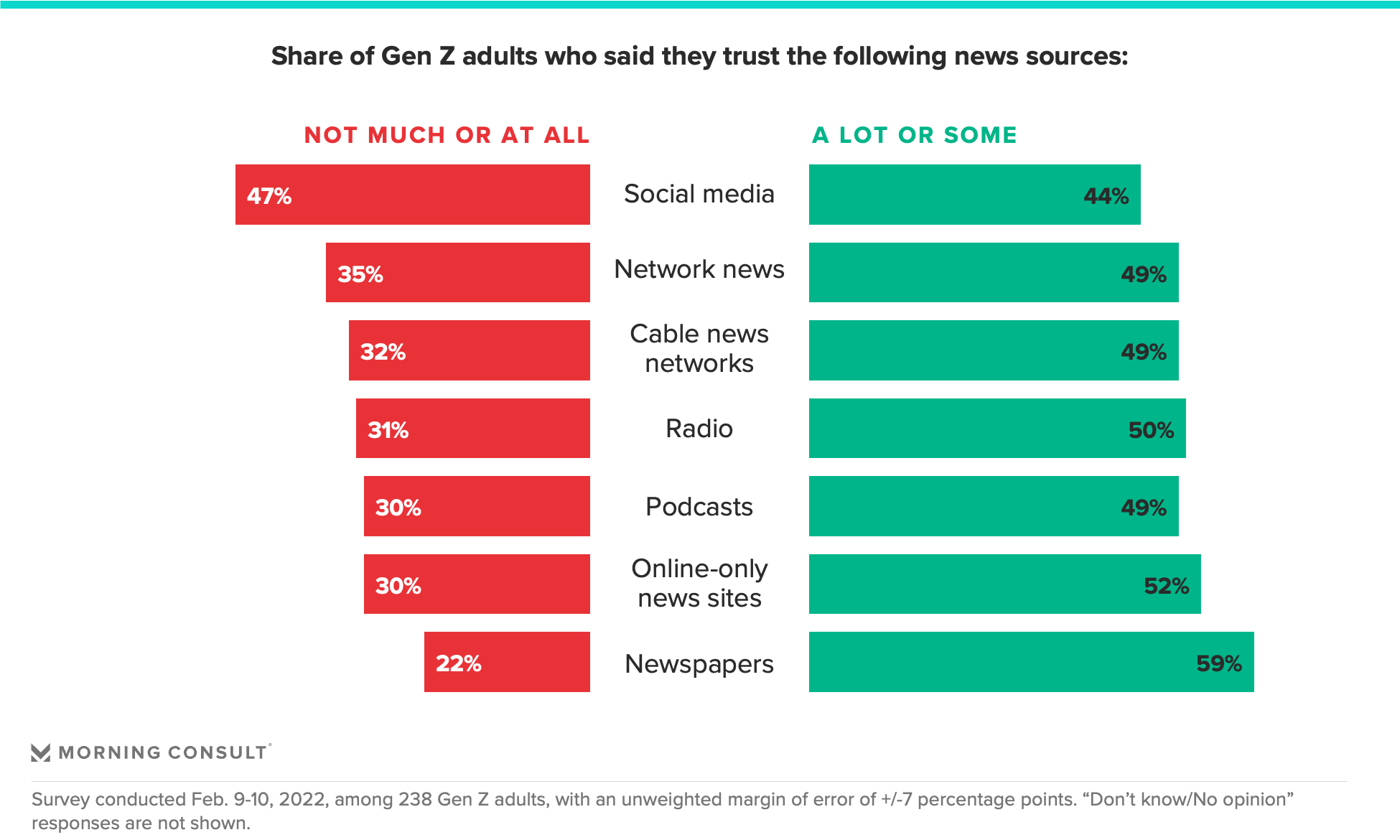 It’s also worth noting that the disparity between usage and trust is not unique to Gen Z: Social media is the most commonly used platform for news among U.S. adults (50%), while also being the least trusted (58% said they trust social media “not much” or “not at all”).

There is good news, however. Morning Consult research shows that brand trust in social media and entertainment companies is not as important as it is for other industries when it comes to purchase or usage consideration. According to our newly published Most Trusted Brands 2022 report, only 19% of U.S. adults who permanently stopped using a product or service after a brand lost their trust cited a social media company as one they will no longer use, while 16% said the same about a media and entertainment brand. Meanwhile, roughly 3 in 10 said they stopped using a product from a financial services brand and 21% said the same for a retail or e-commerce brand.

Social media platforms are likely still valued as news sources because of the ease of being able to get news in the same feeds alongside social content from influencers, celebrities or friends, and these upsides outweigh the downsides of not trusting the medium as a whole.

This doesn’t mean boosting trust is a meaningless initiative for social platforms: For one, gaining trust in the realm of news distribution among the public can potentially help the likes of Facebook and Twitter lessen scrutiny from misinformation-focused regulators, at a time when these platforms are aggressively working to correct the records about their roles in spreading fake news.

While there won’t be a one-size-fits-all strategy for building trust, further boosting credible independent voices on social media platforms via strengthened monetization options like paid newsletters — which Facebook and Twitter have both attempted — seems like one logical way forward.

Social platforms could also seek to create tools specifically aimed at making it easier for news publishers to repurpose content they’ve already featured on their own websites. For instance, Snapchat in April started rolling out a tool that automatically turned published articles of select publishers like The Washington Post and The Wall Street Journal into Stories. Minimizing the amount of effort required for news publishers to post on social platforms will increase the number of credible stories that populate Gen Z digital news sources like Snapchat.