LGBTQ+ consumers say they strongly prefer that companies boost members of the community rather than sell Pride products, according to new survey 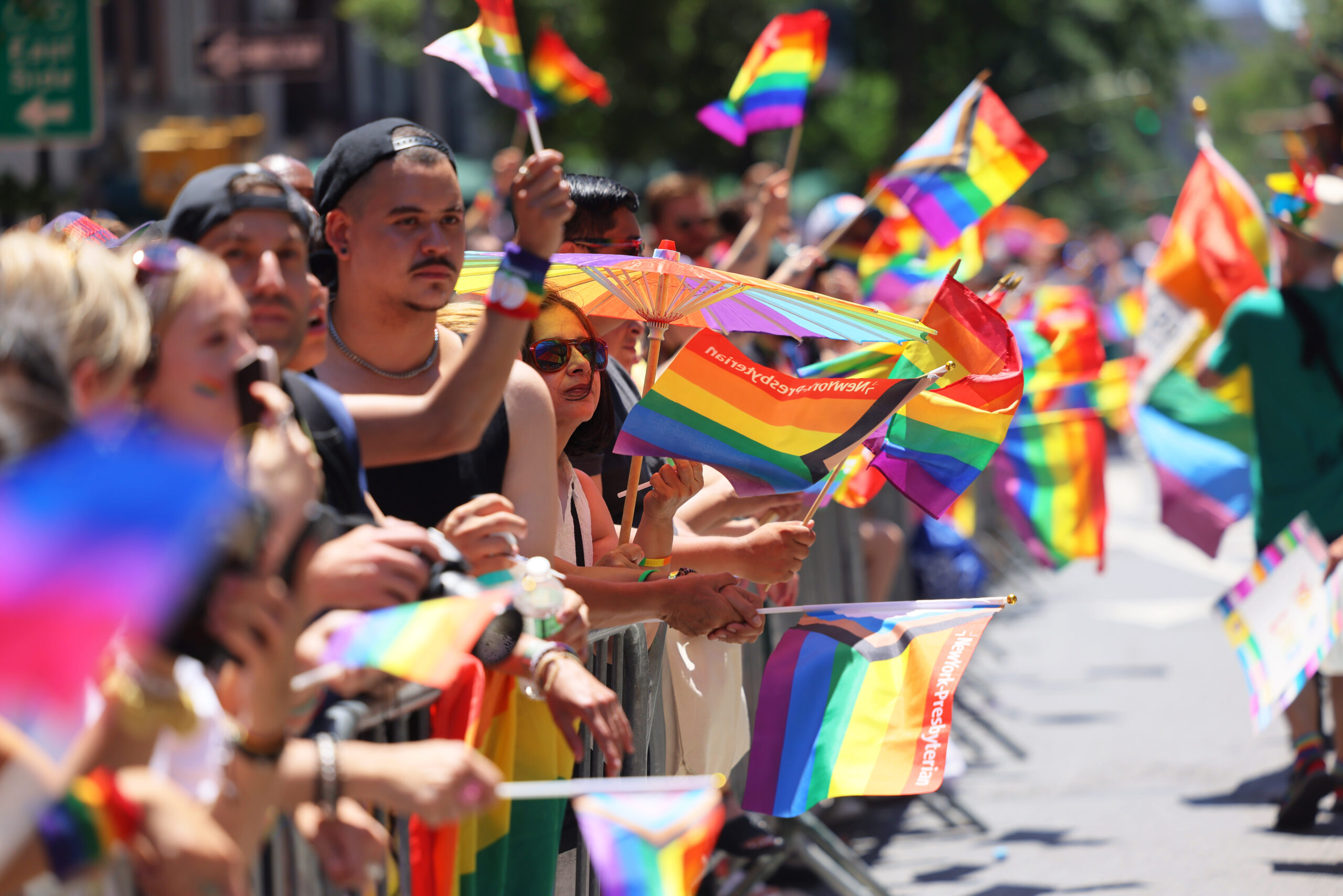 Some brands have really struggled to advertise during Pride Month. Consumers say they should incorporate LGBTQ+ voices in their marketing. (Photo by Michael M. Santiago/Getty Images)
By Eliza Carter

June is often littered with problematic marketing initiatives for Pride, the annual celebration of LGBTQ+ history and rights. This year, Postmates Inc. and Burger King Corp. were two of the most prominent offenders.

“It was really more of a stunt than targeted support,” said Wagner, vice president of client relations at Target 10. “What’s one of the bigger things in the news right now? Accusations of pedophilia and being groomers.”

Consumers are clear about what types of campaigns they’d prefer to see. For brands looking to engage with Pride without alienating potential customers, a new Morning Consult survey indicates that companies would be much better served “passing the mic,” or providing a platform for LGBTQ+ members accompanied by either subtle or even absent brand tie-ins. 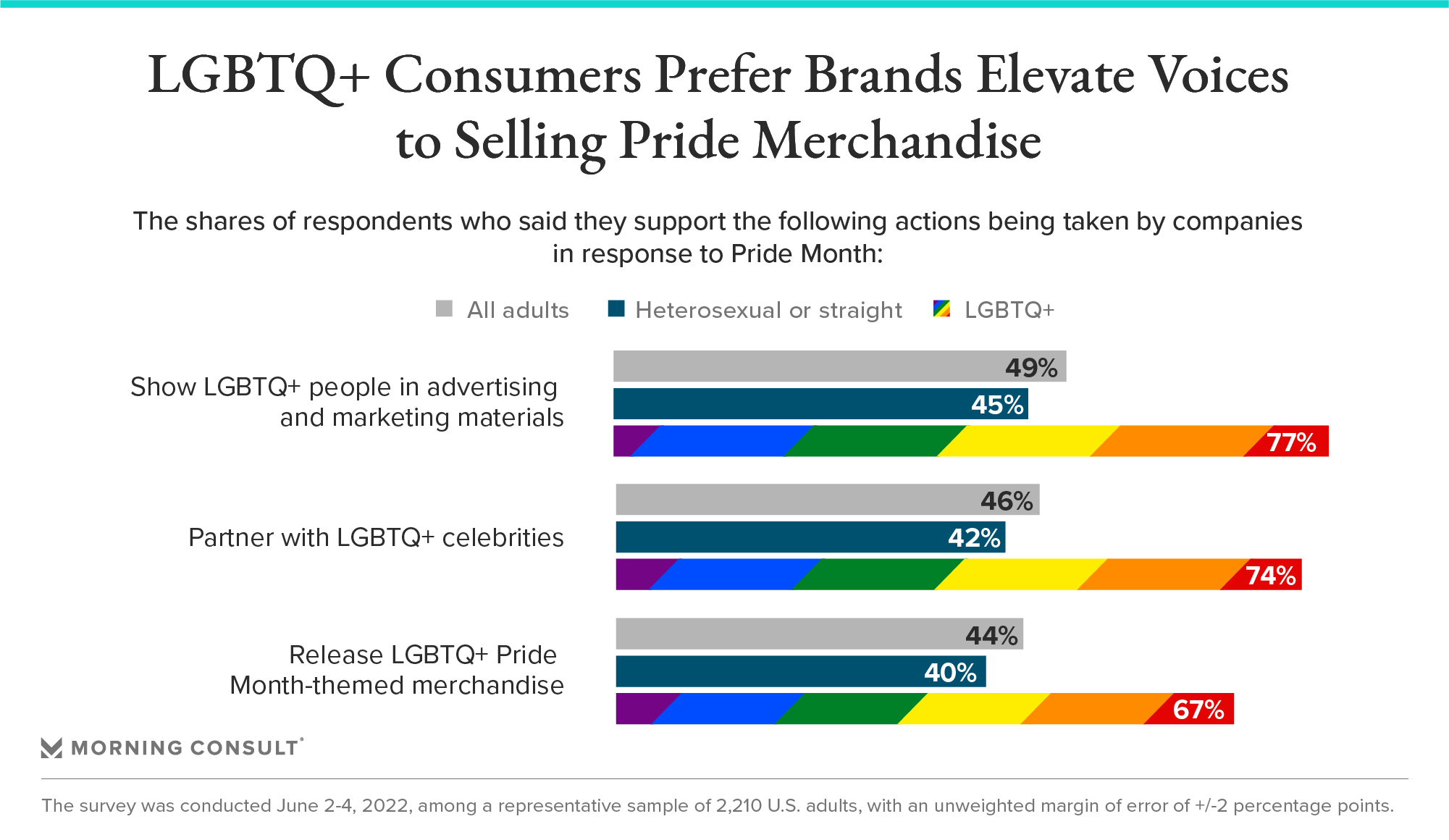 Respondents who identified as LGBTQ+ were most supportive of campaigns that show LGBTQ+ people in advertising and marketing materials, with 77% of the cohort saying they “strongly” or “somewhat” support the action. The same option was most favorable among all U.S. adults as well, as roughly half (49%) said they supported the “pass the mic” approach.

Larry Gross, a professor at USC Annenberg School of Communication, said that while brands used to be “afraid” of associating themselves with marginalized groups like the LGBTQ+ community, they now believe such associations “will improve their standing, not just among those groups, but with mainstream consumers,” he said.

Other experts said the most successful Pride marketing campaigns are part of a year-round effort. Otherwise, brands are credibly accused of “rainbow washing,” or capitalizing on a trend to sell Pride-related merchandise each June in an effort to appear supportive of LGBTQ+ communities without actually providing tangible outcomes that address the community’s concerns, noted Katherine Sender, a professor in the department of communication at Cornell University who specialized in LGBTQ+ media.

“To avoid this idea of rainbow washing, you’ve got to have a sustained approach to marketing through the whole year, partner with nonprofits to really show a commitment to the community, and challenge themselves to really think about whether they should invest in states that have particularly punitive LGBTQ legislation,” Sender said.

But even with an effective strategy, companies will still meet skepticism from some members of marginalized communities — for-profit brands face an eternal, uphill battle to convince stakeholders that they’re not just motivated by their bottom lines. Seven in 10 LGBTQ+ respondents in the Morning Consult survey said they believe that “companies don’t want to lose customers, so they release statements in support of Pride Month,” compared to just 16% who said “companies truly care about Pride Month.”

So it’s up to advertisers to find ways to break through the boilerplate. Sender pointed out an example of “passing the mic” that particularly resonated earlier this year: “The Note,” a short film from Mondelez International Inc.’s Oreo cookie brand that centers on a young Chinese-American boy and his struggle with coming out. The video, which was directed by “The Half of It” filmmaker Alice Wu, represents a more “holistic approach” to Pride marketing, Sender said. The ad only shows the Oreo logo briefly at its conclusion.

“The strategy with Postmates, I assume, is that people will send it to their friends and it will have a viral cascade,” Gross said. “It’s all about attention and edginess.”