The Young and the Resentful: Multinationals Reconsidering Their China Operations Face Geopolitical Resentment That Could Cause Lasting Reputational Damage

Foreign businesses reassessing their China investments must be conscious of the tradeoffs: Nationalistic young consumers may continue to nurse grievances long after operational crises subside 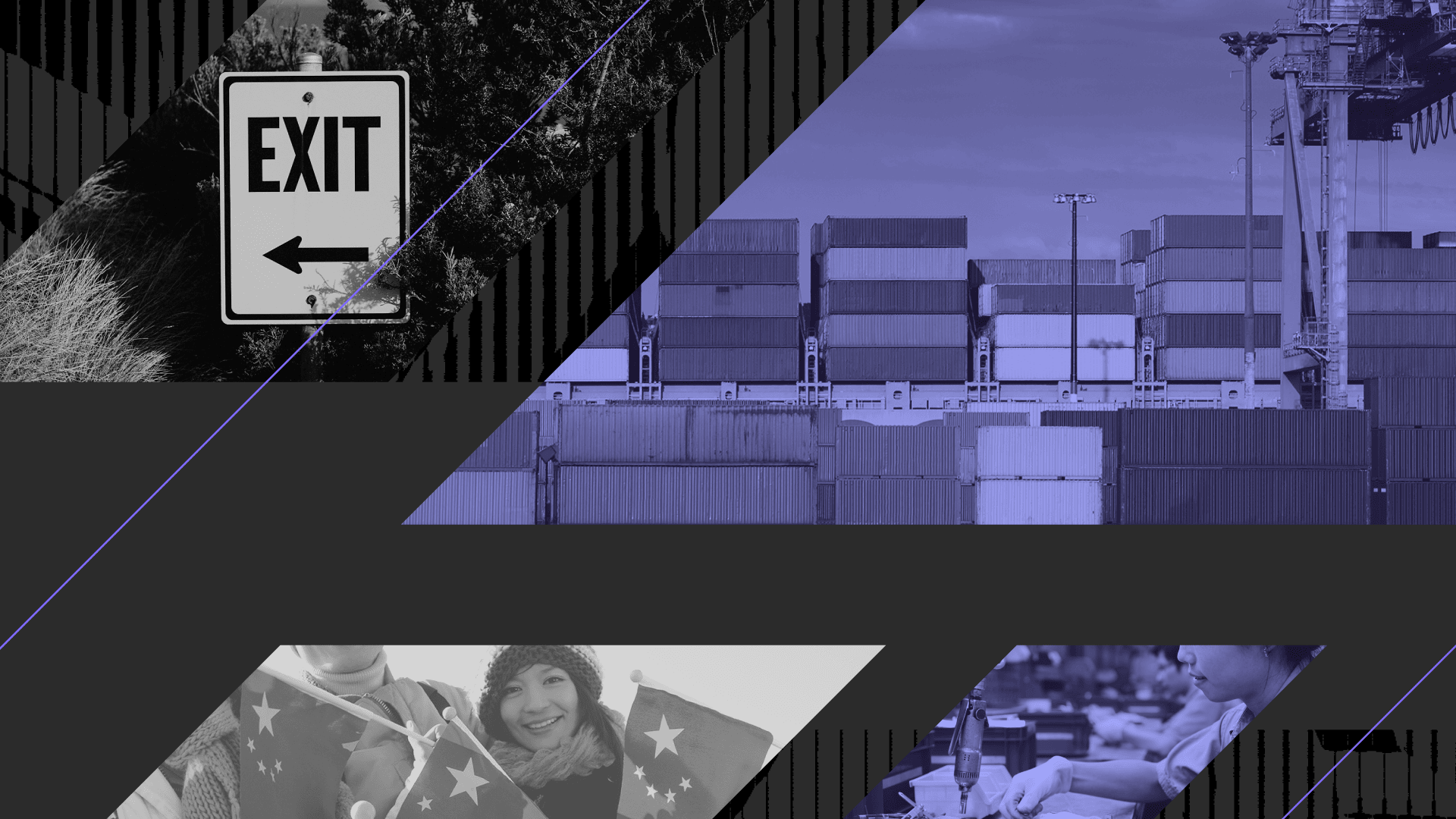 As the U.S.-China trade war drags on and Beijing’s aggressive zero-COVID policies continue to hamper supply chains and shutter factories, frustrated foreign businesses are reconsidering the scope of their operations in the country. The Biden administration’s passage of the Uyghur Forced Labor Prevention Act in June 2022 has added regulatory costs on top of public relations and ethics concerns.

Just under half of Chinese adults (47%) have been paying at least some attention to news about foreign companies scaling back their present and future operations in China or exiting the market altogether for these and other reasons. The most critical consumer groups — the young, urban and highly educated, who respectively have the largest window to buy foreign-made goods and services in the years ahead and who have historically been their most avid consumers — are paying the most attention.

Respondents were asked how much they have seen, read or heard about foreign companies’ plans to reduce operations and investments in China, including relationships with local suppliers

But there is a critical disconnect over messaging: While companies have largely cited uncertainty linked to China’s stringent zero-COVID lockdowns as the reason for restructuring their supply chains or slowing their pace of investments, Chinese consumers, including these critical subgroups, are more likely to attribute their decisions to geopolitical tensions and foreign antagonism.

As we explain below, this disconnect risks driving long-lasting resentment toward foreign companies with attendant reputational damage. Clear messaging will help but will not be a panacea.

Among Chinese adults writ large, respondents see the U.S.-China trade war as the most significant factor driving foreign businesses to reconsider their operations in the country, followed closely by “pressure from Western governments to withdraw.” Both outpace the share of respondents citing “pandemic-related lockdowns and restrictions” and “rising costs of doing business due to inflation.”

Chinese respondents were asked whether each of the following is a reason foreign companies might stop or reduce their investments and operations in China:

“Lack of respect for China” and “rising anti-China sentiment abroad” follow closely behind, suggesting that many Chinese view foreign businesses’ decisions not just through the prism of geopolitical tensions, but also as outright foreign antagonism toward China. Moreover, 45% of respondents cite lack of respect as a “major reason” motivating foreign businesses’ decisions, 8 percentage points ahead of the equivalent share citing pandemic-related lockdowns, and 15 percentage points ahead of the share citing “supply chain issues.”

Respondents are least likely to entertain reasons that cast China as responsible for foreign exits. The notion that China might be hostile to foreign businesses ranks at the very bottom of the list for Chinese adults and across all other demographic groups we examine, along with perceptions that foreign workers and executives no longer want to live in China. Respondents were similarly unconvinced that cybersecurity risks or China’s regulatory environment could pose challenges.

The tendency to attribute corporate exits to geopolitics and foreign antagonism is especially pronounced among younger respondents. Chinese adults ages 18 to 34 are the only group for whom four out of their top five reasons overall can be ascribed to these issues. This group is also more likely than any other demographic to view rising anti-China sentiment abroad as a driver of foreign business decisions: 80% view it as a major or minor reason, compared with just 51% for adults ages 35 to 44 and 69% for adults ages 45 to 64.

China’s young consumers also hold the most extreme views when it comes to perceptions of foreign antagonism specifically. More than half (54%) of adults ages 18 to 34 cite a lack of respect for China as a major reason foreign companies are hedging their bets, the largest share of any demographic. These views are notably tempered by age, falling to 36% for adults 35 to 44 and just 32% for adults 45 to 64.

Generational nationalism is the underlying cause

It is unsurprising that generational nationalism colors Chinese consumers’ views of foreign decisions to look for operational alternatives beyond China’s borders. The country’s younger generation of consumers has come of age in a wealthier, more self-confident China that, under Xi Jinping, has cultivated a strident and less accommodating approach to the rest of the world. They are even more nationalistic than previous generations and hypervigilant about other countries’ attempts to contain China or hinder its development. They may also be less in thrall to globalization and more discerning about foreign influence than older generations who came of age earlier in the era known in China as the “reform and opening-up,” which relied heavily on foreign investment to grow the economy and jump-start Chinese consumption.

As younger Chinese age and displace older consumers in the market, their heightened sense of geopolitical grievances may drive long-lasting resentment toward foreign businesses, which should take special heed of this group’s comparative extremity and their clout as consumers.

Urban and college-educated Chinese are also worth watching

Education and urbanization have a moderating effect on views related to foreign antagonism, but companies courting the urban and highly educated should still be wary. While these groups are less likely to cite a lack of respect for China as a major reason why foreign businesses are scaling back or otherwise reconsidering their operations in China, 74% and 75% respectively still view it as either a major or minor reason.

As an added cautionary note, both groups are also paying at least as much attention to foreign businesses’ operations as young adults (ages 18 to 34) are, with college-educated respondents paying substantially more attention. This heightened awareness may potentially offset the slightly lower shares (relative to the 18-to-34 cohort) who attribute foreign companies’ exit decisions to geopolitical tensions and foreign antagonism.

Clear messaging around companies’ withdrawal rationales is imperative, but it will not fully eliminate reputational risks

Companies looking to shift some but not all of their operations out of China due to pandemic-induced uncertainty — whether factories, retail stores or import-export operations — should be especially cognizant of how these moves might jeopardize their relationships with Chinese suppliers, joint venture business partners and consumers going forward. For companies that view China as an important long-term market, the risk that consumer resentment outlives immediate operational frustrations will be especially acute. To preserve their reputation, companies should carefully explain their reasoning to Chinese consumers and ensure that any related marketing campaigns target the young, urban and educated.

Shifting the perceptions of Chinese youth in particular away from geopolitics will not be easy: As described above, they have grown up in a more competitive and more assertive China that is less reliant on foreign goods, and they have fewer memories of privation. For these reasons, they will likely be less forgiving of foreign companies than previous generations.

Multinationals with no immediate plans to alter their Chinese operations are not risk-free either. To avoid potential blowback from generalized indignation directed at foreign businesses over the issue, they should aggressively emphasize their decisions to stay put in public messaging to Chinese consumers.

Lastly, non-U.S. firms operating in China would also be wise to pay close attention to their brand identity as they consider scaling back operations. Even if the United States has been the primary target of Chinese geopolitical ire as of late, Chinese consumers associate the U.S.-China trade war with withdrawals by foreign companies of all stripes (not just American ones), and grievances related to foreign antagonism are even more likely to remain indiscriminate.