As SEC Closes In on ESG Rules for Funds, the Bulk of Frequent Investors Say They Value Such Standards

Frequent investors are more likely than the general public to recognize importance of ESG ratings, though there’s widespread recognition that gauging the quality of environmental claims is difficult 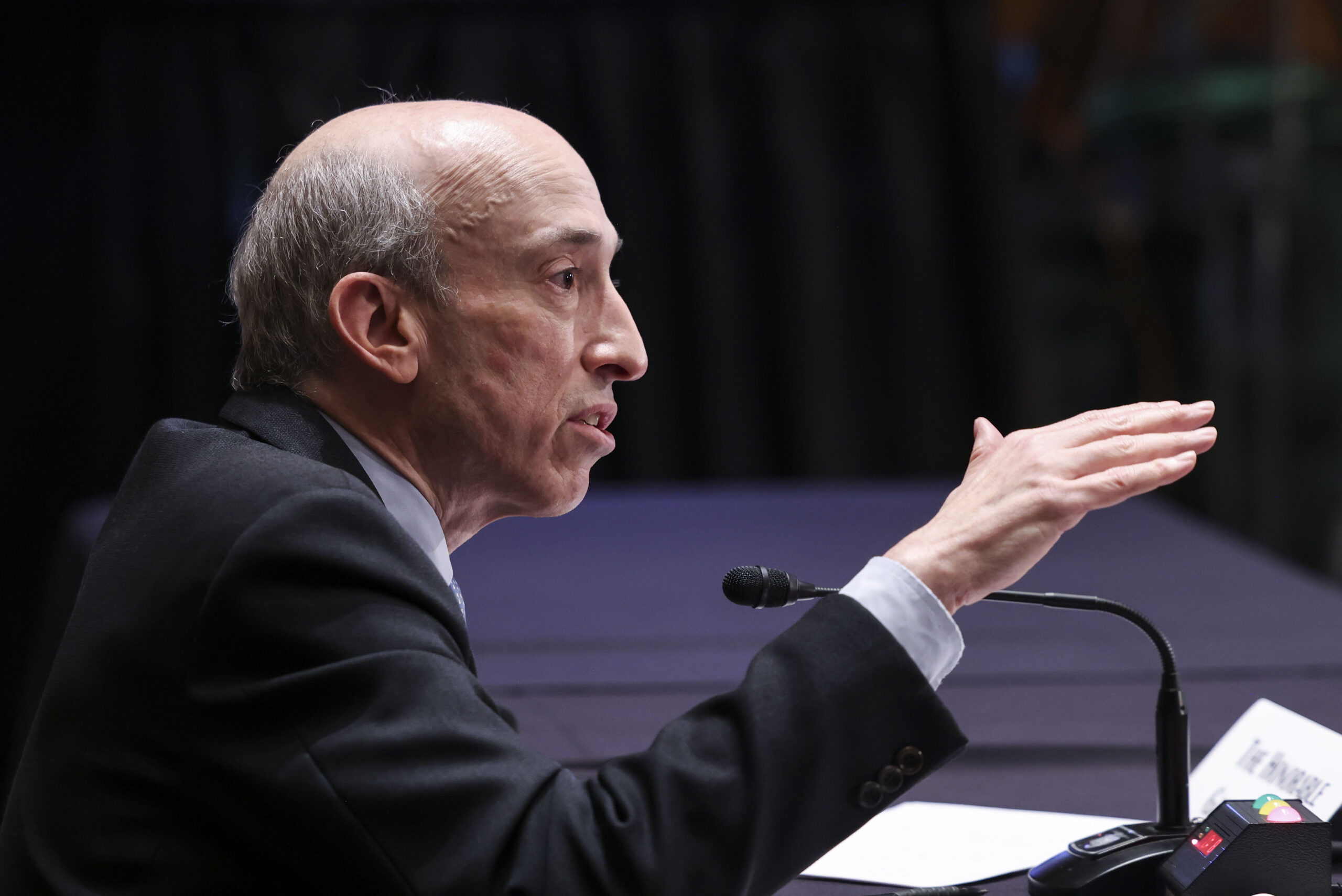 Securities and Exchange Commission Chair Gary Gensler testifies at a Senate Banking Committee oversight hearing on Sept. 14, 2021, in Washington, D.C. A Morning Consult survey found that about 3 in 5 frequent investors have seen, read or heard at least something about the SEC’s proposed rules requiring ESG disclosures from companies. (Evelyn Hockstein-Pool/Getty Images)
By Amanda Jacobson Snyder

In less than a month, the public comment period on the Securities and Exchange Commission’s proposals tied to environmental, social and governance investments will come to an end, bringing the agency closer to the finish line on rules that a leading investor trade group and a  Republican SEC commissioner have railed against.

The proposed rules would dictate how fund managers can market products that claim to meet ESG standards and boost disclosure requirements for those funds — moves that come after one estimate found that $70 billion was invested into “sustainable” funds last year.

While frequent investors still value profitability over socially conscious concerns, they are also more likely than the general public to recognize the importance of ESG standards in investments, a Morning Consult survey found. 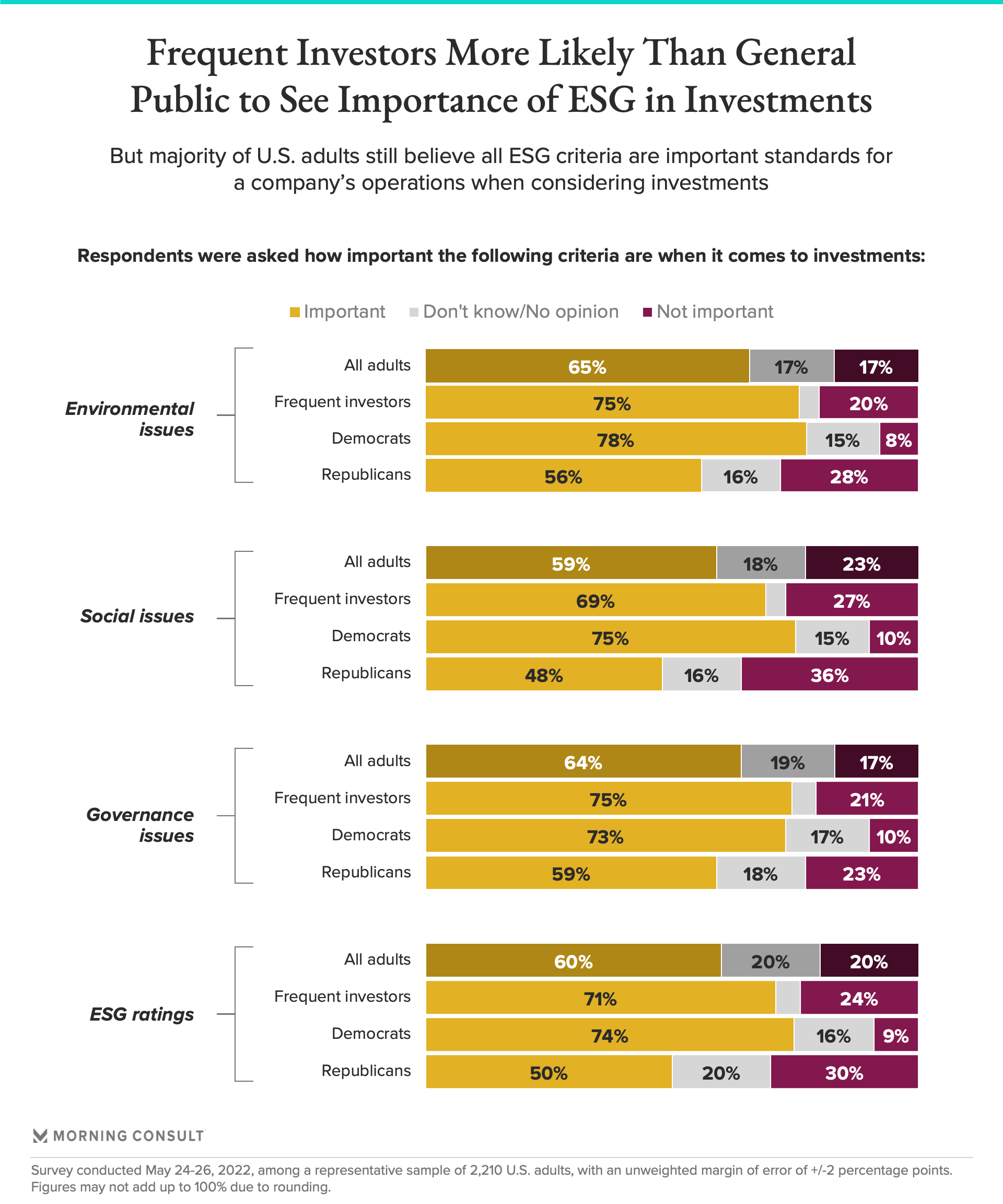 In all cases, frequent investors were at least 10 percentage points more likely than all U.S. adults to say those criteria were important when it comes to investments.

Chris Fidler, senior director of product management at the global investment nonprofit CFA Institute, said fund managers currently don’t do a “full job” of disclosing how ESG components are incorporated into products. With that in mind, the new rules would be welcome: “If you’re an analyst, and you have better access” to data, he said, “you can make better decisions.”

The potential for manipulating investors with ESG claims has fueled the regulatory push on this front. SEC Chair Gary Gensler has expressed concerns that funds and companies, in an effort to entice ESG-hungry investors, are “greenwashing” their offerings — which may come at premium prices — and additional transparency and protection from such claims are needed.

The Wall Street Journal last year reported on the mixed results in stock performance of 500 ESG-ranked companies, noting disparities in the rankings from the three major data providers on ESG criteria. Companies used different rating agencies that in turn used different data sources, procedures and methodologies, the analysis found, creating an issue that will likely take years to untangle.

The general public and frequent investors are in agreement on the challenges in assessing environmental claims specifically. According to the Morning Consult survey, strong majorities from both groups said they agree it is hard to prove whether a company is environmentally friendly if it claims to be.

The issue transcends typical partisan divides, as well, with roughly 7 in 10 Democrats, independents and Republicans all saying it’s hard to assess a company’s environmental claims.

The SEC in March aimed to address that challenge with a proposal that would require public companies to collect and disclose information on their direct greenhouse gas emissions, including data on their own climate impacts and impacts from the energy they purchased. That proposal has faced heavy pushback from big companies and Republicans.

In a letter to the SEC, the climate nonprofit Ceres said the significant financial risk climate change poses is “surely clear and unmistakable,” and therefore “it is likewise reasonable for the Commission to conclude that this risk is, or can be, material to investors. This is not a matter of conjecture; investors have repeatedly and emphatically expressed this view.”

In its comment letter to the SEC, the Investment Company Institute, an advocacy association for fund managers, expressed support for many elements of the agency’s company climate risk disclosure rules and argued in favor of a requirement for companies to follow the “materiality standard” in disclosing climate impacts. But the ICI, which balked at parts of the agency’s disclosure rules for fund managers, also wrote that the SEC should not require companies to report the actual emissions along supply chains and associated with a company’s products and services, known as “Scope 3” emissions.

The materiality clause shines a light on what Tinglong Dai, a professor at Johns Hopkins University’s Carey Business School who specializes in global supply chains, has called a “blind spot” in ESG investing: the complexity that comes from trying to understand climate risks that take place outside a company’s walls, and reporting on those in a unified way.

Dai pointed to research showing that companies which selectively disclose supply chain risks see better returns, but he pointed to industrywide initiatives to standardize reporting as a good way for companies to establish credibility with their metrics.

The comments from Ceres and ICI echo a broader desire for some investors and fund managers to have access to more ESG-related data, even if it’s currently flawed. “No metrics are perfect, and ESG isn’t bad in comparison to other metrics,” Dai said. “It’s not perfect but it is necessary.”

Most adults are unaware of upcoming ESG rules, but the topic has been a mainstay in the media

If the recent news cycle is any indication, angst over ESG will likely persist in the months ahead. Tesla Inc. Chief Executive Elon Musk has done his part to keep attention on the topic, tweeting in May that “ESG is a scam” after Tesla was removed from the S&P 500 ESG Index due to a “lack of a low-carbon strategy” and other issues. In June, Goldman Sachs Group Inc. reportedly attracted the SEC’s scrutiny over the quality of its disclosures related to ESG products, and just weeks earlier, the chief of DWS resigned after the Deutsche Bank subsidiary’s offices were raided by German authorities in an investigation of ESG product claims.

Still, most Americans aren’t clued in on the SEC’s ESG efforts. Nearly half of U.S. adults said they have heard “nothing at all” about the agency’s proposed rules for companies, and a quarter said they haven’t heard much. The SEC did not respond to a request for comment. 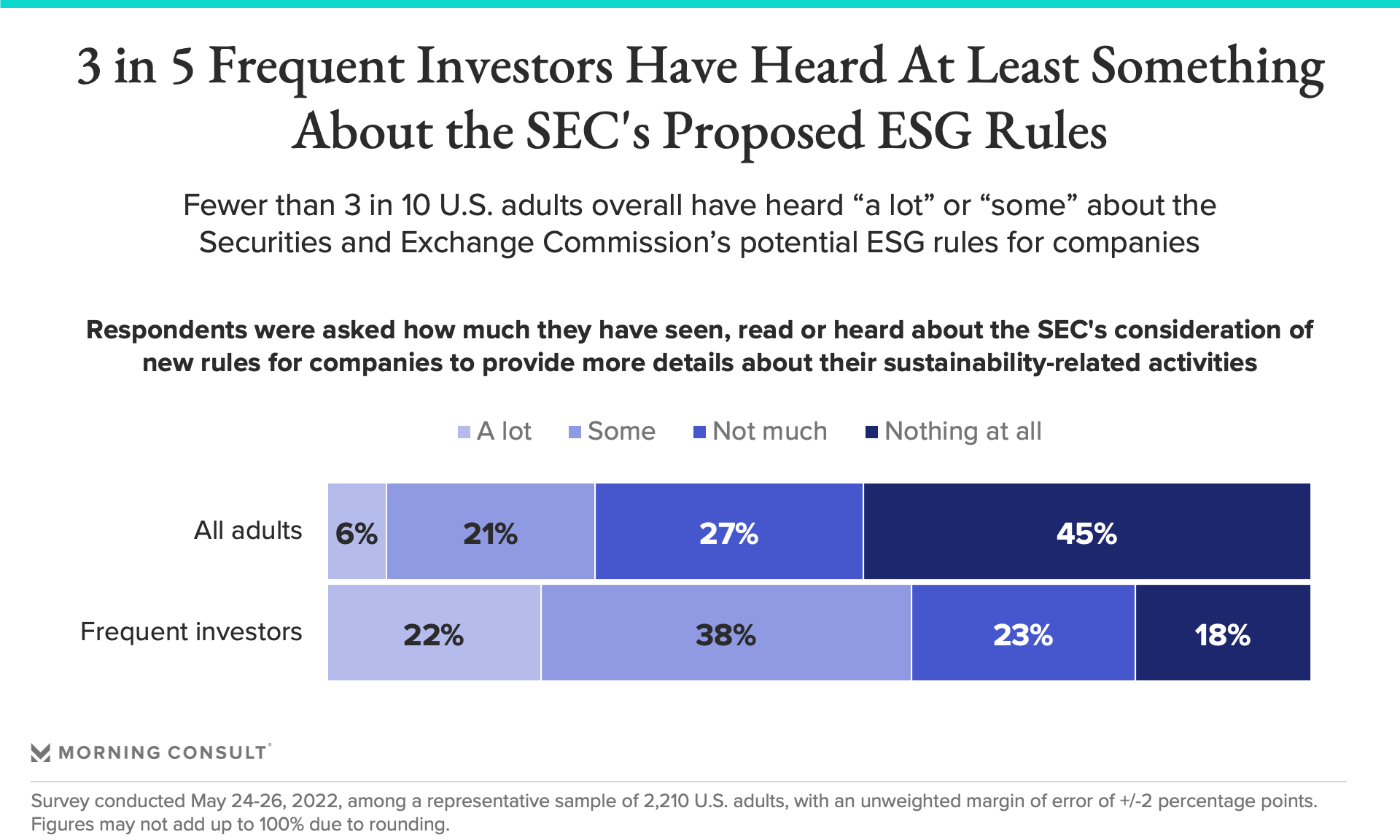 But frequent investors are much more engaged: 3 in 5 said they have seen, read or heard at least something about the rules that require companies to provide more details about their sustainability-related activities.

Increased public awareness, research and scrutiny will ultimately be crucial in keeping the investment industry in check, Dai said, as greater transparency will push funds to work through a lack of clarity in ESG claims. He said he was almost happy to see Musk’s derogatory tweet about ESG, since it meant greater attention to the issue.

“The way to address complexity is to help them improve it gradually,” he said. “For ESG to grow in a healthy way, it needs enemies — it’s a good thing.”