Why Video Streaming’s Impact on Theater Attendance Is Overblown

Movies watched on streaming are not always taking the place of movies watched in theaters, writes media and entertainment analyst Kevin Tran 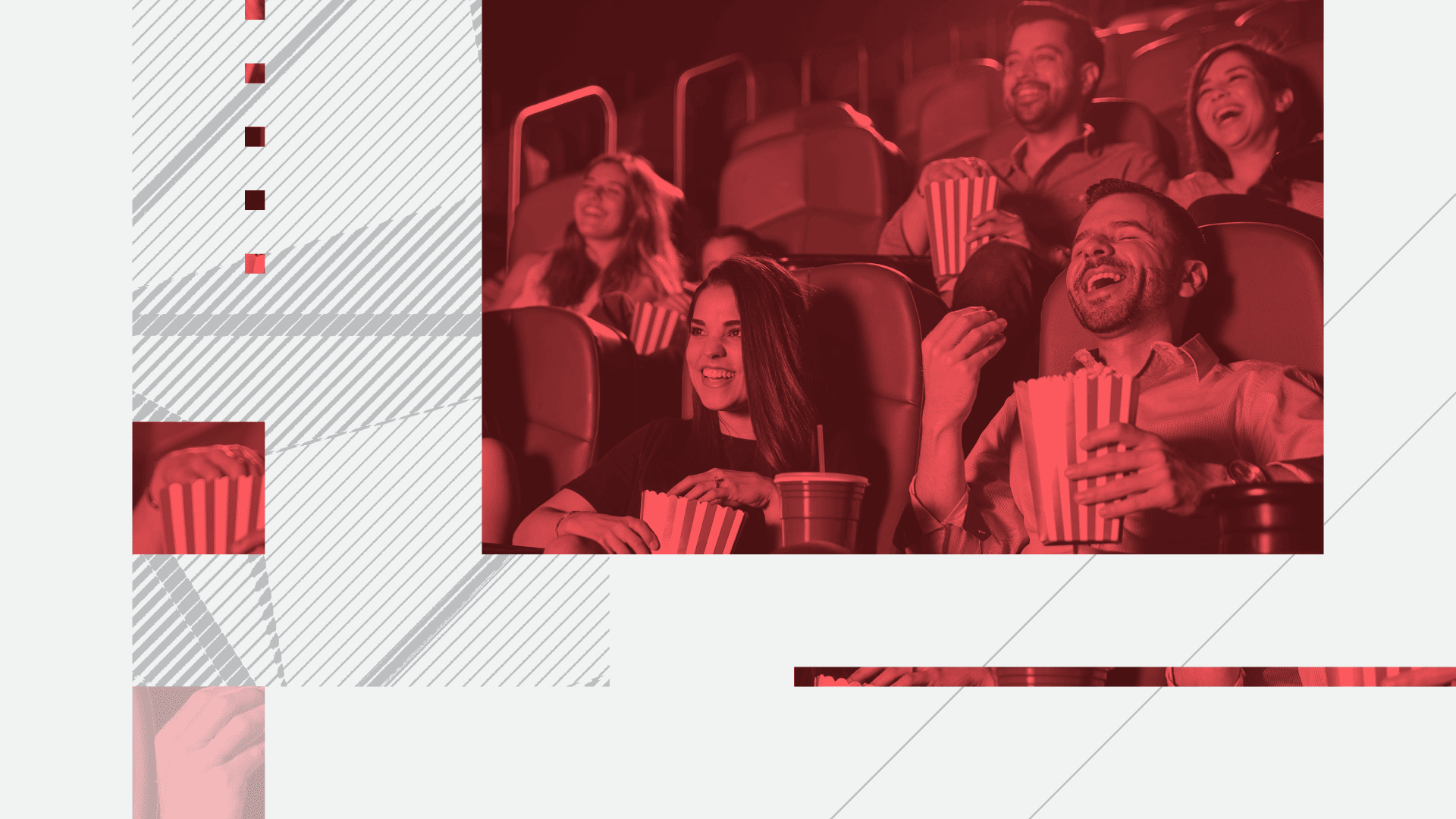 Despite the flood of high-quality, at-home film viewing options that followed the COVID-19 outbreak, heavy video streaming users still counterintuitively tend to also be heavy moviegoers — hinting at how studios need to cultivate a symbiotic relationship with streamers that goes beyond the now largely defunct day-and-date release strategy.

As the quality and quantity of movies distributed by video streaming services have increased, so has the anxiety in Hollywood about the future of moviegoing — particularly among theater owners. The pandemic’s unprecedented number of blockbuster day-and-date debuts like “Black Widow” and “Dune” only intensified these worries.

Fortunately for the industry, box office revenue per quarter has increased considerably since late 2020, with general agreement that day-and-date releases are largely a thing of the past.

But film studios shouldn’t be so quick to shun video streaming services as a distribution channel: New data from Morning Consult shows a surprising number of consumers aren’t letting at-home film viewing eat into their trips to the movie theater.

Despite onslaught of streaming options, moviegoing interest has shown resilience

As of late June, roughly 3 in 10 respondents who made a premium video-on-demand transaction in the past month said they went to a movie theater at least once a week during that time period, a share far higher than among all U.S. adults and eclipsing that of consumers with access to any number of video streaming services. Morning Consult defines PVOD usage as paying a one-time fee of around $20 for at-home access to a movie still playing in theaters. 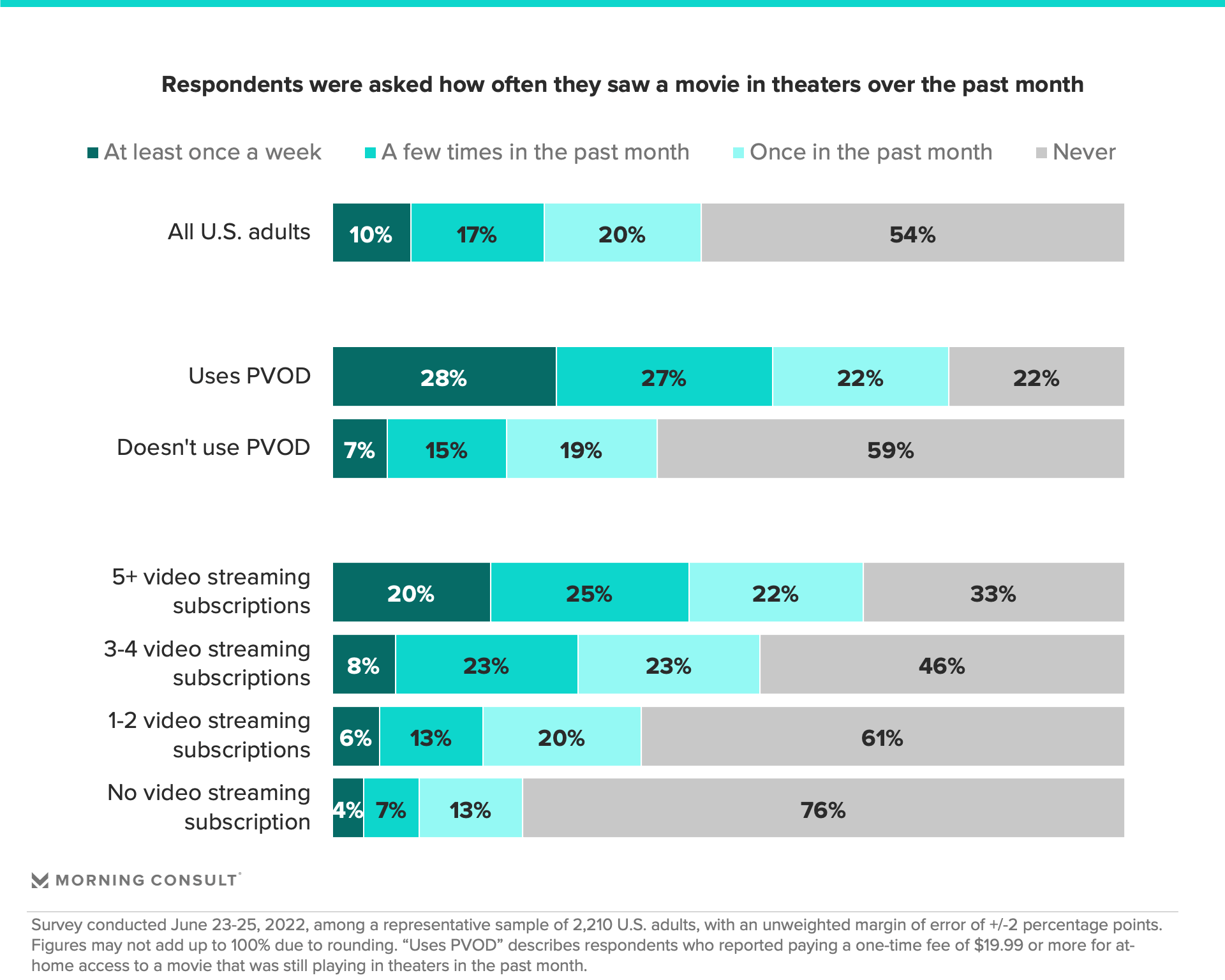 Regular PVOD transactions are expected from the most avid film fans, so if that cohort truly considered at-home viewing to be an adequate substitute for moviegoing, those who made a PVOD transaction should be going to the theater less frequently than the average U.S. consumer.

It’s true that a film’s lifetime box office revenue will be limited by going day-and-date, since many are less incentivized to see a title in theaters if they can do so at home for a lower cost. But our data paints an alternate, more nuanced picture — that frequency of movie theater attendance among video streaming users would be lower than that of those who don’t use video streaming services if the availability of films at home (like big day-and-date movies) significantly ate away at overall interest in moviegoing. In other words, seeing a blockbuster film like “Dune” at home during its theatrical run doesn’t necessarily result in one less ticket purchased at the cinema; a filmgoer may still go to the theater, they’ll just watch something other than “Dune.”

All this suggests that studios don’t need to worry about high-budget, streaming-only movies debuting around the same time as their high-profile, theatrical-only ones and cannibalizing the audience of the latter. Our research also pushes back on any temptations studios may have to regularly withhold meaningful film content from video streaming services.

How film studios can capitalize on the video streamer-cinema dynamic

Media conglomerates can maintain brand awareness among their SVOD subs by heavily promoting upcoming theatrical releases on their streaming services. For example, this should be something Warner Bros. Discovery leans into with HBO Max’s ad-supported tier in the years to come, to capitalize on the expanded user base it will have thanks to merging with Discovery+.

Another potential route is creating and releasing TV spin-offs of certain blockbuster movie franchises on video streaming services, like Disney+ is doing with its steady dribble of Marvel TV series like “WandaVision” and “Hawkeye,” which tie into its string of blockbuster theater-first Marvel movies. Consumers are incentivized to regularly pay for both Disney+ subscription fees and Marvel movie tickets if they want to stay current on the Marvel Cinematic Universe. Disney executives laid out this vision to have the plots of certain Disney+ originals commingle with theatrical releases in September 2019, but other media conglomerates have yet to replicate that strategy to any significant degree.

Unfortunately for everyone else, duplicating the success of  the Marvel franchise — with its endless opportunities for content mining — is easier said than done. But studios like Warner Bros. and NBCUniversal have no shortage of historic IP to toy with and try spinning off for TV originals. And with growth in the domestic video streaming market now as difficult to come by as it’s ever been, there’s been no better time to up the ante with this type of gamble.