South Korean Leader’s Plummeting Approval Illustrates Challenge of Closer Ties With Japan. It Might Not Be Possible Without U.S. Help 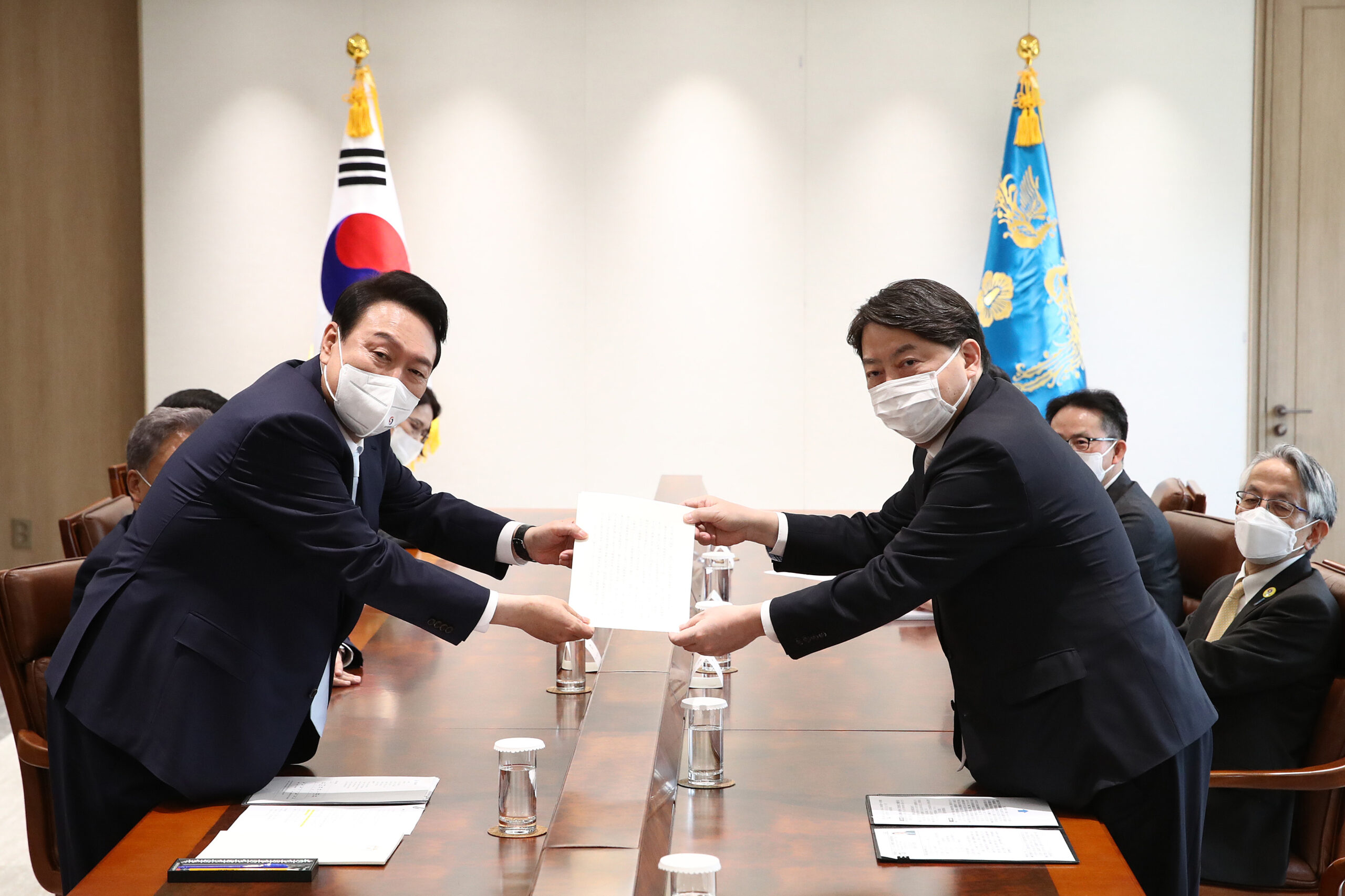 Deep historical grievances between Seoul and Tokyo led to almost immediate domestic blowback to South Korean President Yoon Suk-yeol, with new survey data showing the relatively new leader’s popularity foundering amid efforts to improve ties with Japan and the United States rather than continue his predecessor’s dovish approach to China. Experts say Washington may yet hold the key to keeping its two biggest Asian allies on the same wavelength.

Yoon and Japanese Prime Minister Fumio Kishida made history as the first Asian leaders to attend a NATO summit last month. The two leaders sat for a trilateral meeting with U.S. President Joe Biden during the conference, but for all the talk of strengthening ties the mood was cold: The pair did not shake hands and stared across a table at each other with stony expressions.

John Lee, who hosts The Weekly Korean Foreigner podcast and is a contributor to the Korea Pro news website, said Japan’s domestic politics contributed to the careful stage management of the meeting, with Kishida wary of being seen as too cozy with the new South Korean leader.

“Yoon really wanted to have a bilateral meeting with Kishida but it was just not going to happen because Kishida had elections to look forward to at the time,” Lee said. “The hard-liners within his Liberal Democratic Party were going to eat him for lunch if he met alone with Yoon during that summit and so they all agreed to have Biden involved, because with the U.S. involved, they didn’t have to talk about the nitty gritty of historical issues that both nations are really upset over.”

Kishida’s hesitation showed the difficulty of fostering tighter links between the two countries, even when one side emphatically seeks a more cordial relationship, said Doug Bandow, senior fellow specializing in foreign policy at the Cato Institute.

“The only change that has really occurred is in Seoul — that President Yoon is more willing to find a solution to disputes with Japan,” Bandow said. “I don’t see any change in Tokyo that moves dramatically away from former prime ministers Abe or Suga’s positions. It’s good that they met, but we didn’t get anything out of that meeting to suggest a clear next step.”

Kishida may be wise to make discretion the better part of valor.

Morning Consult’s global survey tracking shows Yoon’s approval rating in South Korea fell 11 percentage points since just before the June 28-30 summit — to a painful 28%. Kishida, on the other hand, experienced a 3-point bump to 43%. (The July 8 assassination of Kishida’s predecessor and mentor, Shinzo Abe, likely contributed to the small increase.) 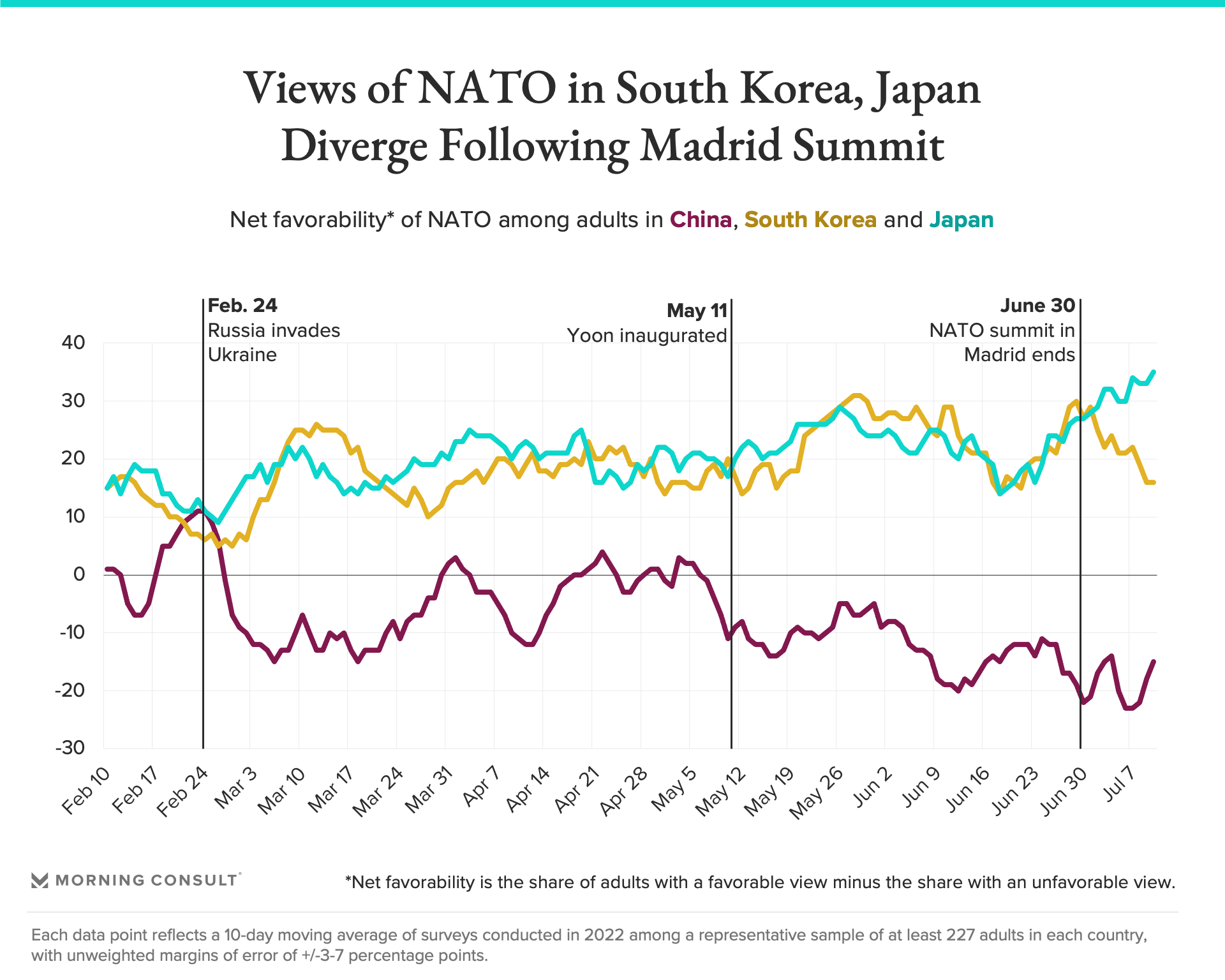 And despite NATO’s inclusion of China in its official strategic planning for the first time, South Korean opinion of the military alliance dimmed, with favorable views falling from 46% to 36%, even as Japanese opinion of the Western security pact went the other way.

“South Korea and Japan are converging on China as a threat, but they really diverge on the approach,” said Sheryn Lee, a senior lecturer at the Swedish Defence University in Stockholm, explaining that South Koreans and Japanese differ in their intuitions about the China threat.

“The idea that NATO could be something that South Korea and Japan come together with against China would be a step too far for most of the South Korean public, who might ask ‘what is this going to mean in terms of U.S. troops in South Korea? Is it going to aggravate China more?’” Lee said. “But Japan is quite different. It’s all in with the U.S., no matter whether that means NATO, the Five Eyes, the ‘Quad’ or the bilateral alliance.”

A painful history of relations, numbed only by a shared ally

But it’s too early to write off the Madrid meeting as a waste of time or effort, according to Darie Draudt, a postdoctoral fellow at the George Washington University Institute for Korean Studies, who praised the unconventional choice of forum and venue.

“Having a meeting outside Asia provides some wiggle room for progress; if you meet in Seoul or Tokyo, there is a certain set of things that you need to talk about,” Draudt said. “Whereas if you’re sitting in Spain, at a NATO meeting, there is a very specific remit that’s distinct from the historical grievances between Korea and Japan.”

Historical grievances between the countries abound.

Japan’s mid-19th century program of modernization and desire to strengthen its position against Western powers led it to increasingly encroach on Korean sovereignty from 1876. Political interference including coups and assassinations eventually led to the Japanese invasions of Korea in 1894 and 1904, its occupation of the peninsula in 1905 and annexation in 1910.

For the next 35 years, Japanese occupiers systematically repressed Korean culture and language and forced Koreans to work in its war machine during World War II. Perhaps most painfully, Japanese authorities forced thousands of Korean women and girls into sexual slavery in service of their armed forces, euphemistically labelling them “comfort women.”

A handful of survivors still live in South Korea today.

Yoon is far from the country’s first to try to move past its painful history of relations with Japan. In fact, when military dictator Park Chung-hee seized power in Seoul in 1961, part of his successful efforts to normalize relations with Tokyo included major financial indemnities for Japan’s colonization of the country.

That’s opened its own can of worms for relations between the countries.

“From the Japanese perspective, they paid their reparations, basically, for the comfort women and other grievances related to the colonial experience,” said Draudt. “But Park Chung-hee took that money and used it largely for infrastructure development. Many South Koreans today feel like that money didn’t go where it deserves, to the individual people who suffered.” 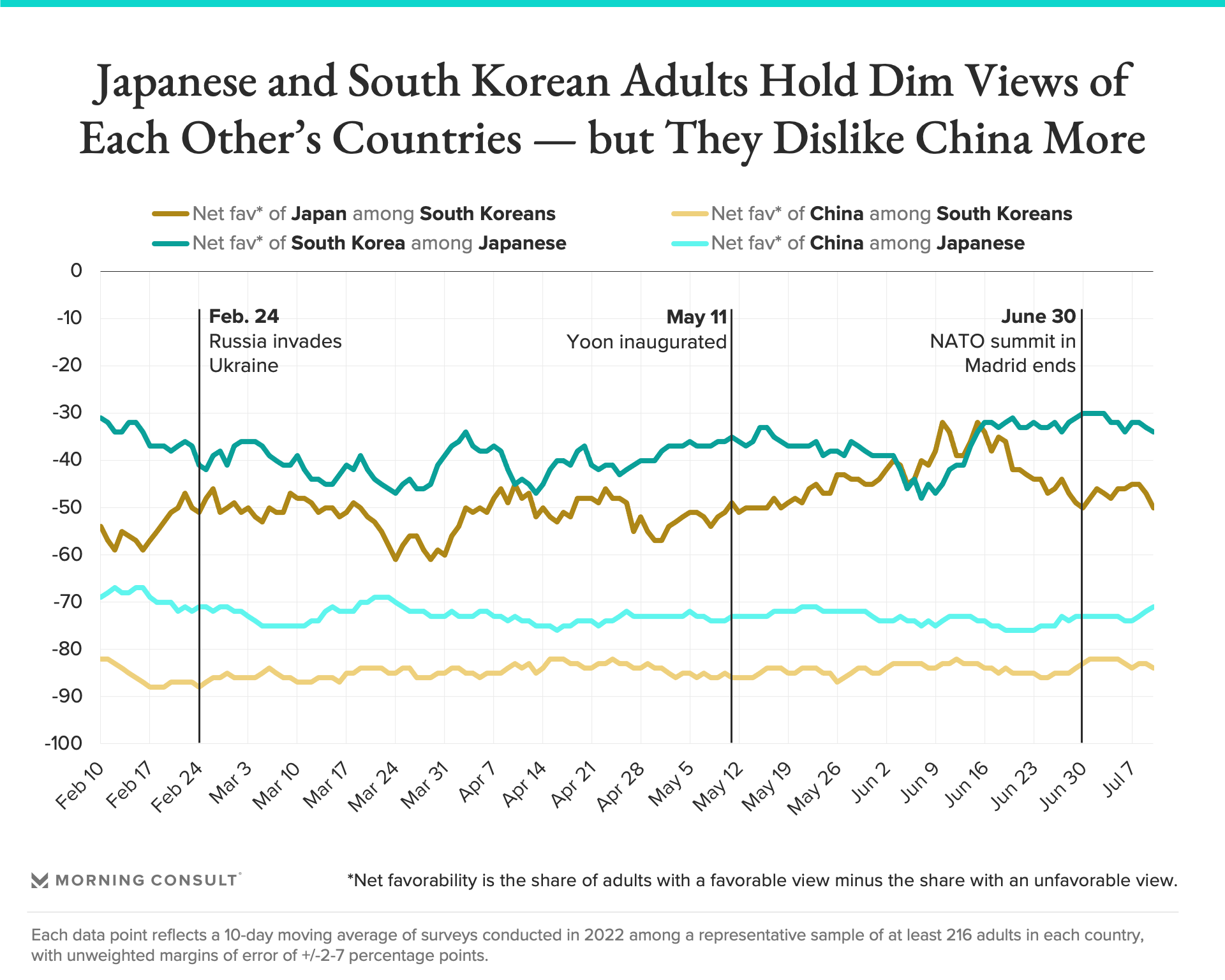 The mutual resentment is clear in Morning Consult survey data, with adults in each country markedly more likely to view the other negatively than positively. But that pales in comparison to their views of China: Close to 9 in 10 South Koreans and 8 in 10 Japanese hold Beijing in disfavor.

“The data shows the extraordinary stupidity and arrogance of Chinese foreign policy, and that’s good news for America: ‘Wolf warrior’ diplomacy is a catastrophe, and their sanctions on South Korea turned them from a country that many South Koreans liked better than America to one where the disfavorability figures are really quite extraordinary,” said Cato’s Bandow.

Bandow said the task ahead of Yoon was “to make the case to South Koreans that not only is China unlikable, but there is a threat that comes from China.”

“If he links that threat to North Korea, then he’s in a much better position to sell reconciliation with Japan at home — but I think the Japanese have got to give something; at the very least, a really believable apology for the comfort women and forced labor,” he said.

China policy has been one of the rare areas of bipartisan agreement in the United States under Biden, with legislators and voters of all stripes happy to see a tougher line than past Democratic administrations have taken, lending the White House a freer hand to bring South Korea and Japan together.

But in Tokyo, the landslide legislative victory for Kishida’s Liberal Democratic Party just days after the shocking assassination of its longtime leader opens a complex scenario for the trilateral relationship.

The LDP now controls enough seats to begin amending Japan’s constitution, which was written to strenuously limit Japanese rearmament and expansionist policy in the aftermath of World War II. On the surface, increased Japanese military capacity would seem like a decided advantage for U.S. interests, but the political reality isn’t so straightforward.

“If Japan actually does increase its defense budget to 2% of its annual GDP, that amounts to about $104 billion per year. It would be the third-highest defense budget in the world, and in that regard, the U.S. would love it,” said John Lee. “For South Korea, of course, Japan having revised its constitution to no longer be a pacifist nation with that massive of a defense budget, that’s our nightmare scenario. Korea and Japan have territorial disputes as well, it’s not just about history.”

But those concerns aren’t necessarily resonating on the other side of the Korea Strait.

“From a Japanese point of view, their feeling is, ‘What are the South Koreans are afraid of?’ Military modernization is not targeted toward South Korea,” said the Swedish Defence University’s Sheryn Lee. “It’s targeted towards a contingency with North Korea or Taiwan or China, and to also increase their share of the burden with the U.S. alliance.”

One thing the United States could do to help work around those fears is better explain its domestic political situation, said Bandow, noting increasing political polarization and estimates that show that national debt could hit 200% of GDP in 2050 no matter which party is in power.

“Ultimately, other countries in both Asia and Europe need to be thinking about a world in which the U.S. doesn’t defend them,” he said. “Where do the politics go by 2050? My reaction is that it’s not going to be toward ‘help the Europeans, help the South Koreans, help the Japanese.’ It’s going to be, ‘Let’s fix our own problems.’ And these countries have got to prepare now, otherwise they’re going to fund themselves up a creek.”