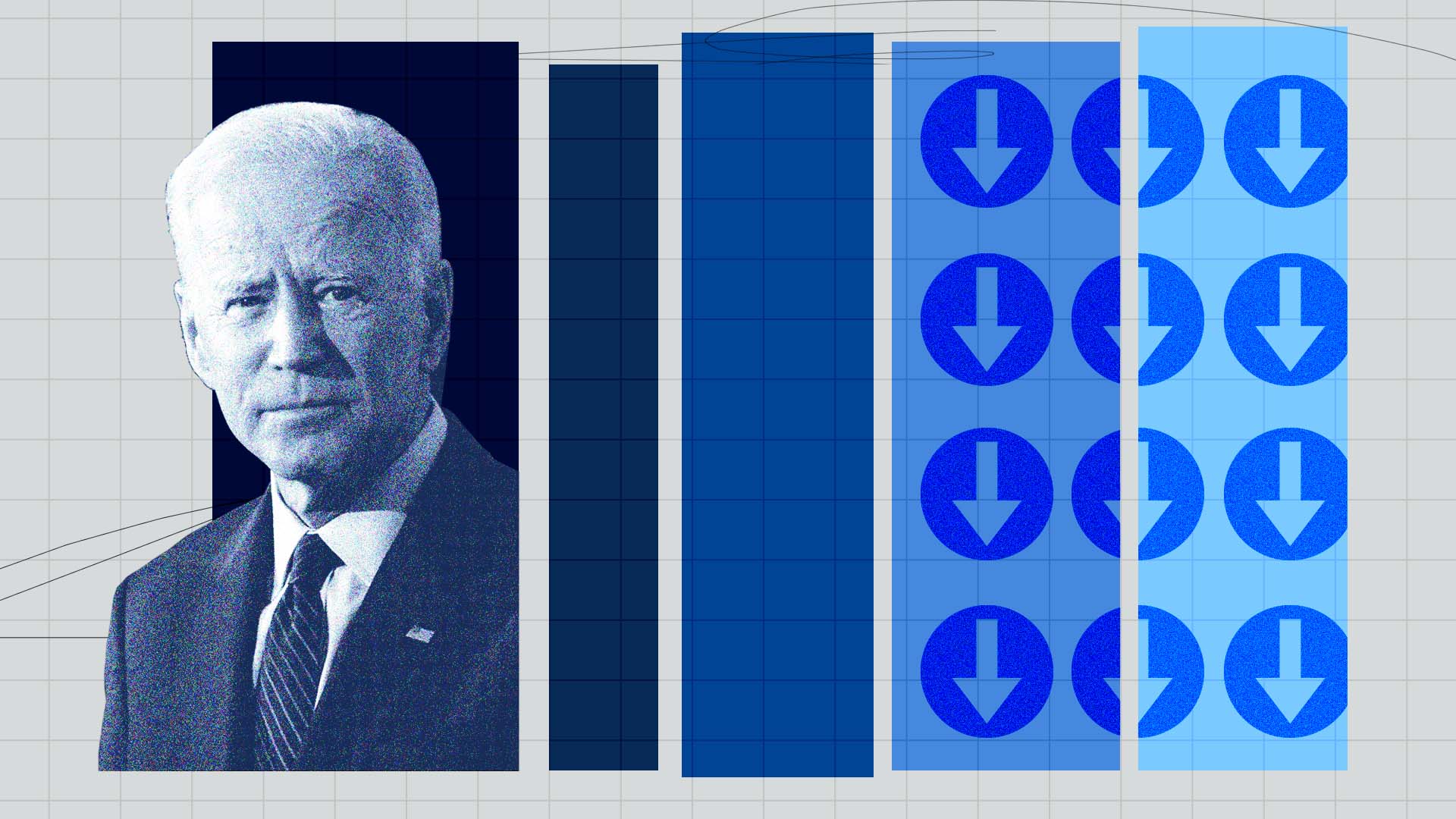 With less than four months until November’s midterm elections, the political environment has arguably worsened for Democrats as President Joe Biden’s dismal approval ratings abound across the country, including in states that will be key to his party’s hopes of holding both chambers on Capitol Hill, which face long odds.

Morning Consult Political Intelligence survey data gathered during the second quarter of 2022 shows voters in 44 states are more likely to disapprove than approve of Biden’s job performance, up from 40 states in the first quarter. It leaves the Democratic standard-bearer in a markedly worse position ahead of the midterms than then-President Donald Trump and his party faced in 2018, with attrition among Biden’s base a key factor, along with a comparatively more hostile review from independents and voters on the other side of the aisle.

Between the first and second quarters of this year, Biden’s net approval rating — the share who approve of his job performance minus the share who disapprove — was virtually unchanged in 23 states, and he saw mostly modest declines in most others.

Over the span of three months, Biden’s net approval rating dropped underwater in Illinois and — for the first time of his presidency — in Washington, Rhode Island and Delaware, the latter of which he has long called home.

In the First State, 45% approve and 52% disapprove of his job performance, marking a decline of 38 percentage points in his net approval rating over his tenure, which is only eclipsed by his downturn in dark red North Dakota.

Among states that proved vital to Biden’s 2020 Electoral College victory and host key Senate and House races in November — Arizona, Georgia, Michigan, Pennsylvania and Wisconsin — roughly 2 in 5 voters approve of his job performance, down by double digits after nearly uniform declines that started in the third quarter of 2021.

The latest survey data, based on responses gathered April 1-June 30 in all 50 states, suggests Democrats face a tougher environment than the GOP did in 2018, when it would go on to lose 40 House seats but add Senate seats due to a favorable set of in-cycle races in that chamber.

This year, Democrats are sporting a formidable crop of Senate incumbents who may be able to shake off some of the environmental factors with their own brand, and of course the president’s party could sustain higher enthusiasm and generic ballot improvements following the Supreme Court’s overturning of the constitutional right to an abortion in late June.

Related: Young Voters, Who Helped Biden to Victory, Are a Big Weak Spot in the Democratic Coalition

Digging into Biden’s base erosion

Biden is generally worse off across the country than he began his presidency among independents, but things would not look so badly for him if not for a notable erosion of support among voters of his own party, who make up a larger share of the electorate than those unaligned with a party. 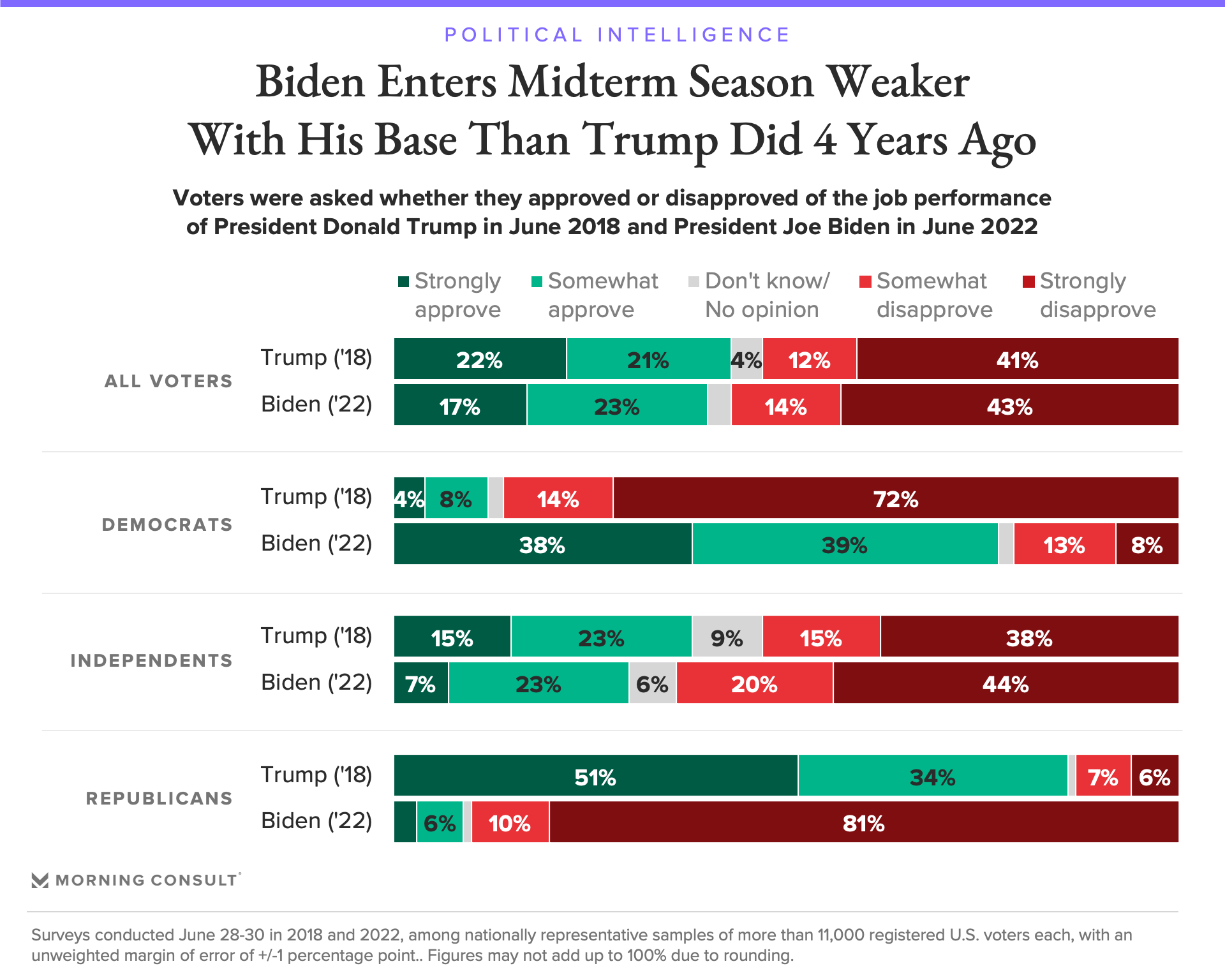 Nationwide survey data gathered June 28-30 shows that Biden’s approval rating among Democrats (77%) is lower than Trump’s was among Republicans (85%) over an identical period four years ago. The comparison looks worse for Biden when you account for the lukewarm backing from his base: 38% of Democrats “strongly approve” of his job performance, compared with 51% of GOP voters who said the same of Trump in 2018.

This enthusiasm gap plays out at the state level, including in Pennsylvania, Georgia and Michigan — all home to pivotal contests this fall where Democrats will need to find a way to energize their coalition to win important House, Senate and gubernatorial contests.

While Biden has faced criticism from progressive activists and officials who accuse him of not doing enough with the power and the potentially limited time he has to advance policy victories with Republicans nipping at their heels, state-by-state surveys show the president generally has the lowest numbers — and the most room to grow — among the smaller but nonetheless sizable chunks of Democratic voters who identify as moderate or conserative. 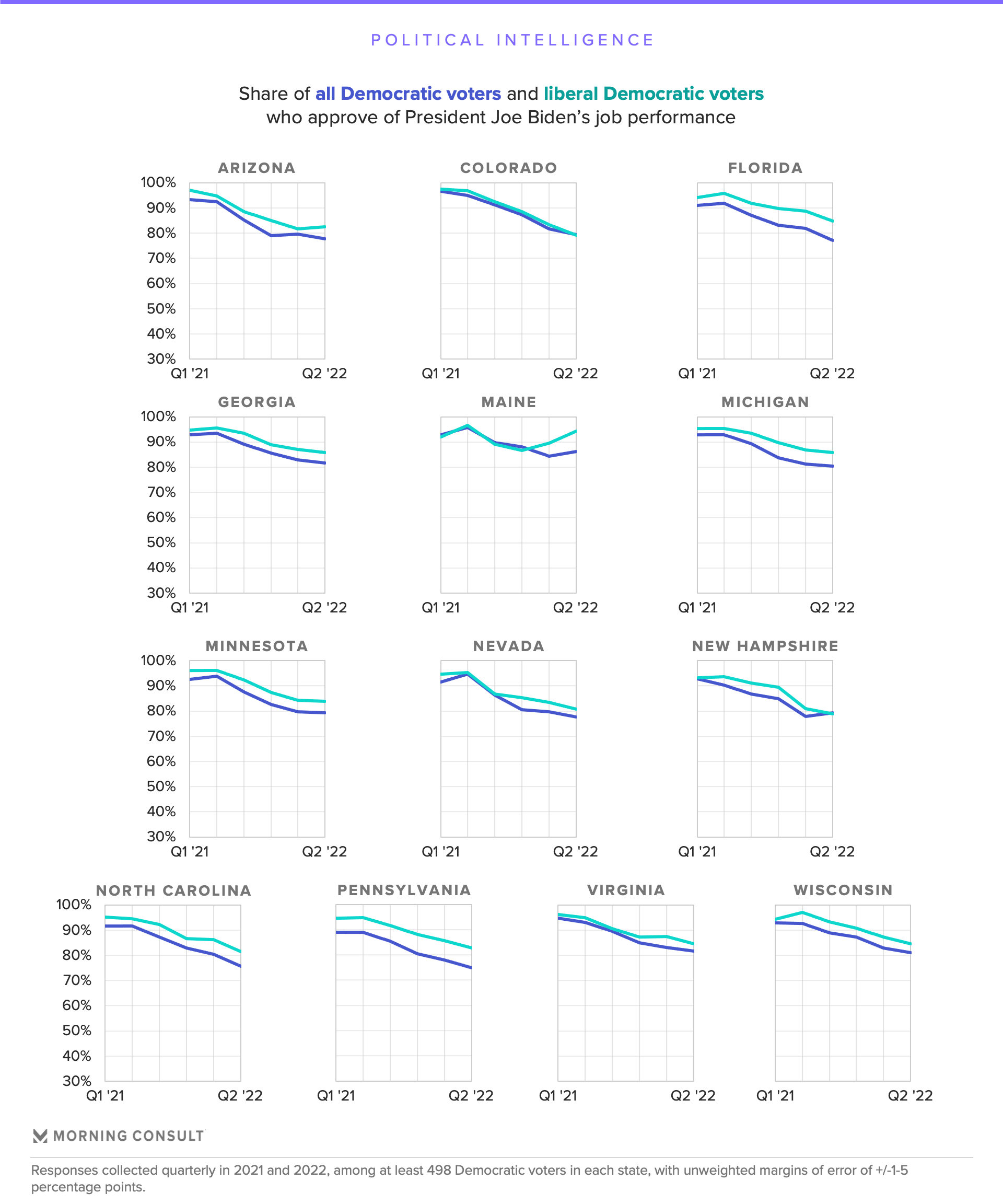 In many key states for the midterms and the 2024 election, Biden is more popular with Democrats who identify as liberal, who comprise the bulk of the party’s electorate nationwide, than he is with the broader Democratic voter base. That gap is especially acute in Pennsylvania, where 83% of liberal Democrats approve of him, compared with 70% of moderates and 60% of conservatives.

That erosion among moderate and conservative Democrats aligns with Morning Consult trend data showing that from the end of Biden’s 2020 campaign and the beginning of his presidency until now, the average voter has become more likely to place Biden further to the left on an ideological scale. The latest test, conducted in May, found the average Democratic voter viewed Biden and the Democratic Party as slightly more liberal than themselves.

A closer look at the makeup of the Democratic voter base’s ideological factions reveals race and ethnicity, as well as educational attainment and the types of communities in which these voters live, may be driving some of the dissolution among those who don’t identify as liberal. 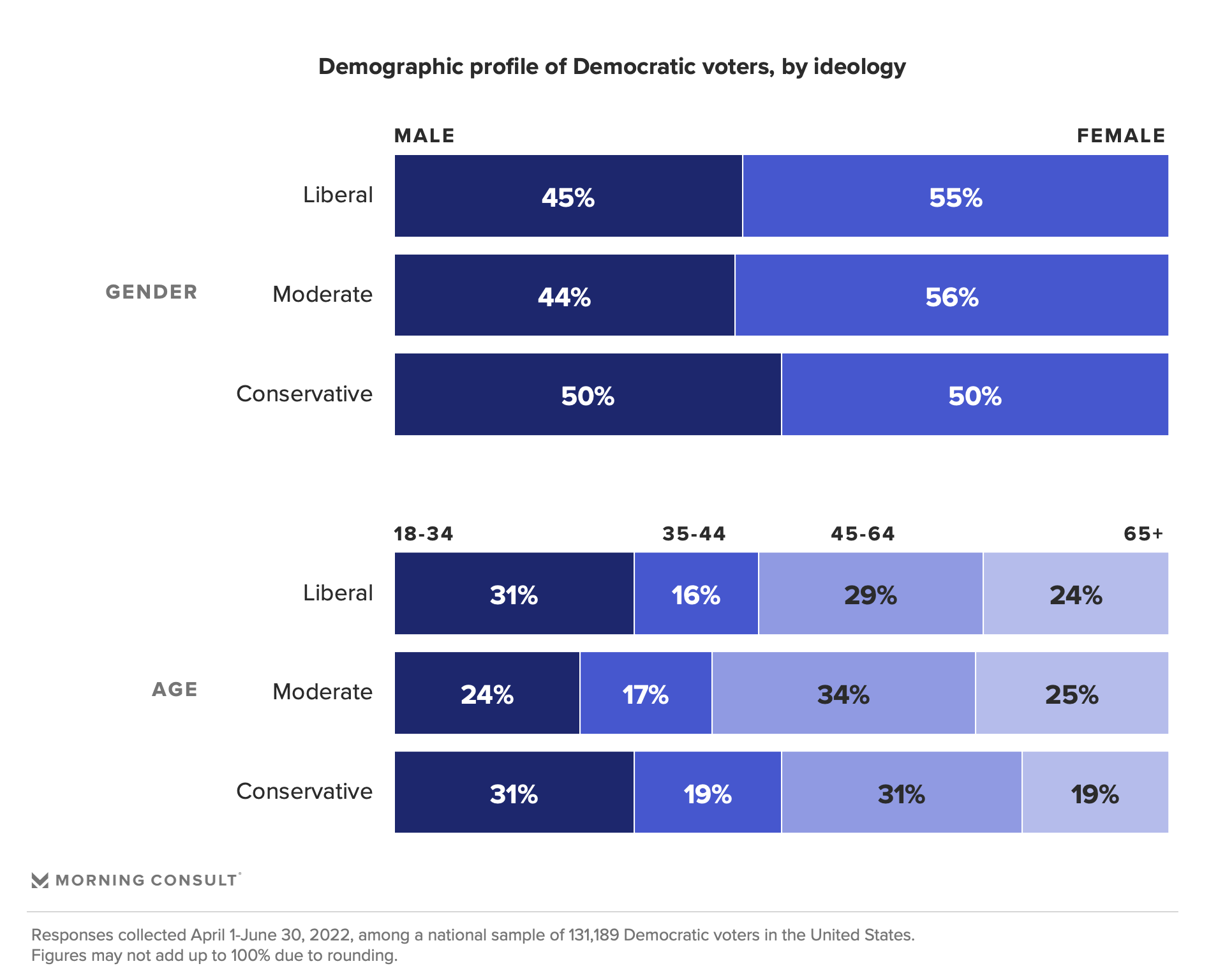 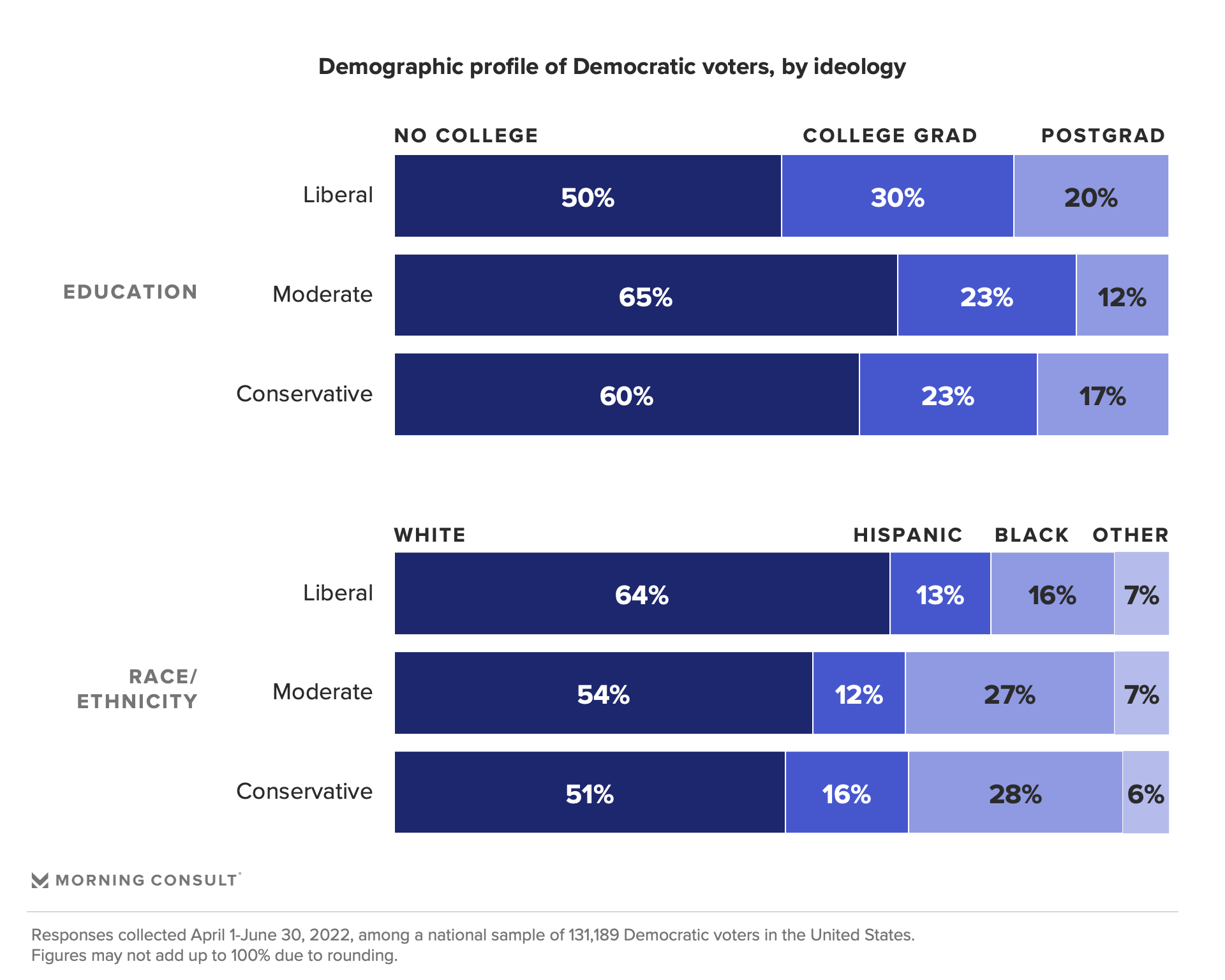 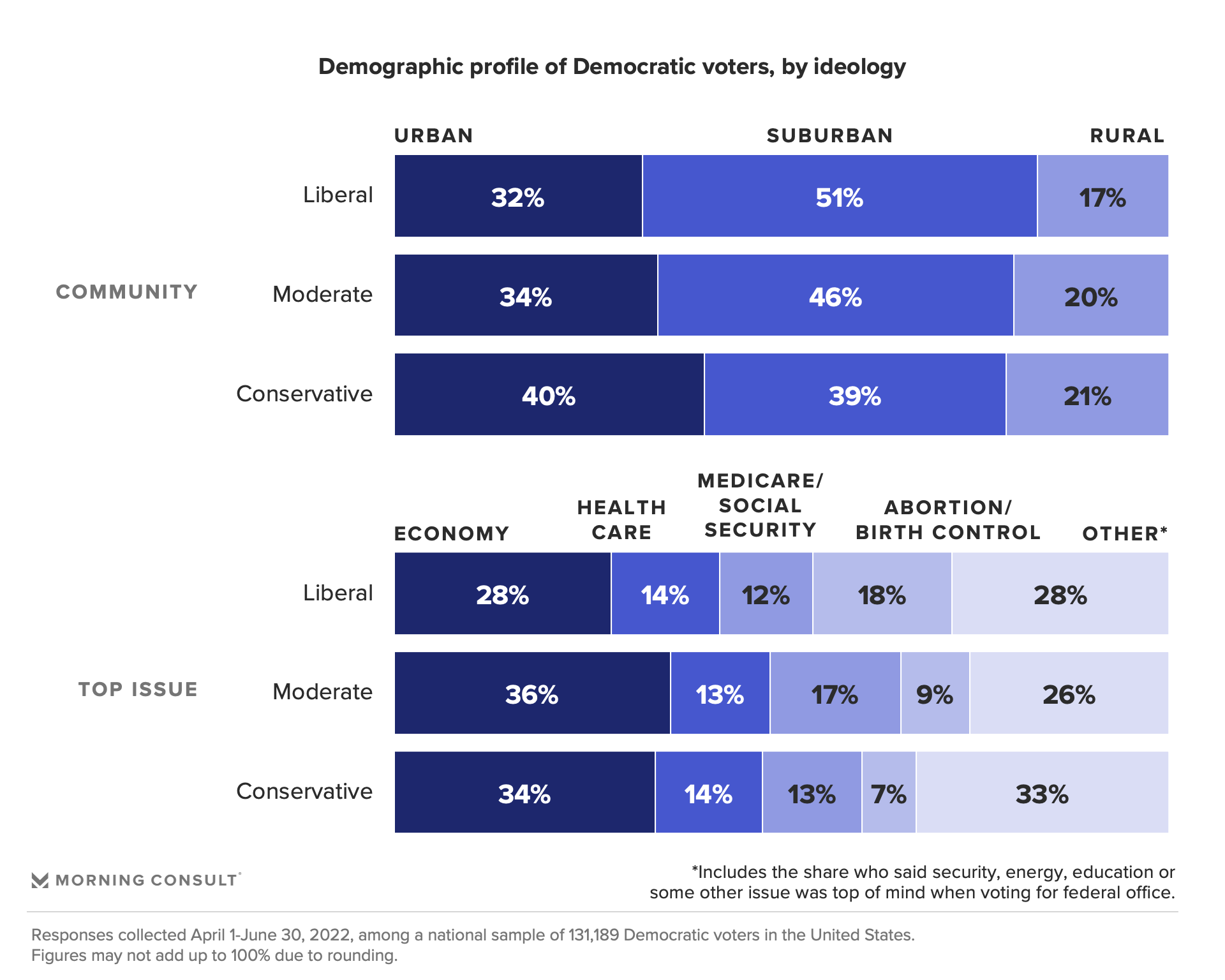 Compared with their moderate and conservative counterparts, liberal Democratsare more likely to hail from the suburbs, be white and have a college education. Liberal voters are about twice as likely as nonliberals to prioritize issues like abortion, contraception and equal pay — and notably less likely to elevate the economy.

The latter gap may be the most notable as America faces record inflation and voters — including Democrats — express fears of a looming recession under the president’s watch. As one Democratic pollster interviewed for this piece put it, these issues may pose less of an existential threat for higher-educated liberals than they do for moderate and conservative Democrats, who survey data showed are more likely to identify as lower-income, and are more vulnerable to financial strain even if gas prices drop a dollar or inflation recedes.

And that puts this president and his party in a conundrum — not just with the Democratic base, but with the overall electorate.

An Axios review of Gallup polling data of the past four presidents showed how presidential job approval ratings on Election Day were roughly equivalent to the data gathered in June of a midterm election year. If Democrats make any political magic this year, it’ll likely be due to negative partisanship — playing into voters’ fears about the Republican Party, including its posture toward abortion rights, and that could be made easier if Trump announces another presidential bid before the midterm elections.

Margins of error for responses from all voters in each state range from 1 to 5 points. For more detailed information, you can download the 50-state data set for Biden’s approval ratings among all voters here.