Media Companies and the Metaverse Paradox 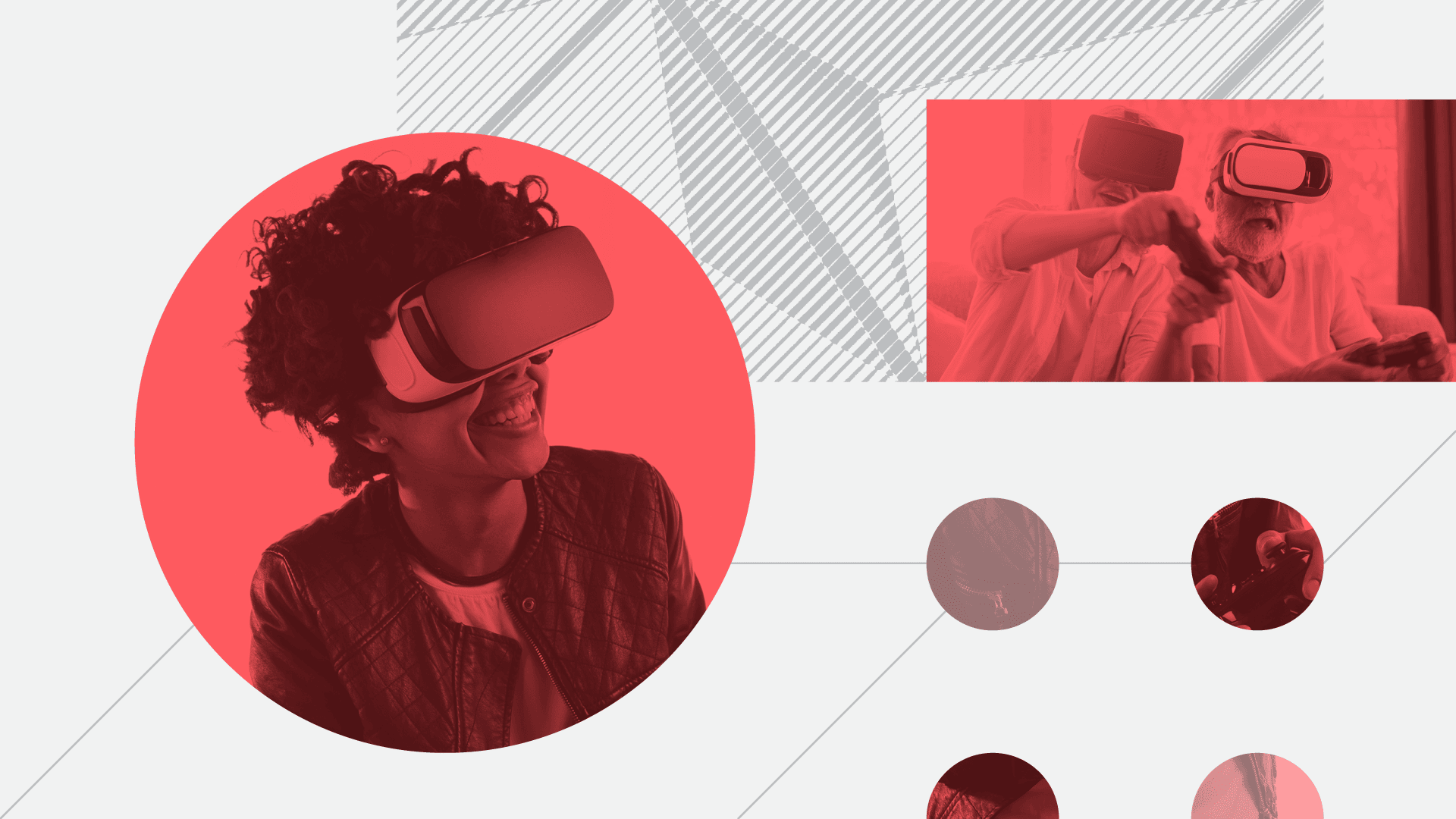 The metaverse first shot onto the radar of many last year after a big push from Meta that continues apace this year. And media companies — which are always on the hunt for new avenues to reach consumers — have been unpacking what the metaverse actually entails and strategizing about how they can capitalize on it. Many media companies are still grappling with how many resources they should devote to their metaverse research and strategy.

Metaverse awareness is low among consumers

June data shows that majorities of consumers across all major demographics said that they had seen, read or heard “not much” or “nothing at all” of the metaverse prior to being surveyed. 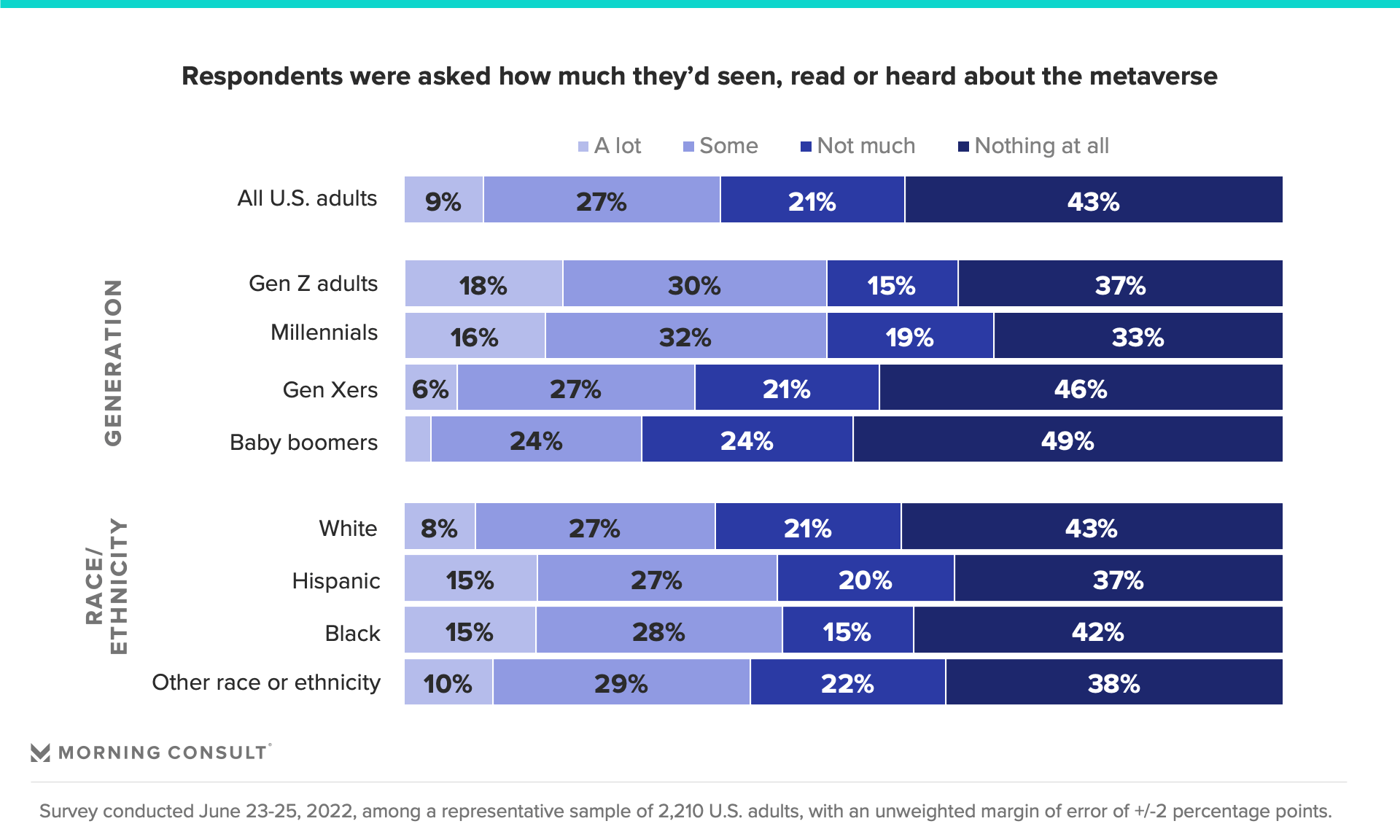 Just 9% of all adults had heard “a lot” about the metaverse and 27% had heard “some” about it. Gen Z adults and millennials were more familiar with the term than their older counterparts. Hispanic and Black respondents also indicated more awareness of the metaverse than other ethnicities.

While younger consumers’ familiarity with the metaverse is a big reason for media companies’ interest in the idea of a futuristic digital space, the relatively high level of unfamiliarity among U.S. consumers explains why most media companies have been more tepid about their investments to capitalize on such.

Consumers want the metaverse for entertainment activities above all else

Most adults are not yet interested in participating in metaverse activities, but of those they are interested in, entertainment as a category outranks all others — which should be encouraging for media executives. 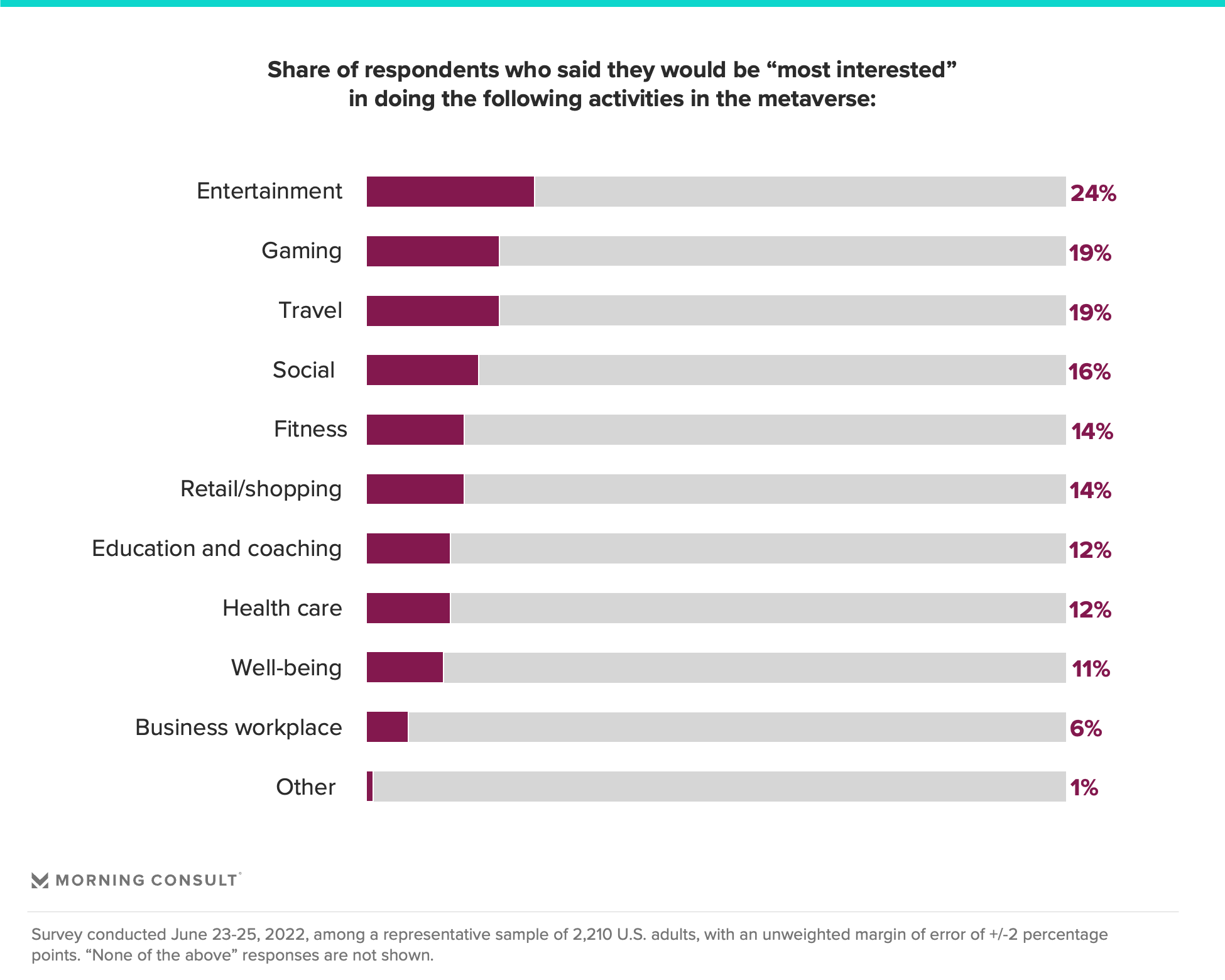 The top-ranked categories tend to be lifestyle and entertainment-adjacent ones, while those garnering the least interest were more practical categories such as health care and business, hinting at how consumers are currently looking to the metaverse: It’s mostly viewed as a means of escapism, rather than something to enhance productivity. Morning Consult’s data also broadly shows that it’s not just on media companies to lure consumers into the metaverse — the metaverse paradox is broadly applicable to other industries to some degree. Certain industries like gaming, however, are inherently going to develop more content geared toward the metaverse than others, regardless of low consumer awareness or interest at the moment.

For now, entertainment is the biggest draw to platforms that power the metaverse, and it shows. Just look at the buzz that entertainment-related metaverse events generate, like the Ariana Grande concert in Fortnite, the Electric Daisy Carnival in Roblox and the virtual Justin Bieber concert organized by interactive experience company Wave.

We’re already seeing other big names in the industry explore metaverse opportunities, including Disney, which has hired an executive to oversee metaverse projects, and the Sundance festival, which was accessible via virtual reality this year. And there are likely other, more modest metaverse-focused initiatives in the media industry that we don’t yet know about.

Why media companies should invest in the metaverse

It’s beneficial for media companies to reach consumers in the metaverse as platforms like Roblox and Fortnite continue to offer alternative entertainment spaces for younger consumers, who won’t stop ditching traditional media in the years ahead. Additionally, selling digital merchandise that relates to activations on these types of platforms could help companies recuperate marketing costs.

The metaverse could also be a way for media companies to cut production costs: Companies that invest in developing a realistic mountain landscape for a certain VR experience, for example, might be able to reuse that backdrop for a production. Currently, Epic Games is looking to have its 3D graphic-development tool Unreal Engine 5 power the development of hyper-realistic worlds, as seen in the recent “Matrix Awakens” demo, which could then be released as templates for media companies to fill up with virtual events — potentially saving companies the time and cost of developing their own digital venues.

While some metaverse initiatives may appear less justifiable in the face of inflation and fears of a recession, media companies shouldn’t abandon their efforts entirely, as tech giants’ pushes — particularly Apple with its dominance in hardware — into more advanced VR headsets could help spur VR adoption and make aspirational visions of the metaverse more plausible.

It’s possible that fully immersive VR experiences won’t become mainstream for the foreseeable future, but in order for this industry to make any traction in the metaverse, one group — either the media companies themselves or consumers — may have to take a leap of faith and become embedded in metaverse experiences and platforms before the other group fully buys in.