If the Biden Administration Declared a National Climate Emergency, About Half of Voters Would Back It

Over 4 in 5 Democrats would support a climate emergency declaration, compared with nearly 1 in 5 Republicans 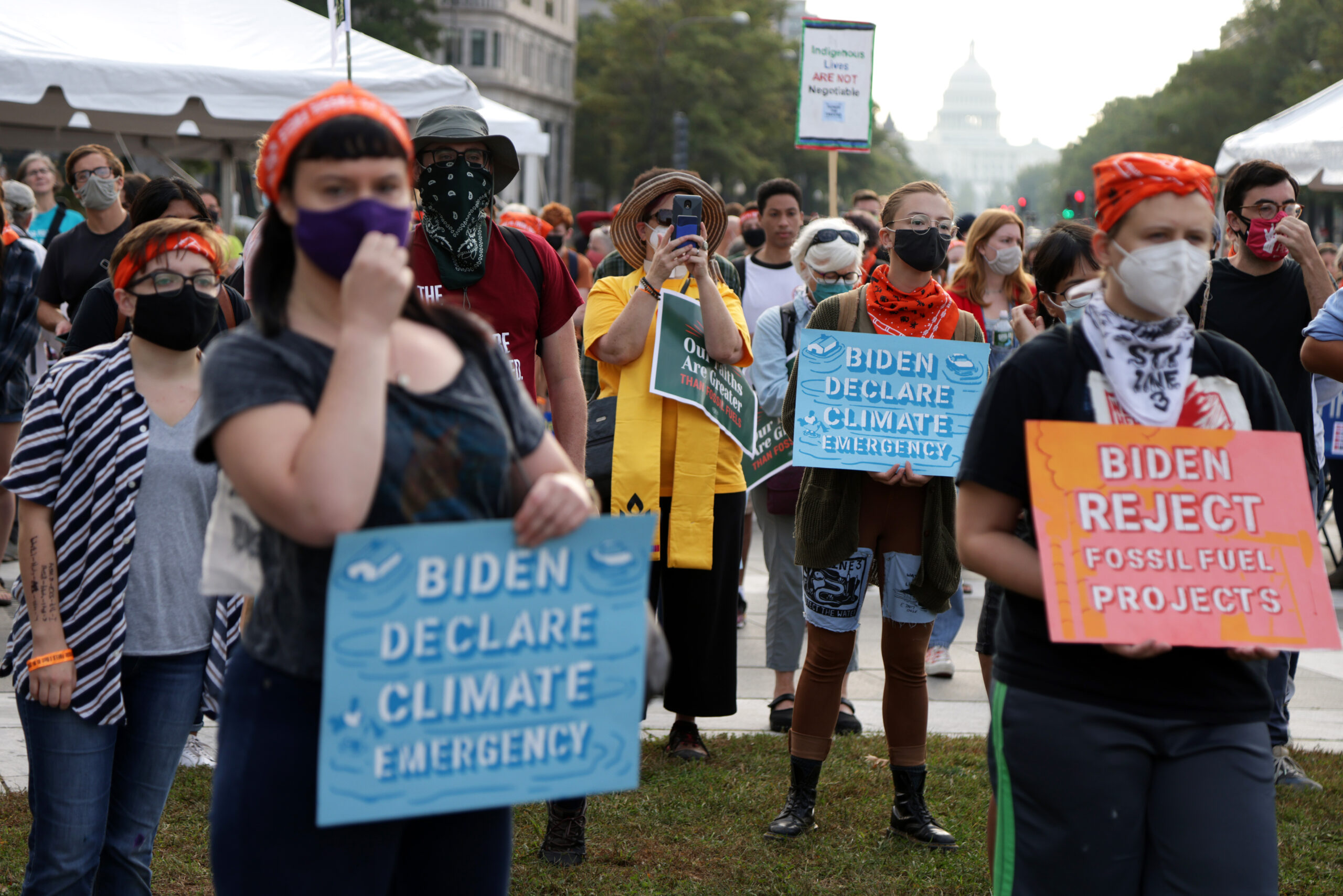 Climate activists participate in a rally at Freedom Plaza on Oct. 15, 2021, in Washington, D.C., urging President Joe Biden to declare a climate emergency. A Morning Consult/Politico survey found that 52% of registered voters would support climate change being declared a national emergency by the Biden administration. (Alex Wong/Getty Images)
By Julia Martinez

As the Biden administration considers a national climate emergency declaration amid historic heat waves, wildfires and droughts across the United States — and following critical blows to the president’s climate agenda — a new Morning Consult/Politico survey shows that 52% of voters would support the designation, with strong support from Democrats and heavy opposition from Republicans.

Respondents were provided with details about what a national emergency declaration on climate change from the Biden administration would entail and then asked if they would support or oppose it:

Survey conducted July 22-24, 2022, among a representative sample of 1,008 registered voters, with an unweighted margin of error of +/- 3 percentage points.

More voters than not back a climate change emergency declaration

President Joe Biden last week unveiled a slew of executive actions aimed at boosting offshore wind development in the Gulf of Mexico and the Atlantic, along with $2.3 billion for the Federal Emergency Management Agency, the Department of Health and Human Services and other agencies to distribute to communities coping with heat waves and heavy floods.

Despite the failed climate negotiations that will likely cause the nation to miss Biden’s climate targets, the president stopped short of declaring a national climate emergency, which could open up the potential for banning U.S. crude oil exports and halting offshore drilling, though not without the risk of legal challenges.

But Democratic lawmakers and environmentalists are urging Biden to be more aggressive and issue an emergency declaration anyway.

Earlier this week, six House staffers were arrested for refusing to leave the office of Senate Majority Leader Chuck Schumer (D-N.Y.) after calling on him to restart climate negotiations with Manchin.

Survey conducted July 22-24, 2022, among a representative sample of 1,008 registered voters, with an unweighted margin of error of +/- 3 percentage points.

Related: After Supreme Court Hands Down Ruling on Carbon Emissions, Public Split on Whether Decision Will Have Major or Minor Impact on U.S. Climate Targets
Climate Change Joe Biden