U.S.-U.K. Trade Advocates Can Cheer State-Level Deals Now and Push for Broader Negotiations After the Midterms

The United Kingdom’s “special relationship” with the United States will counterbalance trade skepticism, but a deal is far from certain 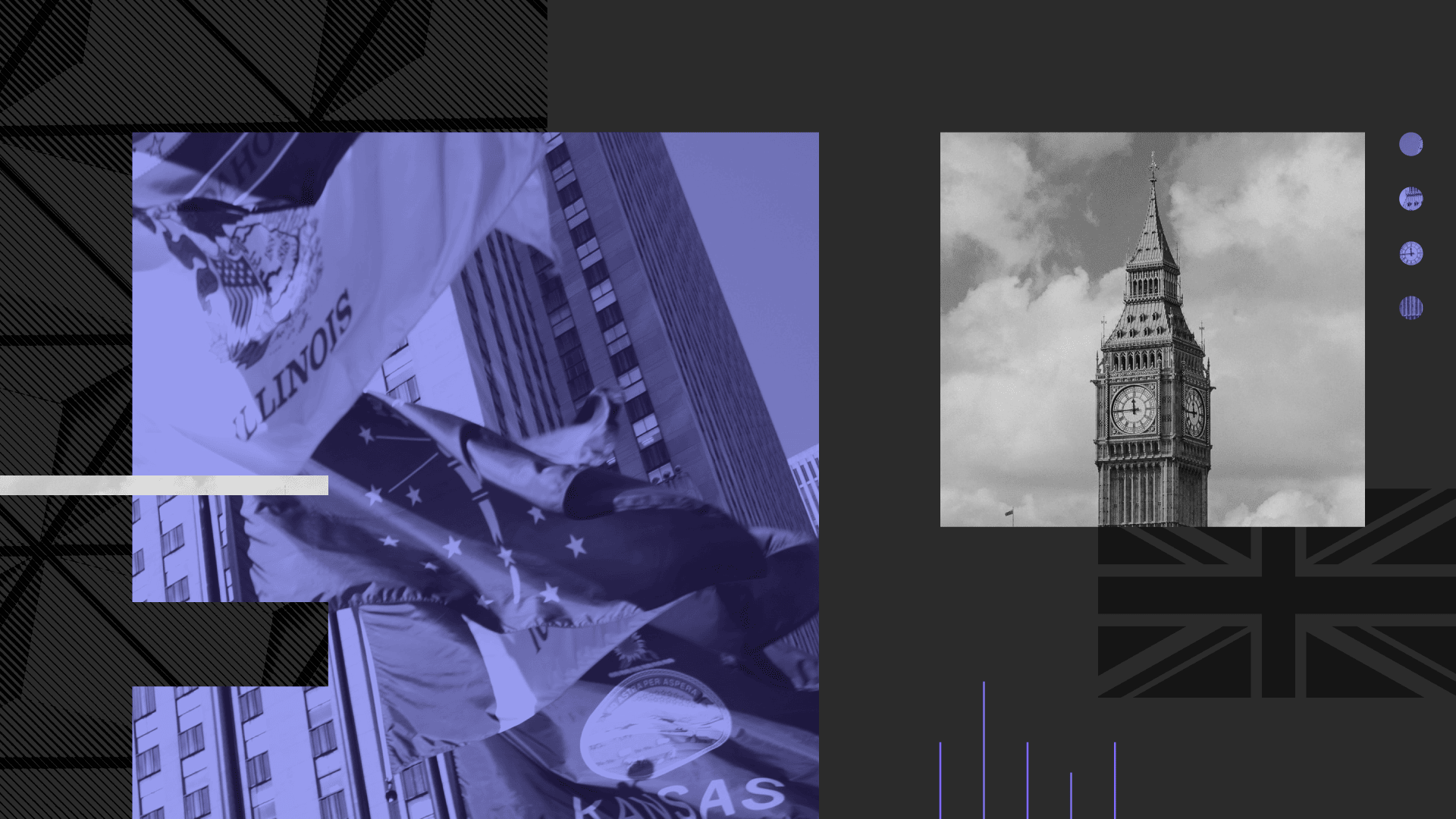 Why the United Kingdom’s deal with Indiana is worth watching

On May 27, the United Kingdom inked a trade agreement with the state of Indiana. The deal is unlikely to be an economic blockbuster: It is nonbinding, covers only 1.8% of U.S. GDP and is narrowly focused on quasi-regulatory issues — like mutual recognition of certain professional certifications, academic cooperation and state-level procurement — that fall under states’ legal jurisdiction. Tariff reductions, historically the bread and butter of trade agreements, are therefore off the table.

Despite this key limitation, the deal is worth watching for at least two reasons. First, it could quickly become a boilerplate template for a slew of U.K. deals with American states. U.K. officials claim they are currently looking at 20 states with which they’d like to sign similar agreements, including Oklahoma, North and South Carolina, and Texas. With the inclusion of states like Texas, which has an economy roughly the size of Canada, the deals could collectively begin to matter economically.

Second, assuming more states sign on, the United Kingdom may succeed in demonstrating that both red and blue states are open to trade deals, in turn enabling it to credibly prove to the Biden administration that U.S. voters wouldn’t mind a national deal. Indeed, voters’ presumed ambivalence on trade is, in part, why the Biden administration has repeatedly thrown cold water on the possibility of comprehensive trade deals with both the United Kingdom and the European Union, and has eschewed joining the successor to the Trans-Pacific Partnership in favor of the economically anemic Indo-Pacific Economic Framework.

Americans want a trade deal — even more than the Brits do

Our data suggests the Biden administration’s rationale for eschewing a potential U.S.-U.K. FTA holds little water and that the United Kingdom’s stepping-stones strategy likely has legs. A strong majority (67%) of U.S. adults support a U.S.-U.K. FTA. What’s more, support is bipartisan: 72% of Democrats and 66% of Republicans favor negotiating one. Many more British adults than not similarly support a trade deal with the United States — and the Tories would quite like to give them one to showcase their post-Brexit “global Britain” strategy.

U.S. Adults Are Even More Enthusiastic About a U.S.-U.K. Free Trade Agreement Than the Brits

Heading into the U.S. midterm elections, these highly bipartisan findings suggest that U.S. public opinion will remain broadly favorable toward a U.S.-U.K. FTA regardless of the elections’ outcome, and that companies that would benefit from such an agreement can meaningfully make the case for one.

In another point of alignment, both Democrats and Republicans favor trade relationships that are governed by various noncommercial parameters rather than purely commercial considerations, like goods’ price and quality. But they diverge when it comes to the particular factors they care about most.

While large majorities of U.S. voters say that trade relationships should protect domestic industry and respect labor and environmental standards, Republicans are more likely to emphasize the former, while Democrats are more concerned about the latter.

This distinction is instructive for government affairs professionals who are engaged in advocacy efforts to secure a national-level FTA. If Republicans take the House in November’s midterm elections, including protections for domestic industry in a potential deal will help Republican policymakers get it across the finish line. In this scenario, companies that have an interest in seeing a deal materialize should insist that such protections feature strongly in any such agreement.

Shares of voters who think trade relationships should…

Survey conducted May 9-12, 2022, among a representative sample of 2,005 U.S. registered voters, with an unweighted margin of error of +/-2 percentage points. Figures may not add up to 100% due to rounding.

While Democrats and Republicans hold similarly favorable opinions of the United Kingdom and support negotiating a trade agreement with it in nearly equal measure, a Republican-controlled Congress following the midterms would be particularly beneficial for a deal: Republican voters are more likely than Democrats to say the United Kingdom is the United States’ most important economic partner. Practically speaking, Congress would also need to reauthorize trade promotion authority to allow the administration to negotiate a deal. If the administration ultimately chooses to proceed down this path, our data suggests that a Republican-controlled Congress would, somewhat paradoxically, make it easier to do so.

Shares of registered voters who think the following have the most valuabletrade relationship with the United States for goods and services: 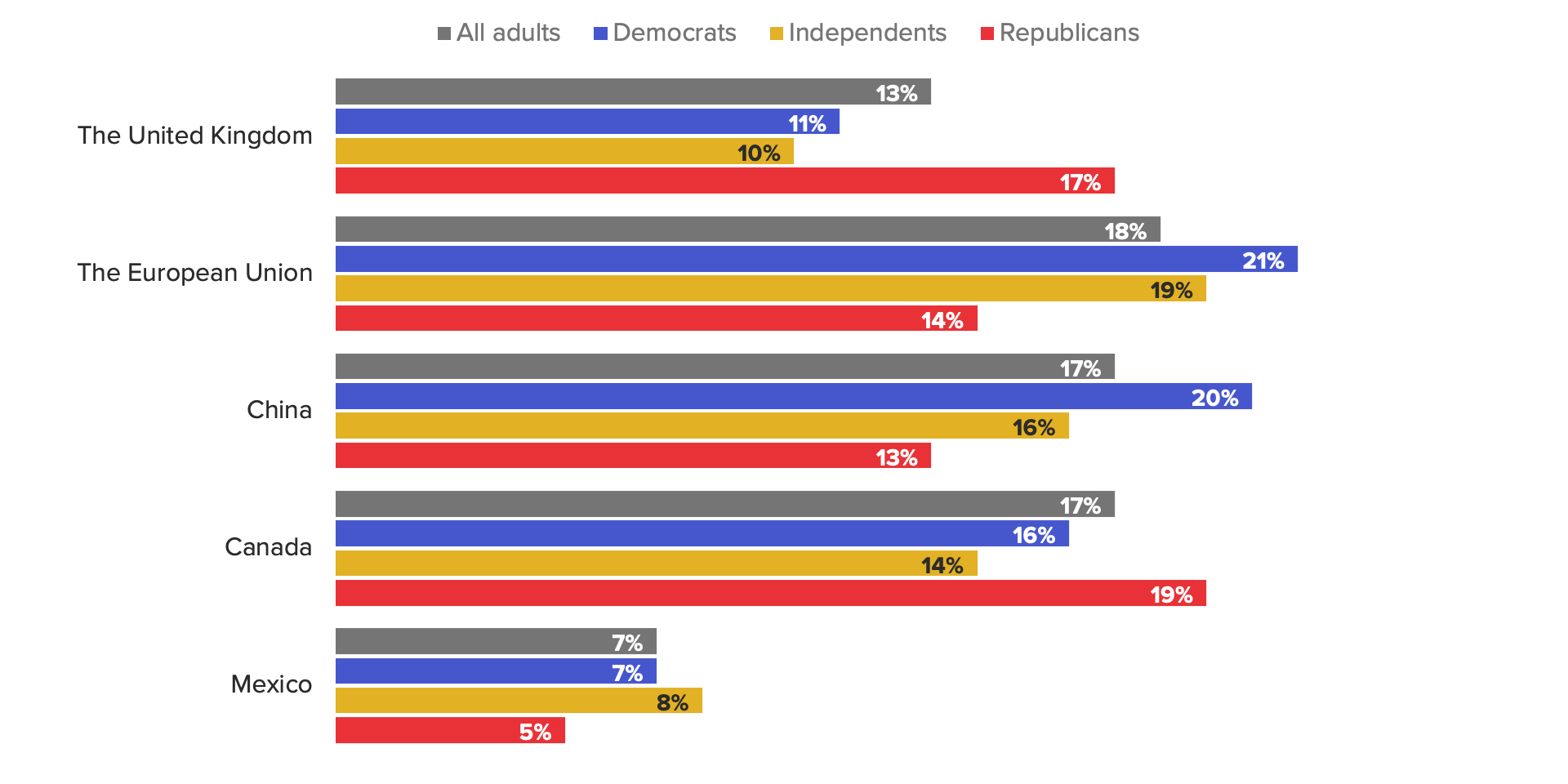 Survey conducted May 9-12, 2022, among a representative sample of 2,005 U.S. registered voters, with an unweighted margin of error of +/-2 percentage points.

The U.K. government’s recent move to invalidate parts of the Northern Ireland Protocol — the post-Brexit agreement with the European Union that controls how goods move between Britain and Northern Ireland, which was intended to prevent the partisan conflict from flaring anew — could be a fly in the ointment for a national trade deal, regardless of the outcome of the 2022 midterms. Ensuring peaceful politics in Northern Ireland is a rare instance of bipartisan agreement on foreign affairs, hearkening back to the United States’ role brokering the Good Friday Agreement, which underpins the protocol. Even if the Republican Party secures control of the House in November and is inclined to greenlight a trade deal, bilateral tensions over Northern Ireland could sink any possible agreement.

Another possible spoiler is the possibility of a U.K. general election. With Boris Johnson heading a lame duck government until the Tories name a new prime minister, the Labour Party has set its sights on wresting back control of Whitehall. This outcome is far from certain, however, and the Conservatives could hold on until regularly scheduled elections in 2025. Unlike in the United States, Brits’ views of their anglophone counterparts are split down party lines; those espousing left-wing views have a significantly less favorable attitude toward the United States. Companies that would benefit from an FTA should remain attentive to these dynamics, which could delay or even prevent a deal.

Left-Leaning U.K. Adults Are Less Keen on the United States Than Their Conservative Compatriots

Companies can safely support both state-level deals and an FTA, barring a collapse of the Good Friday agreement

All of this outlines a clear playbook for companies to use with U.S. policymakers post-midterms. First, it is low-risk to support state-level deals, as they are modest in scope and appear to contain little that would upset voters or provoke public hesitancy due to commercial overreach. Companies that would benefit from a U.S.-U.K. FTA should advocate for the state-level deals as confidence-building measures that could lay the groundwork for a national-level agreement.

The balance of public sentiment among both Democratic and Republican voters unambiguously favors a national-level U.S.-U.K. trade agreement. But companies lobbying for one on commercial grounds should tailor their efforts along partisan lines based on the outcome of the midterm elections: Advocacy should focus on the inclusion of labor and environmental protections under a Democratic Congress, and on industry protections under a Republican one.

In the event of a clear breach of the Northern Ireland Protocol, companies should stop short of a full-throated endorsement of a free trade agreement with the United Kingdom to avoid rankling policymakers on both sides of the aisle and wait to see how the contours of a successor protocol, if any, shape up.

Finally, if the U.K. Labour Party does succeed in taking back Parliament (a big “if”), companies may also need to massage relations as they push for an agreement to ensure that left-leaning British voters don’t derail their efforts.