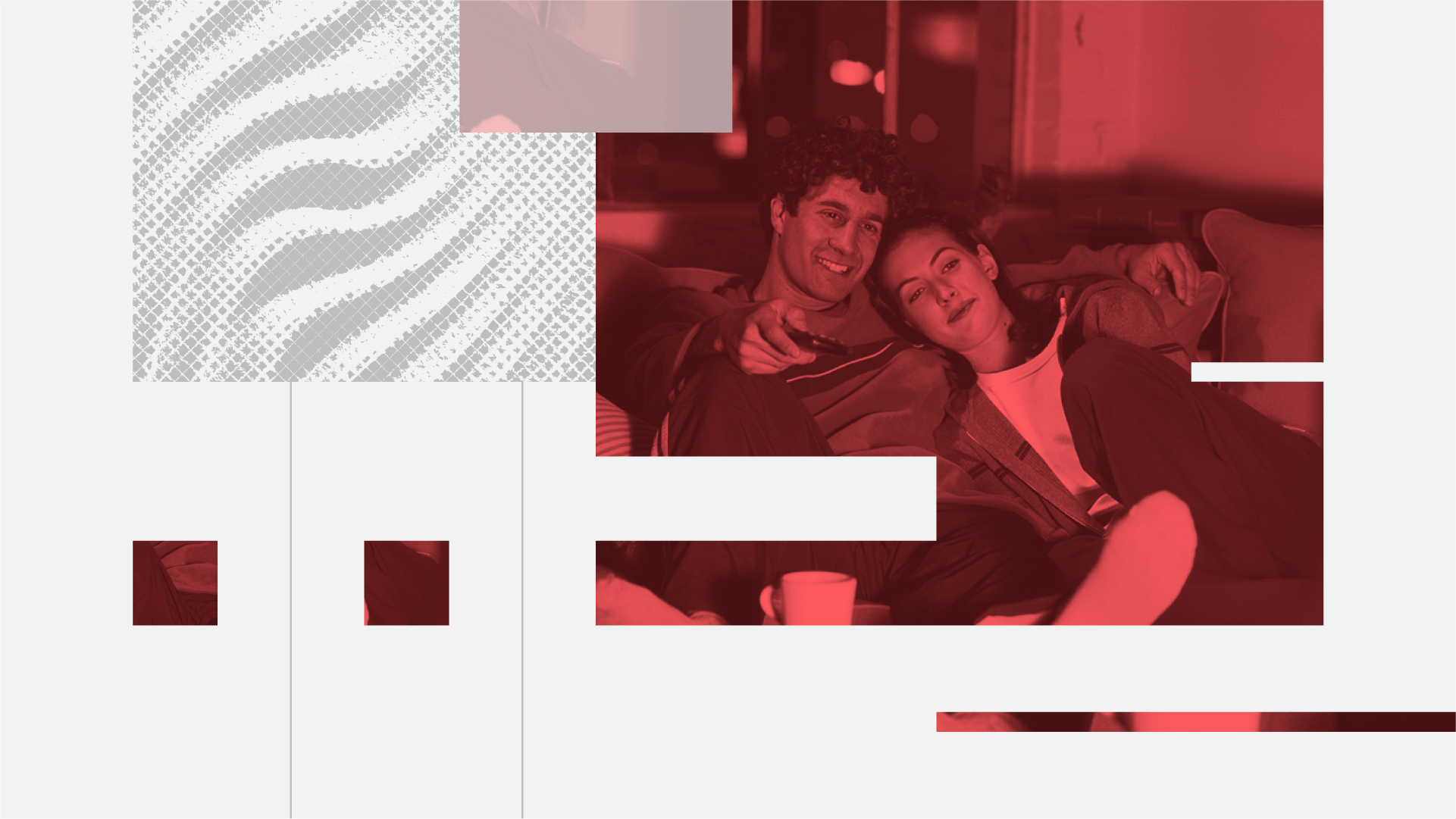 Brands can no longer afford to allow FAST services to fly under their radars, as usage of the biggest players now stacks up to that of well-known streamers in a way that’s likely surprising to many. Companies that don’t yet factor FAST into their marketing budgets should evaluate how they can start doing so.

Consumers shifting significantly toward ad-supported streaming has been accepted as fate ever since Disney+ and Netflix announced they would launch ad-supported tiers, but FAST services like Pluto TV and Tubi have long anticipated that future.

FAST services, which allow consumers to stream scheduled content linearly, as well as access on-demand movies and shows for free, have been around for years, but they have largely been relegated to a second-class tier of streaming services — something to be educated on and explored at another time.

But this blasé attitude means companies are missing out on the opportunity to reach a meaningful segment of video streamers. New Morning Consult research finds that FAST services accounted for four of the top 10 most widely used video streaming services as of late July.

Share of U.S. adults who reported using each service at least once in July 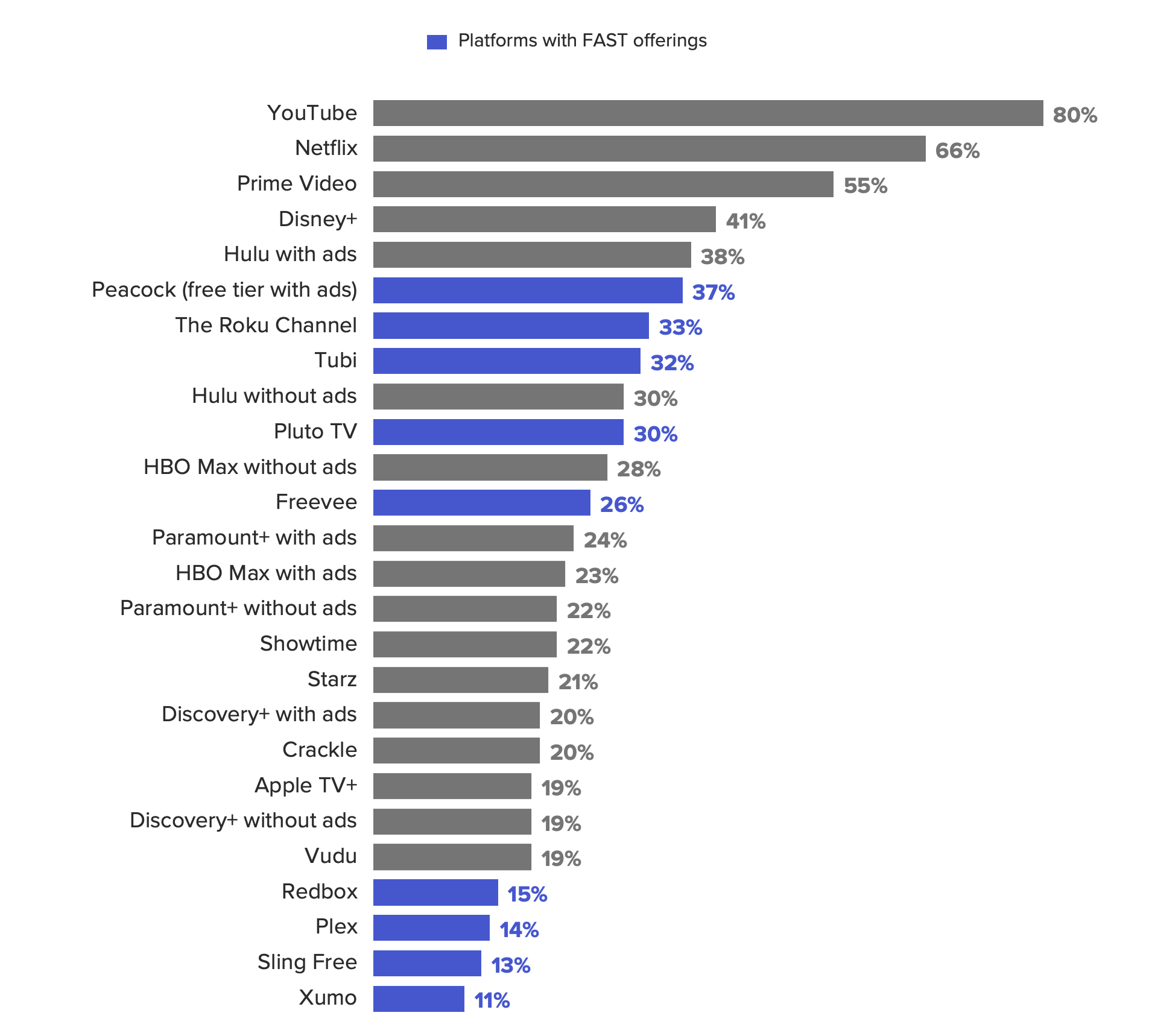 In other words, the reach of leading FAST players like The Roku Channel, Tubi and Pluto TV is likely much more significant than many suspect, especially in the context of major subscription video on demand players like Disney+ and Hulu. FAST services have not penetrated the zeitgeist with original content, but the fact that consumers are able to gain free access to platforms like Pluto TV and Tubi without the need to sign up for an account (as is required to stream low-cost ad-supported services) helps explain their rise.

Comparable user stats across these platforms are pretty much impossible to find, since uniform metrics (global or domestic) aren’t reported across SVOD and FAST services. And it’s unlikely they ever will be, so just how much within striking distance top FAST platforms are may come as a surprise to many.

It’s worth noting that the top FAST players aren’t used as frequently as the top SVOD and ad-supported video on demand players: 28% of U.S. adults each said they used Disney+ and Hulu’s ad-supported tier at least once per week in July, while those figures were lower for The Roku Channel (22%) and Tubi (20%). Moreover, greater than 50% of U.S. adults said that Netflix or Prime Video was their most-used streaming service in June.

Still, uptake and frequency of usage of FAST platforms are likely to increase in the year ahead as consumers turn more toward cheaper and free video streaming alternatives due to inflation and economic uncertainty.

Recent research conducted by Morning Consult in partnership with Variety Intelligence Platform finds that Gen Z adults and millennials are more likely than their older counterparts to say that they’ve made changes to their entertainment subscription mix due to inflation. This is confirmed by our additional research showing that more Gen Z adults and millennials reported canceling a video streaming subscription in the last month compared with older generations.

Survey conducted monthly among a representative sample of roughly 2,200 U.S. adults, with an unweighted margin of error of +/-2 percentage points.

Price sensitivity among younger generations may worsen in the months ahead, given that some may finally make big-ticket purchases that were previously delayed, and entertainment subscriptions could be on the chopping block. In addition, Netflix may implement its password sharing crackdown in the United States in 2023, making it even more likely that we’ll see a greater uptake of FAST services in the next year.

Brand advertisers can hit coveted demos by shifting more of their ad spend toward FAST platforms, whose audiences tend to skew more heavily toward millennials, who have significant buying power and who make up the largest cohort of parents. There’s a big opportunity for children’s brands to reach desired audiences through FAST advertising, and this explains why kid-focused channels can be found across many platforms like Pluto TV and The Roku Channel.

Shares who said they used each streaming service in July 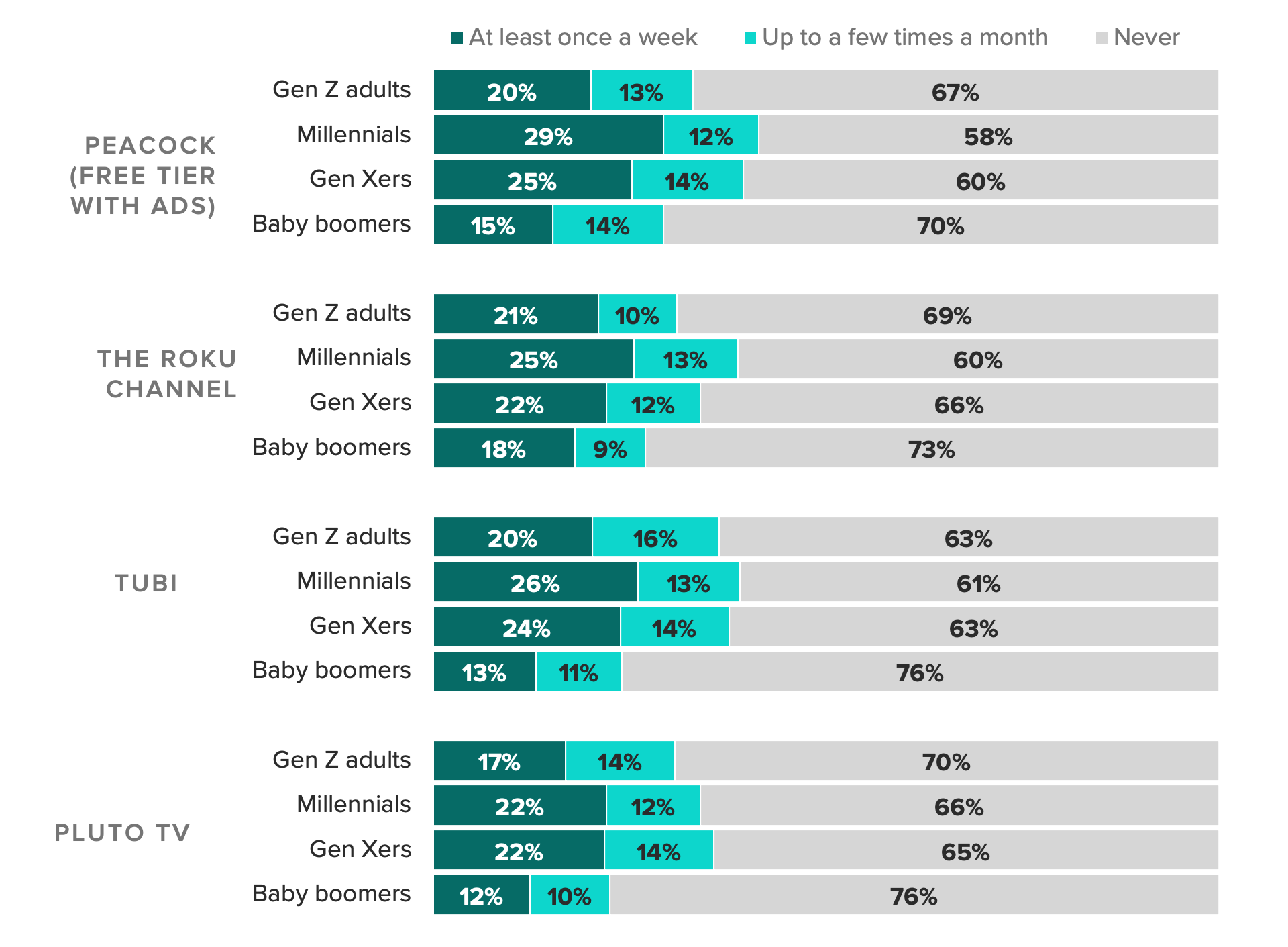 Furthermore, between a quarter and a third of millennials are habitual users of the major FAST platforms, viewing them a few times a week or more — and there’s likely room for those figures to grow. These services have smaller Gen Z adult audiences for now, but they could see a greater influx of younger viewers if they prioritize developing original content, rather than just championing classic TV shows and franchises.

Meanwhile, integrating FAST into brands’ marketing mixes lets them target audiences they might not be reaching — i.e., maximize unduplicated audience — if they’re focusing only on the major ad-supported services. For example, 13% of consumers who don’t subscribe to any video streaming services said they used The Roku Channel at least once in July, with 12% and 15% saying the same for Tubi and Pluto TV, respectively.

In their pitches to prospective advertisers, FAST platforms should emphasize their capacity for unduplicated reach. This could even be a motivating factor for media conglomerates like Disney that don’t already offer dedicated FAST platforms to launch them in order to better appeal to advertisers hoping to diversify their streaming advertising spend.

The caveat is that it will take time for new FAST platforms to generate meaningful revenue streams for media conglomerates, given the already-crowded streaming market. But a major company could launch a new service and plausibly reach 15 million monthly users within five years, which Pluto TV achieved. It generated over $1 billion in revenue last year and appears on track to do the same this year, hinting at what a significant revenue stream a popular FAST service can be.

While $1 billion in annual revenue in five years may represent wishful thinking for many media companies that are just now getting into the FAST game, any revenue will help soften the blow from consumers forgoing paid video streaming services as subscription fatigue worsens in the years ahead.