Monkeypox Disproportionately Impacts Gay and Bisexual Men. But the General Public Is Almost as Alarmed by the Disease

68% of gay or bisexual men are concerned about the spread of monkeypox in the United States, compared with 61% of all U.S. adults 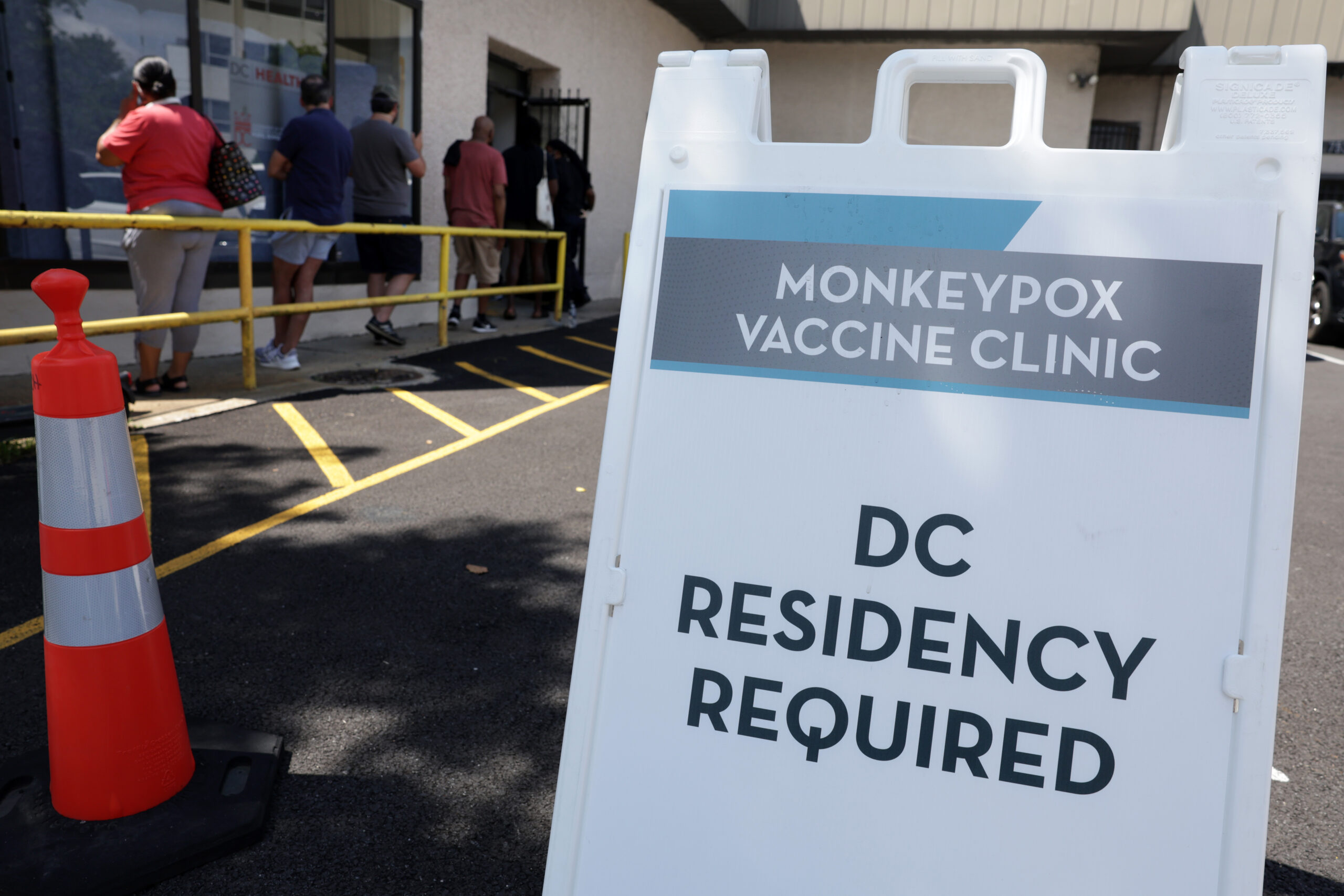 As the federal government wields its freshly declared emergency powers to battle monkeypox, public health officials are continuing their push to raise awareness about the outbreak and working to protect the especially hard-hit population of gay and bisexual men.

With a case count surpassing 10,000 in less than three months, the vast majority of those infected with the disease have been men who have sex with other men, prompting the World Health Organization to recommend that the group limit its sexual partners to reduce the spread.

But a new Morning Consult survey suggests that the general public has a tenuous understanding of the disproportionate impact monkeypox has had on gay and bisexual men, who are only slightly more likely than U.S. adults overall to express concern about the outbreak. And there is essentially no difference in knowledge among the two groups of how the disease is spread.

Respondents were asked if they are concerned about the outbreak of monkeypox generally, as well as the spread of the disease in the United States

Among all U.S. adults, 56% said they’re concerned about monkeypox generally, while 61% said they’re worried about the spread of the disease in the United States specifically. Among gay and bisexual men, those shares are 62% and 68%, respectively. The unweighted margin of error for all adults in the July 30-31 survey is plus or minus 1 percentage point, while the sample of gay and bisexual men has a 7-point margin of error. That means the true gap in levels of concern could be higher, but it could also be lower.

“Gay and bisexual men certainly should be more concerned because it is predominantly affecting their population,” said Dr. Carlos Rodriguez-Diaz, associate professor of prevention and community health at George Washington University.

“I don’t think we’ve been doing a great job in increasing awareness and also creating specific efforts to help” gay and bisexual men, he added, though “at the same time, we have to educate the general community.”

Data suggests messaging about monkeypox can be improved

An expert on health inequities among sexual and gender minority groups and people living with HIV, Rodriguez-Diaz noted the especially heavy toll monkeypox has taken thus far on Black and Latino populations, further underscoring the “need to tailor messaging that is relevant for different communities.”

The Morning Consult survey suggests plenty of room for improvement in that messaging. Respondents were provided with descriptions of four transmission methods of monkeypox — using language from the Centers for Disease Control and Prevention’s website — and asked to select whether they thought each was a way in which the disease could spread.

Respondents were asked to select any, if any, of the following ways* monkeypox can spread: 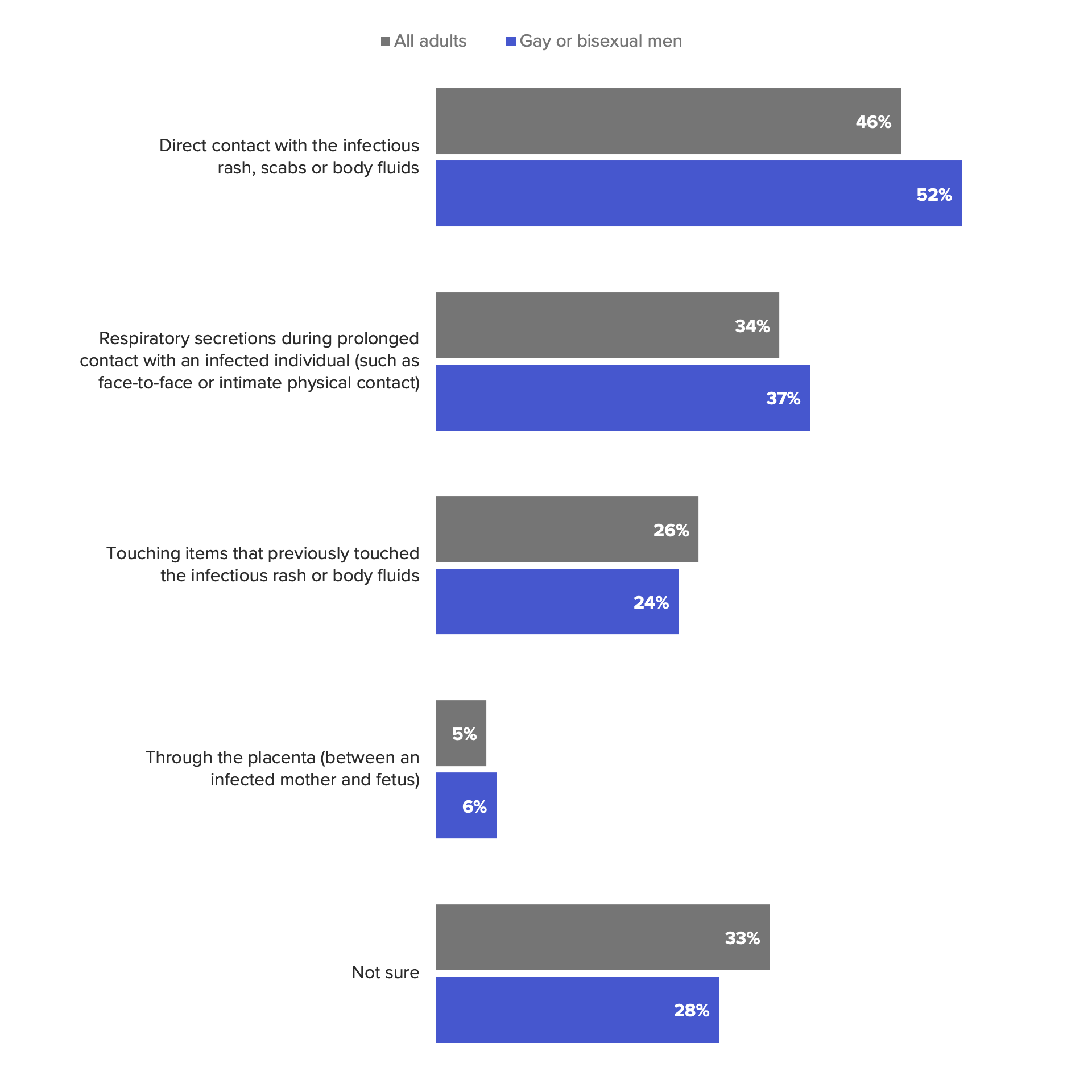 *Transmission descriptions via the Centers for Disease Control and Prevention.
Survey conducted July 30-31, 2022, among a representative sample of 4,420 U.S. adults, with an unweighted margin of error of +/-1 percentage point.

Roughly half of gay and bisexual men and a slightly smaller share of the overall public were able to correctly identify direct contact with the infectious rash, scabs or bodily fluids as a means of contracting monkeypox.

About a third from each sample pinpointed respiratory secretions during prolonged contact with an infected person, and a quarter of each said that touching items that had touched the monkeypox rash or scabs could result in transmission.

Meanwhile, a third of the public and 28% of gay and bisexual men said they were “not sure” how monkeypox can spread.

That general lack of awareness on the specifics of how monkeypox spreads is no surprise to Dr. Erica Johnson, an internal medicine specialist at Johns Hopkins Bayview Medical Center in Baltimore and chair of the Infectious Disease Board of the American Board of Internal Medicine. Johnson said she’s been getting just “as many questions about monkeypox from my patients who identify as gay or bisexual as I have from patients who don’t identify in those groups.”

“I think with any infection that people are experiencing for the first time or hearing about for the first time, it can always be a little bit hard to get the information out in a really effective way,” Johnson said, adding that a person’s primary care doctor will “be the best source of information about one’s own individual risks.”

Much of the federal government’s recent response efforts have centered on ramping up supply of the Jynneos monkeypox vaccine, the only Food and Drug Administration-approved offering. With demand far outpacing supply, the FDA and the Department of Health and Human Services last week signed off on a plan that would enable five shots to be administered per vial, with those injections coming under the top layer of skin as opposed to being delivered into fatty tissue below the skin.

Administration officials said the 441,000 existing Jynneos doses could be stretched to 2 million shots under the dose-sparing strategy, a potential game changer for a population of gay and bisexual men who are clamoring to get vaccinated.

Responses from those who have already been vaccinated are not shown.
Survey conducted July 30-31, 2022, among a representative sample of 4,420 U.S. adults, with an unweighted margin of error of +/-1 percentage point.

Despite expressing similar levels of concern about monkeypox, gay and bisexual men were more likely than the general public to say they’d get vaccinated against the disease if the vaccine were accessible to them (55% to 38%). About 1 in 5 gay or bisexual men said they would not get vaccinated against the disease, compared to roughly 3 in 10 U.S. adults overall.

The LGBTQ community is one that largely “follows science, follows recommendations and are willing to take the preventive recommendations,” Rodriguez-Diaz said, noting high rates of COVID-19 vaccination among the group. “So we just need to make it available. We currently have more arms than vaccines.”

That instinct to follow the recommendations of scientific experts aligns with the levels of trust gay and bisexual men have in the CDC: 7 in 10 said they’re confident in the agency’s ability to control the spread of monkeypox in the United States, while nearly 3 in 5 U.S. adults overall said the same. The CDC and HHS did not respond to requests for comment.

U.S. adults were asked how confident they are in each of the following’s ability to control the spread of monkeypox in the United States: 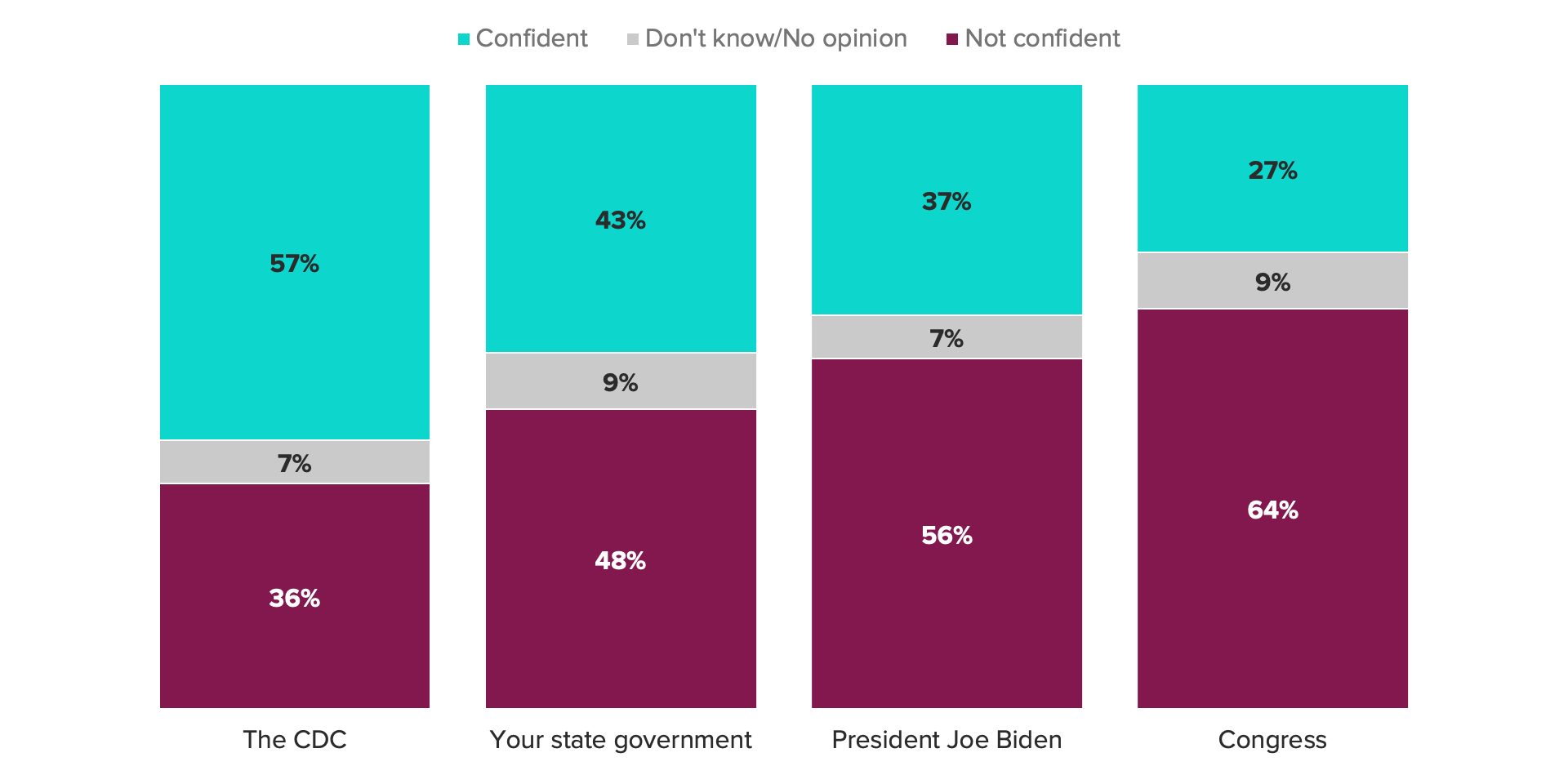 None of the other selected individuals or institutions — state governments, President Joe Biden and Congress — inspires confidence to control the disease’s spread from a majority of the public. Among gay and bisexual respondents, however, roughly half expressed confidence in Biden’s performance on the matter.

The high levels of confidence in the CDC to handle the spread of monkeypox was “reassuring” to Johnson, especially after flagging public trust she saw “in medicine or in science or in institutions in general” tied to the COVID-19 response.

“Trust in our institutions to help provide information to controlling the infection and seeking treatment when necessary, presenting for care, following through with recommendations for public health with respect to isolation, all of these things,” she said, “are really necessary in order to gain control of this particular infection.”