Is Slower Spending Growth Written in the Stars? 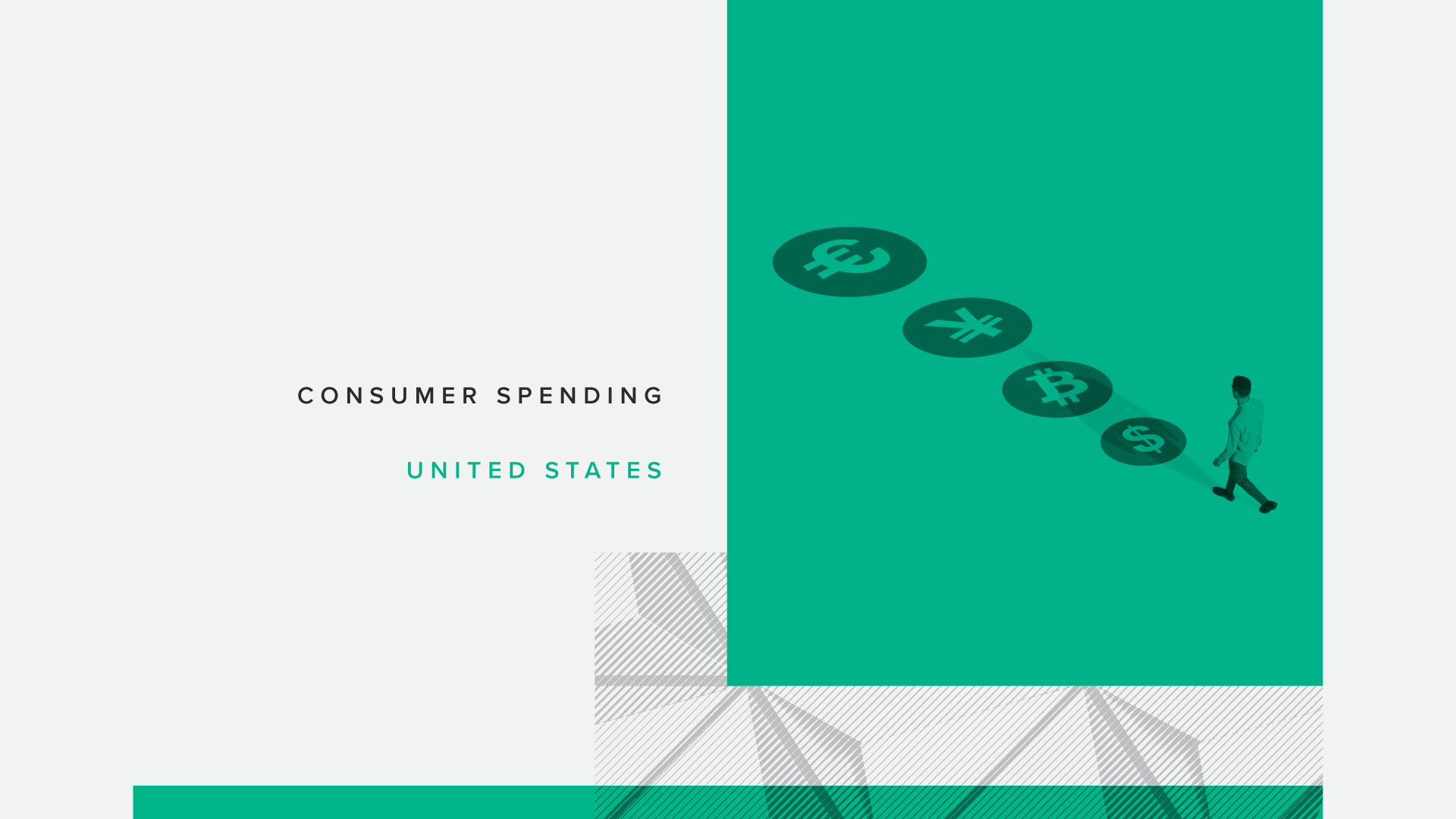 Robust spending by higher-earning adults is masking the degree to which purchasing power is deteriorating across the income distribution of U.S. consumers, according to the latest release of Morning Consult’s Consumer Purchasing Power Barometer. Derived from the Price Sensitivity and Substitutability indexes in our Supply Chain Indexes of Consumer Inflation Pressures, the CPPB combines the two indexes most specifically aimed at capturing the effect of rising prices on purchasing decisions. Here, we take a closer look at the CPPB, for the first time breaking it down by income to uncover the heterogeneity in the effects of inflation on spending.

The erosion of purchasing power

Combined in the CPPB, the Price Sensitivity and Substitutability indexes provide a unique consumption-based snapshot of how inflation affects consumer purchasing power. Price Sensitivity captures the extensive margin of spending, identifying lost spending when consumers walk away from a purchase due to a higher-than-expected price. Substitutability, on the other hand, measures adjustment along the intensive margin of spending, capturing those who opt for cheaper substitutes when their wallets are squeezed.

Whenever we observe more combined sticker shock and trading down behavior than not, the CPPB will be negative. Whenever the opposite is true, the combined index will be positive. Below, we show how the CPPB has evolved over the past five months in comparison with real spending growth from Morning Consult’s U.S. Household Finances and Spending survey. Both the index and real spending have deteriorated since March, with large declines in the CPPB in both April and June. For comparison, the chart also displays recent values of growth in real personal consumption expenditures from the Bureau of Economic Analysis. While the history is admittedly short, movement in the CPPB appears to lead real PCE growth by a month. 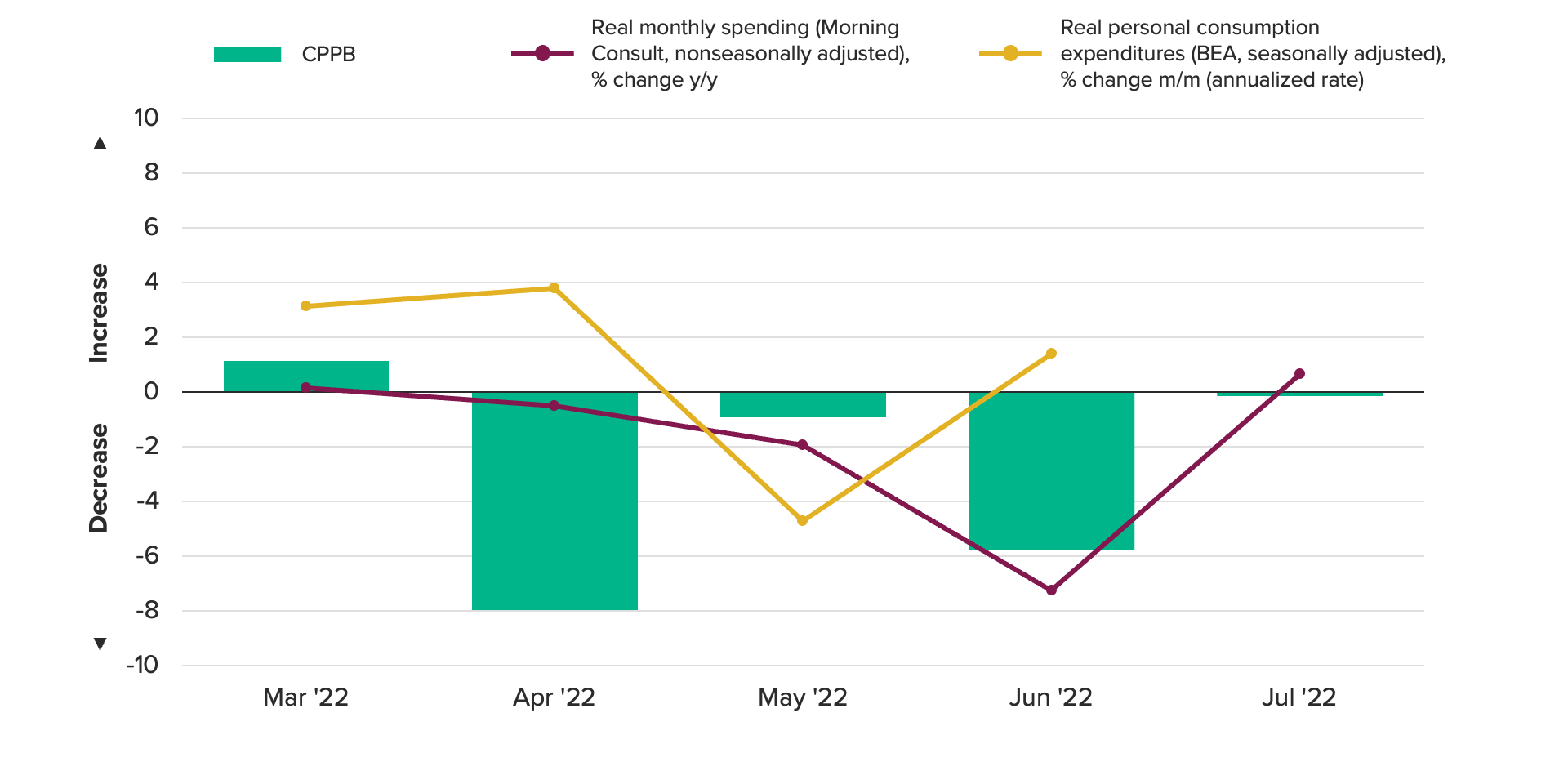 Sources: Bureau of Economic Analysis, Morning Consult Economic Intelligence. The CPPB is calculated by multiplying the Price Sensitivity Index values for each month by -1/3 and the Substitutability Index values by -2/3 and adding them together.

On its surface, the July CPPB reading appears to be a positive development: As annual inflation slowed, purchasing power rebounded from June to its highest level since March. However, a deeper look at divergences across demographics reveals worrying signs for the trajectory of consumer spending growth. In July, CPPB scores bore a close association with income, with high-income adults representing the only group with positive readings. As persistently high inflation puts growing pressure on household budgets, adults earning less than $100,000 are disproportionately feeling squeezed.

According to Morning Consult’s Household Finances & Spending survey, not only are adults below this income threshold consistently less likely to report being able to save each month, but the share who said they have money left over each month has trended lower over the past year. This pattern holds especially true for middle-income earners, who had the most pronounced contraction in their ability to cover expenses — let alone save — in July. This same cohort also expressed the largest annual decline in confidence about their households’ ability to afford monthly housing payments and grocery bills last month. Higher earners, meanwhile, remain more insulated against inflation, with little change in the share who say they have money left over after paying monthly expenses compared with earlier in the year. 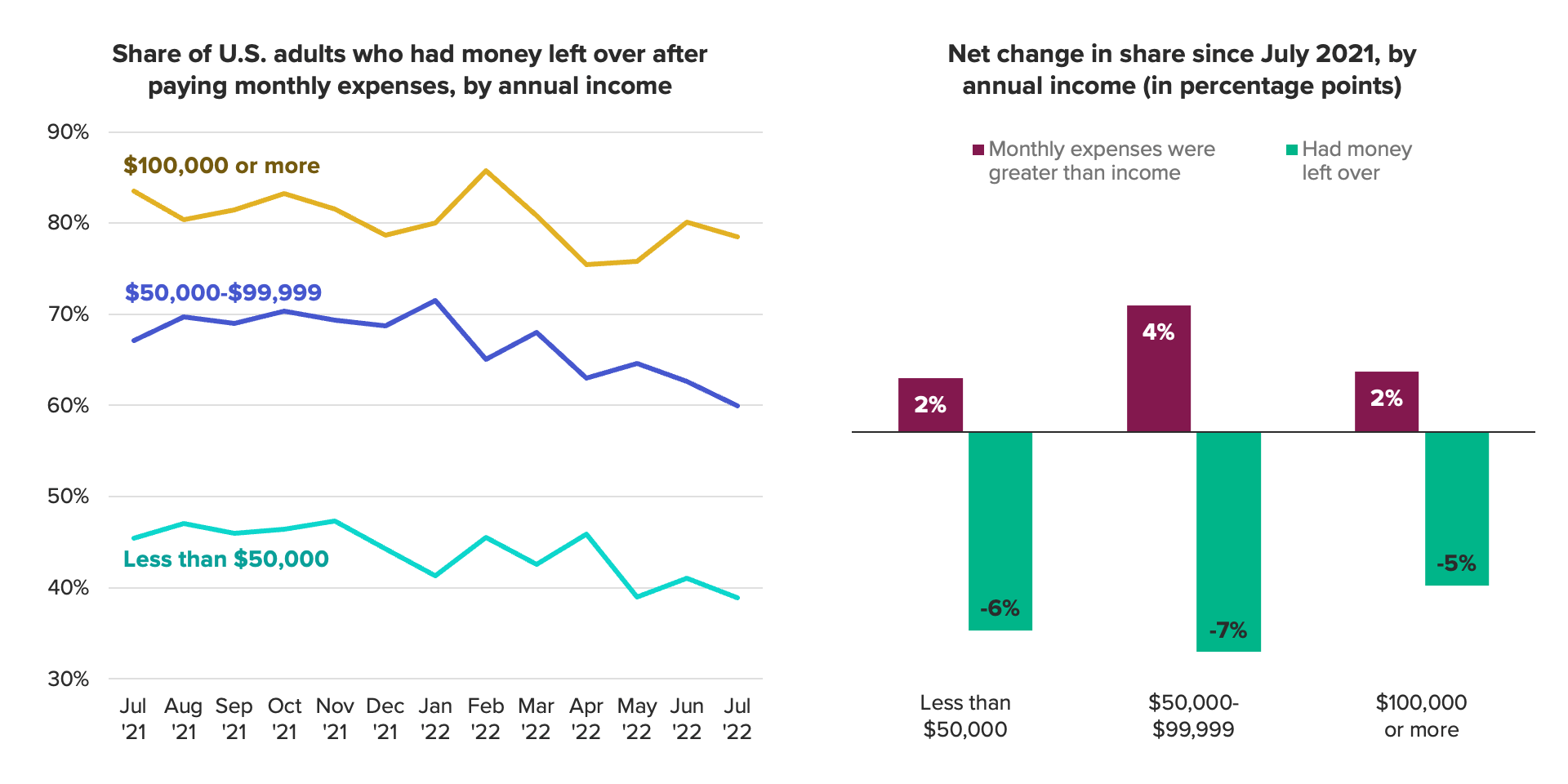 Diminished financial wiggle room exacerbated by the relentless march of inflation has weakened the will to spend among middle- and lower-earning households, amplifying the consumer response to rising prices. Specifically, in contrast to the highest-income adults, consumers earning less than $100,000 expressed elevated sticker shock in July, captured in our Price Sensitivity Index shown below. This can also be seen in the CPPB, which shows that the purchasing power of all adults in households earning less than $100,000 declined in July.

Economic Intelligence
Purchasing Power Muted for All Except Highest-Earning Adults 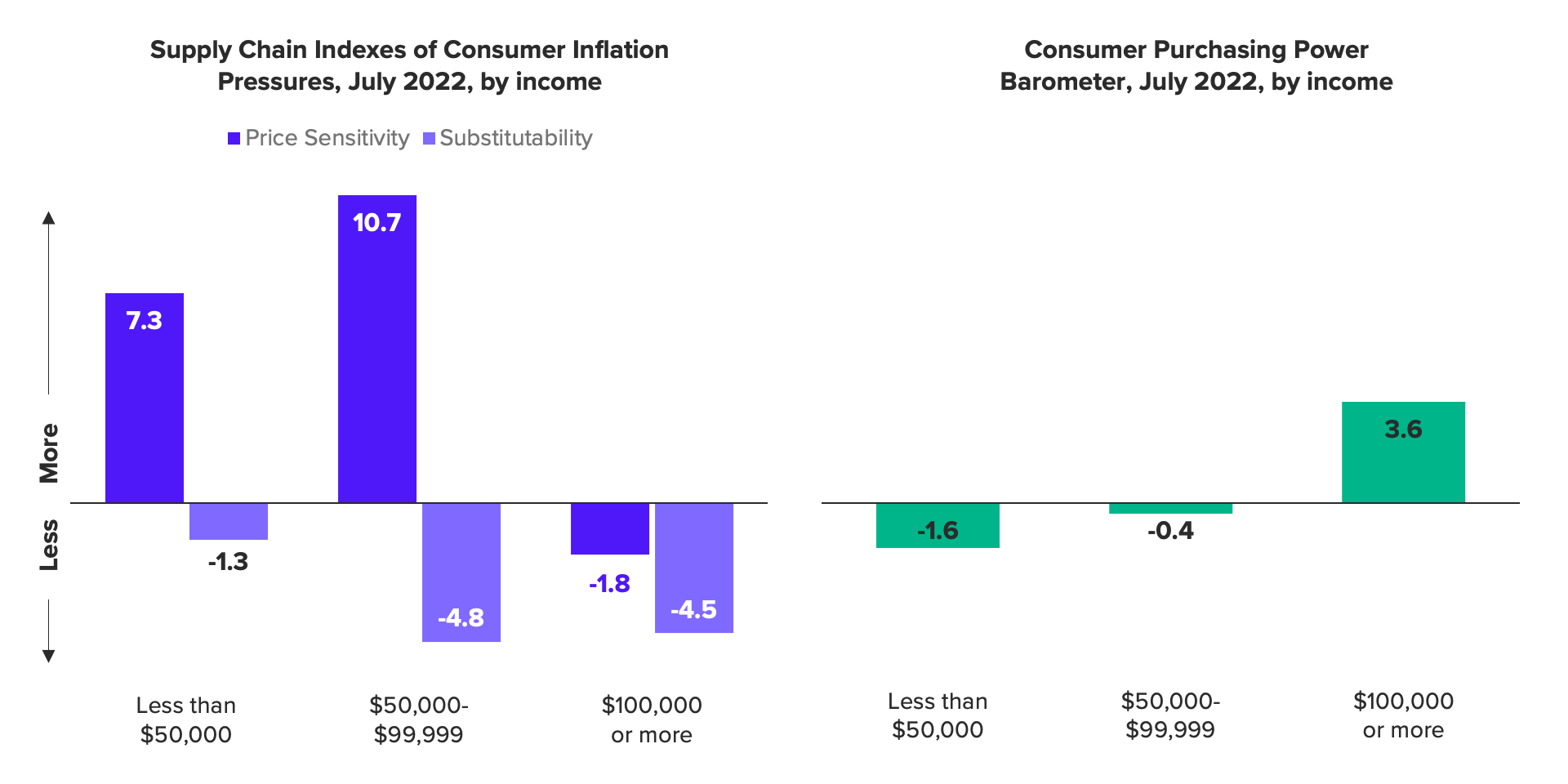 Tracking the path of the Price Sensitivity and Substitutability indexes over time relative to each other reveals both the extent and the manner in which consumers of various income groups have responded to rising prices in recent months. The figure below traces the evolution of Price Sensitivity and Substitutability scores for all U.S. adults and by income group from March through July of this year. When both rise/fall simultaneously, the value appears in the upper right/lower left quadrant of the scatter. When the behavioral responses diverge from each other, the values appear in one of the upper left or lower right quadrants. Interestingly, rarely do all of the responses look the same at the same time, revealing considerable heterogeneity by income.

Economic Intelligence
How Consumer Response to Inflation Differs by Income 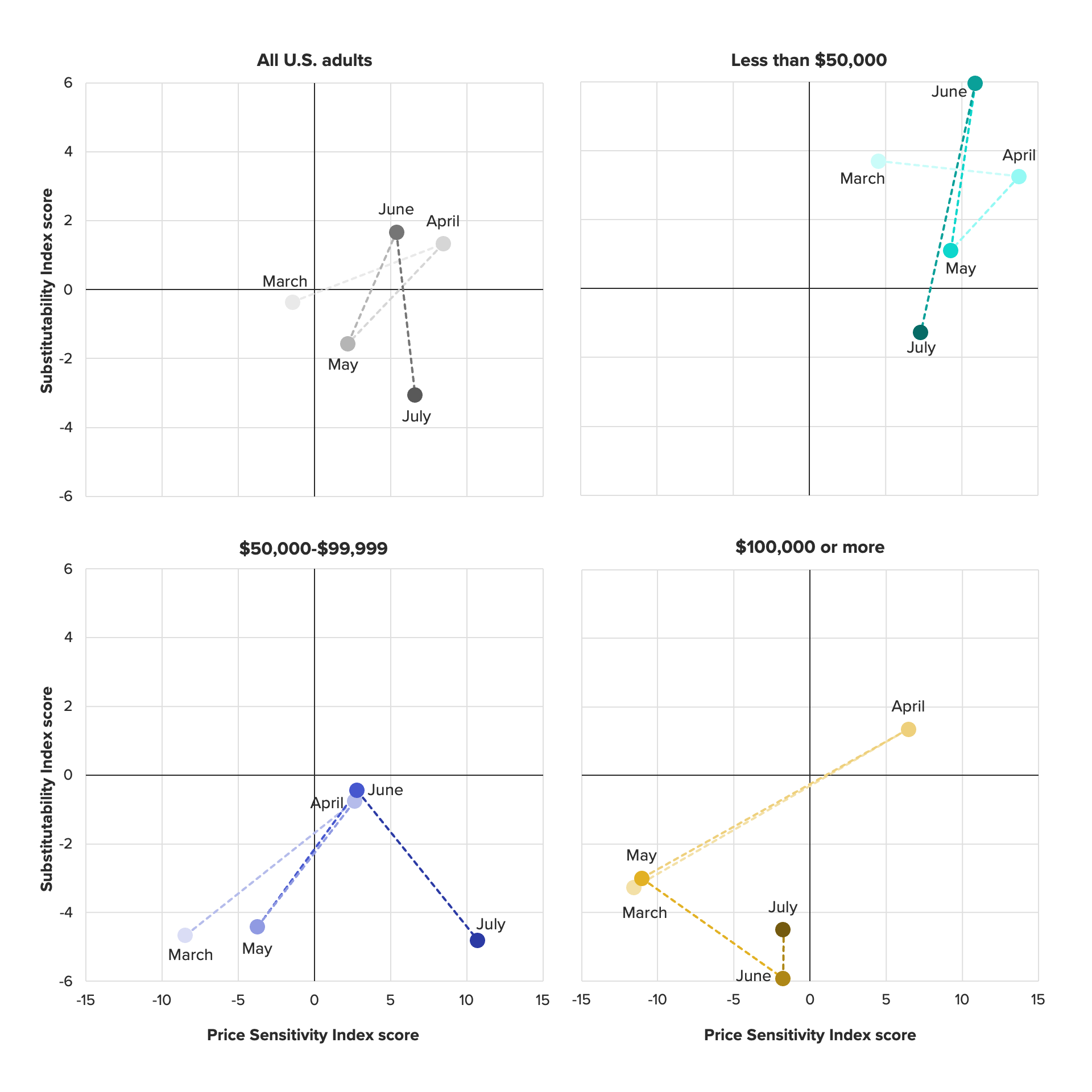 While those earning less than $50,000 per year have consistently registered more sticker shock and trading down than others since the indexes launched in March, July marked a shift for middle-income consumers, who for the first time surpassed the lowest earners as the most price-sensitive cohort.

As sticker shock jumped for this group last month, trading down also declined, a sign that for these consumers, their inflation response has progressed from an initial preference for partial cost savings by substituting cheaper goods to a higher frequency of forgoing purchases. The highest earners’ index scores, meanwhile, have remained comfortably within the lower-left quadrant in every month except April, when all income groups simultaneously reacted to the jolt of rapidly rising gas and food prices that followed the outbreak of the Ukraine war.

Purchasing power is sinking for all but the highest earners

Middle-income earners’ fortunes have shifted substantially over the recent period. When the survey launched in March, the CPPB score for members of this group was almost identical to that of the highest earners ($100,000+), with a solid lead over lower-income adults, but over the subsequent months their responses gradually drifted closer to those of their lower-earning counterparts. Meanwhile, those earning under $50,000 had improving CPPB scores in July, potentially tied to strong jobs growth in lower-wage sectors such as leisure and hospitality (improving employment outcomes tend to boost consumers’ willingness to spend). 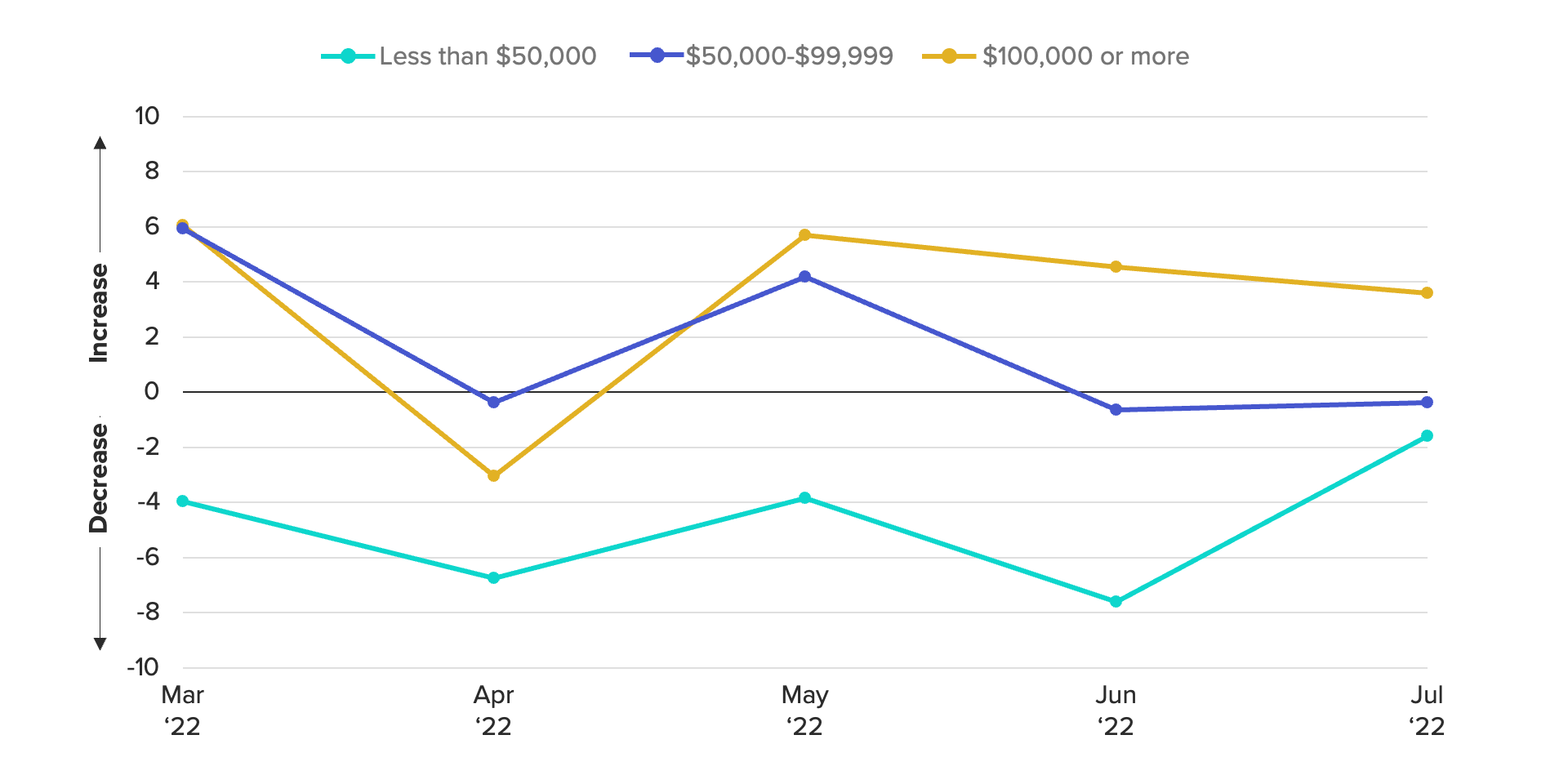 However, CPPB scores are constructed on response data drawn solely from among consumers who considered purchases of various goods and services in the past month. A precondition for sticker shock or trading down involves researching and rejecting a full price option. Consumers who were so discouraged by high prices in previous months  that they refrained from even considering a purchase in July would not be captured by the CPPB reading for that period. Several cumulative months of negative CPPB scores for the lowest earners could be whittling down the respondent pool to include a higher allocation of less price-sensitive consumers.

Reinforcing this point, the July CPPB readings for each respective income group closely mirrored year-over-year spending growth for the same month: After adjusting for inflation, both the lower- and middle-income groups posted annual declines in spending, whereas the high-income group increased July outlays compared with a year ago. 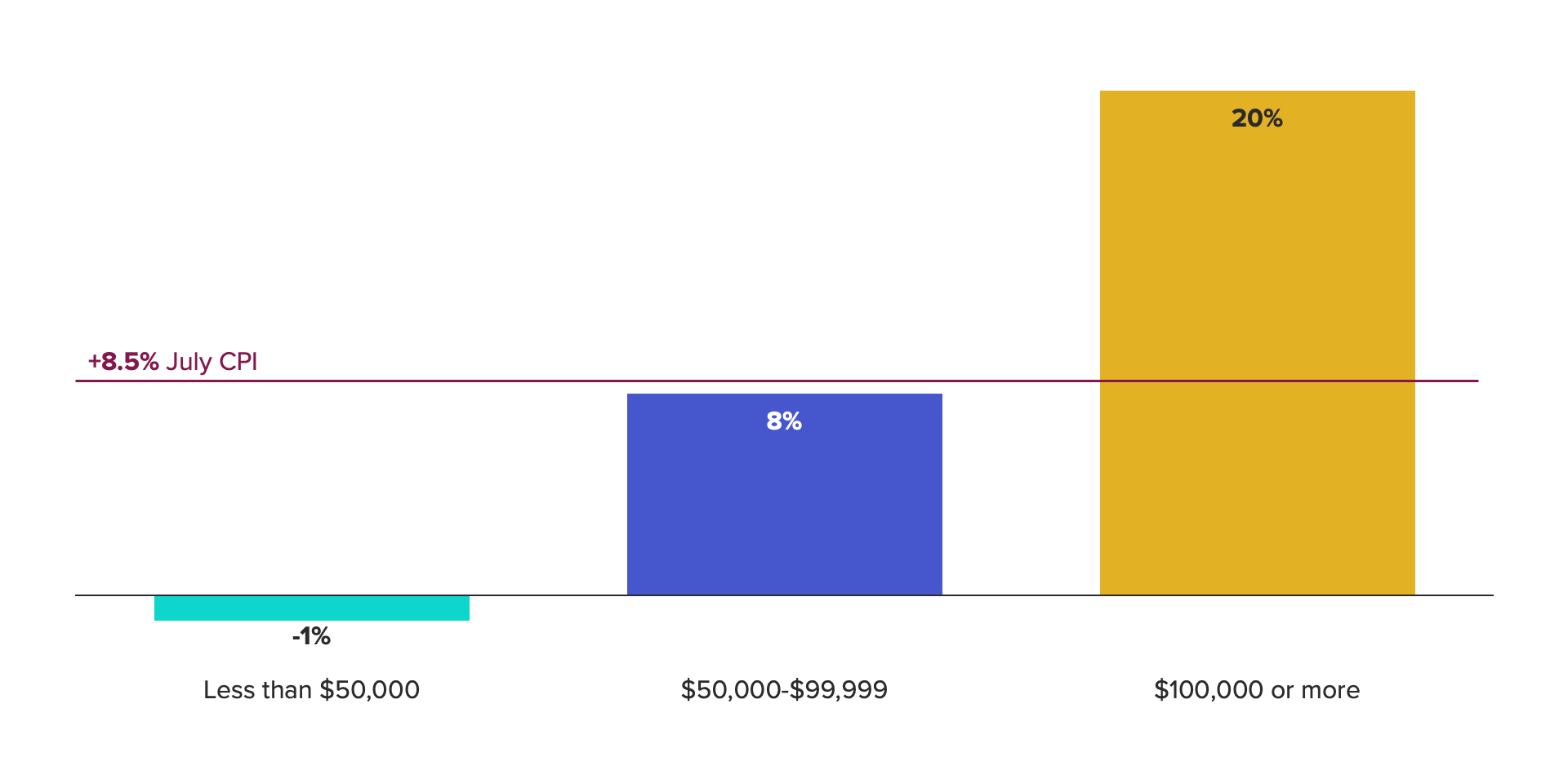 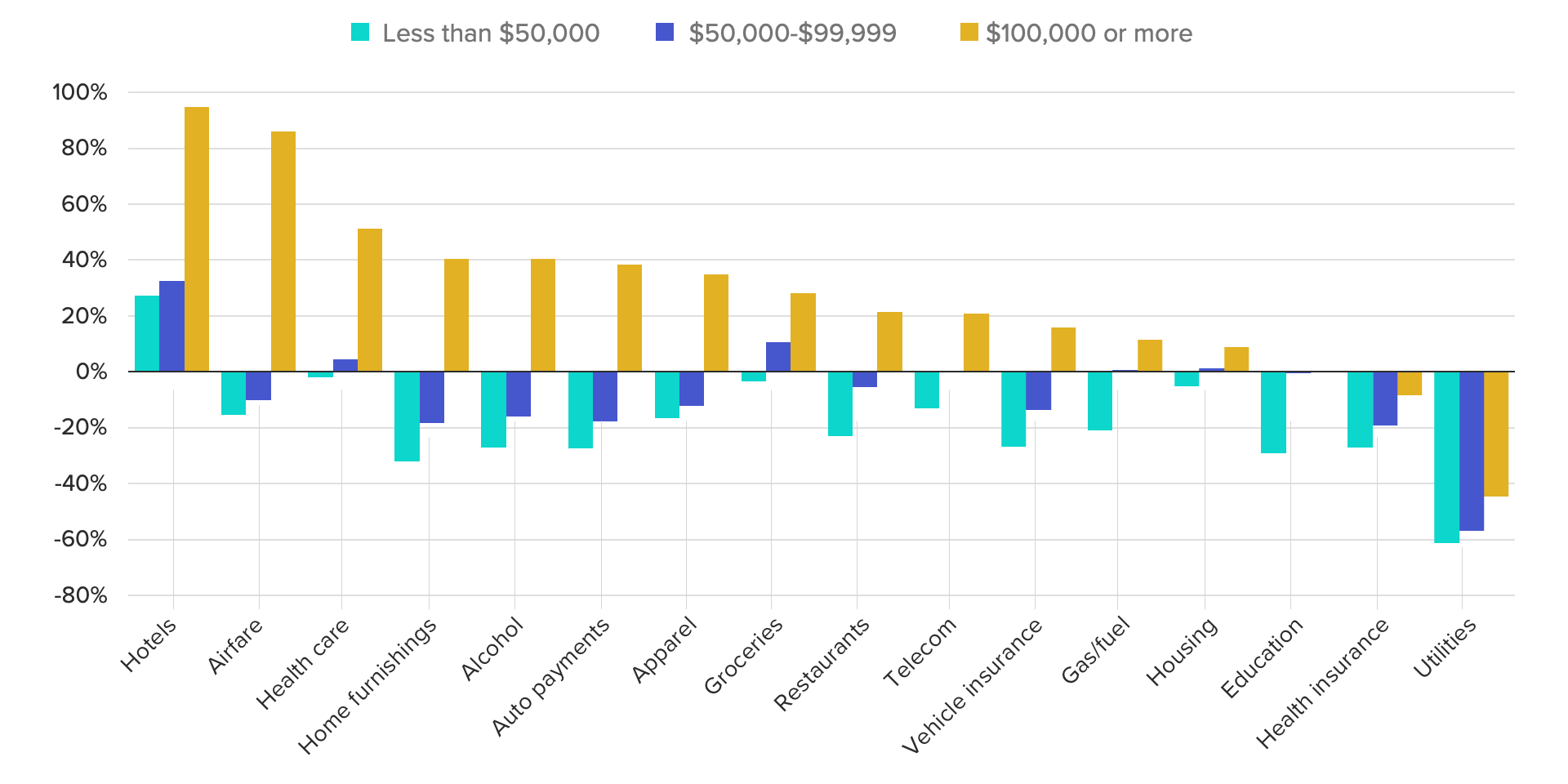 A closer look at the drivers behind spending outcomes across income groups further emphasizes the vast divide between higher and lower earners. Real spending increased year over year in nearly every category tracked for those earning $100,000 or more, with some of the largest gains occurring in discretionary spending categories such as travel, home furnishings, auto payments and apparel. The opposite was often true for adults earning less than $100,000, for whom spending declined in most of these categories. With the exception of hotel spending (supported across all adults by reduced pandemic concerns relative to last year), the only categories that eked out spending gains for lower and middle earners were household staples like groceries, health care, telecom and housing.

Clouds linger over the spending outlook

Recent developments in the CPPB across income groups highlight the possibility that the deterioration in purchasing power first registered among lower-income adults is now penetrating farther up the income ladder. Reports from middle-income earners of weakening household finances in July offer additional evidence that the bite of inflation is tightening its grip on a growing segment of the population. While spending among the highest-income group has so far remained relatively resilient, the latest CPPB numbers leave the impression that any additional impact of inflation on consumer spending will most likely come from higher-income adults, who will either start to walk away from purchases or trading down to cheaper alternatives.