Affording Child Care Is Difficult for at Least 2 in 5 Parents of Kids Younger Than 18. How They Make It Work Shows a ‘Completely Broken System’

Leaving the workforce, tapping into savings and acquiring debt are among the options some parents have done or plan to pursue to pay for care 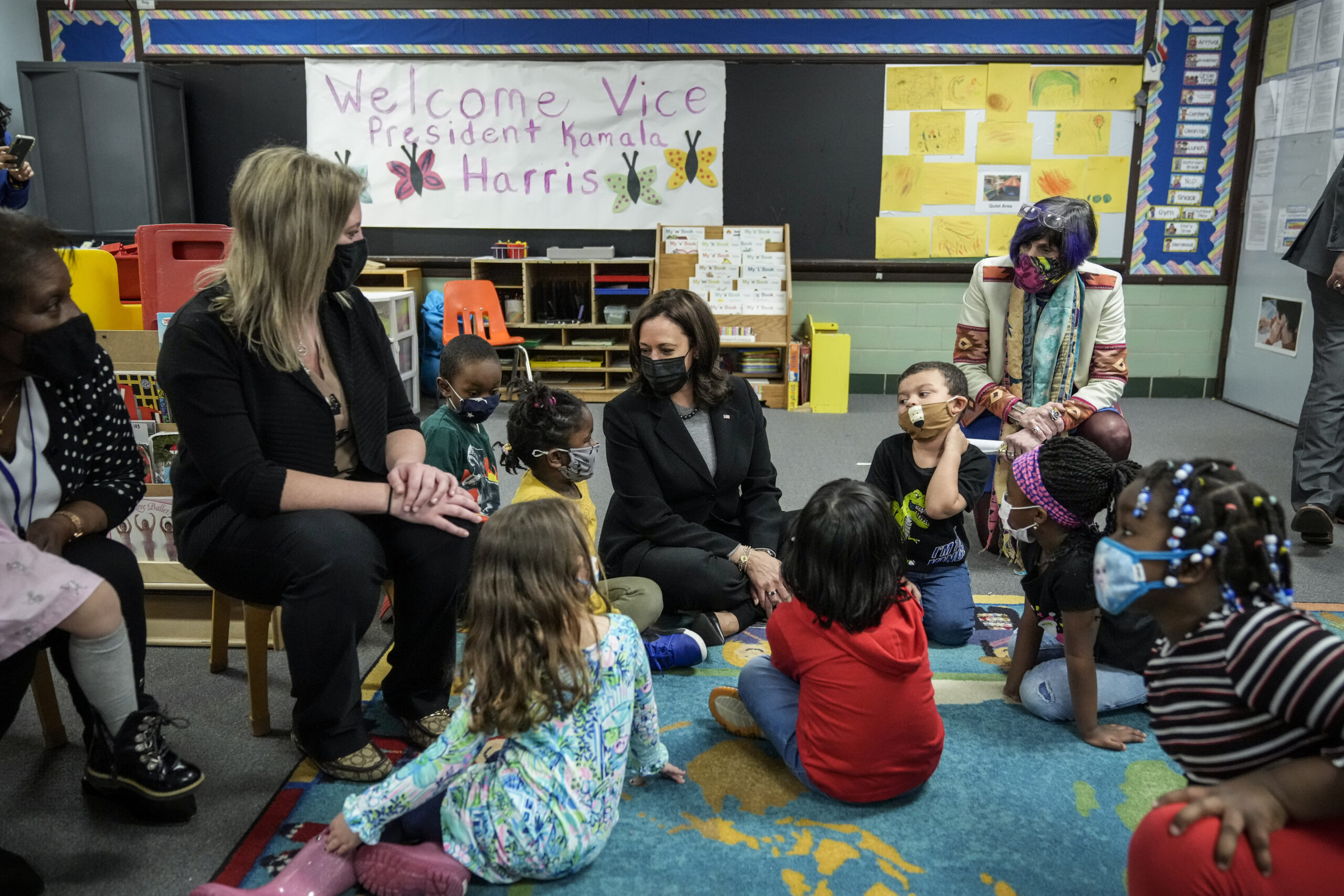 Although scorching gas prices and inflation may finally be on the downhill slope, there is one specter that continues to haunt American families’ pocketbooks: the cost of child care.

U.S. policymakers came close to moving the needle on several policies in the past year that would have helped to ease the financial burden for families, including child care subsidies, extended child tax credits, universal pre-kindergarten and ensuring paid family leave as President Joe Biden’s earlier “Build Back Better” spending plan circulated Washington.

But none of those family-friendly measures made it into the Inflation Reduction Act, which was signed into law by Biden this week.

A new Morning Consult survey indicates that the problem of exorbitant child care costs — and the clamoring for policy solutions — isn’t going anywhere: 43% of parents with children under 18, including half of women with young children and a slightly greater share of parents with household incomes under $50,000, reported difficulty affording child care.

“It’s really disheartening to see that as we’ve come through this major watershed moment in the lives of millions of people, we haven’t turned a corner on policy,” said Vicki Shabo, a senior fellow on paid leave policy at the New America think tank who previously led the National Partnership for Women & Families’ workplace policy initiatives. “And we haven’t been able to overcome the allergies that businesses have to paying higher taxes.”

2 in 5 Parents With Kids Under 18 Say It Is Difficult to Afford Child Care, Including Roughly Half of Women

“Not applicable” includes respondents who reported being parents of children younger than 18 but who do not pay for child care.
Survey conducted July 15 – 16, 2022, among a representative sample of 1,131 U.S. parents with children younger than 18, with an unweighted margin of error of +/-3 percentage points. Figures may not add up to 100% due to rounding.

The survey found that child care affordability difficulties varied slightly across regions: 50% of parents who live in the Northeast said they found it difficult to pay for care, compared to 44% in the West, 43% in the South and 34% of Midwest parents. A 2022 survey by ChildCare Aware found that in the Northeast, the average annual cost of child care per household exceeds the annual average cost of housing by $4,146, while in the Midwest, the average child care bill exceeded housing by $3,443 per year.

Additionally, while child care in large cities is notoriously scarce and high-priced, affordability issues aren’t just limited to those in urban areas: Morning Consult found that among parents of children under 18, 49% in rural communities said it is difficult to afford child care, compared with 44% in suburban areas and 37% in urban areas who said the same.

Amid the apparent stalemate in advancing federally funded solutions, some state programs and private businesses have stepped in to try and close the child care gap for their employees, especially as workers’ need for care affects business access to labor.

Private industry solutions to provide care or otherwise tackle costs for their employees is a move “in the right direction,” said Lauren Bauer, an economics fellow at the Brookings Institution and associate director of the think tank’s Hamilton Project. “But it’s not going to reach enough people or the right people to make a difference.”

A report published earlier this year by an American Enterprise Institute and Brookings working group made the case for increased federal spending on children ages 12 and younger, arguing that the costs should be funded by curbed spending on “entitlement programs that benefit upper-middle-class and affluent seniors,” including Medicare.

Shabo believes “there is no way that we ever solve these problems without public investment. I think what we’ve seen is that these are not challenges that the private sector is managing on its own, or that individuals can manage on their own.”

Cutting Back on Travel, Other Non-Necessities Is Mostly Where Parents Are Turning to Afford Child Care This Year

Respondents were asked if they have already or plan to do any of the following this year in order to afford child care: 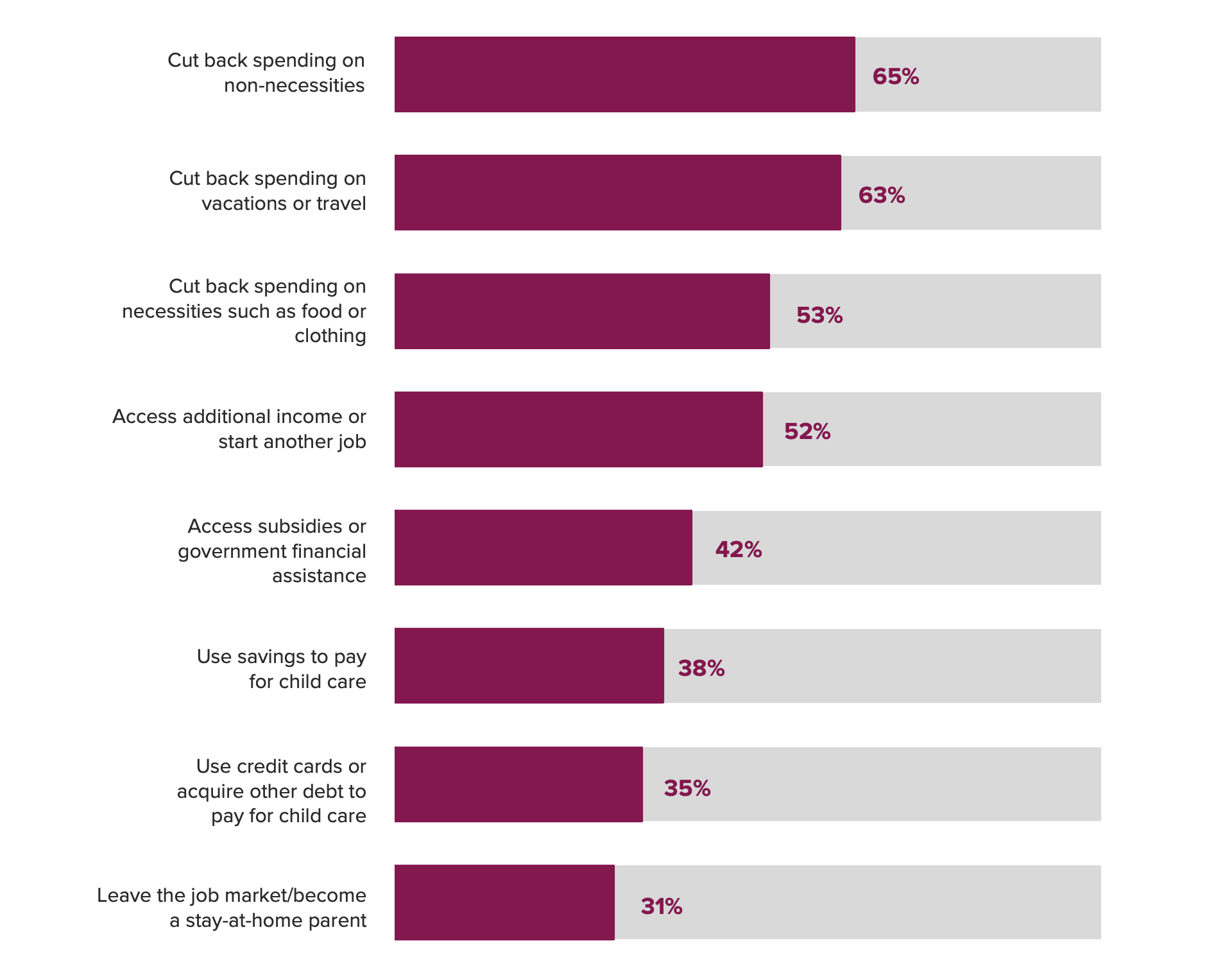 Survey conducted July 15-16, 2022, among a representative sample of 1,131 U.S. parents of children younger than 18, with an unweighted margin of error of +/-3 percentage points.

Parents consider cutting back on essential goods, tapping into debt or leaving the workforce in response to high child care costs

The willingness of parents to tap into debt doesn’t come as a surprise to Liuba Grechen Shirley, founder and chief executive of Vote Mama Foundation, a research and analysis group focused on political participation of U.S. mothers. A mother of three, Grechen Shirley experienced the quagmire of parenting while running for office, going on to become the first woman to win approval from the Federal Election Commission to use campaign funds to pay for child care.

The data on debt, Grechen Shirley said, “shows what our country is like right now for moms and for children. Child care is a completely broken system,” and she added that the cost has almost made parenthood “a luxury for the wealthy.”

Bauer, meanwhile, said the issue of using debt to pay for child care underscores the fact that affordability is a longstanding issue for younger families especially.

“It is more money than many people can either save in preparation for or expand on a monthly basis to pay for,” she said, “and this was true before the pandemic.”