In a Rapidly Evolving Industry, Banking Leaders Must Redefine ‘Underbanked’

Morning Consult’s financial services analyst Charlotte Principato breaks down the banking status of U.S. adults and argues banks must reconsider how they think of unbanked and underbanked populations if they hope to keep their primary place in consumers’ wallets 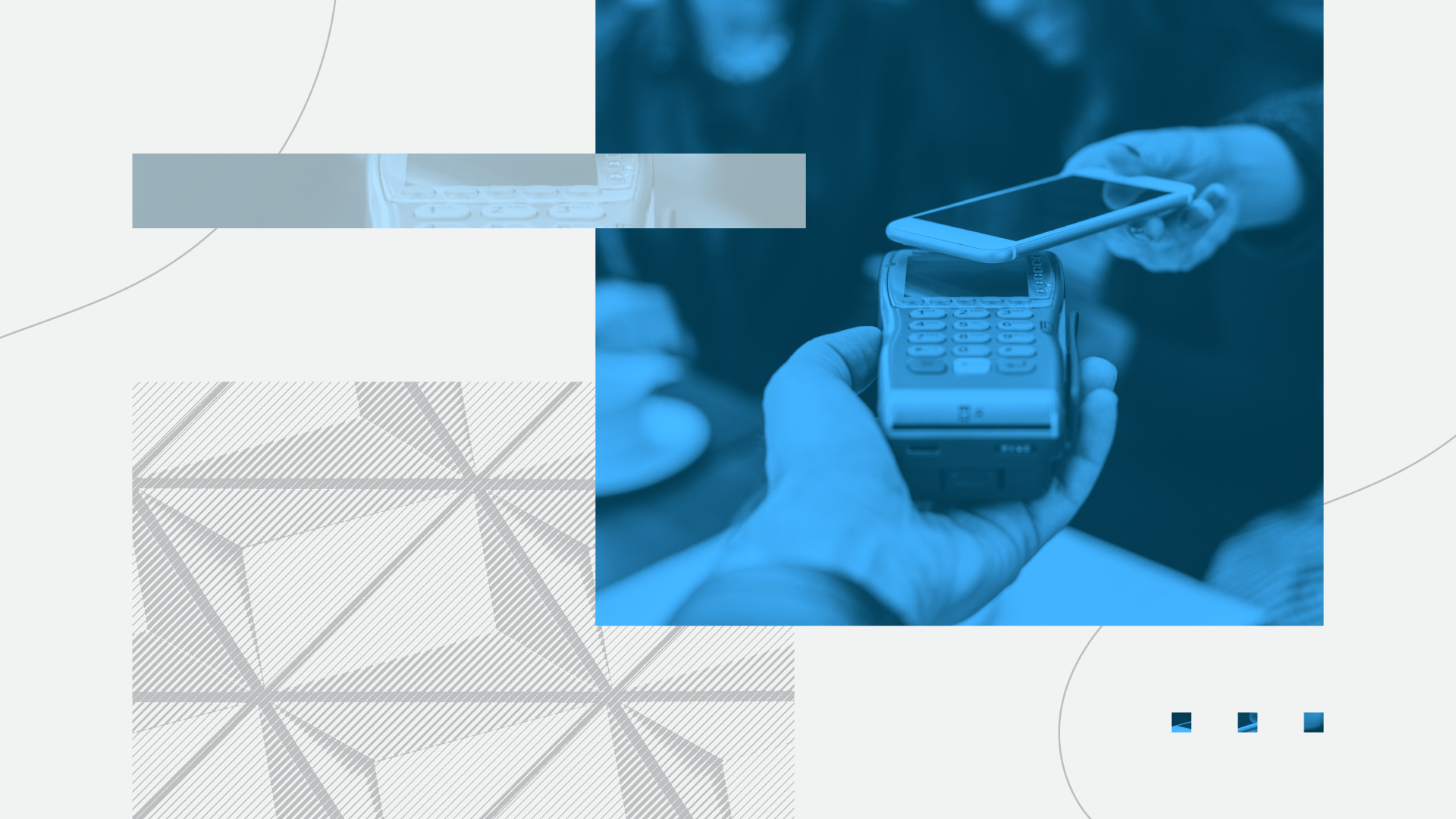 The terms “unbanked” and “underbanked” are becoming antiquated as consumers’ adoption of nonbank financial services continues to grow and fintechs continue to innovate. If banks and credit unions want to remain essential to consumers’ financial lives, they must rethink what it means to be underbanked and come up with new strategies to address gaps between their services and customers’ needs.

In the future, everyone will be underbanked.

This may sound surprising given that the shares of unbanked and underbanked adults in the United States have stayed relatively flat over the last year. But those data points don’t show the full picture.

With more nonbank providers offering new ways to make payments and move money, and the use of nonbank financial services continuing to grow, banks are becoming less central to consumers’ financial lives. These factors necessitate a more critical examination of what it means to be underbanked — and perhaps even the abandonment of the term altogether — if banks are to continue to remain their customers’ primary financial services providers.

Nearly 1 in 6 U.S. households are underbanked, roughly equal to the share who said the same last summer 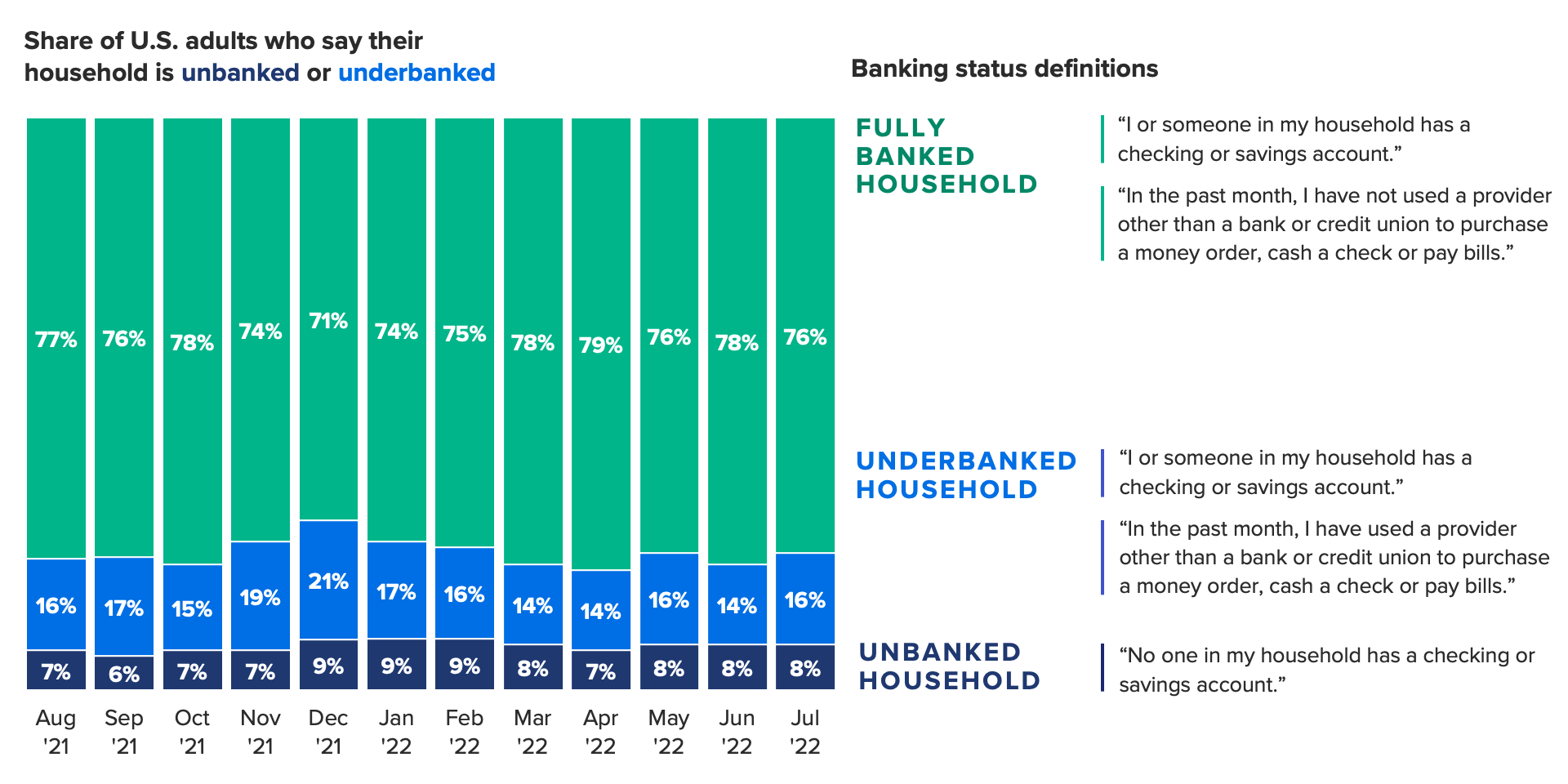 Survey conducted monthly among a representative sample of roughly 2,200 or 4,400 U.S. adults, with an unweighted margin of error of up to +/-2 percentage points. Figures may not add up to 100% due to rounding.

The long-held assumption in the financial services industry is that consumers wouldn’t choose to use services qualifying them as underbanked — cashing checks, purchasing money orders or paying bills through nonbank providers — if they had a banking relationship that provided such services. It is also widely believed that these services prey exclusively upon lower-income adults. But an examination of the demographic makeup of fully banked adults compared with underbanked adults doesn’t support this theory. 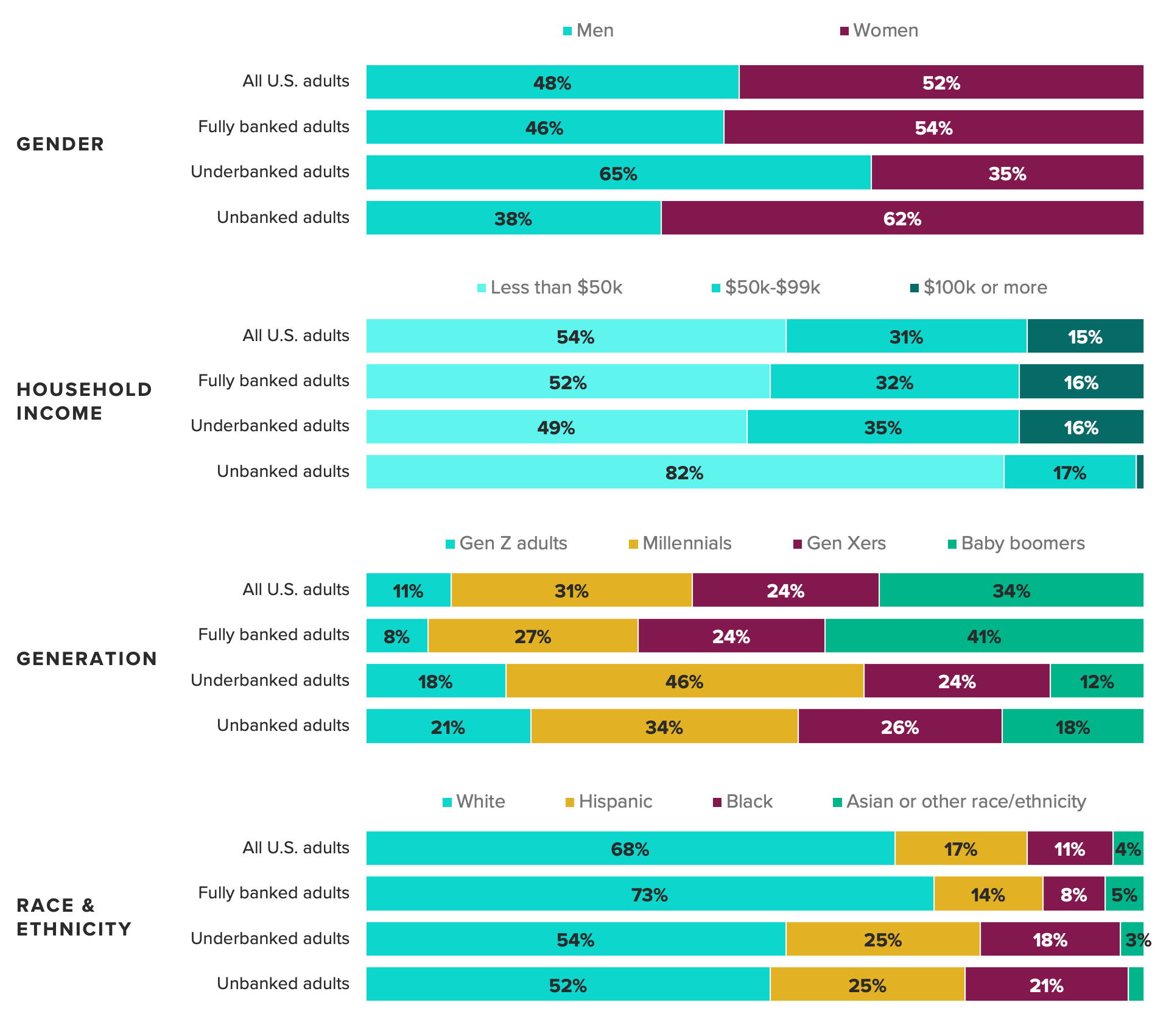 Survey conducted monthly among a representative sample of roughly 2,200 or 4,400 U.S. adults, with an unweighted margin of error of up to +/-2 percentage points. Figures may not add up to 100% due to rounding.

Across income brackets, underbanked adults are choosing to go outside of their banking relationships to access their money and move it when and how they need. Beyond the alternative financial services that define them as underbanked, these adults are more likely to use digital wallets than the general population (89% compared with 64%), to have made a purchase using “buy now, pay later” in the past year (54% compared with 26%), and to report that they or someone in their household owns cryptocurrency (45% compared with 19%).

Far from being underbanked, then, these adults are simply taking advantage of the wide array of financial services innovations that have evolved over the last decade. There’s no reason to believe that this group will shrink, either. In the future, everyone will be underbanked in some way — but by choice, relying only on alternative, nonbank service providers to manage their financial lives.

The past decade and a half has ushered in incredible innovations in payments, lending and even the nature of money in the form of peer-to-peer payments, digital wallets, BNPL services and cryptocurrency, just to name a few — all of which consumers have eagerly adopted.

Digital wallets and peer-to-peer payment apps like Venmo and Cash App have steadily grown in consumer awareness and usage since 2018, according to Morning Consult Brand Intelligence, and they show no signs of slowing. These providers are delivering a superior payment experience to that of banks, and they have achieved such scale that consumers will be reluctant to give them up. 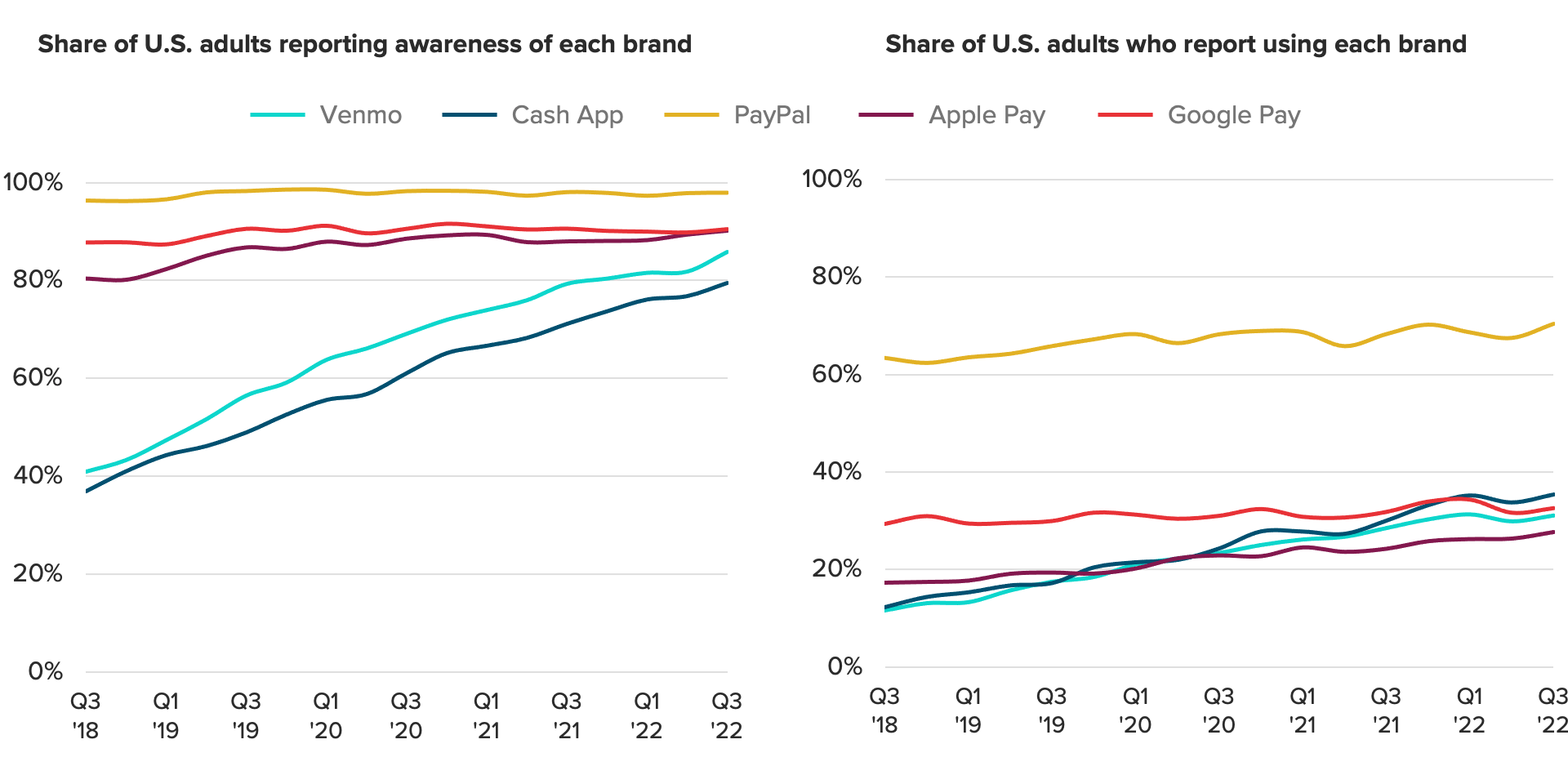 BNPL has also made its way into consumers’ wallets over the last several years as a go-to method for financing purchases: The share of adults saying they used a BNPL service at least once in the previous month has not dropped below 14% in the past year.

Adoption of cryptocurrency has recently shown signs of plateauing in the United States, but consumers are still committed to it, even if they are preparing to hibernate through a “crypto winter.” And while most crypto owners view their digital assets as more of an investment than a means of payment, a large share — 34% — say they use it to send or receive payments at least some of the time. Underbanked adults’ strong adoption of crypto is further proof that they are looking high and low for better ways to make payments and access their money.

For each of these innovations — digital wallets, peer-to-peer payment apps, BNPL services and cryptocurrency — it’s the younger generations of U.S. adults who have most eagerly adopted them, providing an insightful glimpse into the future of consumers’ financial management — one characterized by multiple providers, each fulfilling specific needs for consumers, rather than one provider to cover them all. 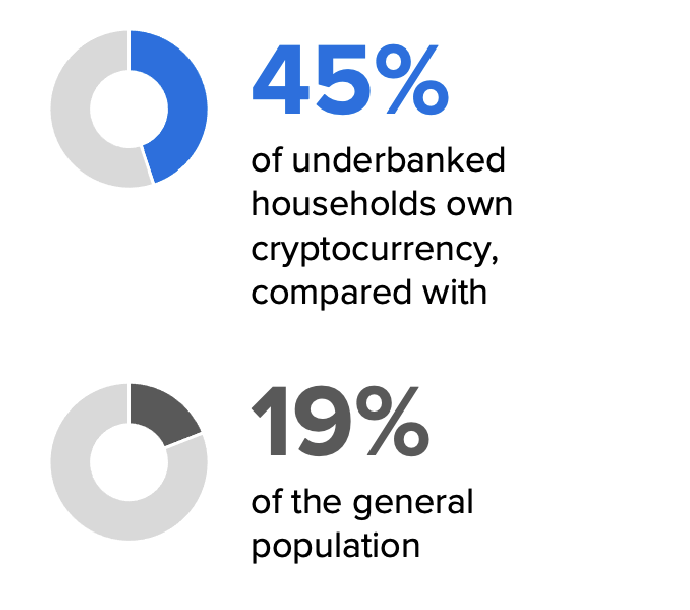 Moreover, although fintech funding, and payment services funding specifically, is down from its pandemic heights, this shouldn’t suggest fintech innovation is cooling. The billions of dollars invested in the industry over the past several years will continue to bear fruit over the coming decade. Even if current economic conditions worsen, that’s not enough of a reason to think financial innovation will stagnate; in fact, the last recession saw a boom in fintech.

In August alone, two powerful fintechs, Plaid and Wise, announced a partnership that will give Wise users access to thousands of other fintechs even if they don’t have a bank account. Government regulation is also moving, albeit slowly, toward more fintech acceptance. Just this month, the Federal Reserve released clearer guidelines for how nonbank institutions can access Federal Reserve master accounts.

With all of these nonbank financial services successfully cementing themselves in consumers’ financial lives, it’s a wonder that more U.S. adults aren’t underbanked — at least, based on the term’s commonly accepted meaning.

Being “underbanked” is all in the definition, and the current one is outdated

Consumers can manage more of their financial lives without the help of a bank than ever before, which means the term “underbanked” is rapidly becoming outmoded.

The FDIC began publishing data on unbanked and underbanked households in 2009, after the Great Recession fundamentally shook consumers’ trust in the banking sector, with the aim of maintaining public trust in the U.S. financial system. The Federal Reserve Board has been publishing a similar study on the economic stability and well-being of U.S. households since 2013. The two fiscal policy authorities’ definitions of “underbanked” differ slightly, but neither offers a comprehensive view of the nonbank financial services available to consumers.

To view underbanked adults not as underserved but as serving themselves, it’s important to break down what it means to be underbanked — and for brands to formulate their own definition that helps them better understand their customers and prospects.

If, for example, only those who have household bank accounts and occasionally use money orders were considered underbanked, then 8% of the U.S. adult population would fall under that definition. But this is obviously an incomplete picture, as there are many more alternative financial services than just money orders.

Share of U.S. adults who qualify as underbanked, depending on which alternative financial services are included in the definition 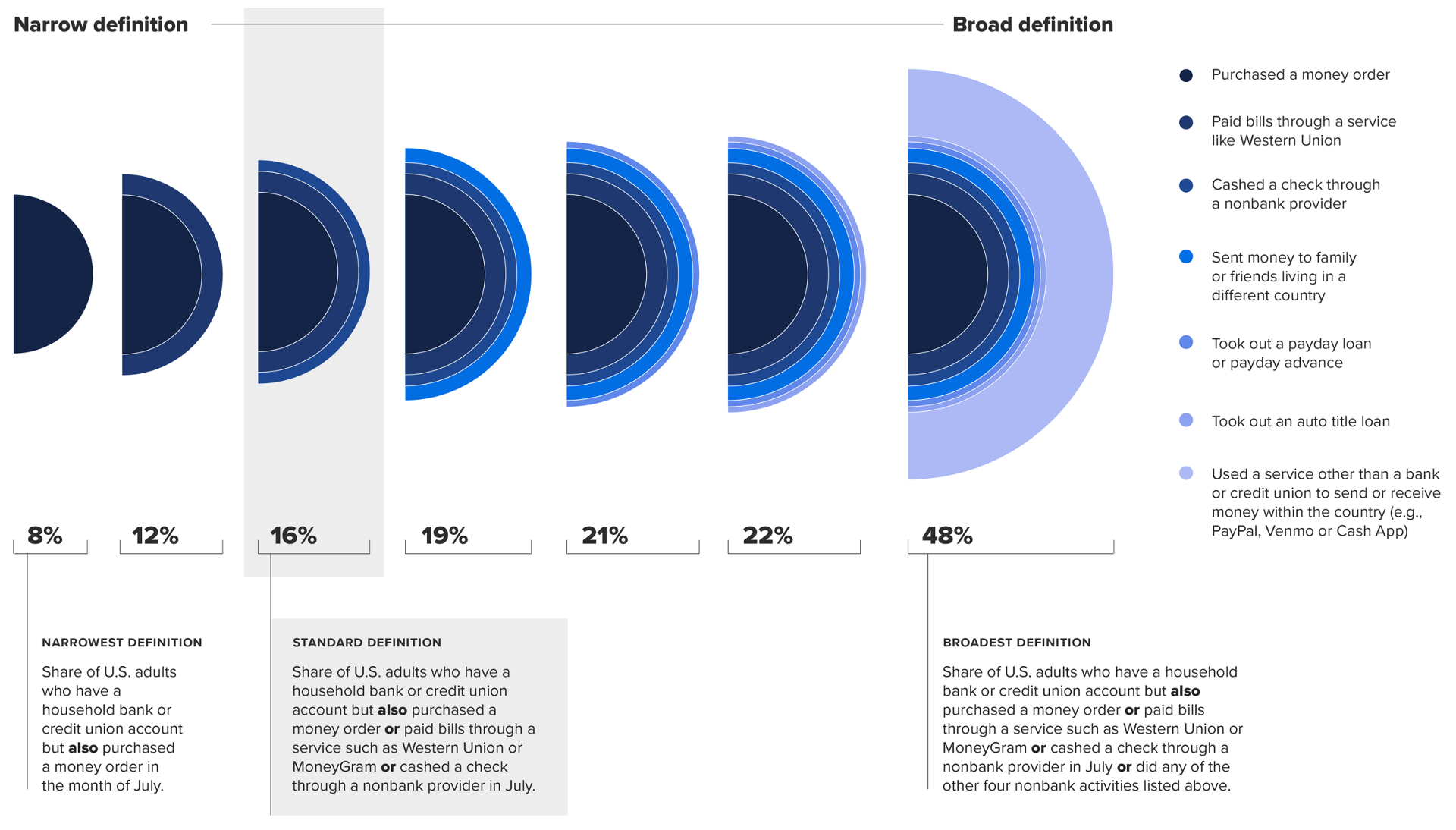 Morning Consult visualization by Sara Holcombe
Survey conducted monthly among a representative sample of roughly 2,200 or 4,400 U.S. adults, with an unweighted margin of error of up to +/-2 percentage points.

If you were to include in the definition of “underbanked” anyone with a bank or credit union account in their household who also used a money order, paid a bill through a service, cashed a check, sent money to family or friends in a different country, took out a payday loan or auto title loan, or used a peer-to-peer payment service such as PayPal or Venmo, then 48% of U.S. adults — nearly half the population — would be underbanked.

There are still other alternative financial services that even this broad definition doesn’t take into account, such as BNPL and crypto.

Regardless of whether you consider them “alternative,” these financial services and the nonbank providers that offer them are filling gaps in many consumers’ relationships with their banks, or simply providing better versions of services offered by banks. Banking leaders should be studying these gaps and attempting to bridge them if they want to remain the primary financial services provider for their customers.

Instead of terminology, banks should focus on customers’ specific needs

Rather than grouping all consumers who use alternative financial services together as underbanked, industry leaders will need to take a more nuanced approach to understanding how people manage their financial lives outside of their banking relationships.

It will be important to understand whether consumers are looking outside of their primary banking relationship to access faster payments or more affordable credit, or services that are more convenient to their lifestyle, and to segment these customers accordingly. By isolating which alternative financial services their customers use the most, banking leaders can more effectively address the shortcomings in their own services and build, buy or partner to rectify them.