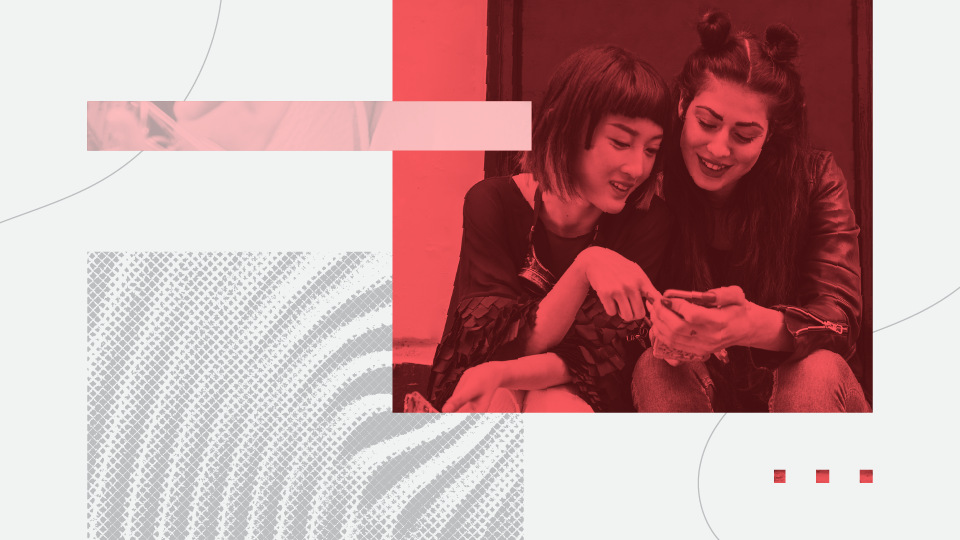 Gen Zers are less likely than their older counterparts to be aware of or have favorable views toward major news brands. There’s an opportunity for brands to win over these younger consumers by ramping up content distribution on YouTube and taking a more innovative approach with discovery through Instagram and TikTok.

The biggest news publishers have an evergreen goal to reach more younger consumers. The New York Times and The Wall Street Journal are working to address their aging bases, while The Washington Post established a task force to bring in a more youthful readership and the massive publisher podcast boom began in part because podcasts represented a relatively untapped channel for reaching younger consumers. Meanwhile, media conglomerates like Comcast and Paramount have long been working to boost news offerings on their video streaming products to soften the blow from the growing number of cord-nevers (primarily Gen Zers and millennials) who can’t access broadcast news networks on traditional TV.

But news brands may not be going far enough: New Morning Consult research shows that Gen Z adults tend to be much less aware of major news brands than the general population.

Shares of respondents who said they have never heard of the following news outlets: 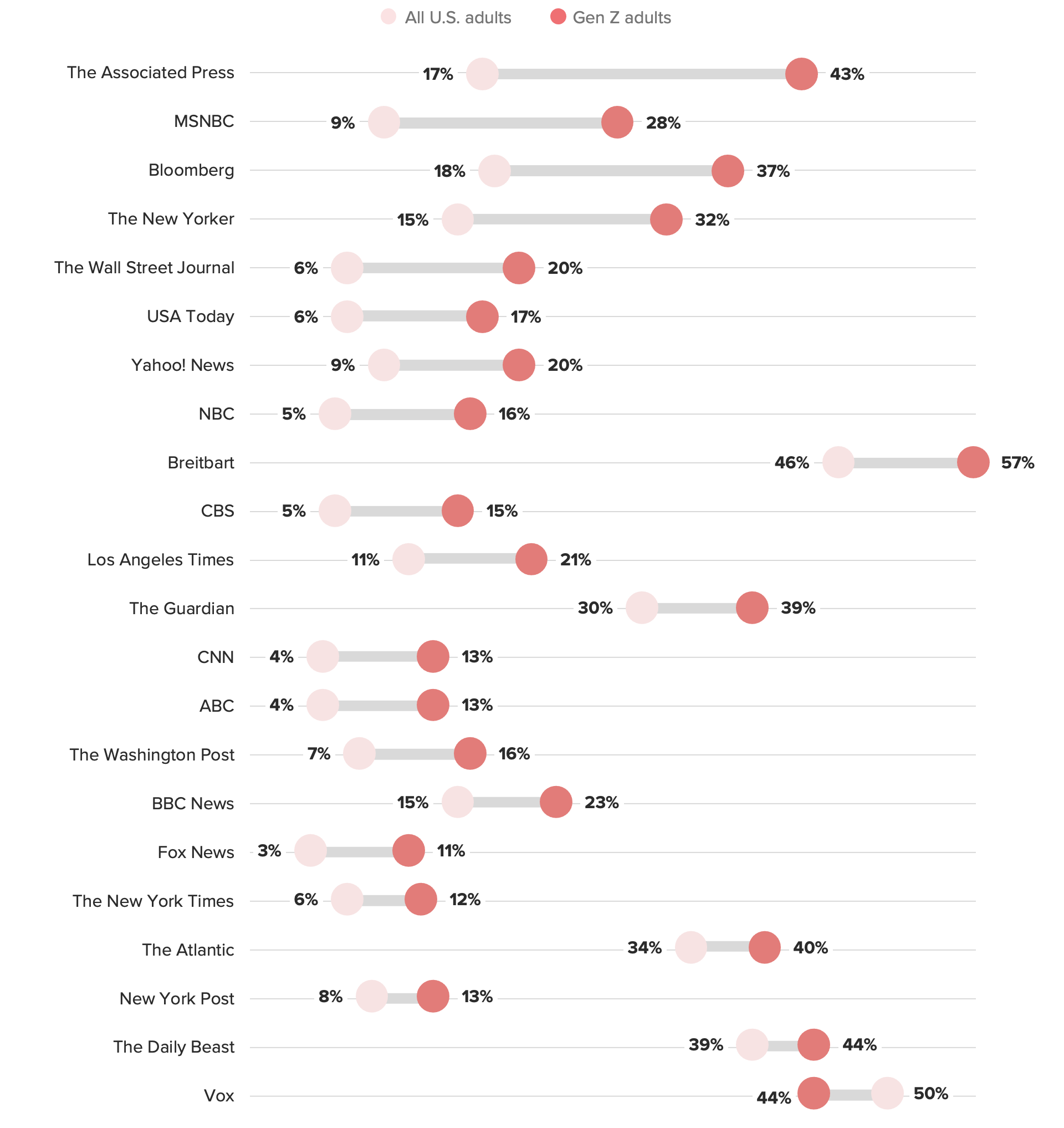 Among generational groups, Gen Z adults were the most likely to say they’ve never heard of almost any of the news brands surveyed, save for Vox and The Atlantic. The difference in awareness among U.S. adults and Gen Z adults was particularly high (a spread of at least 17 percentage points each) for The Associated Press, Bloomberg, MSNBC and The New Yorker.

While low Gen Z awareness of established news brands like Bloomberg and The New Yorker is surprising at first glance, Gen Z adults are overwhelmingly more likely to use social media than newspapers or online-only outlets for news on a daily or weekly basis. While Gen Z adults can come across established publishers on social platforms, it’s likely that many younger U.S. consumers prioritize getting their news from the influencers they follow on these networks instead.

Too many publishers right now are letting potential page view boosts from Facebook and Twitter distract them from the overall brand awareness boost they could get from content distribution on YouTube. The Google-owned platform was the third most commonly used social media service for news among Gen Z adults in July, behind Facebook and Twitter. And usage of YouTube overall remains ubiquitous among teens, while use of the other two platforms has dipped precipitously since 2015.

Since major news companies are already distributing video content on YouTube, an expanded strategy could mean taking pre-existing series and adapting them for video, like filming versions of popular podcasts in order to fully benefit from the platform’s growing prominence as a preferred podcast medium among Gen Zers.

While Spotify is Gen Z’s preferred podcast destination, YouTube is not far behind and there’s currently a gulf between publishers’ Spotify strategy and their YouTube one. For example, The New York Times’ “The Daily,” its biggest podcast and consistently one of the most downloaded U.S. podcasts in general, is found on Spotify but not on YouTube. The same distribution discrepancy can be said for others like the BBC’s “Global News Podcast” and The Washington Post’s “Post Reports.”

Shares who said the following were their preferred platforms for podcast listening:

Publishers can turn to influencer podcasts like Logan Paul’s “Impaulsive” or the Nelk Boys’ “Full Send Podcast,” which each have hundreds of millions of views on YouTube, as examples of extremely successful video podcasts that appeal to young audiences. While the tone and content of these influencer podcasts are very different from that of publishers themselves, their success helps grow the overall podcast listener base on YouTube. This means more potential YouTube podcast listeners for publishers, who could also start to see their shows recommended to a viewing audience that would otherwise never actively seek out these audio-only podcasts on platforms like Apple Podcasts or Spotify.

Plus, YouTube recently offered up to $300,000 to incentivize companies to create video versions of their podcasts — signaling the platform’s dedication to growing its podcast listening base.

News publishers also need to observe how Instagram and TikTok are supplanting Google as search engines among young users. For example, a senior Google executive said that about 40% of Gen Zers use Instagram or TikTok over Google when looking for lunch recommendations, while others are loudly sharing stories and comments regarding the Alphabet-owned search platform’s decreasing relevance as a discovery tool.

Morning Consult data also shows that TikTok and Instagram were among the top three most regularly used social platforms among Gen Z adults, so there’s a natural opportunity for publishers to ramp up ad spend on these platforms to boost visibility.

Share of Gen Z adults who said that in the past month, they had used each platform… 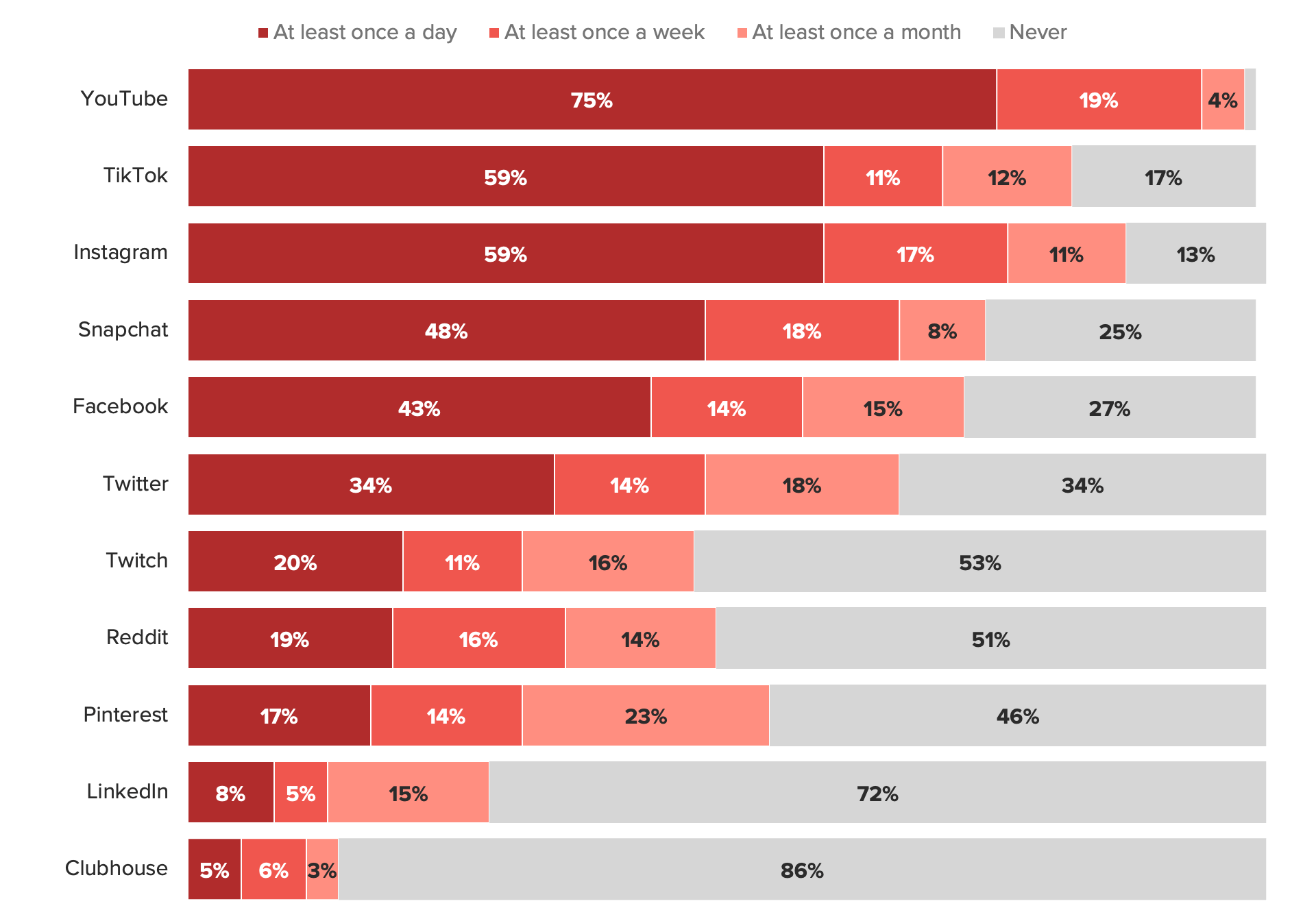 Many leading publishers should be taking TikTok more seriously than they currently do — The New York Times proper doesn’t have a TikTok account, and The Wall Street Journal has an account with zero videos. Meanwhile, Bloomberg’s verified account also has no videos at the time of publication, and neither The New Yorker nor The Associated Press has a presence on the app. It’s no wonder those news platforms have some of the biggest gaps in awareness among U.S. adults and Gen Z adults.

Further, there’s a revenue incentive for publishers: The ByteDance-owned platform recently introduced its first ad product that offers creators and publishers with at least 100,000 followers a cut of revenue that brands spend on it.

Short-form video production might not immediately pay off for publishers, but the countless TikTok copycats, even from companies such as Netflix and Reddit, show that the wind is clearly blowing in that direction — so publishers need to become proficient ASAP.