U.S. Allies Trust the American Nuclear Umbrella, Even if They Hate Nuclear Weapons

Only in Spain do more people favor building their own weapons than relying on allied arsenals, but even there it’s still well short of a majority 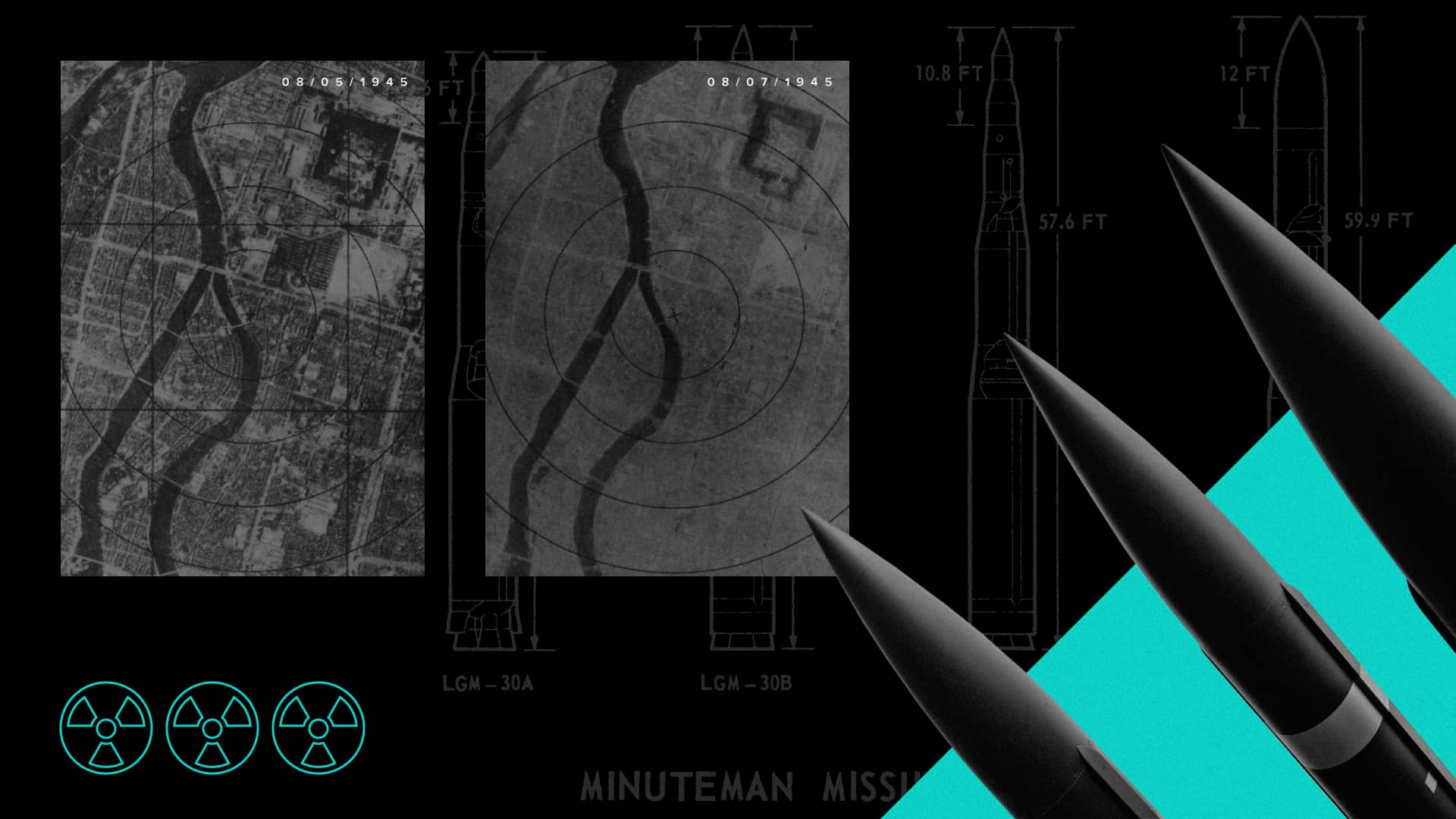 Russia’s invasion of Ukraine has led to fears that it could snowball into a nuclear confrontation between Moscow and Washington. Against this backdrop, Morning Consult surveys show that the populaces of four of America’s most important non-nuclear-armed allies prefer living under an allied nuclear umbrella rather than obtaining their own weapons, and have negative views of nuclear weapons and global proliferation.

U.S. Allies Without Their Own Nukes Don’t Think They Would Improve Safety
Only in Spain does support for acquiring nuclear weapons outstrip opposition 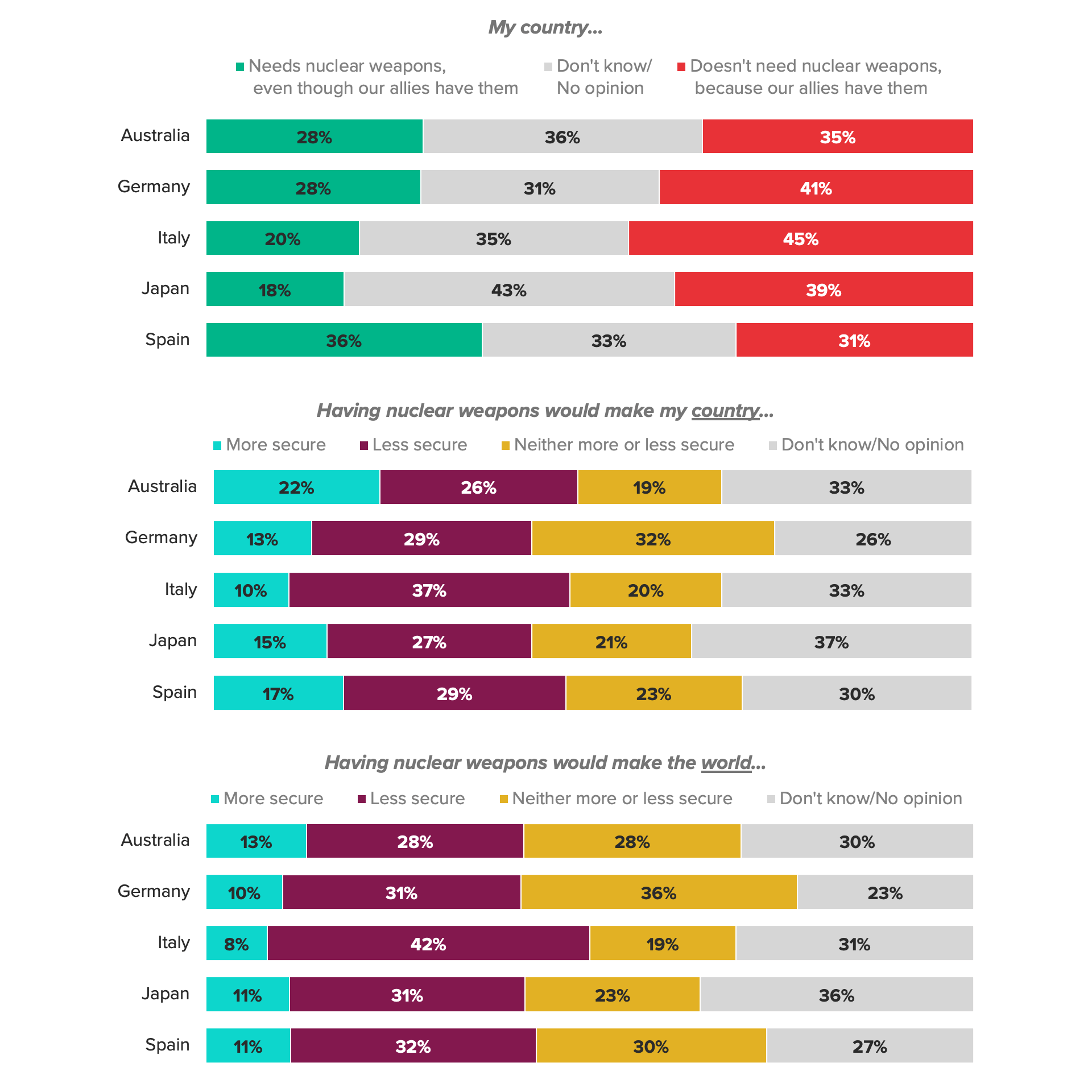 Surveys conducted August 16-17, 2022, among representative samples of 1,000 adults in each country, with unweighted margins of error of +/-3 percentage points. Figures may not add up to 100% due to rounding.

Across the globe, few think building nuclear arsenals is a good idea

Ever since the United States first unleashed the terrible power of nuclear weapons on Hiroshima and Nagasaki 77 years ago this month, America’s nuclear arsenal has undergirded its global strategic planning by extending protection to allies and deterring such foes as China and the Soviet Union through “mutually assured destruction.” Since the fall of the Iron Curtain, former Soviet bloc countries such as Poland and the Baltic states, who are under the U.S. nuclear umbrella by virtue of their NATO membership, have avoided the Russian invasions suffered by nonmembers Georgia and Ukraine, even if they are still frequently harassed by Moscow.

However, whatever security benefits American nuclear weapons provide for U.S. allies, their unimaginable destructive power and ability to permanently end or severely alter all life on Earth seems to outweigh their foreign policy utility in the global public imagination.

Major U.S. Allies Have Overwhelmingly Negative Views of Nuclear Weapons
But France and the United Kingdom, which have nuclear weapons, are more likely to see the upside 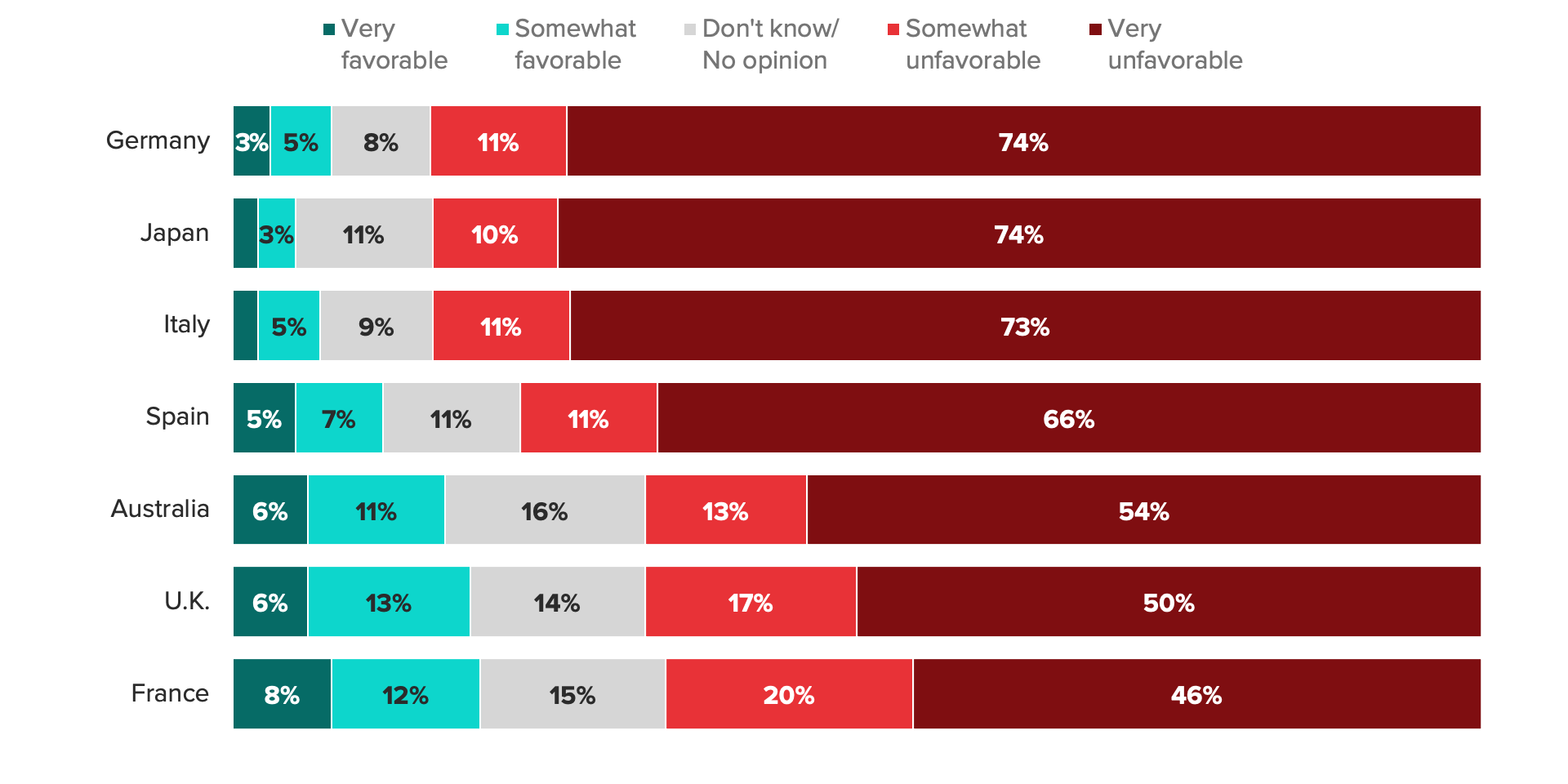 The data from Spain is particularly notable, given historic context. Spain formerly both hosted U.S. nuclear weapons on its soil and funded a weapons development program, but booted the American bombs and ditched the program prior to its 1982 accession to NATO. Ever since, Spain has refused to host nuclear weapons as a condition of its membership in NATO, a policy reaffirmed by a 1986 popular referendum, and Spain is generally thought to be one of NATO’s most nuclear-skeptical countries.

But contrary to common perception, Morning Consult data not only shows that Spaniards are more interested than their peers in other non-nuclear-armed U.S. allies in building nuclear weapons, they are less averse to them than adults in Germany, Italy or Japan.

Surveys conducted July 12-16, 2022, in the United Kingdom and Aug. 16-17, 2022, in remaining countries, among representative samples of 1,000 adults in each country, with unweighted margins of error of plus or minus 3 percentage points.