Democrats Are Outpacing Biden’s Standing Ahead of the Midterms. Will It Last? 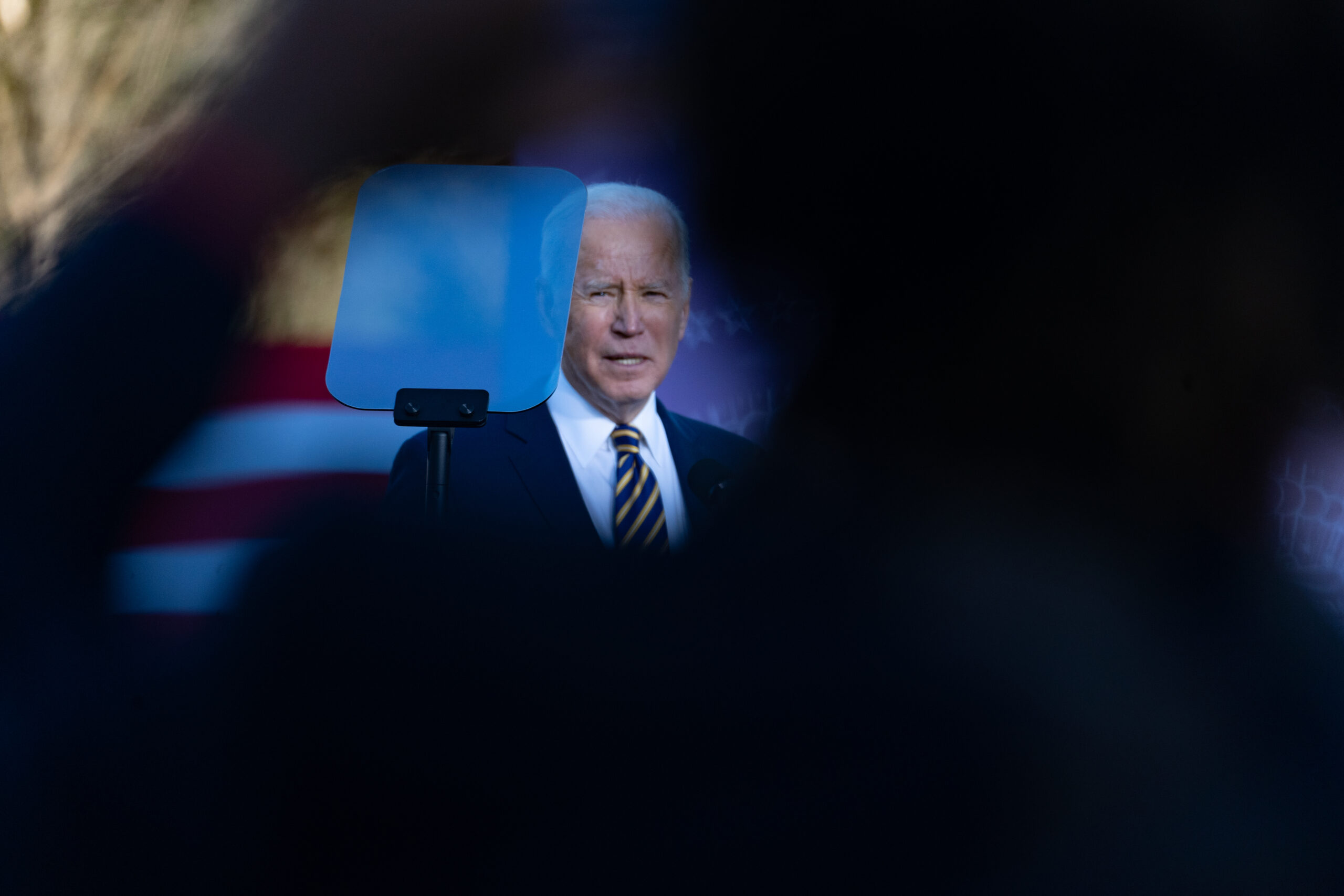 President Joe Biden is still unpopular despite recent improvements in his job approval rating, setting up what might appear on its face to be a rough year for Democrats fighting to control the House and Senate.

But unlike the congressional majorities under Biden’s two immediate predecessors, this time, Democrats are overperforming their standard-bearer’s popularity on the generic ballot ahead of his first midterm election, according to Morning Consult Political Intelligence tracking.

It may position them at this unofficial start of the fall campaign to curtail their expected losses, but by how much is still an open — and massively consequential — question.

According to the latest survey of registered voters, Democrats in Congress hold a 4-percentage-point advantage over their Republican counterparts in a generic ballot test, while Biden’s job approval rating is 13 points underwater. That disparity in sentiment about the Democratic president’s job performance and voters’ slight preference for Democratic congressional candidates has persisted ever since Biden’s numbers tanked last August in the fallout of the American withdrawal from Afghanistan as inflation and COVID-19 cases surged.

*Net approval is the share of voters who approve minus the share who disapprove.
Data points reflect 3-day moving averages in 2021 and 2022 of representative samples of at least 7,973 registered U.S. voters, with unweighted margins of error of +/-1 percentage point. “Don’t know/No opinion” responses are not shown.

Throughout much of this year, even as Biden’s approval rating reached its nadir this summer amid rising inflation due in large part to soaring consumer fuel costs, Democrats maintained or expanded their generic ballot advantage. In recent weeks, the tracking surveys have shown the gap between the two figures closing a bit. But that confluence hasn’t followed typical historical trends: Rather than the Democrats’ advantage over Republicans shrinking, Biden’s image has improved among voters.

That phenomenon stands in contrast to the circumstances faced by Biden’s two immediate predecessors, whose parties went on to sustain major losses in the midterm election after they first took office.

Related: Biden’s Approval Rating Is on the Rise

At this point in 2010, for example, the RealClearPolitics average showed President Barack Obama’s poor job approval rating was slightly better than his congressional counterparts’ poor standing in the generic ballot — though Republican strategists have long pointed to sentiment about House Speaker Nancy Pelosi (D-Calif.) as a strong driver that year.

In 2018, Surveys Showed Trump’s and Congressional Republicans’ Fates Were Tied

*Net approval is the share of voters who approve minus the share who disapprove.
Data points reflect monthly averages of surveys conducted in 2017 and 2018 among representative samples of roughly 2,000 registered U.S. voters each, with unweighted margins of error of +/-2 percentage points. “Don’t know/No opinion” responses are not shown.

What explains the differences between those previous midterm cycles could say a lot about the range of potential outcomes in November, from a Republican sweep of both chambers to a shock hold by Democrats or somewhere in the middle, where Republicans win the House but Democrats keep the Senate.

Why Democrats may be outperforming Biden

Democratic strategist Jesse Ferguson said recent events are helping Democrats achieve a party in power’s omnipresent goal: making the midterms a choice between two parties rather than a referendum on the top dogs in Washington.

There is Trump’s re-emergence as a central character in the news, initially cheered on by Republicans even after the Federal Bureau of Investigation’s Mar-a-Lago search for classified documents. There’s also the enactment of the Republican Party’s long-standing goal, via the Supreme Court, of overturning the nationwide right to an abortion that had been the law of the land since the Roe v. Wade ruling of 1973.

When it comes to Trump, even without his legal troubles, Republicans have elevated candidates endorsed by the former president in key Senate races in Arizona, Georgia, Pennsylvania and Ohio, the latter of which has seen the party up its spending in an otherwise red state to the initial detriment of other contests. On the House map, Democrats have in some cases controversially helped to prop up candidates — sometimes Trump-backed — they view as too extreme for a general electorate, attempting to revive the anti-Trump sentiment that fueled 2018 wins.

On the policy front, the Supreme Court’s action on abortion has proved to be particularly motivating for Democratic voters at a time when the party’s energy was depressed, and it has also appeared to bring independent voters closer to their side.

“If Democrats outperform expectations and people have to write it, people will anchor that story in the first moment of it as Roe,” Ferguson said.

All of this has been followed by a string of Democratic victories in recent months on voters’ top concern, the economy.

Beyond the early Biden-era victories on legislation to provide financial relief from the COVID-19 pandemic and improve America’s infrastructure, the summer has brought the Senate’s confirmation of Ketanji Brown Jackson to the Supreme Court, new policies to take on China, student loan relief and the Democratic Party’s landmark climate and health care package — likely Biden’s final legislative package before the midterms — all issues ripe for placement in campaign ads this fall.

Voters have already begun to notice: An Aug. 25-27 survey found 41% of voters — including 69% of Democrats and 31% of independents — said Biden has been keeping the promises he made during his 2020 campaign, the highest number captured in weekly surveys conducted since January and up from a 30% low point reached in June

Ahead of Midterms, More Voters Believe Biden’s Delivering on Promises

Surveys conducted throughout 2022, among representative samples of roughly 2,000 registered voters each, with unweighted margins of error of +/-2 percentage points.

Ferguson, a former Democratic Congressional Campaign Committee official, said the Inflation Reduction Act in particular puts Democrats “on the right side of the economy and lowering costs,” which pairs well with improvements in real-world economic indicators, such as softening pain at the gas pump, which appears to have boosted the president, especially among independents, despite the GOP’s continued advantage on the economy.

“Each one of those things,” he said — the GOP’s posture toward Trump and Biden’s legislative and economic success, as well as the abortion ruling — “helps puts the focus on them. What’s basically happened in the last six months is that the lamp has turned on them and they cannot withstand the focus.”

What can change between now and Election Day

If a lamp aimed at the Republican Party is currently working to the Democrats’ advantage, GOP groups supporting their party’s efforts to take back the House have booked what is expected to be a record sum of advertising in a wide swath of congressional districts to try to turn it back toward the party in power.

Guy Harrison, who worked as the executive director of the National Republican Congressional Committee from 2009 to 2012, said Democratic candidates in a range of congressional districts — from newly drawn swing seats to enclaves where Biden beat Trump in 2020 — are about to be strapped with a “concrete life preserver” in the form of negative ads.

If Pelosi was the albatross when Harrison led the GOP effort to retake the House in 2010, or Trump’s toxicity sunk the GOP’s House majority four years ago, the veteran Republican strategist believes Biden’s tarnished image is most certainly the drag now, and his message is simple: Nearly every House Democrat (sans vulnerable Rep. Jared Golden of Maine) has voted with Biden more than 90% of the time, per a FiveThirtyEight tally — and many of them have been with him 100%.

While Biden may not have proven an effective foil in the past, Harrison said voters now view Biden less favorably, and as more of an extreme ideologue. The make-or-break test for his thesis — and the Democratic hope that Biden’s wins will boost his party’s ship — is what plays out over the next three months with the 1 in 10 voters who remain undecided about whom to vote for this fall.

Ferguson said he’s advised campaigns in the past to review the groups who are undecided when considering generic ballot tests, where no candidate names are shown, to pinpoint the kind of voters who make up the bloc. This year, that group is largely made up of young people (often viewed as Democratic-leaning but hard to turn out in nonpresidential election years, except one), and especially young independents and independent women.

“If they are people who are undecided in the generic ballot but love Donald Trump, well then they ain’t voting for the Democrat,” he said. “If they’re undecided but younger and just not familiar enough to decide, that might be a path for us to get there.”

But even with these groups, the data shows a wide gap between sentiment about Biden and the Democratic generic ballot: The Democratic advantage on the generic ballot is 25 points better than Biden’s net approval rating among voters ages 18-34; there’s a 30-point spread between the two figures among independents.

“Some of these guys think they’re going to win with Biden 10 points behind them. It’s not going to work,” Harrison said. “Having gone through 2018, there’s only so far you can swim above water.”