Inside the Well-Funded Fight Over the Fantasy Football Consumer

ESPN and DraftKings are the two most popular fantasy sports platforms, according to a new Morning Consult survey 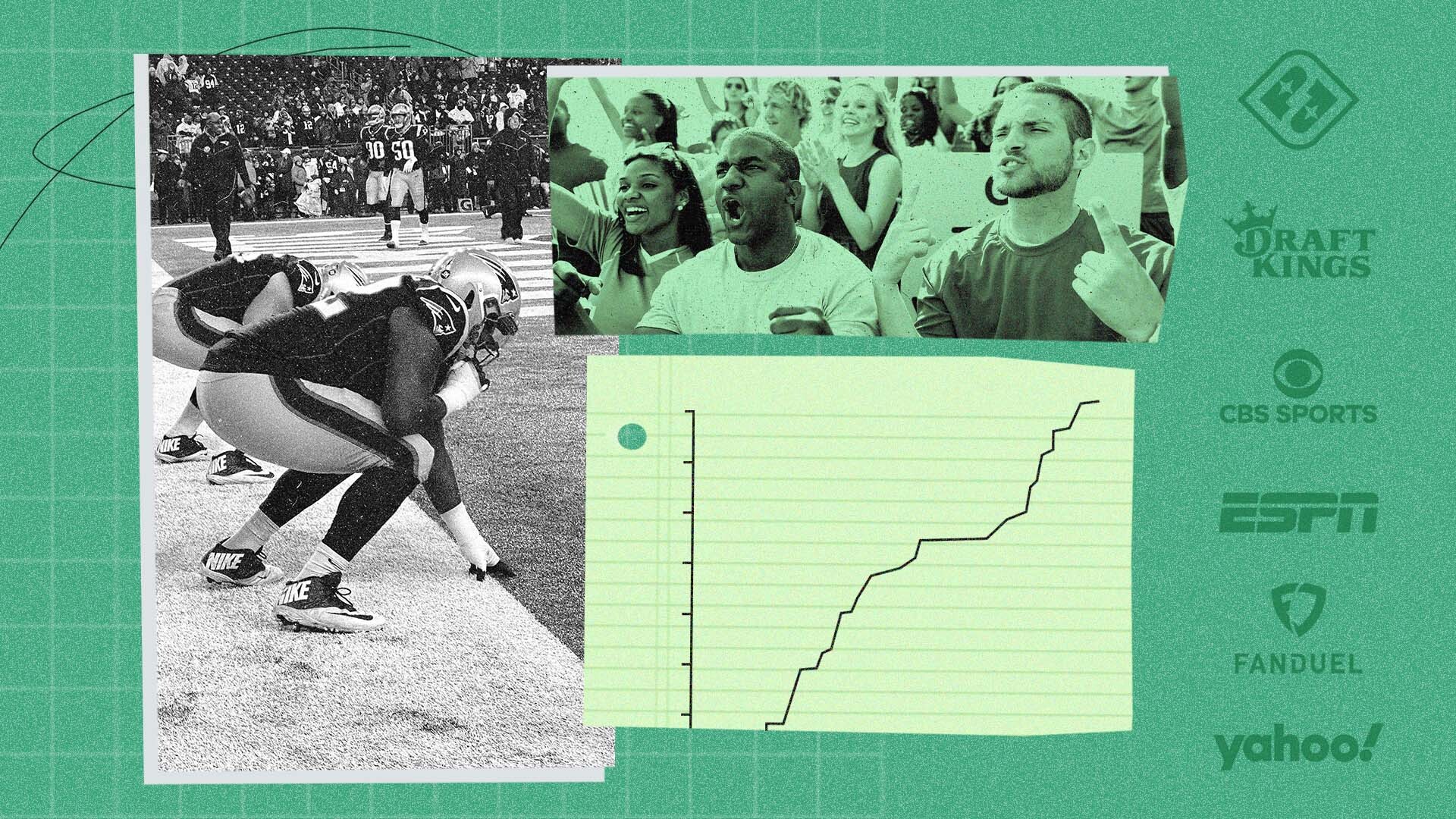 More than 3 in 5 fantasy sports players who participated in fantasy football in the past year (65%) said they use ESPN, followed by DraftKings Inc. (55%), according to new Morning Consult data. (Unsplash / Morning Consult artwork by Anna Davis)
By Mark J. Burns

For Peter Schoenke, one of the pioneers of fantasy sports, the industry today doesn’t much resemble what it was in the 1990s — neither in size nor in reputation.

“When I started, it was like talking to somebody about the Civil War, or some prehistoric times,” said Schoenke, whose outlet, RotoWire, became the first fantasy publication to offer paywalled content in October 2001. “It was like this geeky, ‘Star Trek’ thing.”

Major U.S. professional sports leagues were uneasy about venturing into the fantasy sports space, fearing it was too similar to traditional sports gambling, then a major taboo. Legacy media companies exuded that same apprehension, he said, preventing the industry from expanding much beyond its humble origins.

Fast-forward 20 years, and fantasy sports have been radically transformed, Schoenke said. Leagues fully embrace it. Media giants like Walt Disney Co.’s ESPN and NBCUniversal count on it for revenue and viewer growth. Technological advances, legal changes (sports betting is now permitted in many U.S. states) and a more informed, interested consumer base have all turned fantasy sports from a nerdy hobby into a multibillion-dollar global industry, according to Schoenke, industry executives and other experts who spoke with Morning Consult.

“Fantasy football is king,” said Mitesh Mehta, senior vice president of betting and gaming at NBC Sports Next, a subdivision of NBC Sports Group. “It’s 1A, B and C.”

But with the industry’s growth comes disruption. Older platforms and publications must now compete with a surge of well-funded upstarts, new apps and a swarm of players who fashion themselves as fantasy experts, giving out advice — often for free — on Twitter and TikTok. The industry is likely headed for yet another radical transformation.

ESPN may have gradually sunsetted its famous “Worldwide Leader in Sports” tagline, but one new moniker the company can still claim is fantasy sports leader, according to the new Morning Consult survey.

More than 3 in 5 fantasy sports players who participated in football in the past year (65%) said they use ESPN, followed by DraftKings Inc. (55%) and Yahoo and NFL.com (each tied in third at 50%).

Fantasy football players were asked whether or not they use the following platforms:

Survey conducted Aug. 16-17, 2022, among a representative sample of 532 U.S. adults who said they have participated in fantasy football in the past year, with an unweighted margin of error of +/-4 percentage points.

Brian Marshall, vice president of sports products and strategy for Disney media and entertainment distribution, said ESPN’s fantasy football business is “on pace to significantly surpass” an all-time record for players set in 2021, though he didn’t disclose specific figures.

In ESPN’s nearly three decades in the fantasy football business, Marshall said the most pronounced change has been the migration from desktop to mobile applications. Over 85% of time spent playing ESPN fantasy football is via the ESPN fantasy app, which “impacts every product design and engineering decision we make,” he said. Despite the change in users’ behaviors, nearly half of ESPN fantasy football players still conduct their drafts on desktop, though the shift toward mobile increases each year.

FanDuel Group’s Aaron Champagne, general manager of DFS, Free to Play, said the platform is mobile-first for daily fantasy sports, a subset of the industry in which users build teams over short periods of time, as opposed to the more traditional season-long leagues.

Champagne doesn’t view the legacy fantasy sports operators and publishers as direct competitors but rather “complementary” entities because of the different offerings, specifically season-long fantasy versus daily. When asked if FanDuel has taken any lessons from the legacy fantasy brands and integrated them into its own products, Champagne said they allow fantasy football players to compete with friends.

“That’s where we continue to learn from them,” he said, “and bring people together to make the sports watching experience even more enjoyable.” The company now offers friends challenges and private contests to recreate a communal experience with friends.

Greg Karamitis, senior vice president of product management at DraftKings, said the company, which launched in 2012 and is FanDuel’s chief rival in the DFS space, monitors the competition, but “will innovate where we think there is untapped demand.”

One new product is DraftKings’ Reignmakers Football, a blockchain-based fantasy sports initiative where users buy digital player cards, build a lineup and compete against other users in a daily fantasy contest. DraftKings said it’s the first operator to launch such an initiative, which gives users access to over 500 active NFL players via a company licensing deal with the NFL Players Association.

With legacy media like CBS Sports, ESPN and Yahoo Sports holding a first-mover advantage in the traditional fantasy football format, startups like Underdog Fantasy, Sleeper and PrizePicks, among others, have also gravitated toward daily fantasy sports, as well as “best ball” (a format in which users draft a team but do not manage their roster throughout the season) and other nontraditional ways of playing.

In July, Underdog completed a $35 million series B round of financing, valuing the company at $485 million. Sleeper, which launched fantasy football leagues in 2017, raised $40 million in a series C financing round the year before, led by venture capital firm Andreessen Horowitz. Last year, Sleeper said it exceeded 3 million active users.

Adam Wexler, founder and chief executive officer of daily fantasy sports platform PrizePicks, described the company as “trailblazers” in the single player daily fantasy sports category. Launched in 2017, PrizePicks prompts users to choose two to five players and pick whether they will go over or remain under a selected statistic.

“We want to be your second-screen experience when you are watching sports,” said Wexler, who categorized this era as “DFS 2.0.”

Fantasy football players were asked how important some of the following characteristics are when selecting a platform to use:

Survey conducted Aug. 16-17, 2022, among a representative sample of 532 U.S. adults who said they have participated in fantasy football in the past year, with an unweighted margin of error of +/-4 percentage points. Figures may not add up to 100% due to rounding.

Wexler expects PrizePicks to have more active users in Week 1 of the NFL season, which begins today, than it did for Super Bowl LVI in February. His confidence stems from PrizePicks’ expectation of acquiring new users throughout the year with other sports, such as MLB and NBA. The belief is those players will then compete in fantasy football, too.

“When I got into the industry, I loved the concept of daily fantasy sports but I did not necessarily like the execution of it,” Wexler said. “I thought it was way too cumbersome.” He wants fantasy players “in and out of our app in 60 seconds.”

PrizePicks, which is available to play in over half of the United States, has raised under $10 million to date without any institutional financing, said Wexler, adding that it has paid out over $500 million in winnings since 2017. The company is profitable this year after being “largely break-even” in recent years, he said.

Like PrizePicks, ThriveFantasy — a player prop-based daily fantasy sports platform that launched in 2018 — built a product that “would limit the amount of research” needed by the consumer, according to Scott Pesick, director of marketing.

Pesick said strategic partnerships with publishers FantasyPros, RotoGrinders and RotoWire, which feature a combination of custom content, podcast advertising and subscription deals, among other components, have boosted brand awareness.

“It’s like if fantasy sports, Twitter and esports had a baby,” reads a tagline on the Vivid Picks website. Spokesperson Julia Young described the rebranded app as a “socially interactive platform” that “encompasses all of the best aspects of competitive gaming and social media.”

In the late 1990s, an era without Facebook, Twitter and Instagram, Schoenke’s RotoWire aggregated sports information from newspapers and published it online 24 hours later. Now, such a practice would be considered archaic, as fantasy football players expect their news and subsequent analysis almost instantaneously.

Players regularly visit publishers like RotoGrinders, Establish The Run, NBC Sports and ESPN, among many others, to digest expert analysis, scour draft guides and stay current with player news and information. Five of the top 10 sports podcasts on Apple Inc.’s podcast platform this week were fantasy football-related, according to podcast analytics company Chartable.

“Twitter changed everything for fantasy football,” said Adam Levitan, co-founder of subscription-based outlet Establish The Run. He joined the social media platform in 2007, becoming one of the first fantasy football analysts to offer fantasy insights there before launching Establish The Run with co-founder Evan Silva in 2019. Both Levitan and Silva are veterans of Rotoworld, which was acquired by NBC Sports in 2006 and has since rebranded as NBC Sports Edge.

“Today’s media landscape has changed so much,” Levitan said. “Like, why do we need NBC, ESPN or CBS? If we have any audience already, we can just go direct-to-consumer and cut out all of the middlemen.” He declined to disclose subscriber figures.

Levitan said Establish The Run combines an emphasis on strong data with gameplay analysis, including an understanding of coaches’ tendencies and players’ interactions, to present a differentiated content offering.

“Fantasy sports players want to win,” Schoenke said. “People are motivated to buy something if they think it is going to give them a leg up. We save people a lot of time.”

Gambling.com purchased RotoWire in December for $27.5 million to expand the company’s U.S. presence, according to an announcement, which disclosed RotoWire’s 100,000-plus paid subscriptions.

The future of fantasy football

Chief among fantasy executives’ plans is to make fantasy football more socially interactive, some experts said. Others, like NBC Sports’ Mehta, hypothesized that on-screen fantasy sports integrations via streaming and on broadcasts will further emphasize the industry’s importance to the leagues and its media partners.

“Every NFL pregame show should have a fantasy talent that can talk intelligently about it, not making one of their current talent, who isn’t in the weeds, talk about it — but somebody that actually does it,” said NBC Sports’ Matthew Berry, the popular fantasy football personality who spoke to Morning Consult in a wide-ranging interview published this week.

Disney’s Marshall, who described fantasy sports as “one of the original social media experiences,” echoed Champagne’s sentiments, stating that ESPN wants players to “feel more gratification, moments of delight and moments of connection” with fellow competitors.

With choice and personalization serving as guiding fantasy principles, Disney is exploring new features around providing players more flexibility to engage with ESPN’s fantasy sports products, according to Marshall. He didn’t disclose details but said Disney is “working on some next-generation concepts” to keep pace with consumers’ changing habits.