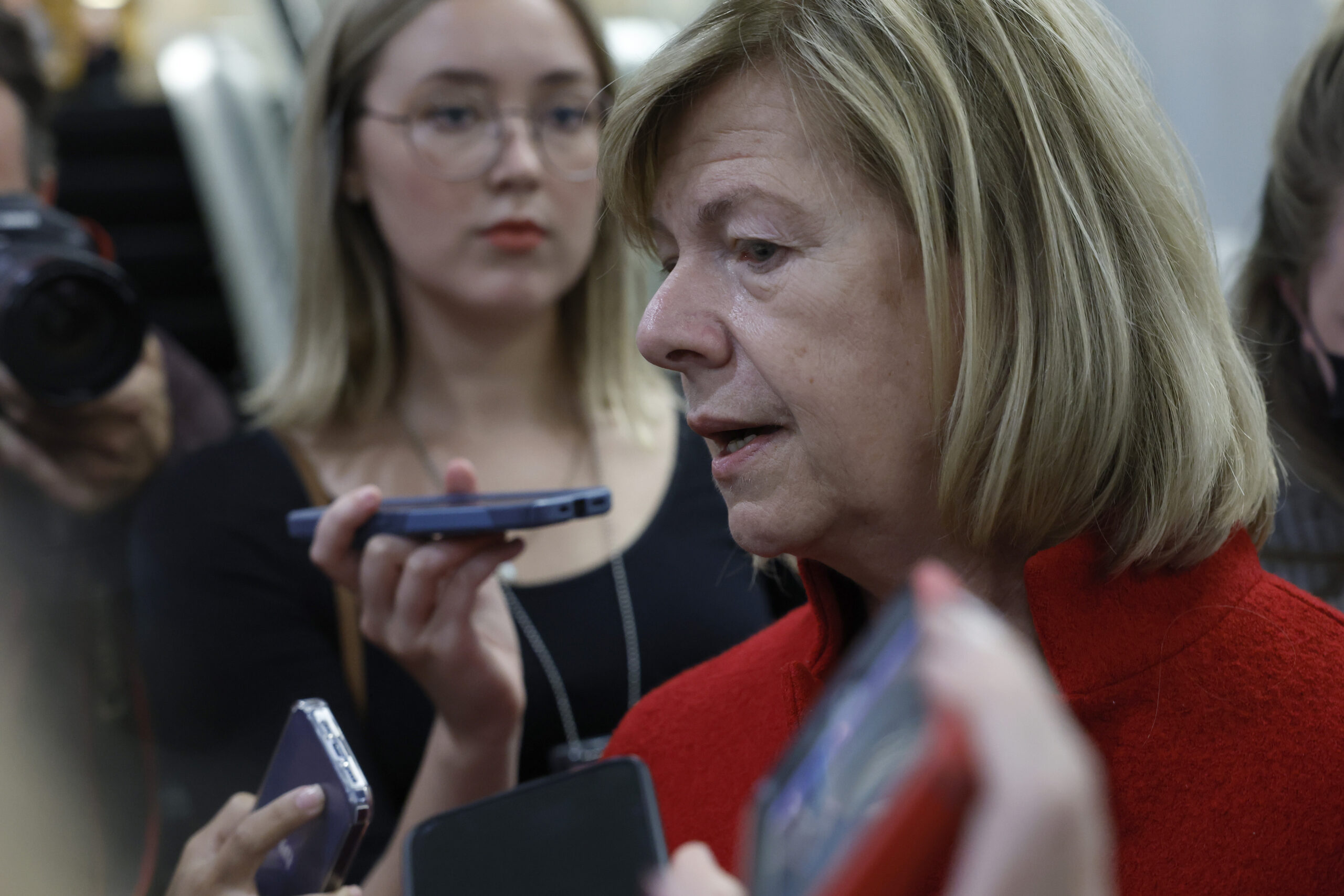 Sen. Tammy Baldwin (D-Wis.) speaks to reporters in the Senate Subway during a vote in the U.S. Capitol in Washington, D.C., on Sept. 8, 2022. (Anna Moneymaker/Getty Images)
By Eli Yokley

As a bipartisan group of senators works to advance legislation to codify same-sex marriage rights at the federal level, a new Morning Consult/Politico survey shows they’ve got much of the public’s support at their back, even if Senate Republicans don’t sign off on the measure.

Survey conducted Sept. 9-11, 2022, among a representative sample of 2,006 registered voters, with an unweighted margin of error of +/-2 percentage points. Figures may not add up to 100% due to rounding.

A group of senators led by Democrat Tammy Baldwin of Wisconsin and Republican Susan Collins of Maine has been working to reach a deal on bipartisan legislation to preserve same-sex and interracial marriage rights at the federal level. This follows the Supreme Court’s decison to overturn abortion protections, which included a suggestion from Justice Clarence Thomas that the jurists should revisit past marriage and contraception rulings grounded in similar judicial precedent.

Senate Majority Leader Chuck Schumer (D-N.Y.) has vowed that his chamber will vote on the legislation, another version of which passed the House with bipartisan support this year, before lawmakers leave town for the October campaign season.

But the advancement of the legislative effort has stalled as negotiators work out provisions dealing with religious liberty exemptions and make clear that polygamous marriages will not be legal, as Collins told Punchbowl News on Monday, in order to calm the concerns of enough Senate Republicans to overcome the legislative filibuster.

Baldwin has publicly expressed confidence that the concerns are minor and said a Senate vote could come as soon as next week, but the path forward is unclear given the quickly approaching midterm elections.

Retiring Sen. Rob Portman (R-Ohio) is on board with the measure, and Sen. Thom Tillis (R-N.C.) has also been involved in the talks — two of more than a dozen Republican senators whose votes are believed to be in play, according to a Senate GOP aide. But supporters do not yet have enough votes to overcome a filibuster, and at least one other Republican senator — the vulnerable Ron Johnson of Wisconsin, who initially expressed openness to the measure — has changed his position on whether such legislation is necessary.

While public backing for marriage protections could make such a vote politically uncomfortable in the Senate, only Johnson appears to be highly vulnerable, given that the bulk of the Senate map is playing out in swing or GOP-friendly states where no Republican incumbent is on the ballot. The other Republican senator facing a potentially close contest, Marco Rubio of Florida, has downplayed the necessity of enshrining such protections federally, echoing statements from other Senate Republicans.

The latest Morning Consult/Politico survey was conducted Sept. 9-11, 2022, among a representative sample of 2,006 registered voters, with an unweighted margin of error of plus or minus 2 percentage points.