With Charles on the Throne, Many Younger Britons Say It’s Time to Move On From the Monarchy

A role for the crown is still the dominant position in the U.K., but there’s a stark age gap 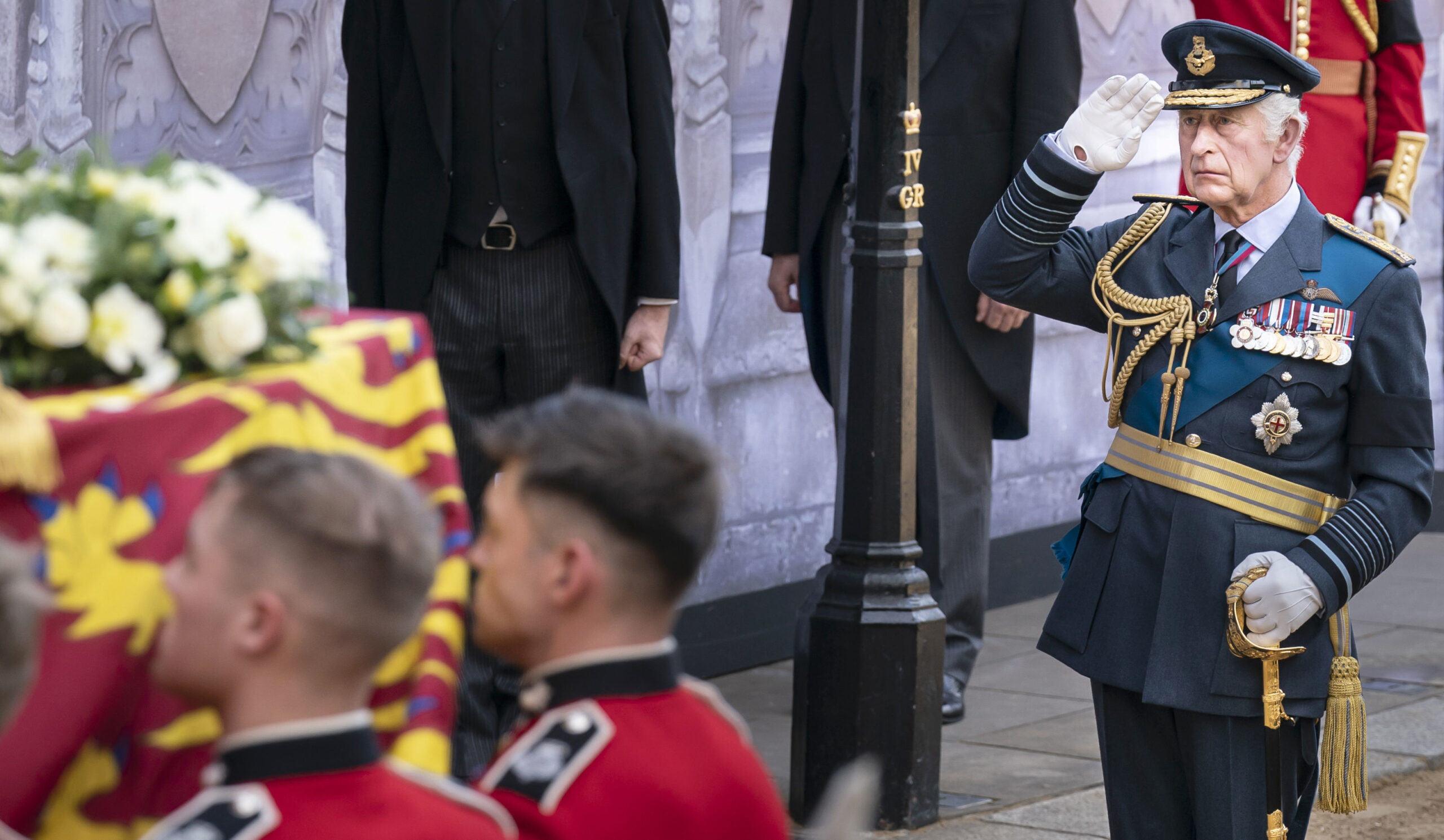 King Charles III salutes as the bearer party on Wednesday carry the coffin of his mother, Queen Elizabeth II, into Westminster Hall, London, where it will lie in state ahead of her funeral next week. (Danny Lawson - WPA Pool/Getty Images)
By Matthew Kendrick

Queen Elizabeth II enjoyed nearly universal approval among her subjects, according to a new Morning Consult survey fielded in the wake of her passing, but support for the monarchy’s continuing role in British government is considerably lower among younger people, Londoners and those outside England, suggesting the United Kingdom’s relationship with the House of Windsor may be changing. 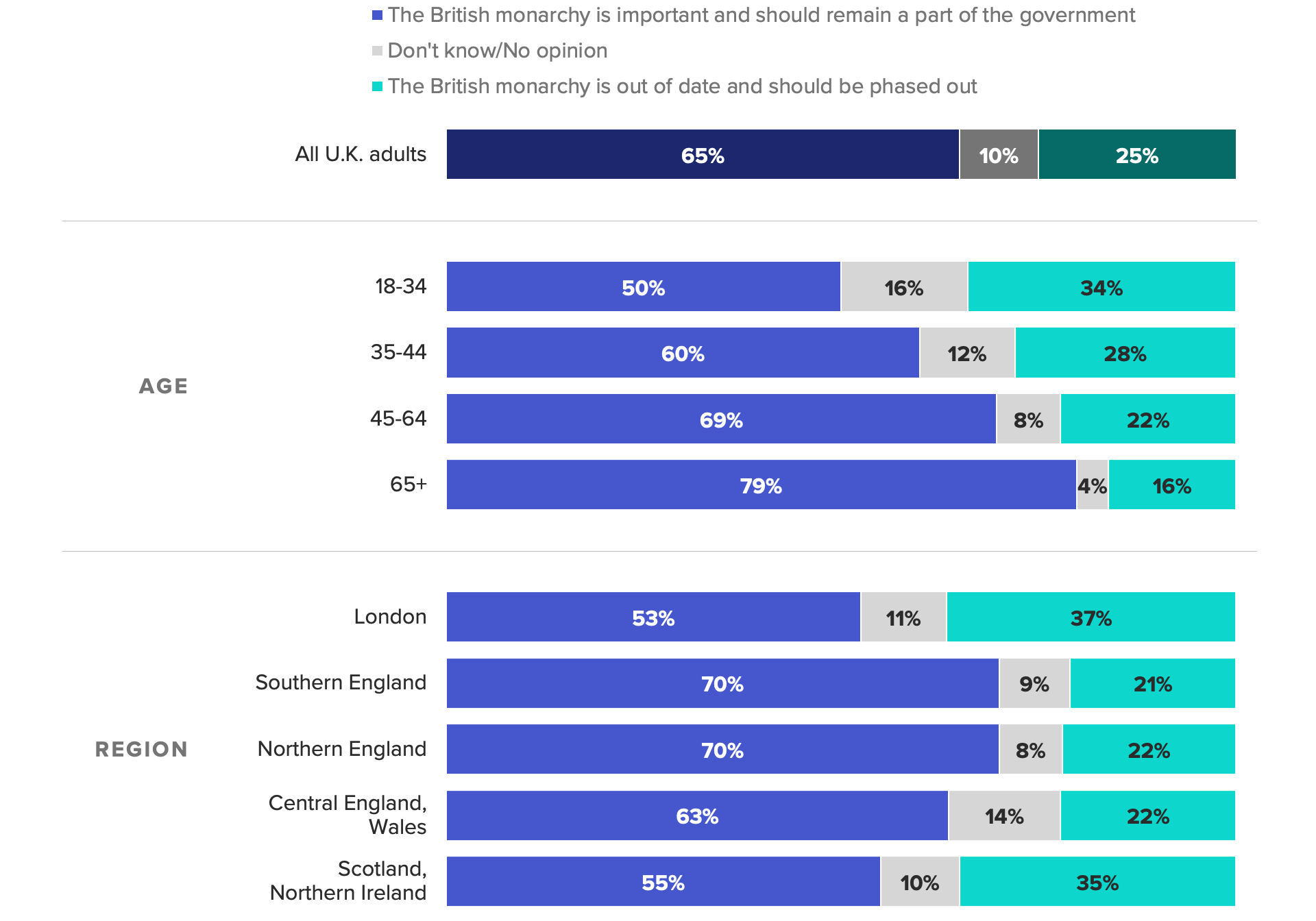 Survey conducted Sept. 12-14, 2022, among a representative sample of 1,000 adults in the United Kingdom, with an unweighted margin of error of +/-3 percentage points. Figures may not add up to 100% due to rounding.

Age and geography are key factors in support for the monarchy

When Queen Elizabeth II was born in 1926, the British Empire was arguably at the height of its power, ruling over nearly a third of the world’s landmass and a quarter of its population after centuries of warfare and colonization. By the time she was coronated 27 years later, the empire was rapidly collapsing, with India and Pakistan and Israel already independent and British troops attempting to suppress liberation movements in Kenya and British Malaya. Meanwhile, Gamal Abdel Nasr’s coup in Egypt threatened the Suez Canal, the keystone of Britain’s thalassocracy.

Elizabeth’s reign would coincide with waning U.K. power over every remaining possession save a few small islands and exclaves scattered around the globe, with more and more former subjects dissociating from the British Commonwealth right up to the end.

Overseeing the disentanglement of an empire is an unenviable fate for any monarch, but more than three-quarters of adults in the United Kingdom say the queen carried out her largely symbolic duties “very well” compared to previous monarchs. Fewer than 5% say she was not up to par.

Queen Elizabeth II Gets Top Marks From Her Subjects, Who Have Lower Expectations for King Charles III
British adults were asked to evaluate how well the queen performed her duties compared with past monarchs, and how well they expect her heir to perform

Survey conducted Sept. 12-14, 2022, among a representative sample of 1,000 adults in the United Kingdom, with an unweighted margin of error of +/-3 percentage points. Figures may not add up to 100% due to rounding.

The queen’s heir, though, takes the throne amid much lower expectations from his subjects, with just 39% saying they think he will perform “very well.” King Charles III’s favorability is also 17 percentage points lower than his mother’s (66% to 83%) and only 31% of British adults say they have a “very favorable” view of him, compared with 62% who say the same about the late queen.

As people born long after the height of the empire — and who in many cases have family roots in communities once oppressed by the crown — become an increasingly large part of the British populace, the monarchy may struggle to retain the same esteem of its subjects as it enjoyed in the second Elizabethan era.

And while there may be questions about the British public’s appetite for a continued Windsor reign, the seismic impact of her death on the country’s consciousness is not in dispute: 88% of adults surveyed said they’d heard “a lot” about her passing, which is the largest share on record for any news event — in any country — that Morning Consult has tested.

The survey was conducted Sept. 12-14, 2022, among a representative sample of 1,000 adults in the United Kingdom, with an unweighted margin of error of plus or minus 3 percentage points.