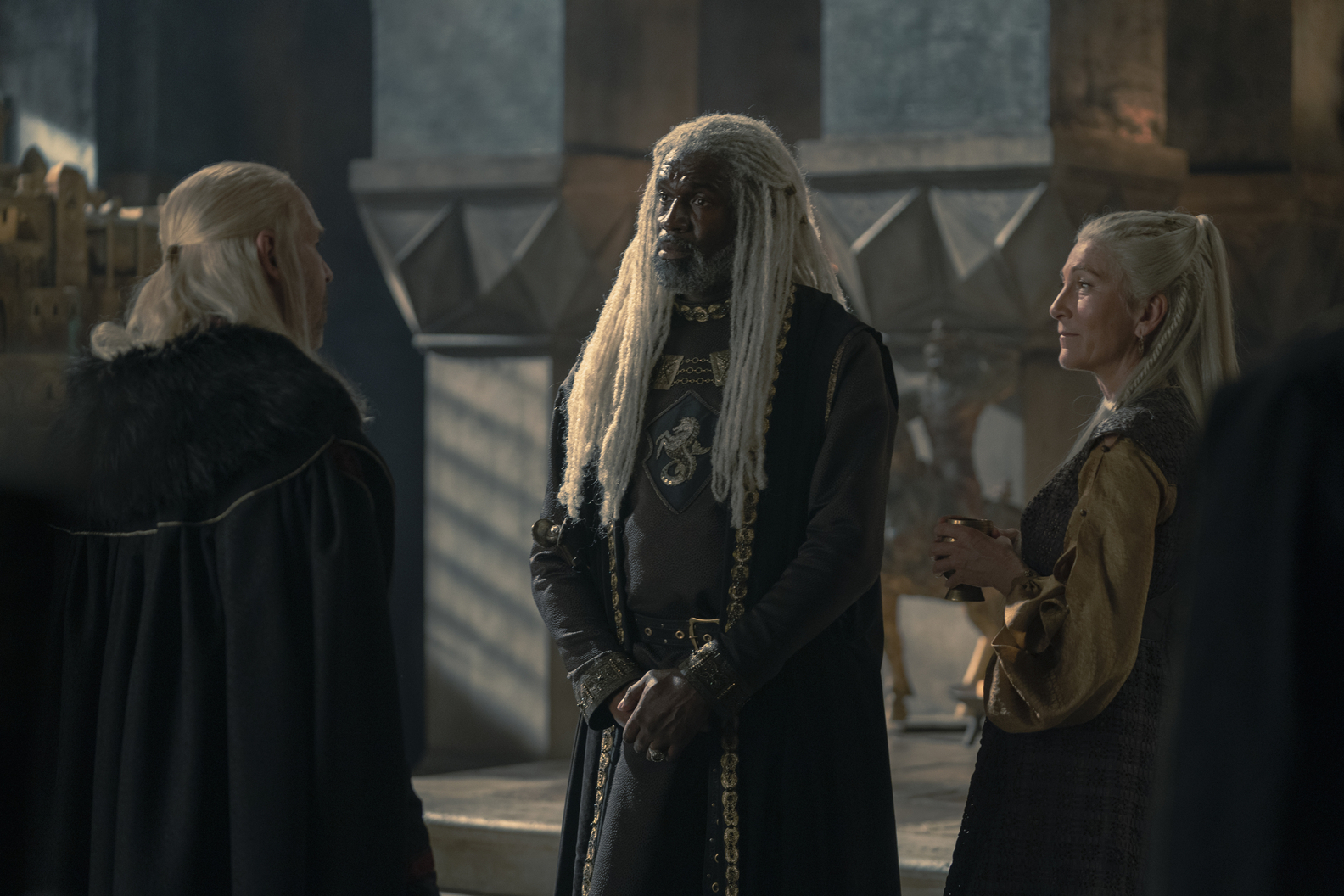 Steve Toussaint (center) plays Lord Corlys Velaryon in HBO's “House of the Dragon." About half (49%) of U.S. adults said they support casting actors of color in TV and film adaptations of other media when the source material explicitly states the race of characters as white, per Morning Consult data. (Ollie Upton/HBO)
By Saleah Blancaflor

Prime Video’s “The Lord of the Rings: The Rings of Power” and HBO’s “House of the Dragon” have much in common: They are both sweeping new fantasy series based on the works of beloved authors. They are both huge hits. And they have both been forced to deal with racism within segments of their fan bases.

“The Rings of Power” features Black actors playing elves, dwarves and hobbits in roles created for the series. “The House of the Dragon” cast Black actor Steve Toussaint to play Lord Corlys Velaryon, a character who is assumed to have pale skin in the story on which the HBO show is based. Both decisions have elicited racist backlash — including harassment toward the performers themselves — from some fans who claim those roles should be played by white actors.

It turns out those fans are part of a noisy, but very clear minority. A new Morning Consult survey shows that most U.S. adults (62%) support casting actors of color in TV and film adaptations regardless of whether the source material explicitly states the race or skin color of characters. What’s more, majorities of self-identified readers of “The Lord of the Rings” and “A Song of Ice and Fire” support diverse casting even when that source material explicitly states the characters as white.

‘The Rings of Power,’ ‘House of the Dragon’ fans support diverse casting

Respondents were asked how important it is for Hollywood TV and film productions to have casts that are diverse and representative of multiple races, ethnicities, religious beliefs and sexual/gender identities

What the racist detractors conveniently ignore, of course, is Hollywood’s long history of “whitewashing,” or when characters described as nonwhite are played by white actors in TV and film adaptations. There is little backlash when that occurs, but when it’s the other way around, some apparently see it as unacceptable. The data makes clear that these views represent only a minority of fans who have managed to make headlines by harassing actors and posting to social media.

The backlash goes beyond the realms of “The Rings of Power” and “House of the Dragon.” When Walt Disney Co. released the Star Wars spinoff series “Obi-Wan Kenobi” in May, Black actress Moses Ingram received racist messages. John Boyega and Asian-American actress Kelly Marie Tran, who co-starred in the Star Wars sequel film trilogy, also faced similar treatment. More recently, Halle Bailey, the Black actress and singer cast as Ariel in Disney’s upcoming “The Little Mermaid” live-action film adaptation, faced some racist backlash when the casting was first announced and again this month after the movie’s official trailer debuted.

Despite attacks against the casts of these productions, Morning Consult data shows that most Americans support seeing diverse actors on screen — and it serves as a reminder that backlash against diverse casting choices often represents only a small corner of the fandom. A 2019 Morning Consult poll revealed that 60% of Americans supported Bailey’s casting as Ariel.

The Sept. 14-16, 2022, survey was conducted among a representative sample of 2,210 U.S. adults, with an unweighted margin of error of plus or minus 2 percentage points.

Related: In the Battle of ‘House of the Dragon’ and ‘The Rings of Power,’ the Real Winners Are Fantasy Fans
Diversity Fandom Film and TV