Even if Jair Bolsonaro has managed to sow doubt in the electoral process, a new survey indicates Brazilians are unhappy with the president’s leadership and think little of his character 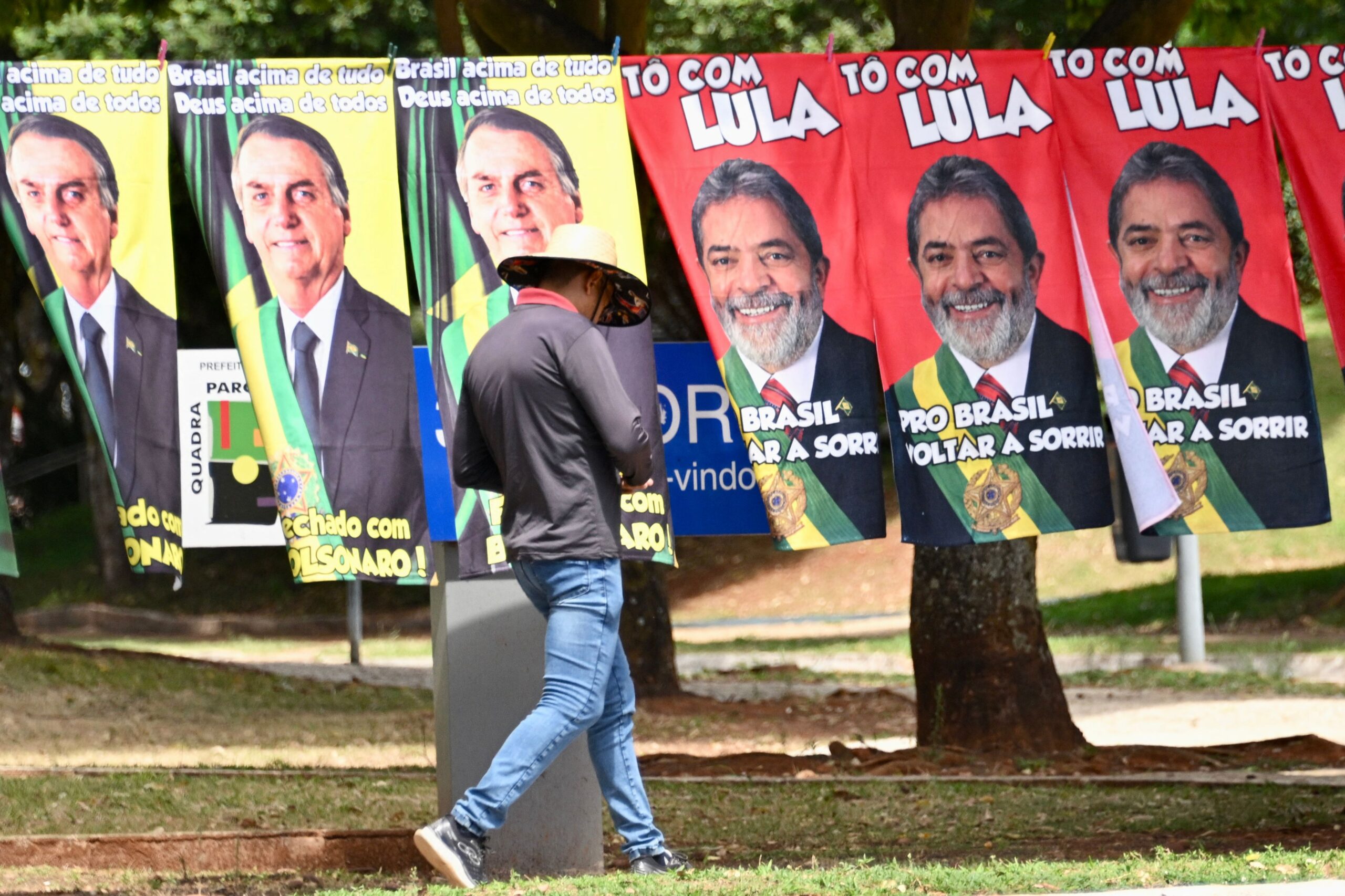 Towels with the images of presidential candidates Jair Bolsonaro and Luiz Inácio Lula da Silva are seen for sale Tuesday at a street in Brasilia ahead of Sunday's presidential election. (EVARISTO SA/AFP via Getty Images)
By Matthew Kendrick

Former Brazilian President Luiz Inácio Lula da Silva is sitting pretty in the polls as he attempts to unseat President Jair Bolsonaro in Sunday’s first round of elections, but a new Morning Consult survey suggests Bolsonaro’s attempts to undermine public confidence in the electoral system are making some headway.

Bolsonaro has lagged behind Lula for months and has attacked the integrity of the electoral system. Many fear he is preparing to groundlessly contest a loss at the ballot box in what might amount to a coup.

Survey conducted Sept. 23-25, 2022, among a representative sample of 1,000 Brazilian adults, with an unweighted margin of error of +/-3 percentage points. Figures may not add up to 100% due to rounding.

Despite Brazil’s globally praised electoral system, which often returns results the night of the election, just 31% think the upcoming contest will “definitely” be free and fair, according to the Sept. 23-25 survey of 1,000 Brazilian adults. The good news is that only a tiny minority (6%) are convinced the election will “definitely not” be free and fair, while another 36% think it will “probably” be aboveboard.

Still, doubt may be just what Bolsonaro needs to press forward with his objections, particularly if the contest proves closer than preliminary surveys indicate. After all, certainty that an election is rigged would disincentivize Bolsonaro supporters from participating at all, and though Brazil compels all citizens between the ages of 18 and 70 to vote, the fine for failing to do so amounts to less than $1. In the 2018 contest, over 20% of the electorate did not participate.

That said, Brazilians are clearly unhappy with Bolsonaro’s leadership and have been for some time, according to Morning Consult’s daily tracking of Global Leader Approval Ratings.

More Brazilians disapprove than approve of Bolsonaro’s handling of every issue area surveyed. In fact, only on national security and immigration is approval within at least 6 percentage points of disapproval. (The survey has a 3-point margin of error.)

Respondents were asked if they approve or disapprove of President Jair Bolsonaro’s handling of the following issues: 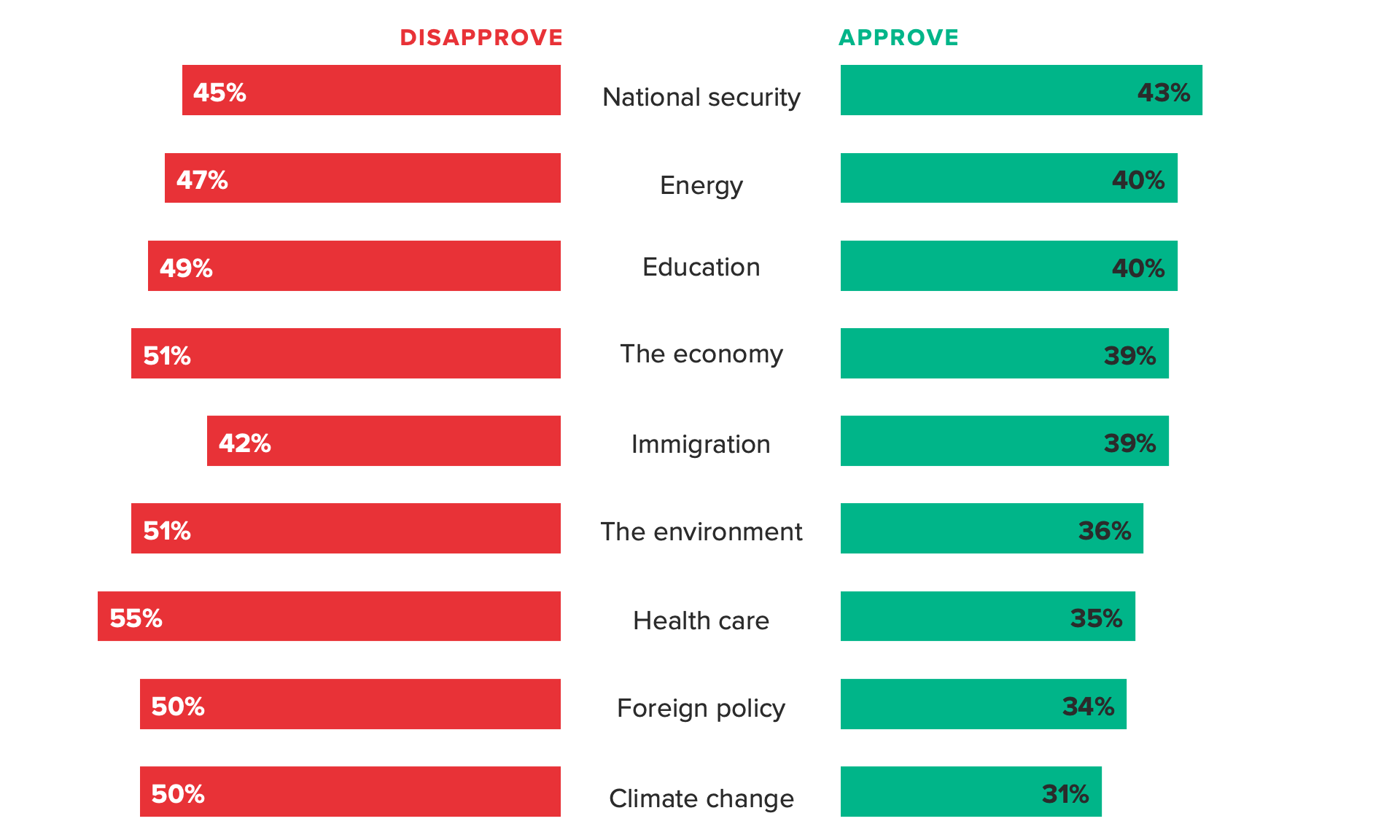 Survey conducted Sept. 23-25, 2022, among a representative sample of 1,000 Brazilian adults, with an unweighted margin of error of +/-3 percentage points. “Don’t know/No opinion” responses are not shown.

On the economy and health care — two of the three issues Brazilians have consistently rated as the biggest problems facing the country, according to local pollster Genial/Quaest — majorities of Brazilians disapprove of Bolsonaro’s approach.

Adding to the generally pessimistic mood around Bolsonaro, many Brazilians contrast his leadership qualities unfavorably with Lula’s — though few would go so far as to put the former president on a pedestal.

political intelligence
Brazilians Favor Lula Over Bolsonaro on Leadership Qualities
They view Lula as more up to the task, but don’t find him much more trustworthy 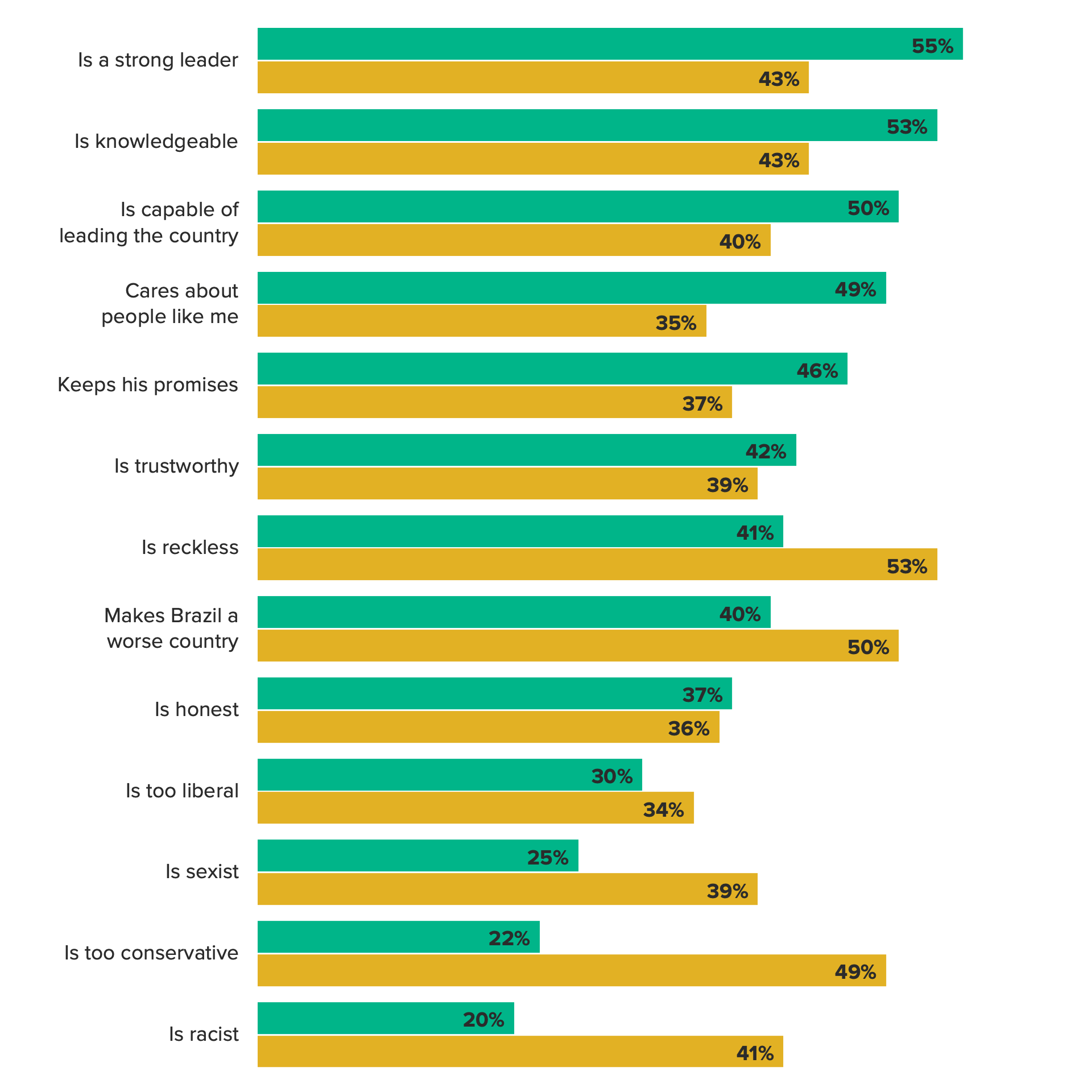 Survey conducted Sept. 23-25, 2022, among a representative sample of 1,000 Brazilian adults, with an unweighted margin of error of +/-3 percentage points.

A 53% majority say Bolsonaro is “reckless,” and slightly fewer say he is “too conservative” and “makes Brazil a worse country.” Roughly 2 in 5 Brazilian adults say he is “racist” and “sexist,” and just 36% say he is “honest.”

Then again, only 37% say the same about Lula, and 40% also said he makes Brazil worse off as a country, though the former president’s track record in office seems to have bolstered confidence in his capability to do the job. Majorities say he is a “strong leader” and “knowledgeable,” while 49% say he “cares about people like me.”

These findings suggest that, if victorious, Lula will have his work cut out for him in persuading Brazilians that their democratic system is trustworthy — as is he — in order to secure a fourth term in office in 2026.

Related: Brazil’s Place in the World May Be at Stake in Its Coming Election
Latin America Leader Approval Political Intelligence