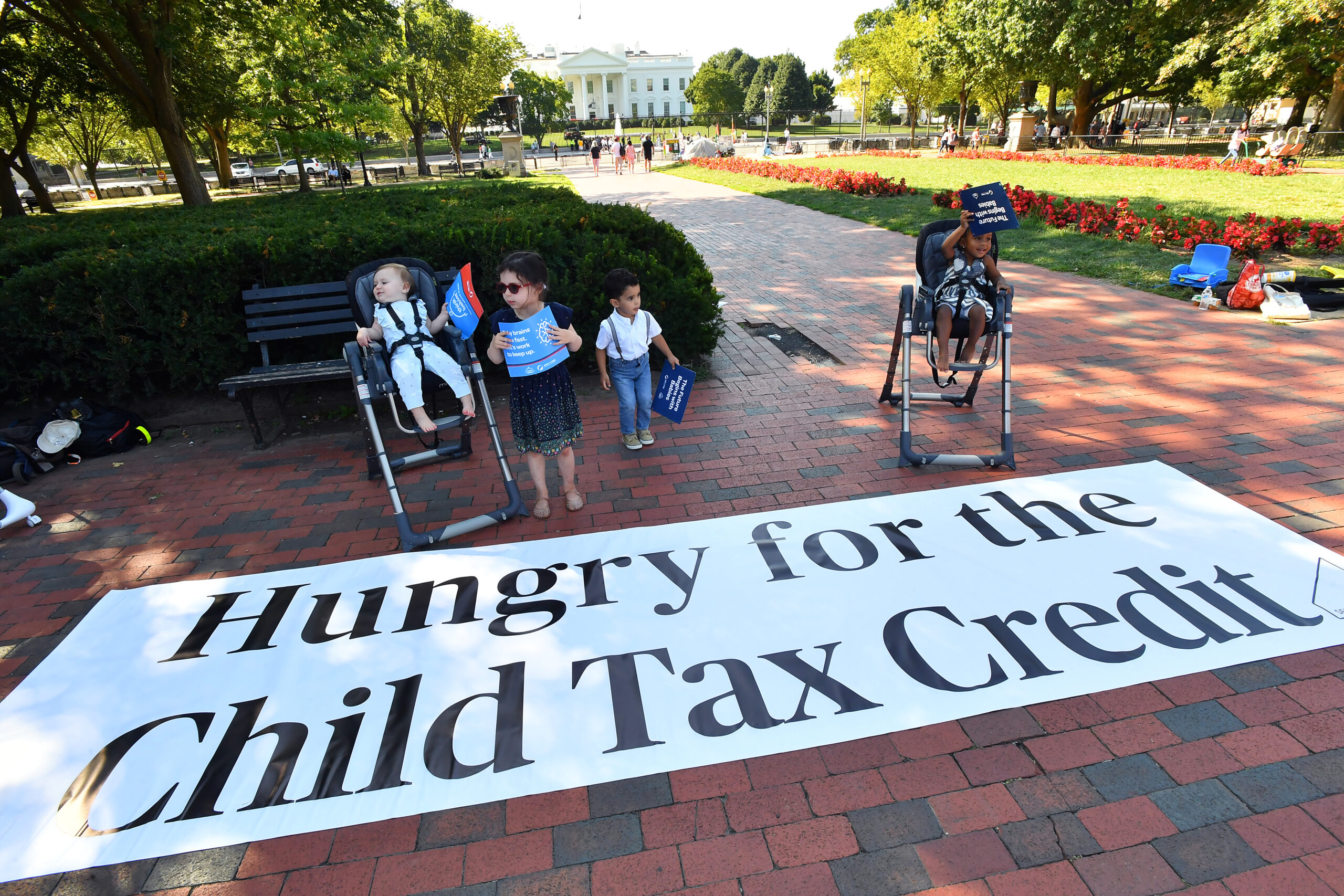 Parents and caregivers with the Economic Security Project gather outside the White House to advocate for the child tax credit on Sept. 20, 2022, in Washington, D.C. A Morning Consult/Politico survey found that 51% of voters who received the child tax credit would vote for a congressional Democrat if the election were held today. (Larry French/Getty Images)
By Amanda Jacobson Snyder

After months of waning support on the generic congressional ballot from voters who received expanded child tax credit payments, Democrats have staged a comeback with the group, according to a new Morning Consult/Politico survey.

Surveys conducted among representative samples of roughly 2,000 registered voters each, with unweighted margins of error of +/-2 to 5 percentage points. Figures may not add up to 100% due to rounding.

U.S. families with children who qualified for the expanded child tax credit payments, which were issued as part of the Biden administration’s COVID-19 financial relief package, received their last automatic monthly check in December 2021. As families struggled to regain their financial footing amid the pandemic and removal of the monthly payment cushion, support for congressional Democrats fell in February and April among voters who received the payments.

Critics noted that the Inflation Reduction Act, passed in August, marked yet another instance of family and child care policies’ being left on the cutting-room floor, despite majority support among all voters. In a July survey, about 3 in 5 voters said they backed a renewal of the monthly child tax credit payments.

This support is not lost on lawmakers on the left, who are renewing a push to move such policies past the finish line by year-end. Vice President Kamala Harris told the Congressional Black Caucus this month that the administration is “working like hell to make sure we make the Child Tax Credit permanent.”

Sen. Michael Bennet (D-Colo.) told Axios in September that reinstating the payments was a priority for the White House, adding that “I think we can find a way at the end of the year,” though he also indicated that discussions with Sen. Mitt Romney (R-Utah) about the possibility of reviving the credit had made little progress.

Progressive groups have also called on lawmakers to make good on their promises to support families. The Automatic Benefit for Children Coalition called on lawmakers in August to reinstate the tax credits, and ahead of passage of the CHIPS and Science Act, which provided billions in subsidies for the U.S. semiconductor industry, the Center on Budget and Policy Priorities argued that Congress should be prioritizing families over corporate tax breaks.

Lawmakers may be wise to step up efforts to pass such legislation, the survey indicates: 40% of child tax credit recipients said the end of the payments had a “major impact” on their financial security.

The latest Morning Consult/Politico survey was conducted Sept. 30-Oct. 2, 2022, among a representative sample of 2,005 registered voters, with an unweighted margin of error of plus or minus 2 percentage points.