Tech’s innovative disposition, along with ambitious sustainability goals that align with what consumers expect, give the sector a bit of a halo effect, writes tech analyst Jordan Marlatt 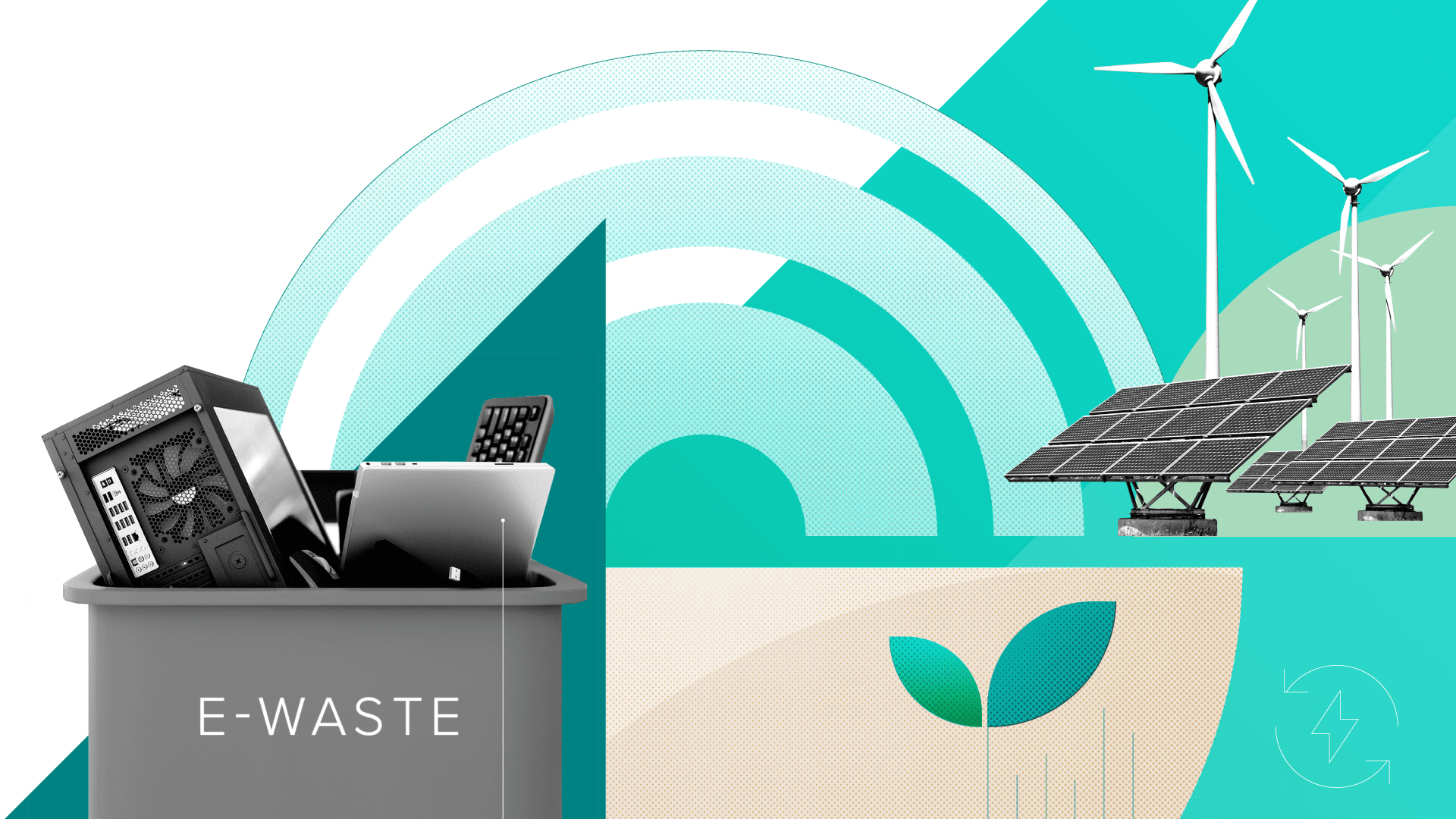 This is part of Morning Consult’s What Sustainability Means to Consumers research, which gathers the views of roughly 2,200 U.S. adults on what sustainable actions consumers expect from the brands they purchase from.

While consumers see tech as having a net positive impact on the environment, they also have high expectations that companies in the sector will drive innovation forward more generally. Tech companies need to deliver on their ambitious climate commitments to capitalize on the moment.

Download the What Sustainability Means to Consumers: Tech report here.

The technology industry is benefiting from a halo effect when it comes to sustainability.

Over the past few years, nearly every major technology company has announced sustainability goals, ranging from electrifying delivery fleets to eliminating plastics in product packaging to achieving carbon neutrality by target dates. Amazon.com Inc., for example, in 2019 co-founded The Climate Pledge, a commitment to reach net-zero emissions by 2040. A few months later, Microsoft Corp. announced it was aiming to be carbon negative by 2030. Six months after that, Apple Inc. committed to going 100% carbon neutral by the same year — and then Google announced plans to run on carbon-free energy by 2030.

But tech is not unique in these ambitious climate targets. Industry leaders across sectors have made similar commitments. Morning Consult research shows that what makes tech’s position unique is that consumers are more likely to view it as part of the solution than the problem when it comes to sustainability, albeit with somewhat higher expectations to drive innovation in this space and to deliver on promises.

Sustainability in tech: products, data centers or both?

There are two ways to look at what sustainability means for tech: the issues consumers see and want tech to resolve, and the issues tech companies identify and are committing to addressing.

For consumers, sustainability in technology has much to do with products, their packaging and their manufacturing process. Most people’s touchpoint with the tech industry is through the physical devices they interact with every day, whether it’s a Dell laptop, Samsung phone or Apple Watch. These themes dominated in open-ended responses in a July survey, and consumers also pointed to recycling of products and packaging and the use of sustainable materials in manufacturing to define sustainability for the sector.

For tech companies, sustainability focuses largely on operations. Behind the devices consumers love are the “invisible” (actually gigantic) data centers that power the cloud services that make the magic all possible. These massive, power-hungry server farms account for 1% to 1.5% of all energy consumption globally, but because they are largely unseen, consumers don’t point to them as an area where sustainability initiatives should be focused. Tech companies, on the other hand, are all too aware of the footprint these data centers have, and thus much of their sustainability efforts focus on this area.

Respondents were asked which of the following actions are top priorities when it comes to the focus of technology companies’ sustainability efforts, selecting up to three options:

So, what are tech companies saying about their sustainability initiatives, and do they align with the public’s expectations?

We tested 18 different commitments and 32 real-world actions major tech companies have taken in the past few years to determine which ones people think have the most positive environmental impact and whether they would purchase from a company that took those actions.

Aligning with consumers’ understanding of what sustainability means for tech, commitments and actions around reducing the environmental impact of product packaging and manufacturing were the most popular. Using a MaxDiff analysis, which gauges the actions respondents perceive as having the most and least positive environmental impact, we found that “eliminating waste sent to landfills,” “using only recycled materials in products and packaging” and “eliminating plastics in packaging” were all popular commitments relative to the others. These product-oriented commitments also enjoy bipartisan support, a tricky feat with such a polarized topic.

Related: For Many Shoppers, the Most Sustainable Action Is to Buy Less

Water conservation as a winning initiative

Less intuitive is the popularity of water conservation commitments and actions. “Replenish more water than we consume” earned the top spot among respondents for having a positive environmental impact, despite water issues being scarcely mentioned in unprompted feedback on what sustainability means in tech. This is most likely due to how the issue is framed, reinforcing that how companies communicate their goals can be as important as what they communicate.

The issue of water conservation becomes important once people are given appropriate context, such as water security in communities or water use in manufacturing. The knowledge gap between the real-world environmental impact of major tech companies and what consumers think sustainability means in this space presents an opportunity for tech companies to communicate their commitments and actions while also educating consumers on why those are important.

Respondents were asked how important each of the following factors is for tech companies. Charted below are the average utility scores, which indicate the relative importance of each attribute across respondents. Showing top 10 goals:

Survey conducted July 22-23, 2022, among a representative sample of 2,210 U.S. adults, with an unweighted margin of error of +/-2 percentage points. A utility score of 100 indicates that a given action has an average likelihood of being considered the most important to an individual respondent. A score of 200 indicates the action is twice as likely as average to be considered the most important, while a score of 50 indicates it is half as likely.

On the other hand, there are issues that tech companies are all talking about, but maybe not in the right way. Nearly every major tech company has some type of carbon reduction goal, but goals and actions that mentioned carbon were notably less effective than others in our research. This is largely rooted in “carbon footprint” and other carbon-focused terms’ inaccessibility compared with concepts like climate change, energy conservation and renewable resources.

When tackling carbon emissions, our research shows that speaking to the issue in the context of renewable energy and other specific solutions is more impactful than talking about carbon impact generally, as the term by itself does not excite consumers. Using different, more specific terms to get at the same idea, such as powering operations with renewable energy, also unites Republicans and Democrats.

Survey conducted July 22-23, 2022, among a representative sample of 2,210 U.S. adults, with an unweighted margin of error of +/-2 percentage points. A utility score of 100 indicates that a given action has an average likelihood of being considered the most important to an individual respondent. A score of 200 indicates the action is twice as likely as average to be considered the most important, while a score of 50 indicates it is half as likely.

Tech companies can set an example, if they capitalize on the moment

Tech companies are in a unique — and rather fortunate — position to be seen as part of the sustainability solution while also taking steps toward making their own operations more environmentally friendly. As consumers, and particularly younger people, see sustainability as increasingly important and also place the onus on companies to take action, the challenge facing tech companies is to seize this moment before the luster fades.

That tech companies will make good on their commitments is not guaranteed. With high expectations comes high visibility for the sector. Cloud service providers, for example, have come under scrutiny for looking to drive their operations with green energy while also providing cloud services to oil and gas companies, or for reportedly underrepresenting their own greenhouse gas emissions. With that in mind, tech companies need to be cognizant of not only their own operations, but also what they can do to drive sustainability for other industries through innovation.

Now, tech companies must make good on their commitments and set an example for other industries more broadly, or risk breaching the trust consumers are placing in them.