With Grocery Inflation Showing No Signs of Slowing, More Consumers Are Buying Less 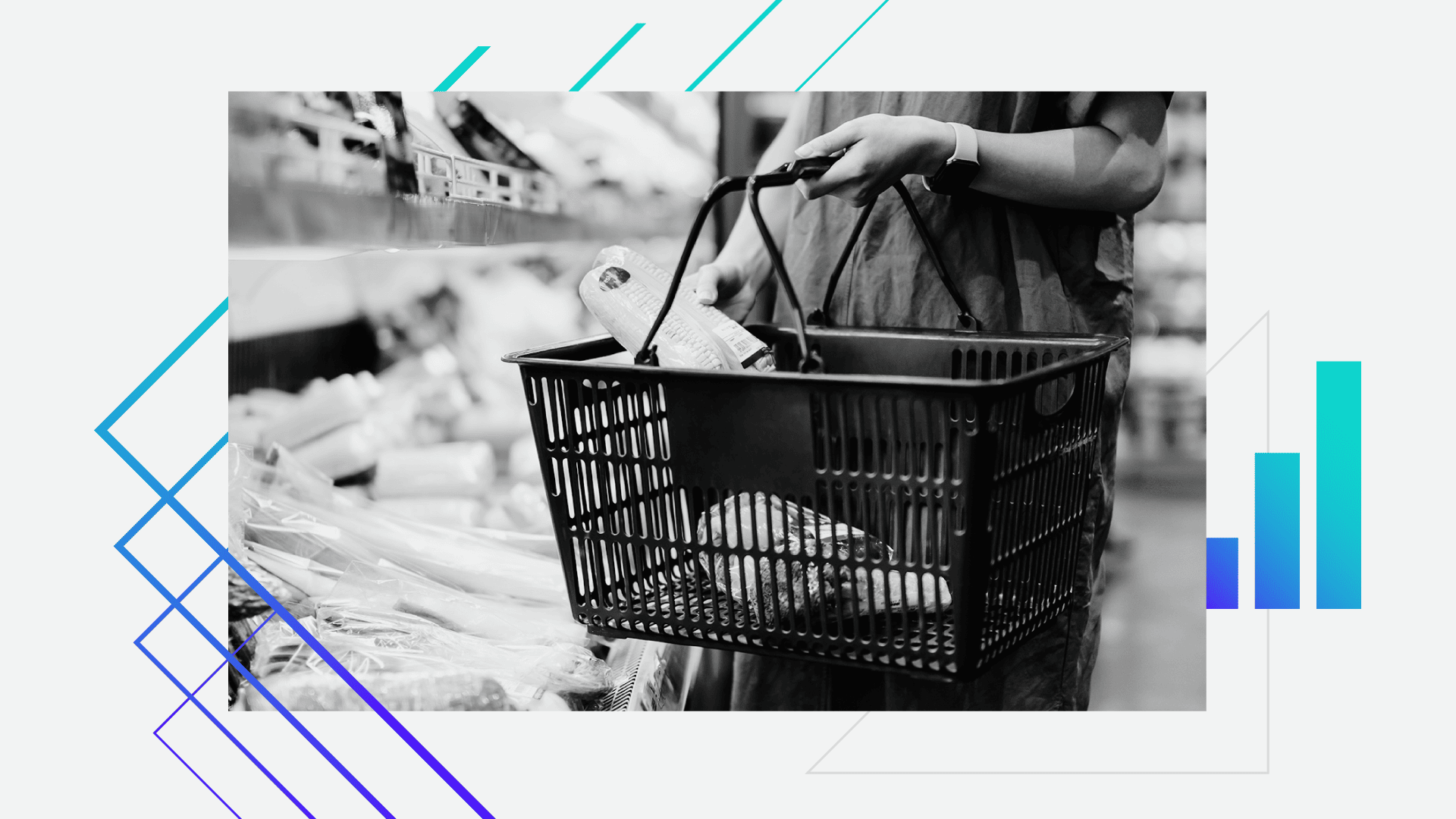 Purchasing fewer items overall is an increasingly common tactic concerned consumers are employing to save on groceries amid persistent price growth in the category. Retailers and food & beverage brands alike should take note, as this could be an indication of slowing demand.

The share of U.S. adults who say they are “very concerned” about grocery inflation has remained high, even outpacing concern over inflation in general, since Morning Consult began tracking in July.

Heightened concern over prices in this category is understandable given that food represents the second largest monthly expenditure for most people, behind only housing. Plus, the consumer price index for food at home was up 13% year over year in September as prices for groceries continued to spike amid high demand and supply chain disruptions. This 13% growth is on top of already-high total spending.

Share of U.S. adults who say they are very concerned about inflation in general and in the grocery category specifically

Surveys conducted biweekly among representative samples of roughly 2,200 U.S adults each, with unweighted margins of error of +/-2 percentage points.

Cost concerns are trending upward across many grocery categories

Initially, consumers’ concerns centered on the categories they purchased the most frequently, and where price increases may have been the most obvious. Nearly a year ago, high shares of consumers expressed concerns about rising prices in categories representing a greater dollar share of people’s grocery carts, like meat and produce. Now, as prices have risen across the store, concern has also risen in less frequently purchased categories and categories that have experienced the most price growth.

For instance, shoppers’ concerns about the cost of dairy have escalated the most, up 10 percentage points, alongside 15.9% price growth in the category — one of the steepest increases of any food category. In less frequently purchased categories like pantry items and ingredients, the shares who said they are very concerned about cost are up 9 and 8 percentage points, respectively, since last October. 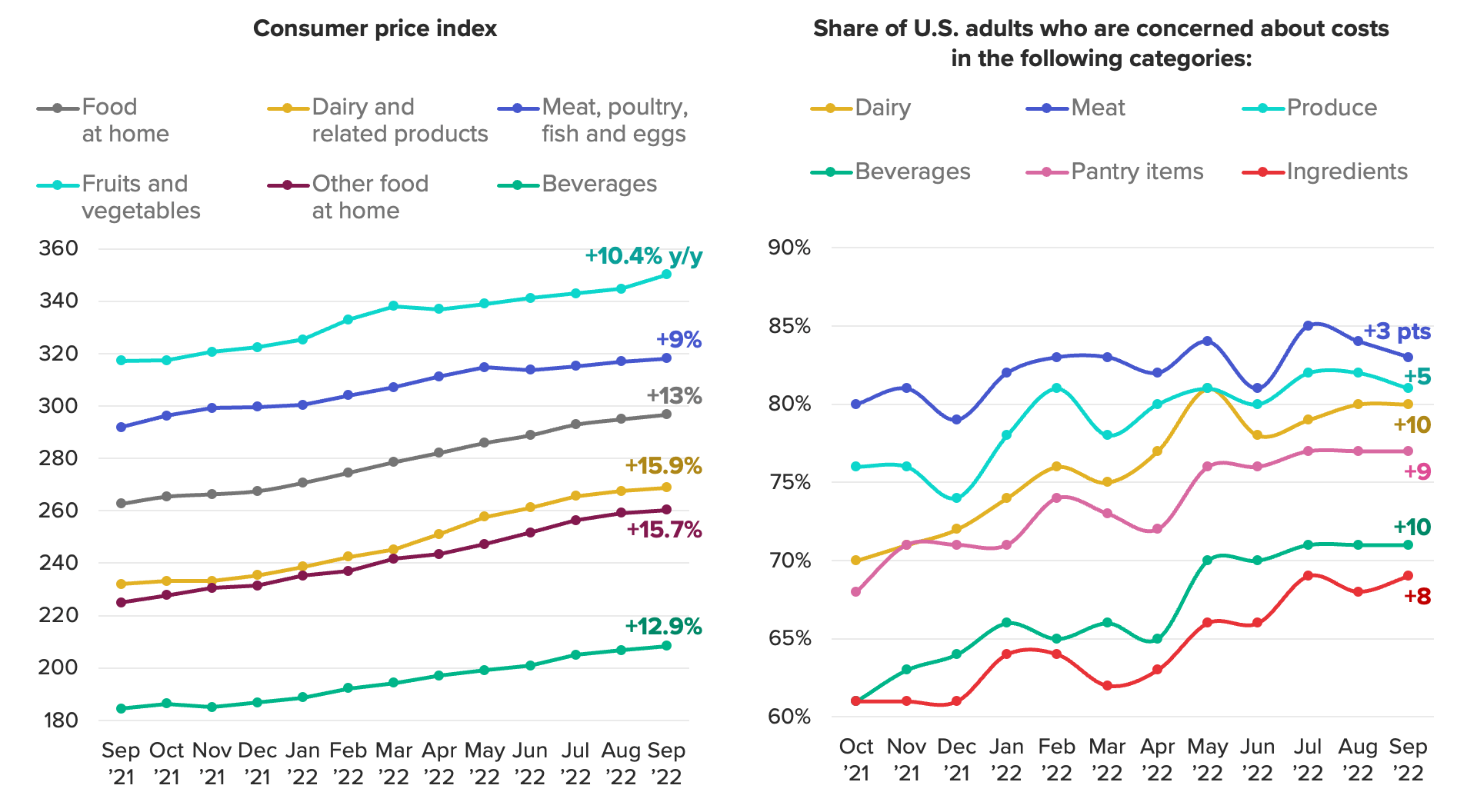 To save money, shoppers across all income brackets are buying fewer items

Amid widespread concern, shoppers are employing myriad tactics to save on grocery bills. In our latest survey, 82% of shoppers said they at least sometimes made an effort to save on groceries in the past month because of inflation. The most common cost-saving actions are comparing prices and buying generic or store brands instead of name brands. Consumers have consistently relied on these tactics, but recently a growing number have been employing a different approach: buying less overall.

Share of grocery shoppers who said they sometimes or often do the following to save money on groceries:

Surveys conducted monthly among representative samples of roughly 2,000 U.S. adults who have primary or shared grocery shopping responsibilities for their households, with unweighted margins of error of +/-2 percentage points.

The share of grocery shoppers who said they often purchased fewer items to save on their grocery bills climbed from 15% in October 2021 to 24% last month. Meanwhile, the share buying items in bulk to save money stayed relatively stable over the same period, indicating this is not a case of people making fewer purchases but in larger quantities. While the shares using these cost-saving tactics vary by income and generation, each demographic increasingly reports purchasing fewer items.

This behavior is most common among people from lower-income households, who are more likely to have to stay within a monthly budget than higher earners. But those in the highest income range, earning at least $100,000 annually, are also 6 percentage points more likely to say they often buy less.

Age also plays a factor in determining who is most likely to rely on this particular cost-cutting behavior. Surprisingly, Gen Xers, not younger generations, are the most likely to report buying fewer items. Financial stress is weighing heavily on these adults. Morning Consult’s Financial Well-Being tracker shows Gen Xers had the lowest overall score in September, indicating their financial situations are under pressure from higher prices across the board. 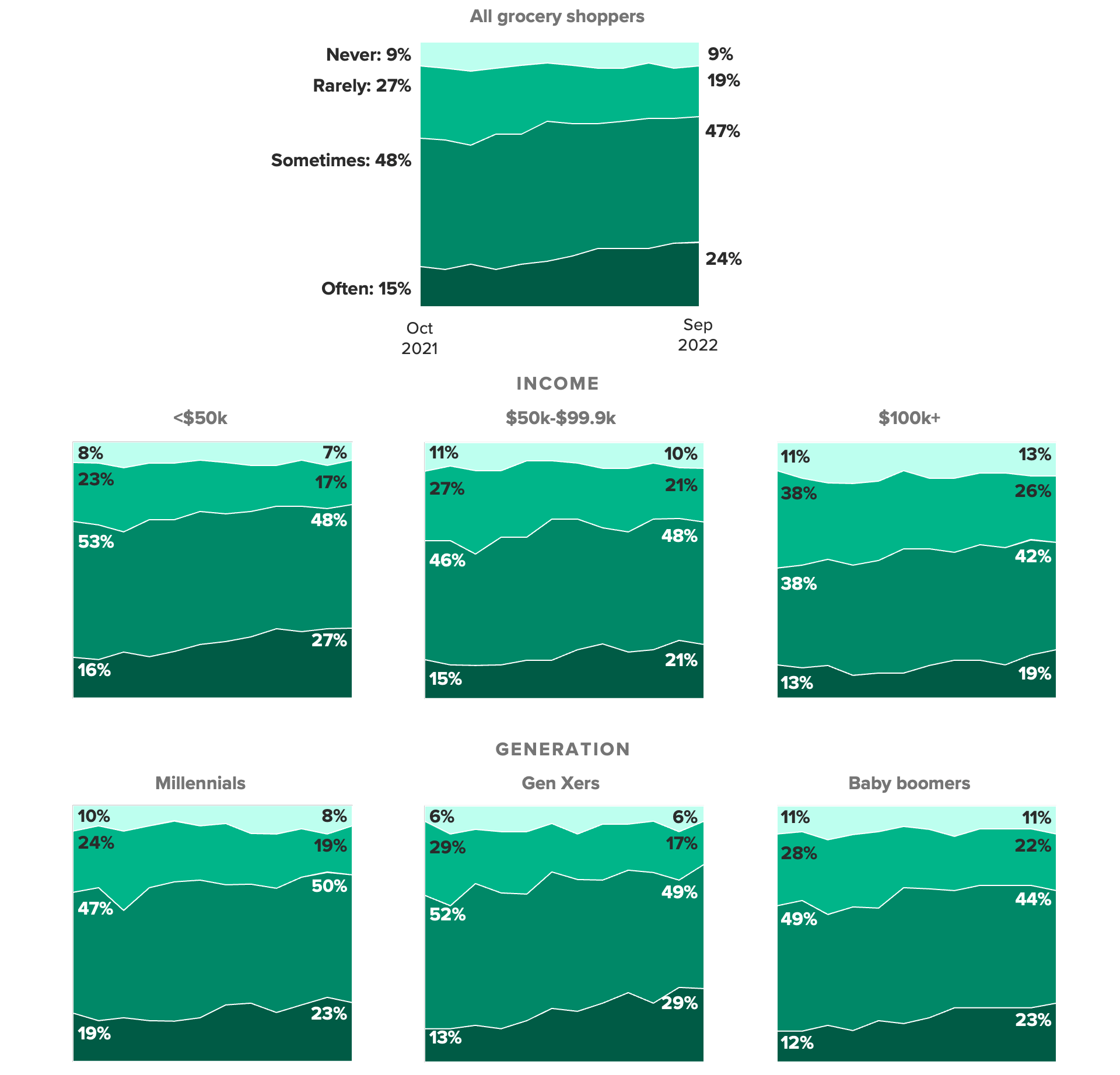 Surveys conducted monthly among representative samples of roughly 2,000 U.S. adults who have primary or shared grocery shopping responsibilities for their households, with unweighted margins of error of +/-2 percentage points. Figures may not add up to 100% due to rounding.

Buying fewer items is a stark contrast to the pantry-loading seen during the early days of the COVID-19 pandemic. At that time, people were consolidating purchases into fewer trips, going to the grocery store as infrequently as possible to avoid exposure. Moreover, supply chain issues left shelves depleted, so consumers stocked up on goods because they didn’t know when they’d see staple items like flour in stock again. Now, consumers are instead purchasing the necessities and waiting for sales or their next paycheck to purchase any item that won’t be used before their next trip.

Food insecurity is on the rise, driven by high prices

Increasing prices are not only resulting in consumers purchasing fewer items, but also contributing to growing food insecurity among Americans. As shoppers buy less to save money, the share saying they are often or sometimes worried that their food will run out before they have enough money to buy more increased from 35% last October to 42% in September 2022. This sentiment is particularly prevalent among millennials, urban consumers and those making less than $50,000 annually. Roughly half of consumers in each of these groups said that in the past month they were at least sometimes worried their food would run out.

With rising grocery prices showing no signs of slowing down, people will look to food & beverage companies for support and solutions, especially regarding food insecurity. Unfortunately, manufacturers are still grappling with volatile input costs, from gas to ingredients to labor. The unrelenting price increases are forcing shoppers to evaluate their spending, with many buying only those items they deem necessary for a given trip. On the plus side, reduced demand from consumers limiting their purchases should eventually rein in rising prices.