Liz Truss’ successor will inherit a country concerned about economic stability in the wake of the mini-budget misfire, and will be at pains to restore public trust 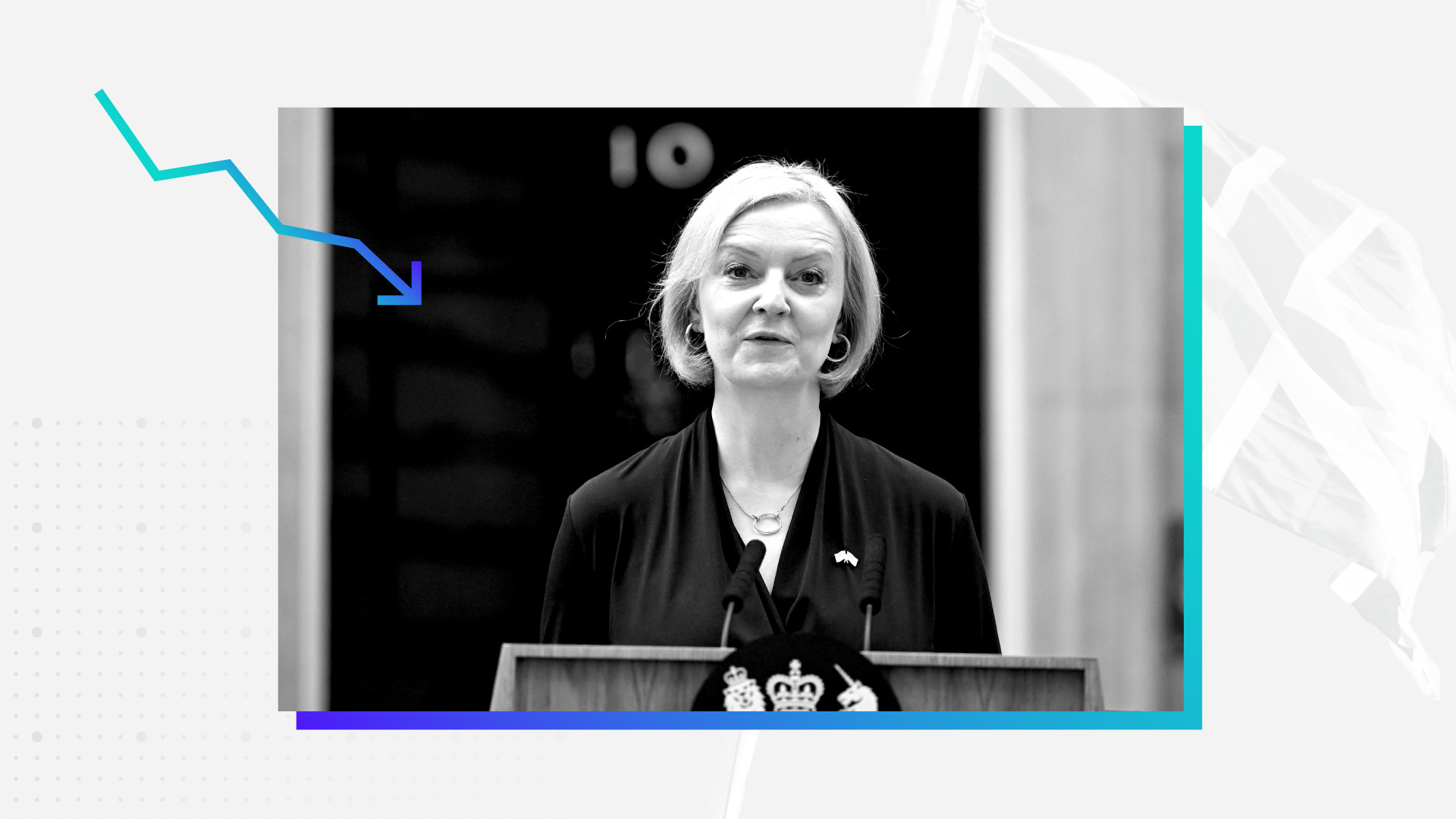 A Complete Lack of Truss

It’s official: Liz Truss will be the United Kingdom’s shortest-serving prime minister, having announced her resignation after a mere 44 days in office. Truss took office on Sept. 8 of this year, after Boris Johnson resigned in a fog of scandal under pressure from his own party. With Truss’ approval rating already underwater when she assumed the premiership, it soon dropped to truly gloomy lows, last clocking in at 11%, the lowest approval rating we have ever recorded for any leader.

The pound rebounded somewhat on news of her resignation. But public trust in the government’s ability to manage the economy amid a series of global crises may take longer to bounce back. Between the end of August and early October, the share of adults in the United Kingdom who believe the country is economically unstable has seen its largest month-over-month increase in two years at 9.4 percentage points.

The share of U.K. adults who agree that the country is economically stable

Survey conducted monthly among a representative sample of roughly 1,000 U.K. adults, with an unweighted margin of error of +/-3 percentage points. “Don’t know/No opinion” responses not shown.

There are a number of global headwinds to economic stability. Rapid inflation is driving central banks to raise interest rates, in turn elevating borrowing costs, heightening rollover risk in some markets and precipitating a flight to the relative safety of the dollar. In Europe, record energy prices and geopolitical risk stemming from Russia’s invasion of Ukraine have stoked Europeans’ recession fears. But even when looking at nine other major markets — both in Europe and elsewhere — the increase in the share of U.K. adults who said in the last month that the country is economically unstable is remarkable: The greatest increase observed in another country in this group is only 6.2 percentage points (South Korea). And the share of concerned U.K. adults is now second only to Italians.

Shares of adults who agree that their country is economically stable 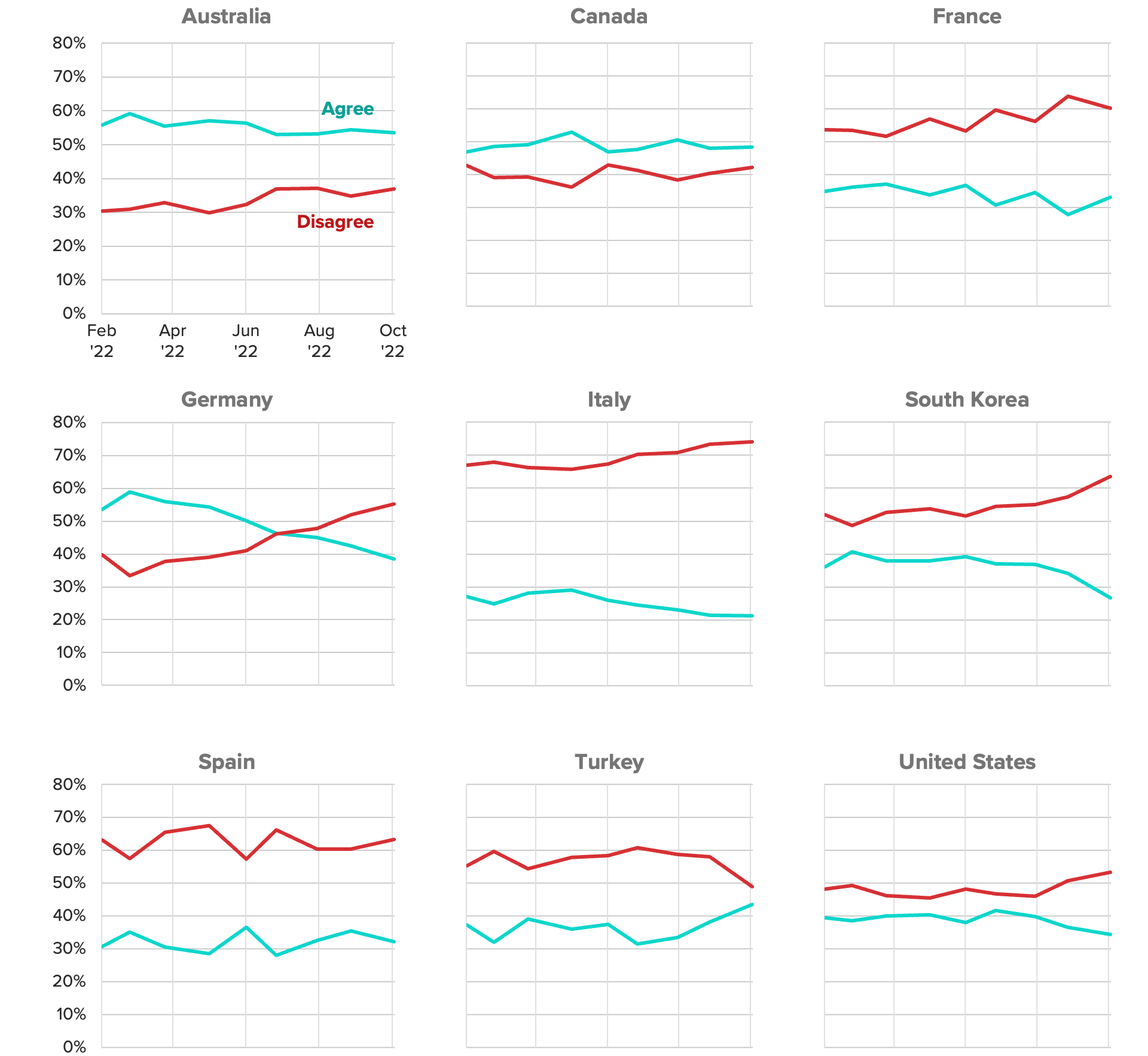 Along with her then-Chancellor of the Exchequer Kwasi Kwarteng, Truss embarked on an ambitious fiscal plan with 45 billion pounds ($50.5 billion) of unfunded tax cuts and 60 billion pounds in expanded energy support to households. The so-called mini-budget spooked financial markets, leading to a nosedive of the pound against the dollar and a spike in yields on long-term government debt.

Faced with an astounding market backlash, Truss sacked Kwarteng and backpedaled on the mini-budget in early October. But the damage to the government’s credibility was already done. U.K. adults who said they had heard “a lot” about the mini-budget were even more likely than the general population to doubt the country’s economic stability. Lest one think this well-informed group consists primarily of the Tories’ political opponents — who have historically been less enthusiastic about the Conservatives’ pro-market ideology — this same segment was also slightly more likely to say that the government overregulates companies at 41% versus 37% for those less informed, suggesting a fair amount of rancor directed at Truss among the Tories themselves.

Truss’ fiscal policies spooked not only markets, but also the British populace. This comes at a time when consumer attitudes, including inflation expectations, risk becoming self-fulfilling prophecies that drive future economic conditions in the wrong direction. Amid historically low public support for the Conservative Party, it will be especially important for Truss’ successor to convince the public that he or she is responding meaningfully to global headwinds and managing the economy the United Kingdom has, rather than the economy the prime minister wishes it had.