The share of voters who “strongly support” a ban on stock trading among members of Congress has climbed 5 percentage points since January, following fresh reports of possible insider trading 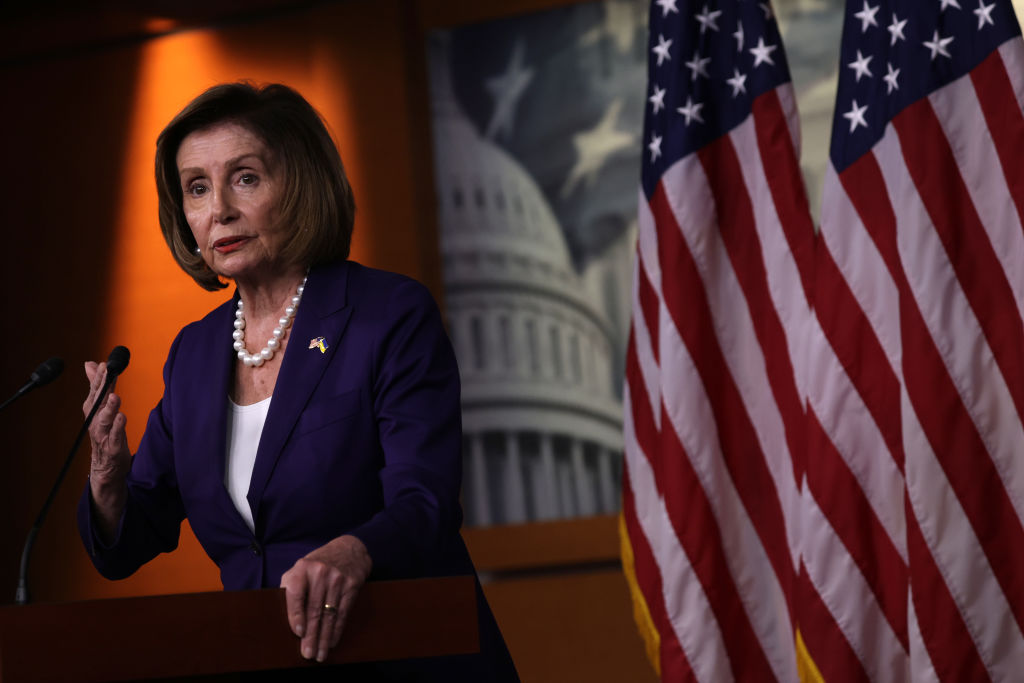 House Speaker Nancy Pelosi (D-Calif.) holds her weekly news conference at the Capitol on Sept. 30, 2022, in Washington, D.C. A Morning Consult/Politico survey found that 68% of registered voters support a ban on stock trading by members of Congress. Pelosi has faced criticism for holding up legislation on a stock ban, which she says lacks the necessary votes to pass. (Alex Wong/Getty Images)
By Amanda Jacobson Snyder

As another series of news investigations reveal that members of Congress and leaders at federal agencies have engaged in trading stocks while simultaneously working on issues that could affect those stocks’ prices, about 2 in 3 voters would support a ban on stock trading by officials throughout the government, a new Morning Consult/Politico survey finds.

Voters were asked if they support or oppose a ban on stock trading for the following individuals:

Survey conducted Oct. 21-23, 2022, among a representative sample of 2,005 registered voters, with an unweighted margin of error of +/-2 percentage points. Figures may not add up to 100% due to rounding.

As more potential conflicts of interest come to light, survey finds an uptick in voters who support stock trading bans for government officials

Amid a steady stream of investigations that hint at the potential for insider trading by federal officials, the pressure is on lawmakers to take action on a bill released in September that would ban members of Congress, their spouses and dependent children, Supreme Court justices and other officials from owning or trading individual stocks and from owning cryptocurrencies.

A recent investigation by The Wall Street Journal found that nearly 2,600 government employees at 50 agencies reported buying or selling the stock of companies in industries that could have been affected by their policymaking.

The newspaper also found suspiciously well-timed trades by employees at agencies connected to the COVID-19 response at the onset of the pandemic. And a New York Times analysis published in September found that 97 current lawmakers or members of their families reported stocks or other financial asset transactions between 2019 and 2021 involving companies or industries that could be affected by their work on legislative committees.

Ethical issues have also reappeared at the central bank, as Federal Reserve Bank of Atlanta President Raphael Bostic was forced to revise his financial disclosures since 2017 after his financial advisers inadvertently made trades during the blackout periods around the Fed’s policy meetings. Bostic’s admission follows the resignation of two central bank heads roughly a year earlier, who left their posts amid scrutiny over disclosed trades.

While lawmakers have defended the trades as technically legal and proper, the timing of such transactions has raised questions about conflicts of interest, including whether current disclosure rules offer adequate transparency and if the current penalties provide any sort of deterrence.

Proposed legislation to ban stock trading, meanwhile, is languishing in Congress while Democrats and Republicans spar over how to reconcile the language, and House Speaker Nancy Pelosi (D-Calif.) has come under fire among members of her party for holding up progress. Though some Democrats are furious that the bill will not come up for a vote prior to the November midterm elections, Pelosi has said the trading ban lacks the votes needed to move forward.

The latest Morning Consult/Politico survey was conducted Oct. 21-23, 2022, among a representative sample of 2,005 registered voters, with an unweighted margin of error of plus or minus 2 percentage points.