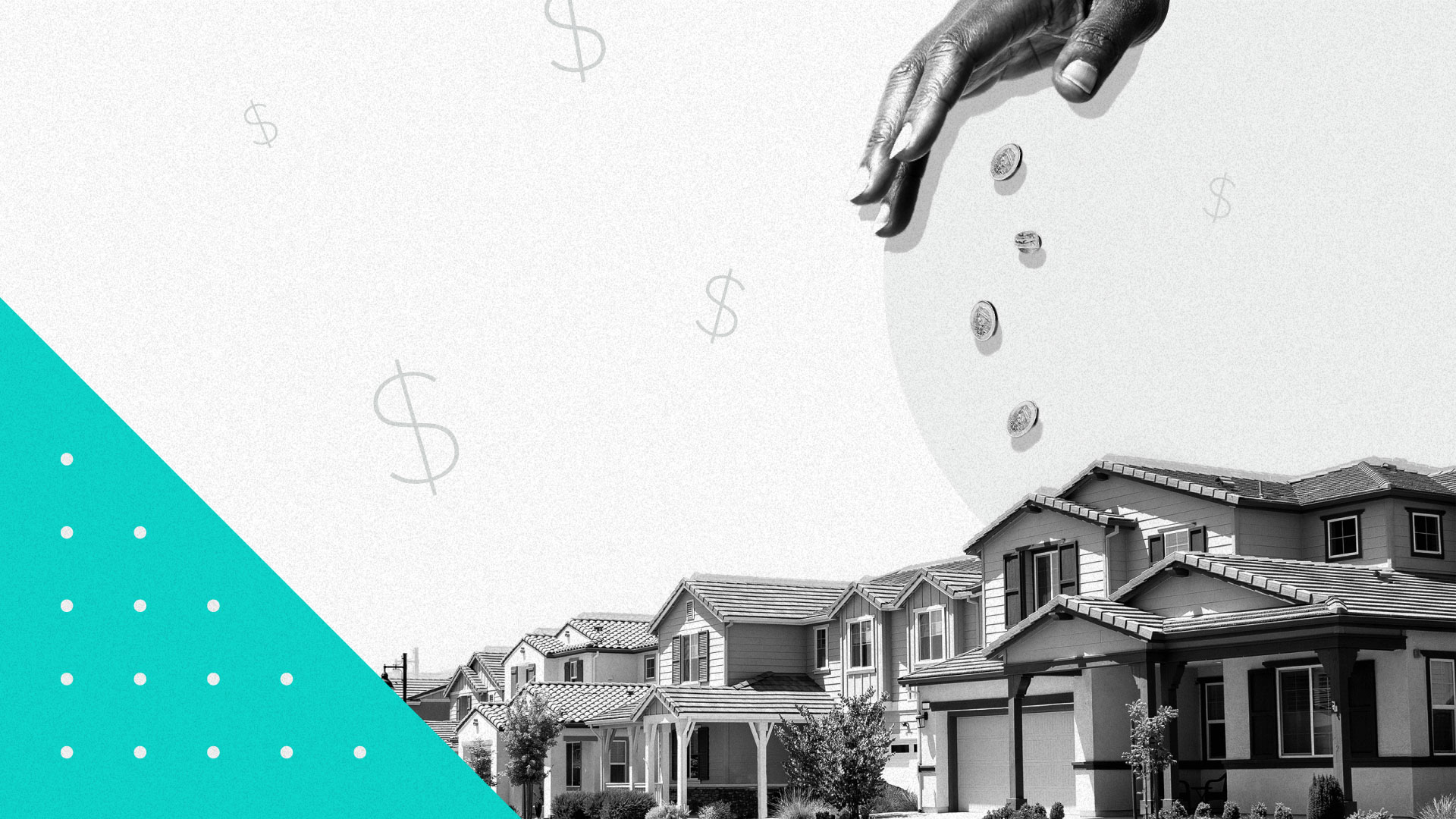 Americans across generations have an enduring desire to own their own home, but high prices driven by a persistent lack of supply have a large share of would-be homeowners doubtful of their ability to make the dream of homeownership come true.

As mortgage rates reach their highest levels in decades, a new Morning Consult survey indicates that consumers are uncertain not only about their ability to afford a home, but about the financial risks associated with owning and maintaining one.

In the survey, just 22% of those who could potentially buy a home expressed confidence in their ability to do so without financial hardship.

Respondents were asked if they agree with the following statements: 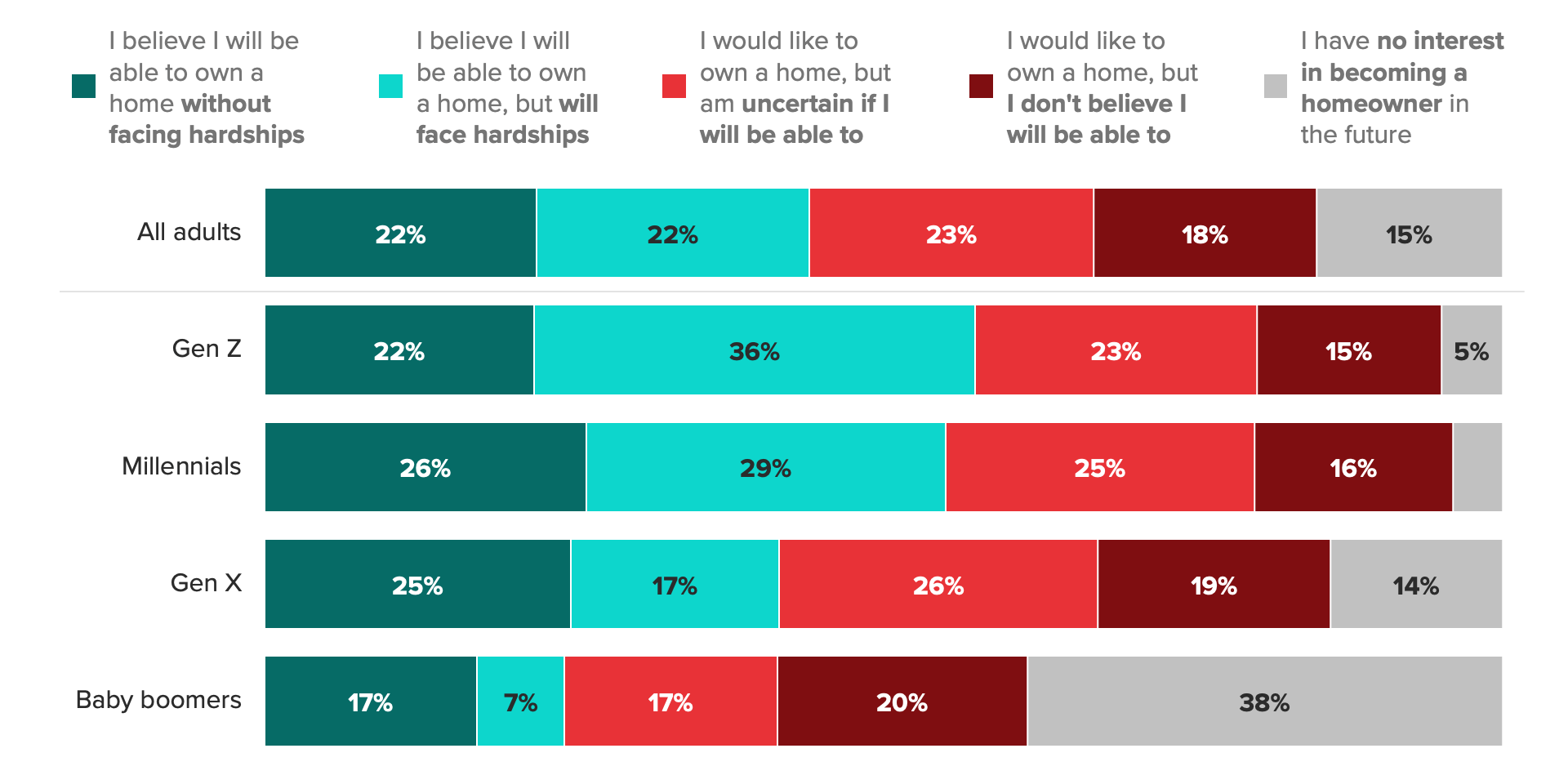 Prospective buyers are faced with a triple whammy of high rent costs that can inhibit saving for a down payment, high mortgage rates and low supply.

Buzz Roberts, president and chief executive of the National Association of Affordable Housing Lenders, said he thinks the biggest challenge in the market is low supply.

“There just aren’t enough homes,” he said, which in turn has driven up prices for real estate and rent. Moreover, he noted that the high mortgage rate environment discourages homeowners who currently have lower rates from listing their homes for sale, exacerbating the supply issue even further.

Respondents were asked whether each of the following was a major reason why they don’t own a home: 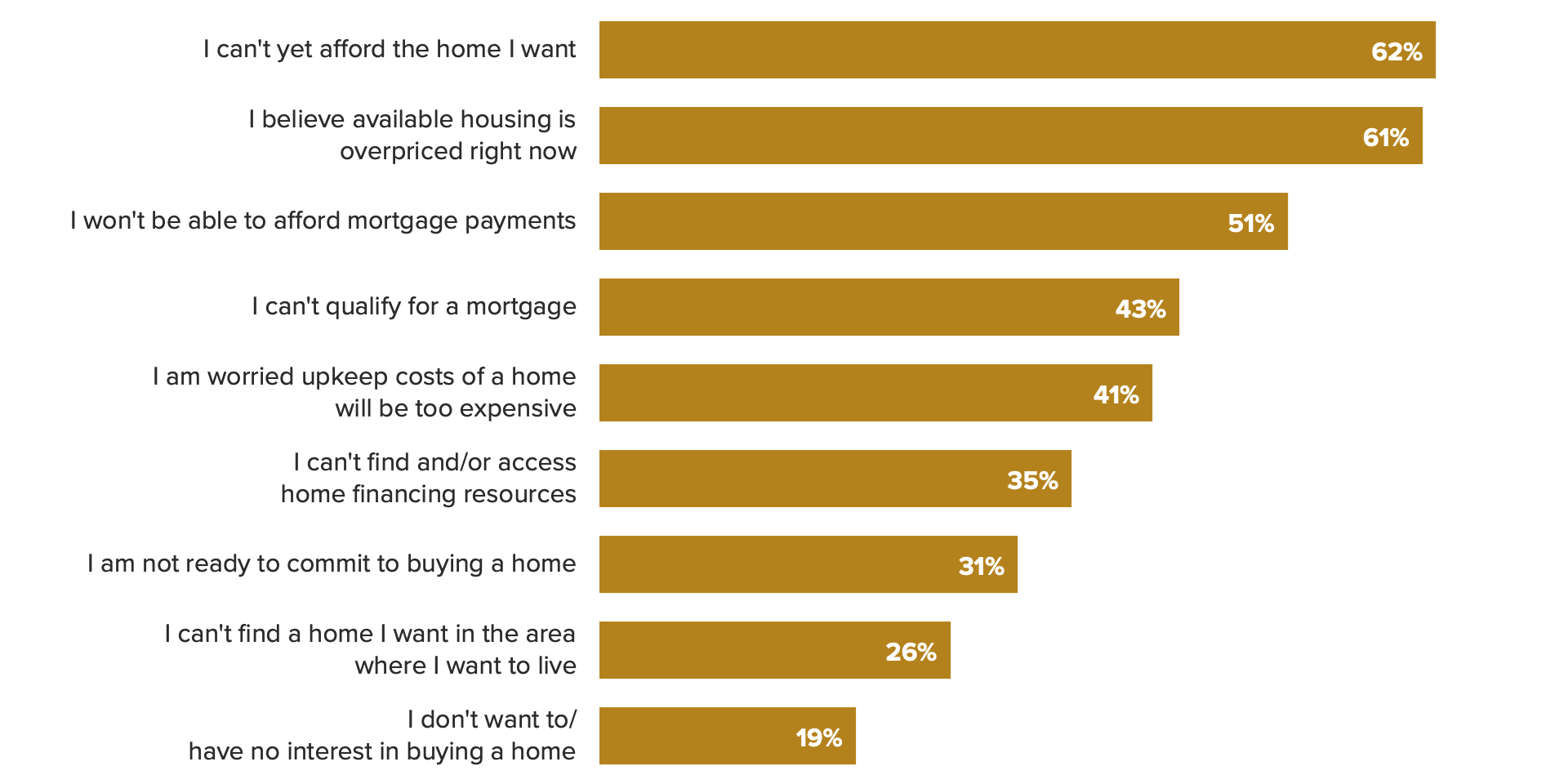 Andy Winkler, director of the housing and infrastructure project at the Bipartisan Policy Center, concurred that skyrocketing prices are being driven by a “fundamental” shortage and the number of homes available for both rent and sale.

The housing shortage will only get worse in the near term as single-family home production is expected to decline 14% in 2022, according to Rose Quint, an economist and assistant vice president for survey research at the National Association of Home Builders. Quint said that while high prices may be keeping some out of the market, there are still bidding wars among the remaining buyers, especially for more wealthy consumers who are less affected by interest rates or for the cohort of buyers with pent-up demand who are “now swooping in as there’s less competition.”

The public looks to homeownership for stability

Roberts said the results point to an overall sense of financial insecurity among the public. “The idea of homeownership gives them more sense of control,” he said of renters.

While the survey finds that potential homeowners now long for the stability and control that ownership offers, they also indicated views that owning a home is a financial risk, with younger generations slightly more wary about the risks associated with buying a home.

Winkler pointed out that for many, a home is the largest purchase they will ever make, and potential homeowners may be plagued by uncertainty about where the economy is heading.

“Are prices going to keep increasing? Are they leveling out? Are rates going to be higher? Is my home going to maintain its value or fall one day? You know there are just so many things, I think people are really starting to get a little bit worried and are hesitant” to make a big purchase like that, he said.

Majority of Adults View Homeownership as a Financial Risk

Respondents were asked if they agree with the following: 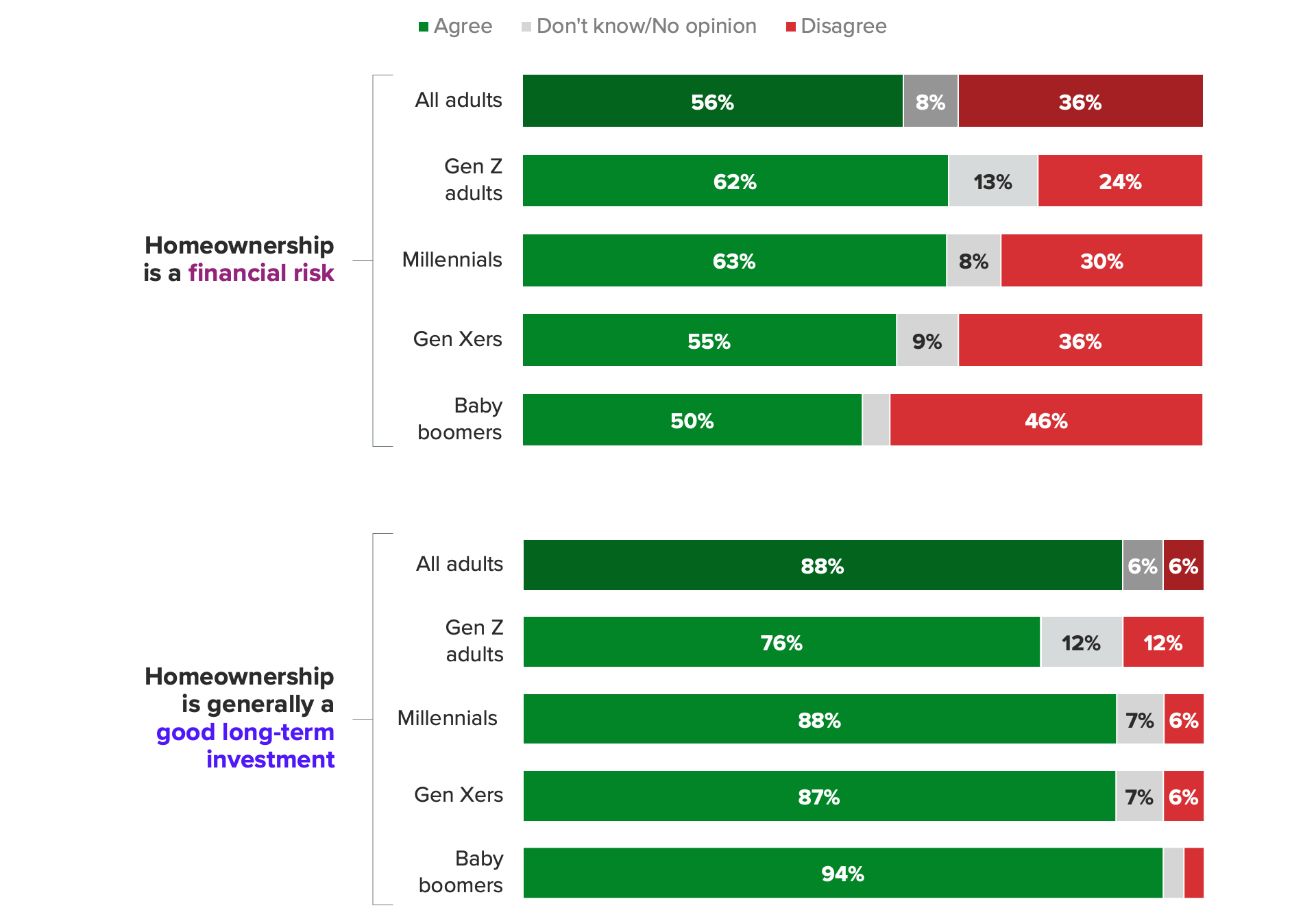 Current homeowners also indicated dissatisfaction around the costs of homeownership: 22% said they believe they are paying too much for their mortgage, though they were far more likely to say costs such as utilities (53%), property taxes (52%) and insurance (46%) were excessive.

Economic threats also appear to be dimming views on homeownership: As jobless claims begin to tick up and the threat of a recession looms, adults overall were most likely to say the threat of losing income was a major financial risk associated with owning a home.

Respondents were asked to what extent they believe that each of the following is a financial risk associated with homeownership: 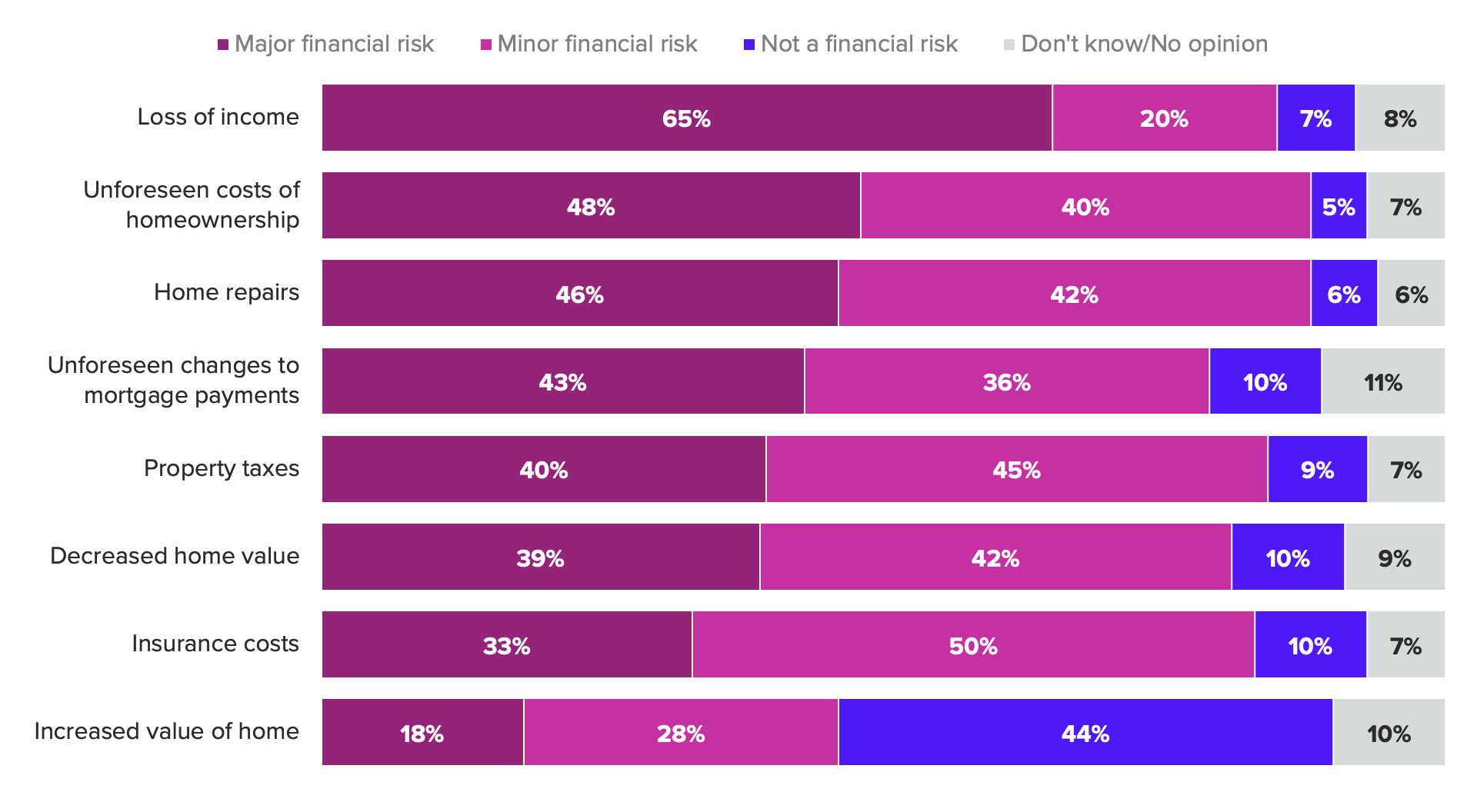 Both Winkler and Roberts said there is momentum and bipartisan support for policy solutions to improve housing affordability, as lawmakers hear more concern from constituents about housing issues in their communities. An expansion of the Low-Income Housing Tax Credit, which incentivizes developers to increase affordable rental housing supply, and the Neighborhood Homes Investment Act, which would support the construction and rehabilitation of homes in distressed communities, could be passed by year-end.

But even if legislation moves forward, increasing homeownership rates is a complex problem, often driven by local regulations or “not in my back yard” opposition. Legal wrangling over zoning or other siting regulations can not only prohibit adding housing supply, but also add to the cost of housing overall. Quint said the NAHB estimates that regulation at the state, federal and local levels represents 24% of the price of a single-family home.

Winkler said that the “hard part of working on housing is there’s no silver bullet, there’s no single idea that is transformative in this space. We have to start to foster a culture of being pro-housing, you know, as goofy as that sounds. More people need to see the value of building additional housing in their communities, and having a range of options for families at different points in their life.”