Netflix’s Ad Tier Is No Cure-All, but That’s Okay 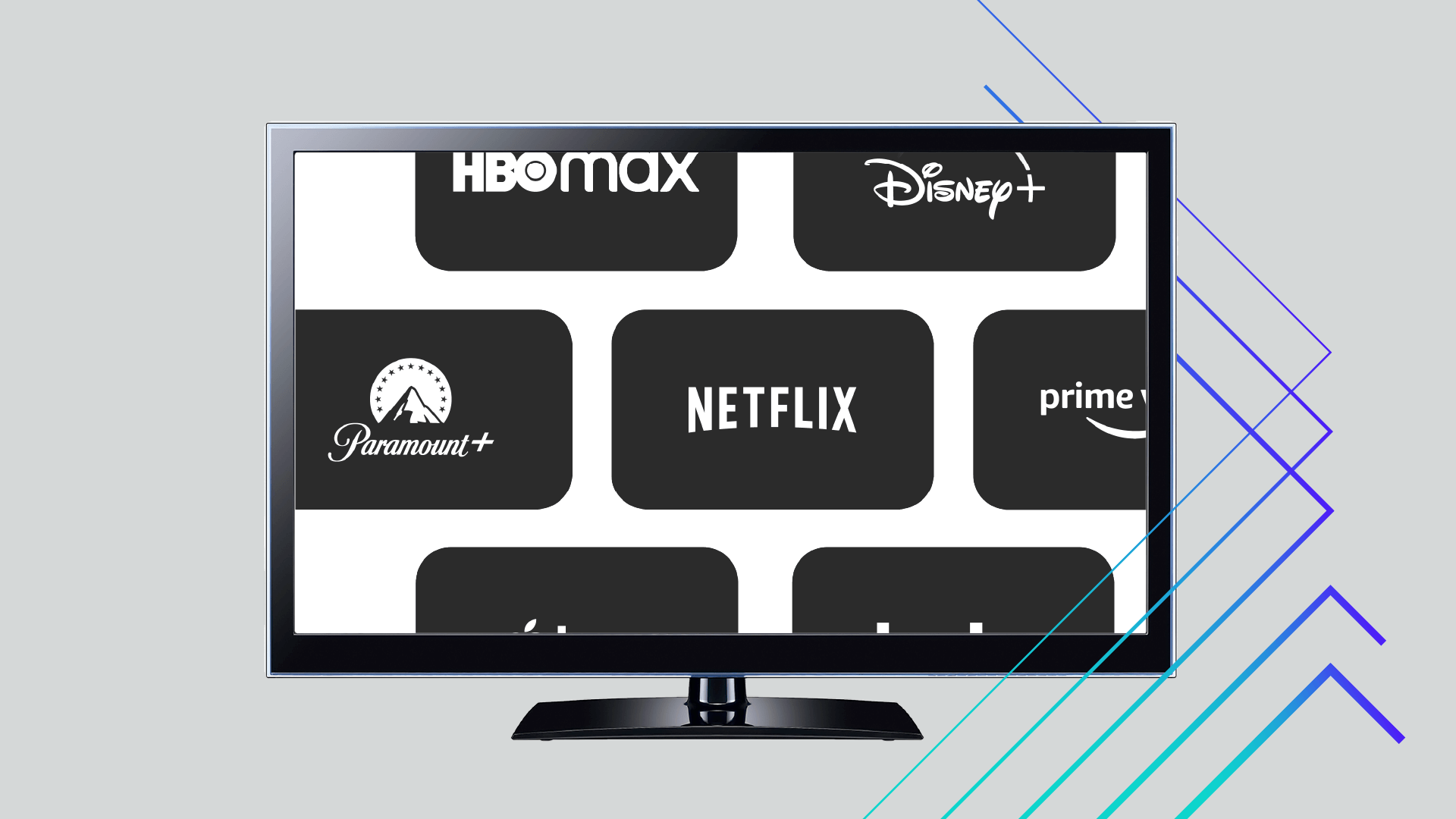 Netflix’s lower-priced ad tier will help it continue its upward trajectory — it’s now far better positioned to monetize current video streaming nonsubscribers, rather than just stealing subscription share from other streamers. However, Netflix and the broader streaming landscape need to more heavily consider diversifying revenue streams beyond subscription and advertising, because growth can only be meaningfully accelerated by inexpensive ad tiers for so long.

​​This is part of Morning Consult’s upcoming “Streaming or Struggling?” report, which takes a look at current consumer streaming behavior and analyzes the best way for services to grow in the saturated streaming market. It was published Oct. 25.

On Nov. 3, Netflix is doing what was once thought to be unthinkable: launching a lower-priced, ad-supported tier. The arrival is timely, given the need to compete with recent and upcoming lower-priced alternatives, such as Disney+’s forthcoming $7.99/month ad-supported tier. Becoming more competitive is imperative for Netflix, which needs to prove that its strong Q3 subscriber results herald the reversal of misfortunes after the company lost subscribers globally for the first time in over a decade during the first quarter of the year.

But the bigger concern amid the streaming giant’s venture into ad-supported territory is still the existential question of whether the streaming market is much closer to its ceiling than initially thought.

Fortunately for Netflix, the ad-supported tier will likely monetize a new segment of consumers: New research from Morning Consult shows price, rather than a perceived lack of content selections, was by far cited most often as a major reason for not paying for any video streaming subscriptions. Therefore, it stands to reason that there are currently consumers who don’t pay for any subscriptions such as Netflix — the lowest tier of which currently costs $9.99/month in the United States — but would be open to doing so for a lower fee.

Share of U.S. adults in August who don’t pay for video streaming subscriptions and said each of the following is a major reason why they don’t: 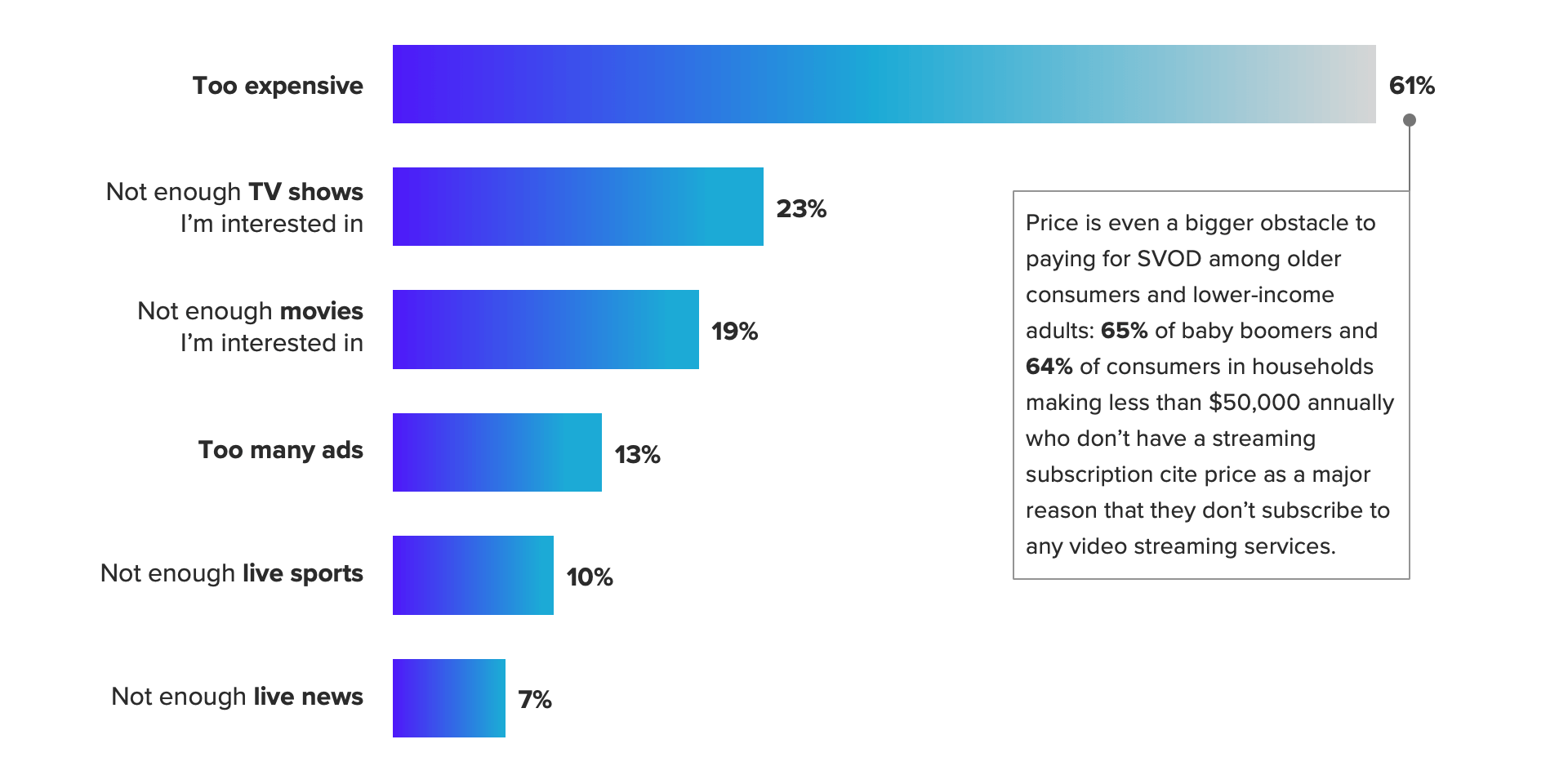 In addition to helping Netflix reach new consumers, the ad-supported tier will also help the streaming giant retain customers who might have otherwise canceled. Those impacted by Netflix’s imminent crackdown on password sharing will soon have a relatively inexpensive way to retain access with the company’s upcoming ad tier.

This retention should be particularly effective among younger demos. Morning Consult data shows that younger cohorts are more likely than their older counterparts to say they have already switched over to a service’s lower-cost ad-supported plan in the last 12 months, which makes sense given their higher price sensitivities.

For example, younger cohorts are more likely than older groups to be concerned about inflation’s impact on entertainment subscriptions and to say that they’ve made a recent effort to save on these subscriptions due to inflation, per September data.

Improving retention, or lowering churn rate, remains key for Netflix, which still stands at a loss in terms of net subscriber additions for the first nine months of 2022 in all of the areas in which it operates for, except for the Asia-Pacific region.

So it’s imperative for Netflix to have a lower-priced, ad-supported tier in order to capture consumers who might otherwise cancel the service amid future price increases for its ad-free tier. After all, Morning Consult previously pointed out in March research that majorities across every major demo prefer low-costing or free ad-supported services over higher-priced, ad-free services.

When taking into account the ad tier, the password-sharing initiative and new installments of big-budget, globally viewed titles such as “The Witcher” and “Extraction” coming in 2023, Netflix appears well-positioned to continue last quarter’s upward trajectory into next year.

As for streaming’s true ceiling, Netflix is still probably nowhere near the end of its growth journey, considering the streamer’s 220 million-plus global subscriptions and using the world’s 1 billion-plus broadband households as a rough limit. And Netflix’s growth ceiling signals how much opportunity remains for less mature streamers such as Disney+.

But the novelty of Netflix’s ad tier will eventually wear off: Once bundling (Peacock has shown interest in bundling with streamers such as HBO Max) and outright merging of services (HBO Max and Discovery+ are combining into one service next year, and the same could eventually happen for Disney+ and Hulu) become more common, Netflix’s $6.99 price tag will no longer feel like a steal.

But fixating on the progressive difficulty of maintaining or accelerating subscriber growth misses the point. As video streaming operations mature, investors will increasingly demand profitability, for which subscriber growth is an imperfect proxy: For example, average revenue per user was $1.20 for nearly 38% of the 152 million global subscribers that Disney+ reported as of July, much lower than the $6+ in ARPU that the remainder of Disney+ subs generate. It’s the reason why Netflix said in its latest earnings call that it will stop providing internal subscriber forecasts next year in favor of placing an increased emphasis on its revenue growth.

The growing focus on revenue may eventually incentivize Netflix to more seriously consider reversals on other long-held stances, such as its refusal to license out original content to other platforms in a significant way and its reluctance to consider wide theatrical releases.

The potential to unlock meaningful revenue through decisions like these underscores why Netflix will be okay even if its ad tier isn’t a cure-all. Netflix’s competitors, who don’t necessarily have these specific growth levers to pull, need to start zooming out to consider the various ways they can monetize beyond subscriptions and ads once their lower-priced ad tiers are viewed more as table stakes.

Related: Apple TV+’s Prestige Push Isn’t Getting Its Due Respect