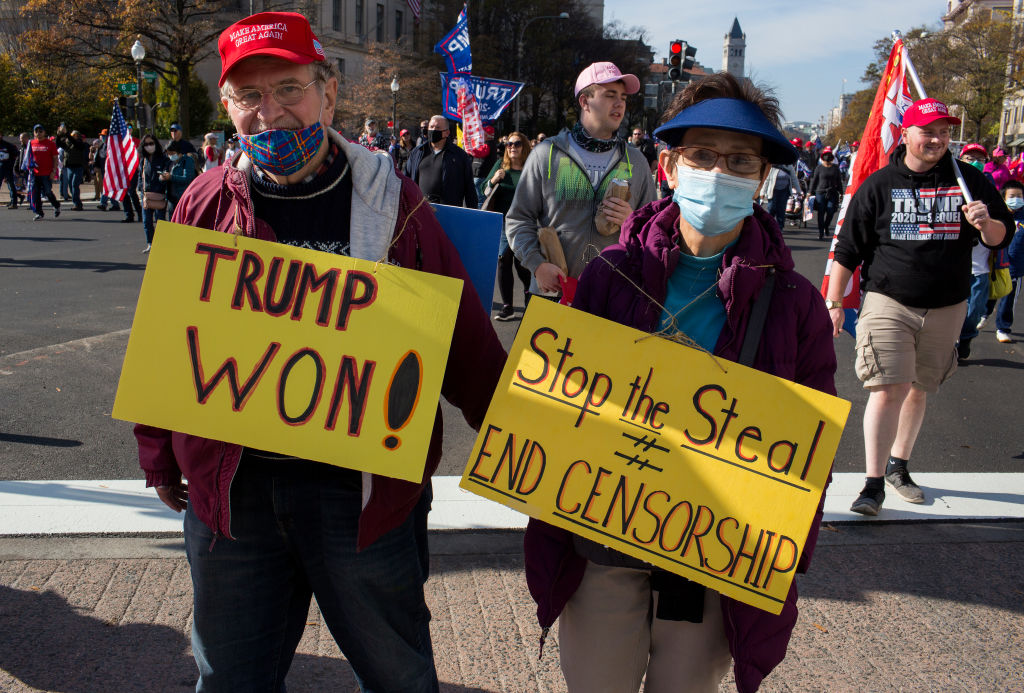 Tens of thousands of Trump supporters rally and march in Washington, D.C., in November 2020 to declare the 2020 presidential election results a fraud. (Andrew Lichtenstein/Corbis via Getty Images)
By Eli Yokley

Republican voters remain skeptical about the freedom and fairness at play in the 2022 midterm elections. But as the GOP’s odds of regaining control of Capitol Hill have improved heading into Election Day, Morning Consult surveys reveal increasing trust on the right for the American electoral system.

Surveys conducted in 2022 among representative samples of roughly 2,000 registered voters each, with unweighted margins of error from +/-3% to 4% for responses shown.

Which voters think 2022 will be free and fair

What’s weighing on voters’ trust in the election system

President Joe Biden has cast the midterms as a referendum on democracy, highlighting concerns about Republican candidates who deny or question the legitimacy of his 2020 victory being elevated to positions of authority over electoral institutions, from members of Congress to statewide officials such as governors or secretaries of state.

Those Republican candidates’ reluctance to acknowledge the 2020 outcome aligns with most of the Republican electorate, 62% of whom said in the latest survey they believe the last presidential election was not free and fair — roughly in line with Morning Consult tracking over the past year.

Trump’s loss, and his and his allies’ continued campaign to undermine faith in Biden’s victory, did a number on Republican trust in the 2020 outcome as well as the electoral system itself: When Trump lost, Democratic trust surged and Republican trust tumbled.

It’s a phenomenon the Massachusetts Institute of Technology’s Election Data Science Lab has dubbed the “winner’s effect,” where a voter’s election confidence tracks with whether their party won or lost. The impact on the negative side has been larger among Republicans than Democrats since 2000, but Republicans have seen big boosts after victories such as in 2016, suggesting perceptions of the system’s legitimacy on the right may be set to improve further if the GOP can notch victories in the midterm contests.

Trust in Elections Is Increasing on Both Sides of the Aisle

Shares of U.S. adults who said they had “some” or “a lot” of trust in the U.S. electoral system

Surveys conducted among representative samples of roughly 2,000 U.S. adults each, with unweighted margins of error from +/-3% to 4% for responses shown.

How many Democrats and Republicans trust the U.S. election system