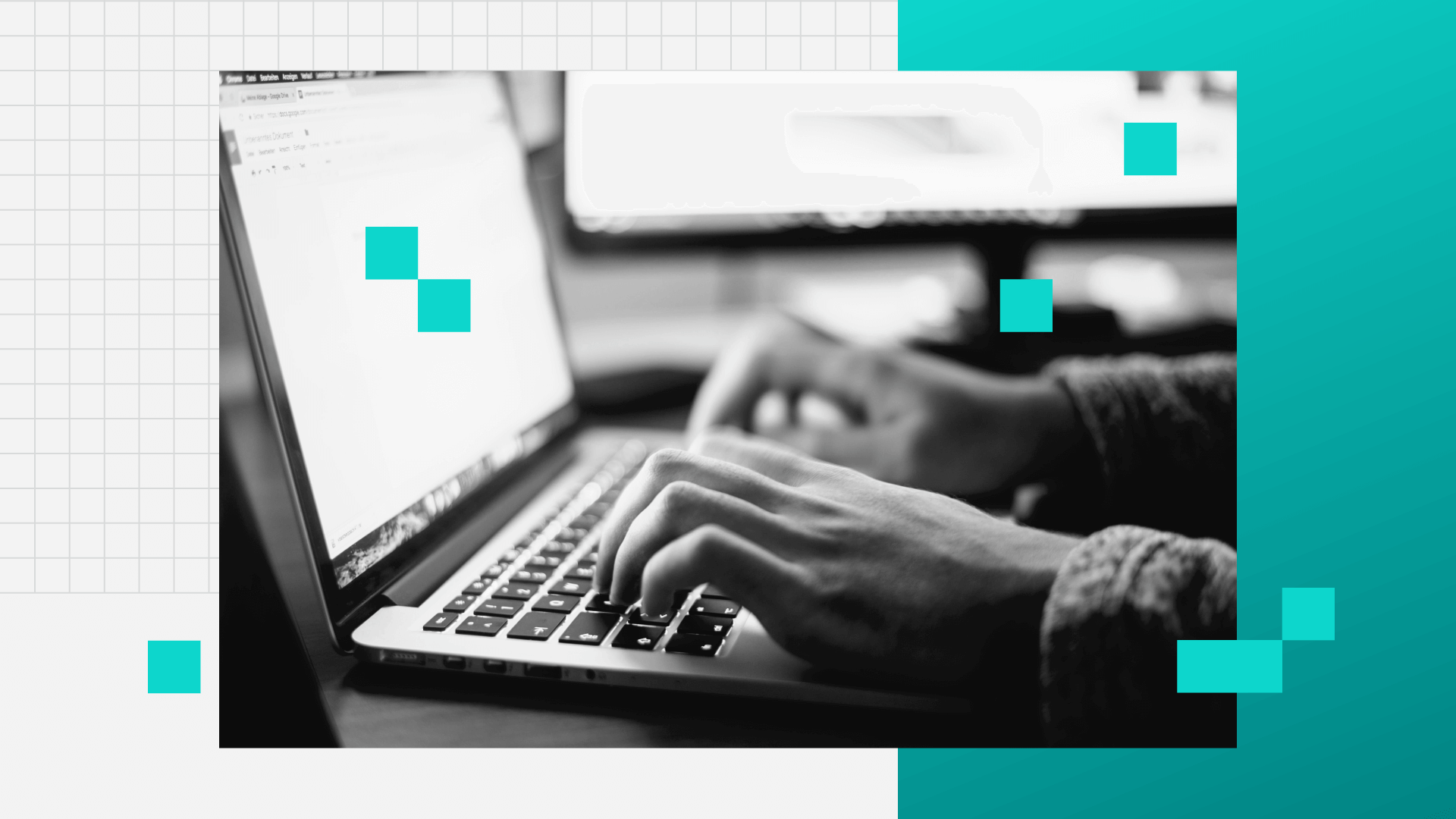 Gen Z’s complex relationship with data privacy differentiates the group from their older counterparts. Certain policies are table stakes for Gen Zers, and they are also more jaded about companies’ mishandling of data, creating a strategic outline for brands looking to plan for the next generation of consumers.

Gen Z has a complicated view of one of the most important issues facing brands today: data privacy.

The topic is already a difficult one: Previous research shows that the term means different things to different people in different settings. Now, further study builds on these nuances, revealing which data privacy policies the next generation will demand of businesses and how they differ from what older consumers expect.

Gen Z came of age during a major moment in data privacy. The global conversation around the topic shifted following the Facebook/Cambridge Analytica scandal in 2018. The incident altered the public’s view of major technology companies from great innovators and drivers of the economy to entities that need more oversight. Massive regulatory efforts like the General Data Protection Regulation in Europe and the California Consumer Privacy Act have since gone into effect, with more on the way, representing a break in consumers’ trust in tech companies to sufficiently safeguard people’s data.

Now, with more protections in place, consumers are coming to expect companies to get data privacy right, and doing good by users in this space is less of a differentiator than it once was.

Around half (52%) of consumers say that keeping data private and secure is a baseline expectation they have of companies, and doing that alone does not make them think better of a company. A third of adults are still willing to give companies more credit, thinking better of brands that get data privacy right. And here is where we see Gen Zers’ first deviation from other generations — despite growing up in a largely digital environment, they are more likely not to voice an opinion on what they expect from companies vis-a-vis data privacy.

Respondents were asked which of the following statements they agree with most: 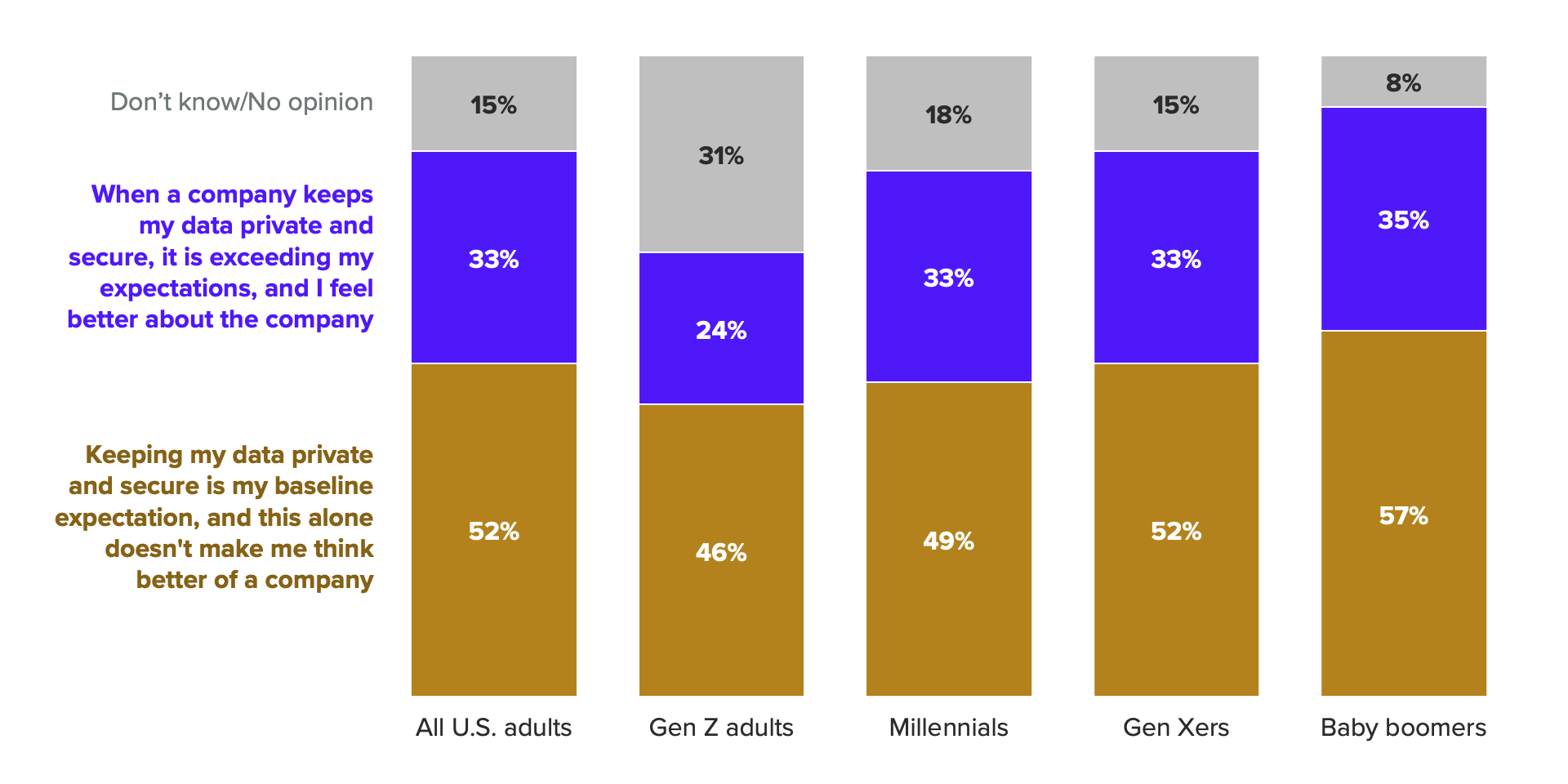 Gen Zers also find it significantly less surprising than older adults when companies do things like give them the option to set an expiration date on the data they collect, list out the information they store or choose not to store data at all.

Furthermore, the youngest generation is more jaded than others on this topic, finding it less surprising if a company stores data in a way that exposes it to a breach or asks for information without explaining what it will be used for.

Shares of respondents who would find it “very” or “somewhat” surprising if a company did the following: 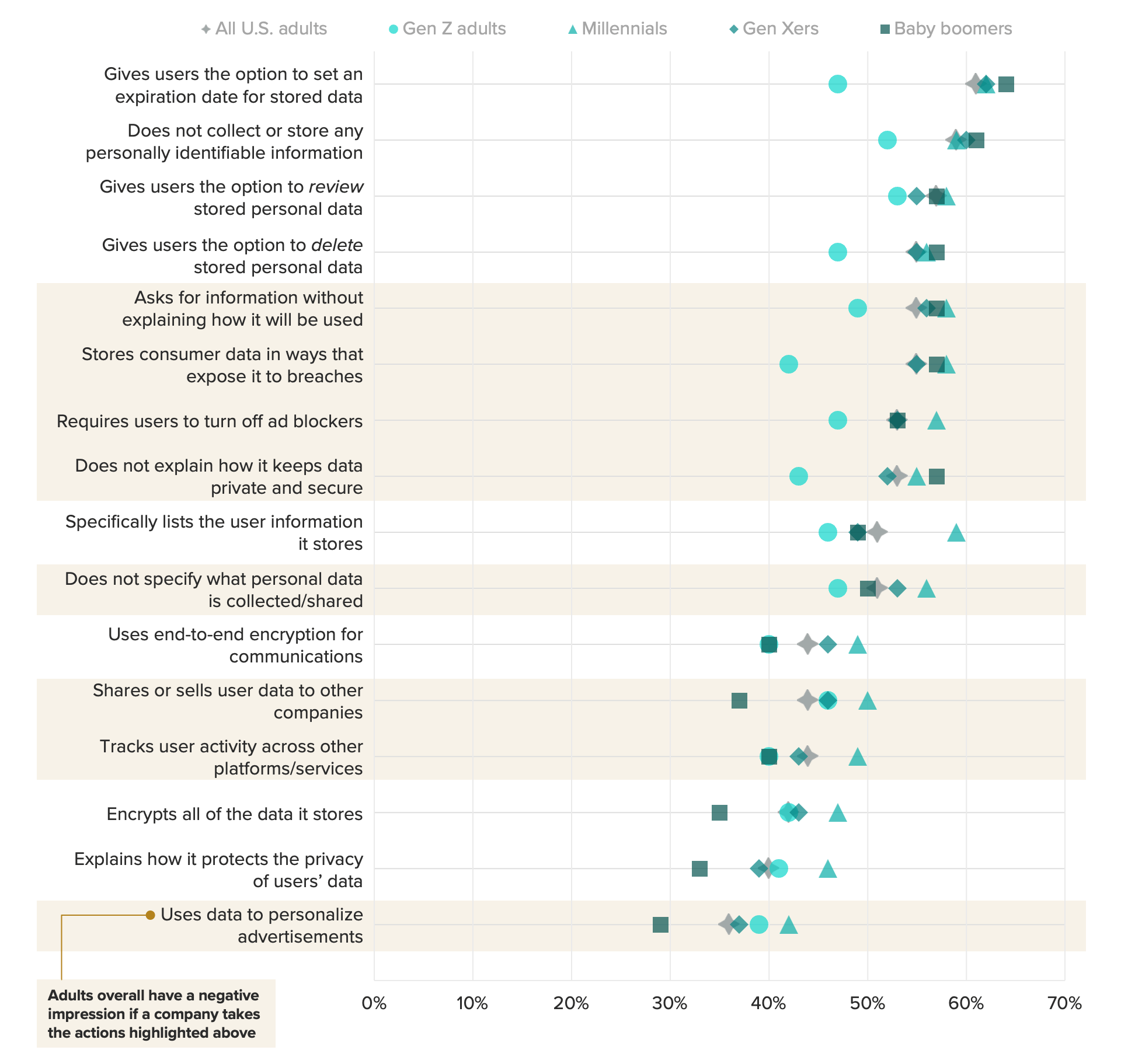 Gen Zers have a significantly less positive impression of companies that take a variety of data protection measures when compared with the overall population, further reinforcing the idea that simply doing these things does not necessarily earn brownie points for brands.

For instance, 70% of all adults said they would have a more positive impression of a company that explains to its users how it protects their data, compared with just 53% of Gen Zers. That being said, previous Morning Consult research shows that transparency and control are the most positive actions companies can take in regard to data protection, and this holds true for Gen Zers too.

Shares of respondents who said they would have a positive impression of a company that did the following: 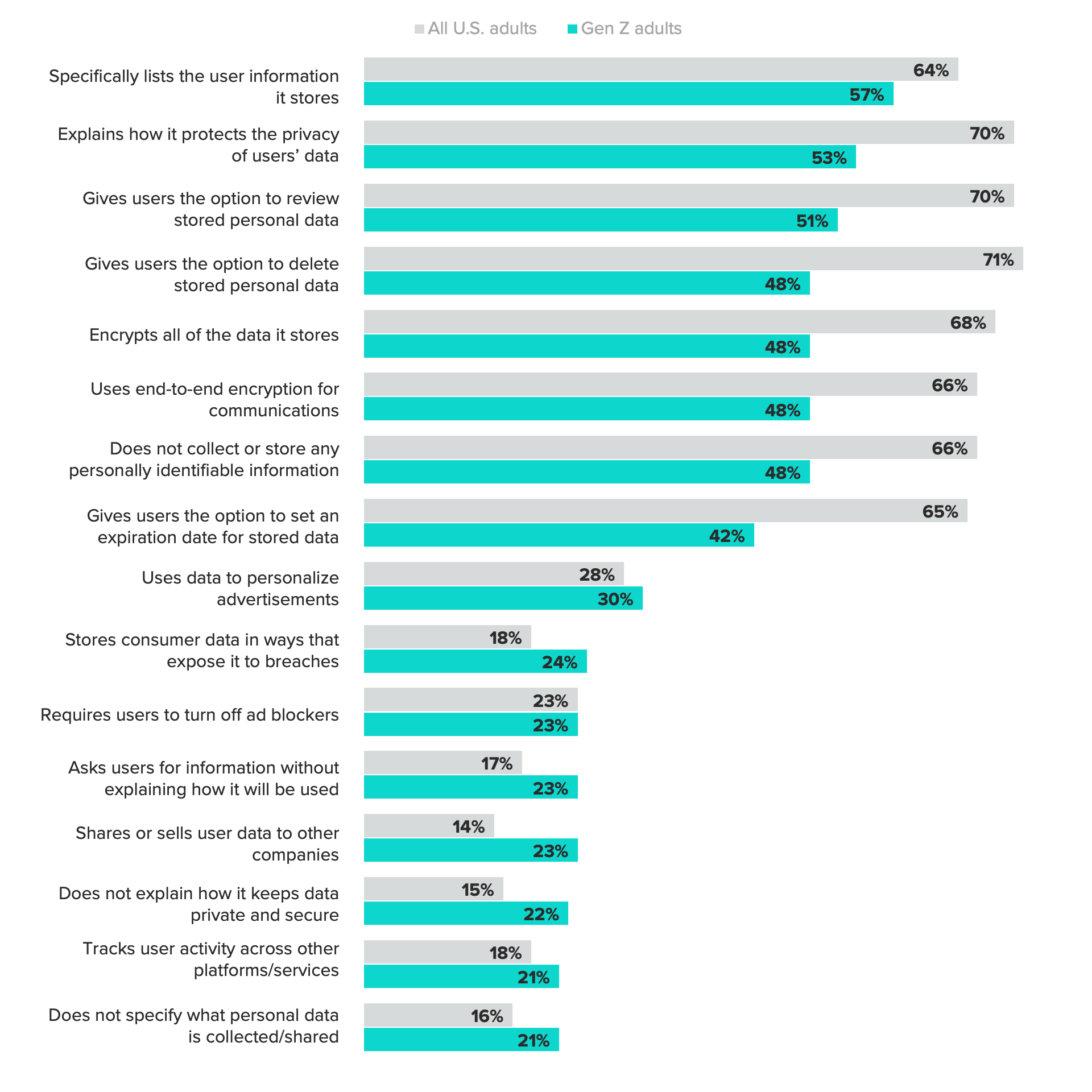 Another factor to consider is that Gen Zers’ attitudes are markedly different from other generations’ in terms of whom they trust to protect the privacy of their data. They’re less likely than the general public to trust financial services companies, online retail companies, search engines, ride-hailing companies and even themselves with protecting their data online.

Although this finding is a bit dizzying given this generation’s concurrence with the Facebook/Cambridge Analytica scandal, remember that Gen Zers aren’t frequent Facebook users and may be less aware of the scandal if it is not as relevant to them. They might not even consider Facebook when thinking of social media companies. Another factor to consider is Gen Zers’ acceptance of, or perhaps resignation to, the fact that companies are going to use their data no matter what.

This is also likely rooted, at least in part, in the dominance of social media apps such as TikTok in Gen Zers’ everyday lives. A recent brand ranking found that TikTok is a standout favorite among Gen Zers when compared with the general public, followed by Discord, Snapchat and Instagram. In the case of TikTok, Gen Zers’ attitudes are especially interesting in the context of the company’s disastrous reputation around data privacy, indicating that at a certain point of brand affection, data privacy concerns become less important — but not every company can be so lucky.

Shares of respondents who said they trust the following “somewhat” or “a lot” to protect the privacy of their online data: 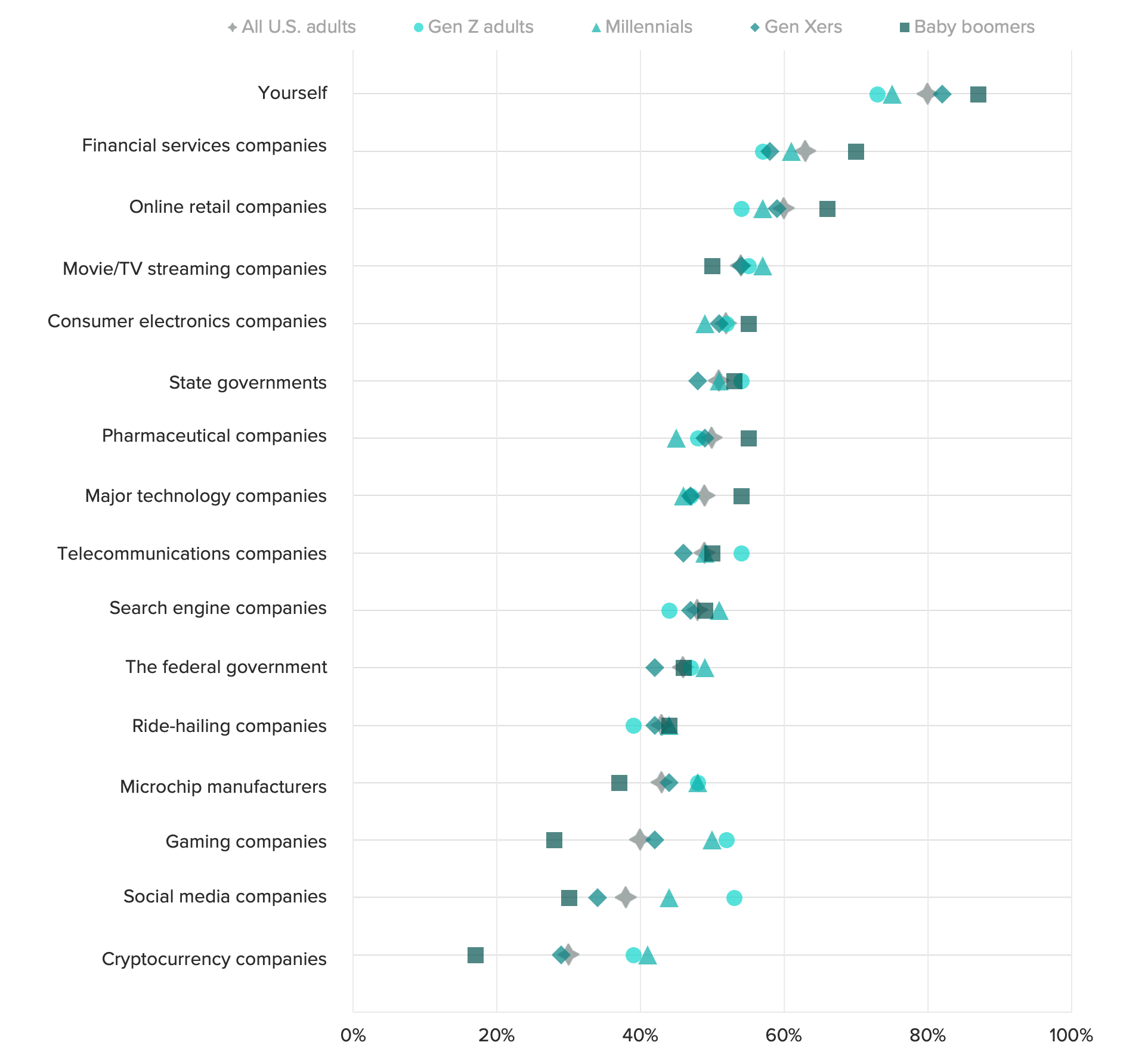 Although complicated, Gen Z’s relationship with data privacy should be a consideration for brands when strategizing their data privacy policies and messaging for the future. Expectations around data privacy are shifting from something that sets companies apart in consumers’ minds to something that people expect the same way one might expect a service or product to work as advertised. For Gen Zers, this takes the form of skepticism that companies will keep their data safe, and their reluctance to give companies credit for getting it right means that good data privacy practices will increasingly be more about maintaining trust than building it.